1. Relationship between AOP and IOC

AOP (Aspect Oriented Programming) is a programming design idea that aims to reduce the coupling between business logics by intercepting business process tangents and implementing specific modularization capabilities. This idea has been practiced in many well-known projects. For example, Spring’s PointCut, gRPC’s Interceptor, and Dubbo’s Filter. aOP is just a concept that has been applied in different scenarios, resulting in different implementations.

For a single RPC process, gRPC provides a user-extendable Interceptor interface that allows developers to write business-related interceptor logic. For example, introducing authentication, service discovery, observability, and other capabilities, there are many extensions based on Interceptor implementations in the gRPC ecosystem, see go-grpc-middleware. These extended implementations belong to the gRPC ecosystem and are limited to the concepts of Client and Server sides, and to RPC scenarios.

We abstract the concrete scenario by referring to Spring.

Spring has a powerful dependency injection capability, on top of which it provides AOP capabilities for adapting and business object methods, allowing interceptors to be encapsulated outside of business functions by defining cutpoints. These concepts of “facets” and “cutpoints” are limited to the Spring framework and managed by its dependency injection (also known as IOC) capabilities.

The point I want to make is that the concept of AOP needs to be grounded in a specific scenario and must be constrained by the ecological constraints from which it is integrated. For example, I can write a series of function calls along the lines of procedural oriented programming, and I can say that this is an implementation of AOP, but it is not scalable, migratable, or generic. This constraint is necessary, can be strong or weak, such as Spring ecological AOP, weaker constraints have greater scalability, but the implementation is relatively complex, the developer needs to learn its ecological concepts and APIs, and if Dubbo, gRPC ecological AOP adapted to RPC scenarios, the developer only needs to implement the interface and a single API injection can be, its ability is relatively The ability is relatively limited. 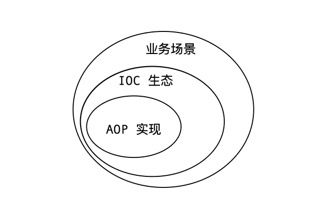 The AOP concept has nothing to do with the language, and while I agree that best practice solutions using AOP require the Java language, I don’t think AOP is exclusive to Java. In the Go ecosystem that I am familiar with, there are still many good projects based on the AOP idea, and the commonality of these projects, as I explained in the previous section, is that they all combine a specific ecosystem to solve a specific business scenario, where the breadth of the solution depends on the binding power of the IOC ecosystem. An IOC ecosystem that does not provide AOP can be very clean and refreshing, while an IOC ecosystem that provides AOP capabilities can be very inclusive and powerful.

Last month I open sourced the IOC-golang service framework, which focuses on solving the dependency injection problem in Go application development. Many developers compare this framework with Google’s open source wire framework and think it is not as clean and easy to use as wire, but the essence of this problem is that the two ecologies are designed for different purposes. wire focuses on IOC rather than AOP, so developers can learn some simple concepts and APIs, use scaffolding and code generation capabilities to quickly implement dependency injection, and have a good development experience. IOC-golang focuses on IOC-based AOP capabilities and embraces this layer of extensibility, viewing AOP capabilities as a point of difference and value between this framework and other IOC frameworks.

Compared to SDKs that solve specific problems, we can consider the IOC capabilities of the dependency injection framework as a “weakly constrained IOC scenario” and compare the differences between the two frameworks to throw light on two core issues.

My view is that the Go ecosystem must need AOP, even in the “weakly constrained IOC scenario”, but still can use AOP to do some business-independent things, such as enhance the application’s operation and maintenance observability. Go does not support annotations, which limits the convenience of developers to use the AOP layer for writing business semantics. I would prefer to give the Go ecosystem an AOP layer with observable capabilities for operations and maintenance, while developers would be impervious to AOP.

For example, the IOC-golang framework can be used to encapsulate the operations AOP layer for any interface implementation structure, thus making all objects of an application observable. In addition, we can also combine RPC scenarios, service governance scenarios, and fault injection scenarios to generate more “operations” domain extension ideas.

There are two ways to implement method proxies in Go: interface proxies via reflection, and function pointer swapping based on Monkey patches. The latter does not rely on interfaces and can encapsulate function proxies for methods of any structure, requires intrusion into the underlying assembly code, turns off compilation optimizations, has CPU architecture requirements, and can significantly degrade performance when handling concurrent requests.

The former makes more sense for production, relies on interfaces, and is the focus of this section.

The objects mentioned in the previous section as “injected into an interface” are encapsulated by the framework as proxies by default, with the ability to run and maintain them, and mention that iocli generates “proprietary interfaces” for all structures. In this section, we explain how the framework encapsulates the proxy layer and how it is injected into the interface.

Understanding the implementation ideas mentioned above, we can assume that all interface objects injected and obtained from the framework in applications developed using the IOC-golang framework are operationally capable. We can extend the capabilities we expect based on the idea of AOP. We provide a simple e-commerce system demo shopping-system, which demonstrates the AOP-based visualization capabilities of IOC-golang in a distributed scenario. Interested developers can refer to the README and run the system in their own clusters to get a feel of its operation and maintenance capabilities base.

AOP layer based on IOC-golang, can provide user-aware, business non-intrusive distributed scenarios full-link tracking capabilities. That is, a system developed by this framework can take any interface method as an entry point to capture the full link of cross-process calls at method granularity. 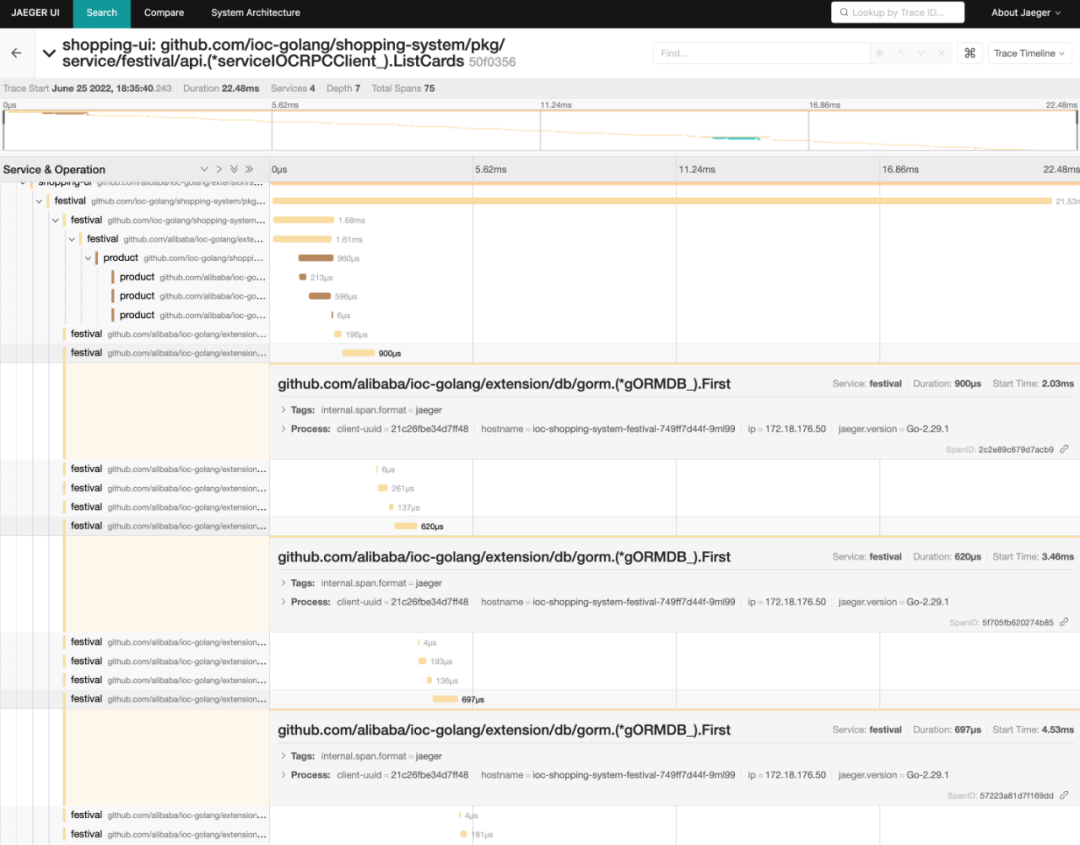 Based on the shopping-system’s full-link time consumption information, the gorm.First() method of the festival process can be identified as the bottleneck of the system.

The implementation of this capability consists of two parts: method granularity link tracing within processes, and RPC call link tracing between processes. IOC aims to create out-of-the-box application development eco-components for developers, and these built-in components and the RPC capabilities provided by the framework are equipped with O&M capabilities.

IOC-golang open source has broken 700 star so far, its hot growth is beyond my imagination, also hope this project can bring more open source value and production value, welcome more and more developers to participate in the discussion and construction of this project.