When writing tests, we all need to start external services such as Redis or Postgres, and we need to initialize the database connection before starting the test, or prepare the test data, and close the database connection after the test is finished, and remove unnecessary test data or files. In Golang, developers don’t need to rely on third-party packages, they can do this very easily with the built-in TestMain. Here’s how to do it and how to use it.

The Go language provides the TestMain function directly in the test suite, which allows developers to prepare the environment (setup) before starting a test or remove it (teardown) after the test is finished. The following is an example of normal execution.

Then you can add the setup() and teardown() functions.

Finally, run go test -v . and you can see the following result.

This is in line with our need to be able to prepare the environment before any test and remove the associated environment afterwards. At the bottom is the initialization of the Groutine Pool and the release of the connection at the end.

In addition to being used before and after the overall test, developers may also need to test sub-testing. See the example below to test for user presence.

Then add the setupTest function.

Let’s integrate the above cases together and write a simple ToString function first.

Then write the test.

The final results are as follows. 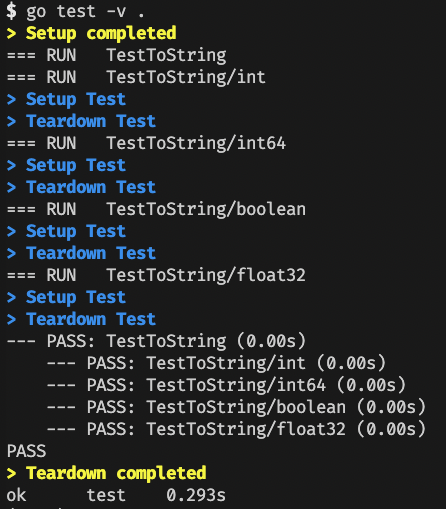