kube-apiserver is the gateway component of kubernetes and is the only entry point for kubernetes cluster resource operations, so some processes such as authentication and authorization are obviously implemented based on this component. kubernetes clusters basically perform all operations through the apiserver component, which provides an API in the form of HTTP RESTful for clients inside and outside the cluster to call. kubernetes provides three steps of security for accessing the API: authentication, authorization, and admission control, which are verified when users request apiserver using kubectl, client-go, or the REST API.

All of kubernetes’ current authentication policies are shown below.

X509 client certs authentication is used for some client access to apiserver and between cluster components, such as when kubectl requests apiserver.

serviceaccounts is used for authentication when accessing apiserver in pods, for example when using custom controllers.

There are cases where we want to access the apiserver from inside the pod to get information about the cluster and even make changes to the cluster. In this case, kubernetes provides a special authentication method: serviceaccounts.

Serviceaccounts are a resource in a kubernetes cluster, just like pods, services, and deployments, and users can create their own serviceaccounts.

After a request is authenticated, the next step is to confirm that the operation is allowed to be performed, i.e. Authorization.

For authorizing a request, Kubernetes focuses on three main aspects.

The username is extracted from the header of the embedded token, the action is one of the HTTP verbs mapped to a CRUD operation (e.g. GET, POST, PUT, DELETE), and the object is one of the valid Kubernetes resource objects.

Kubernetes determines authorization based on a presence policy. By default, Kubernetes follows a closed and open philosophy, which means that an explicit permission policy is required to access resources.

RBAC, or Role-Based Access Control, is a mechanism for customizing roles and associating them with specific user, group, and serviceaccounts for the purpose of privilege control.

There are three important concepts in RBAC.

RBAC actually binds the subject to the role by creating a role through RoleBinding. The following diagram shows several types of binding relationships in RBAC. 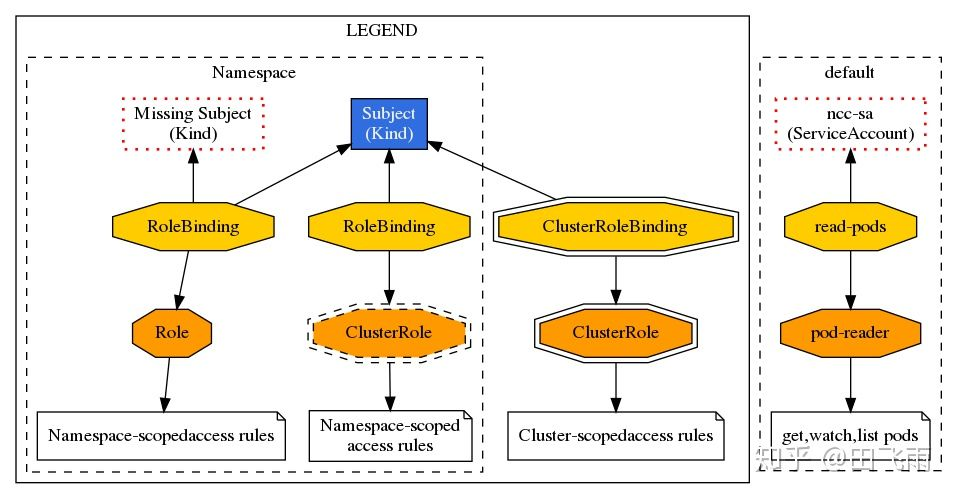 The Admission Controller is a gateway that intercepts API Server requests (authenticated) and can modify the request object or deny the request. In short, it can be thought of as an interceptor, similar to a middleware in a web framework, which is a means for the Kubernetes API Server to intercept requests.

Why did Kubernetes introduce admission as a mechanism?

After the API Server receives the client request, it will first authenticate and authorize the request, and only after the authentication and authorization are passed will it proceed to the subsequent endpoint handler processing. The flow of kube-apiserver processing resource requests is as follows.

As you can see, after Authentication & Authorization, the request is handed over to the Admission Controller for further processing, which involves two important phases of Admission, Mutating and Validating, the differences of which are as follows.