When I was doing PaaS platform development, I was involved in tenant privilege management, and considering that Kubernetes provides RBAC (role-based access control) mechanism by default, I thought how to make good use of RBAC of Kubernetes to achieve it. However, when I started to learn this knowledge, I encountered some problems, such as Role and ClusterRole, Role Binding and ClusterRoleBinding, and many concepts are rather vague.

As we learn more about them and practice, we can sort out the relationship between them. This article is to share what we have learned during this period.

There are three important concepts in RBAC.

RBAC actually binds the subject to the role by creating a role through RoleBinding. The following diagram shows several types of binding relationships in RBAC. 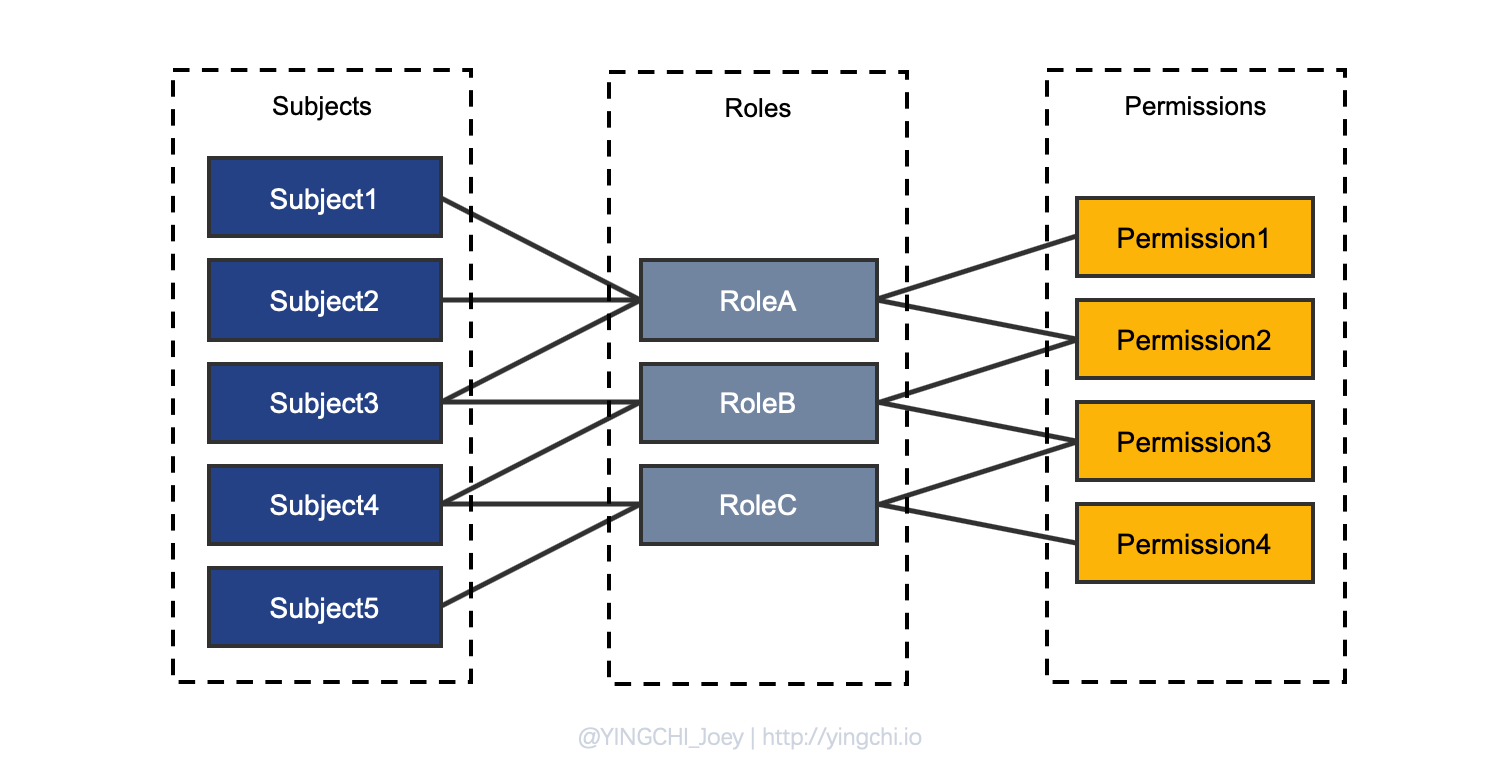 Now let’s take a fresh look at the RBAC implementation from a Kubernetes perspective.

As you can see in the figure, the process of implementing a custom RBAC for Kubernetes involves several concepts that were actually mentioned at the beginning, but which are defined more specifically in Kubernetes, and which are the focus of attention.

Subjects in kubernetes include User, Group, and Service Account, the first two are well understood, Service Account is actually the difference between User Account, resources in Kubernetes can also be treated as a Subject, such as a Pod For example, when a Pod needs to operate cluster resources, it uses a Service Account.

A role is essentially a collection of rule permissions that are bound to a specific Subject, thus giving the Subject a corresponding set of permissions.

In Kubernetes, Roles are divided into two categories.

The key step in the definition of each Role is to specify the rules that the Role has, and the permission rules in Kubernetes need to be specified as follows.

Binding, conceptually well understood, is the binding of a Role with defined rule permissions to a specified Subject, thus giving the Subject a set of permissions.

Binding in kubernetes is divided into two types.

The scope of permission control (Namespace/Cluster) in Kubernetes is determined by the type of Binding, not by Role and ClusterRole, which is important to remember. 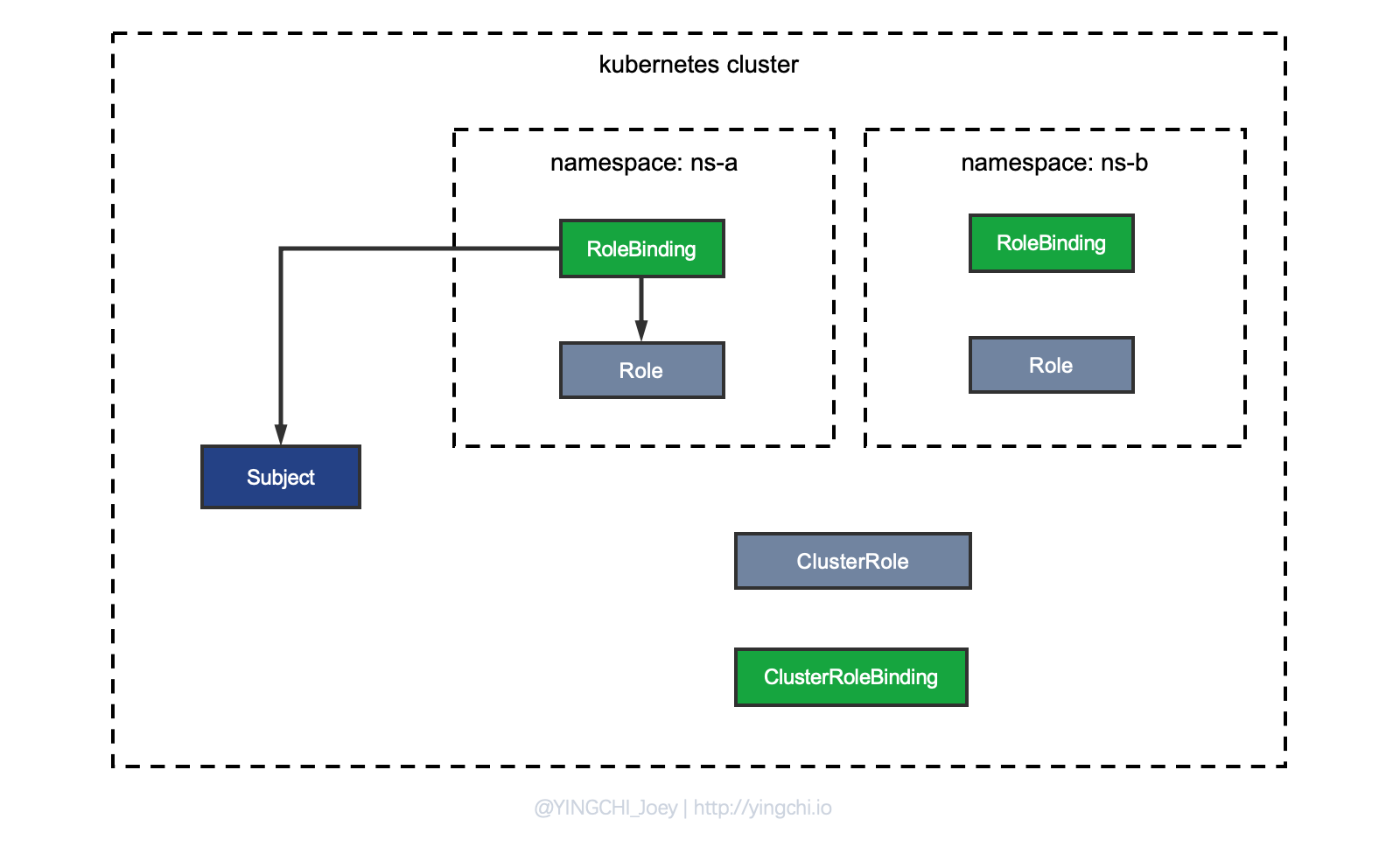 As you can see above, this approach is more intuitive, because as I said before, a Role in Kubernetes should be understood as a Namespace Role, which is defined under the Namespace, so if you want to implement binding between Subjects and Roles in the Namespace scope, it’s just a matter of configuring a RoleBinding. 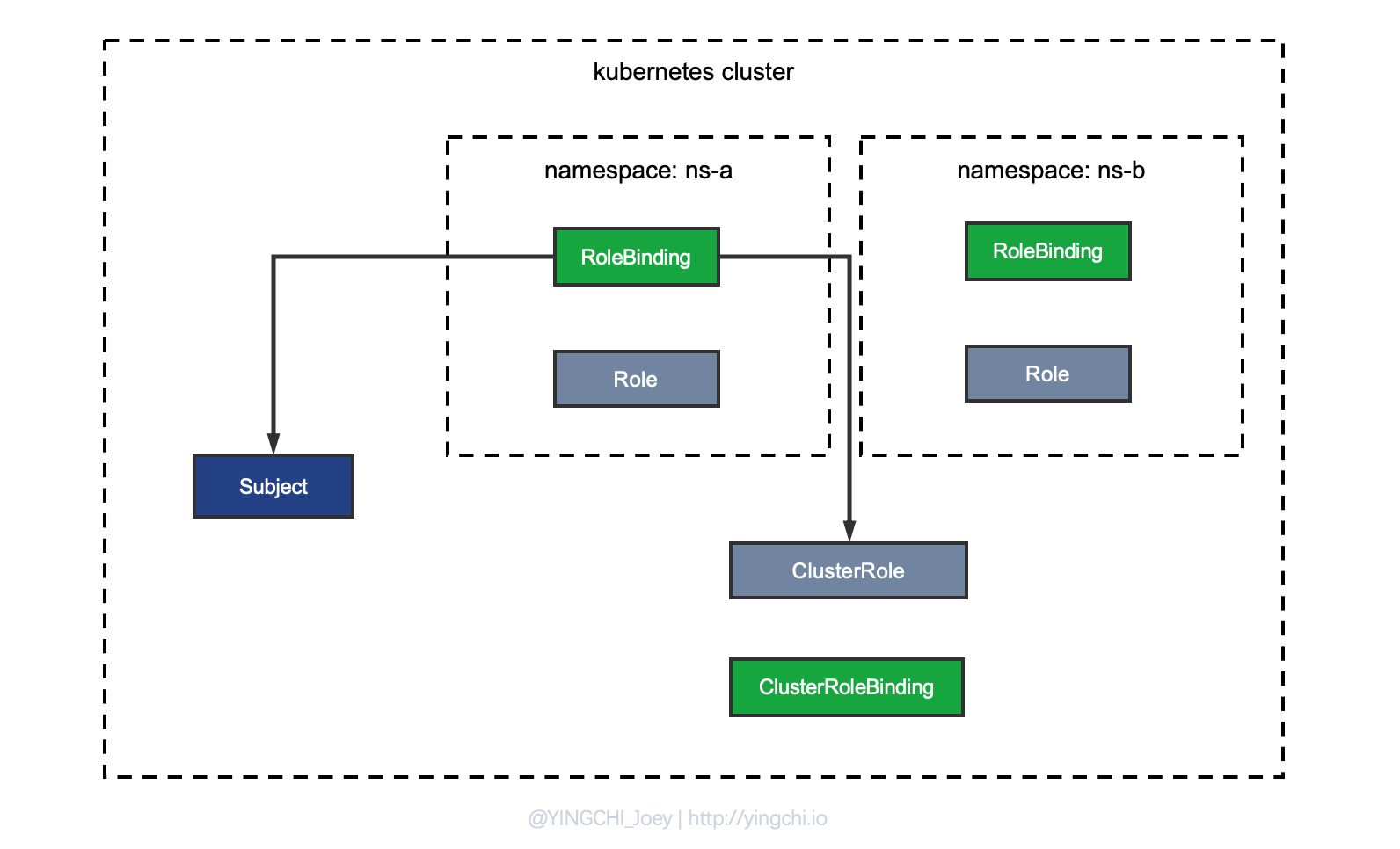 Once you hear ClusterRole, many people will subconsciously think that it is about cluster-wide permission control, but in fact, the scope of permission control is not directly related to the type of Role, ClusterRole, which is essentially a role defined globally, can act under Namespace, can be reused by multiple Namespaces, and can also Cluster.

Why do you recommend using the combination of ClusterRole + RoleBinding?

Let’s think about a problem. If a PodReader Role is designed to have the permission to get/list/watch the Pods under the current Namespace, how should it be designed if both namespaces need such a Role?

Using the first approach described above, each namespace would need to define a PodReader Role. 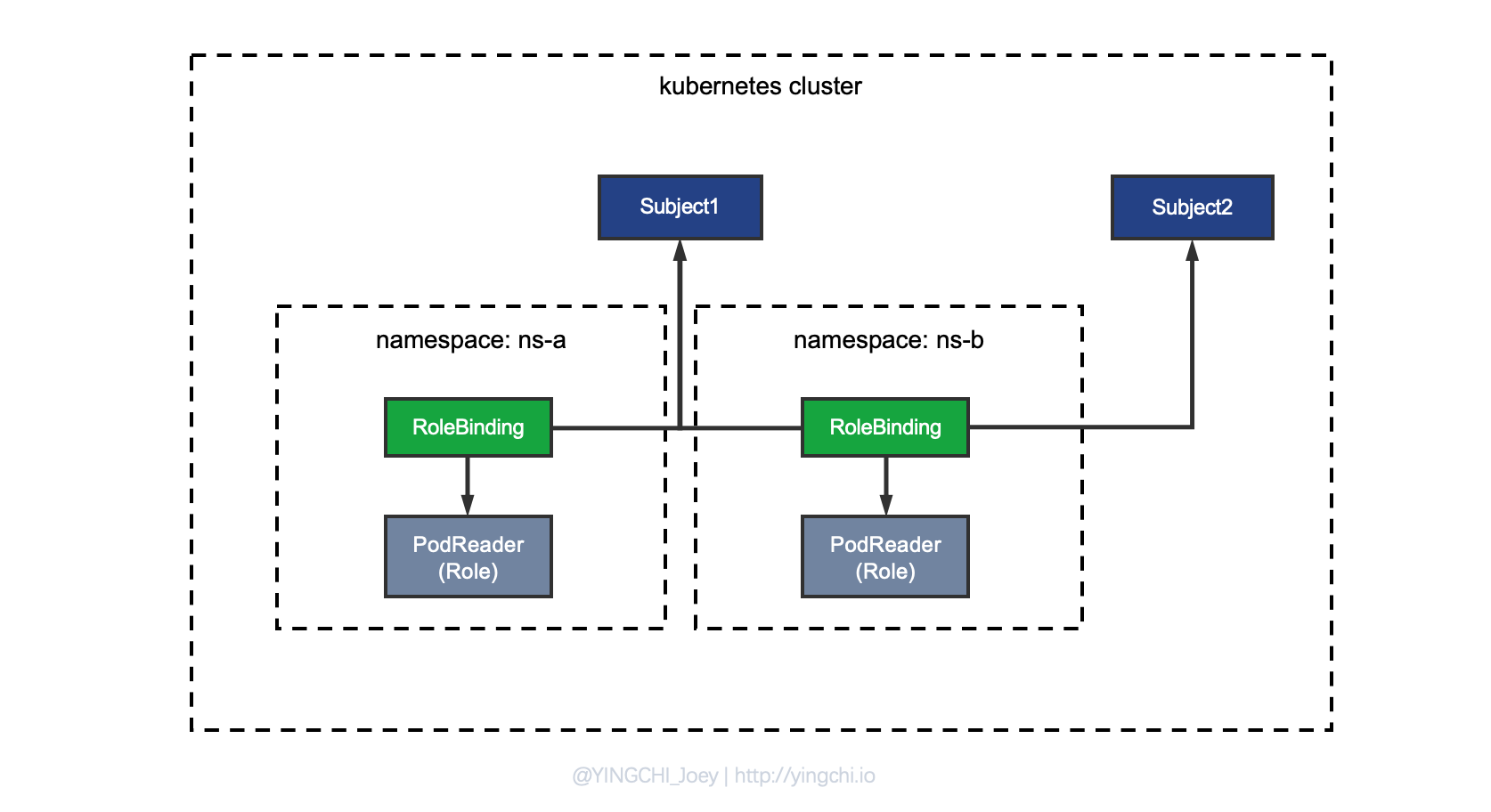 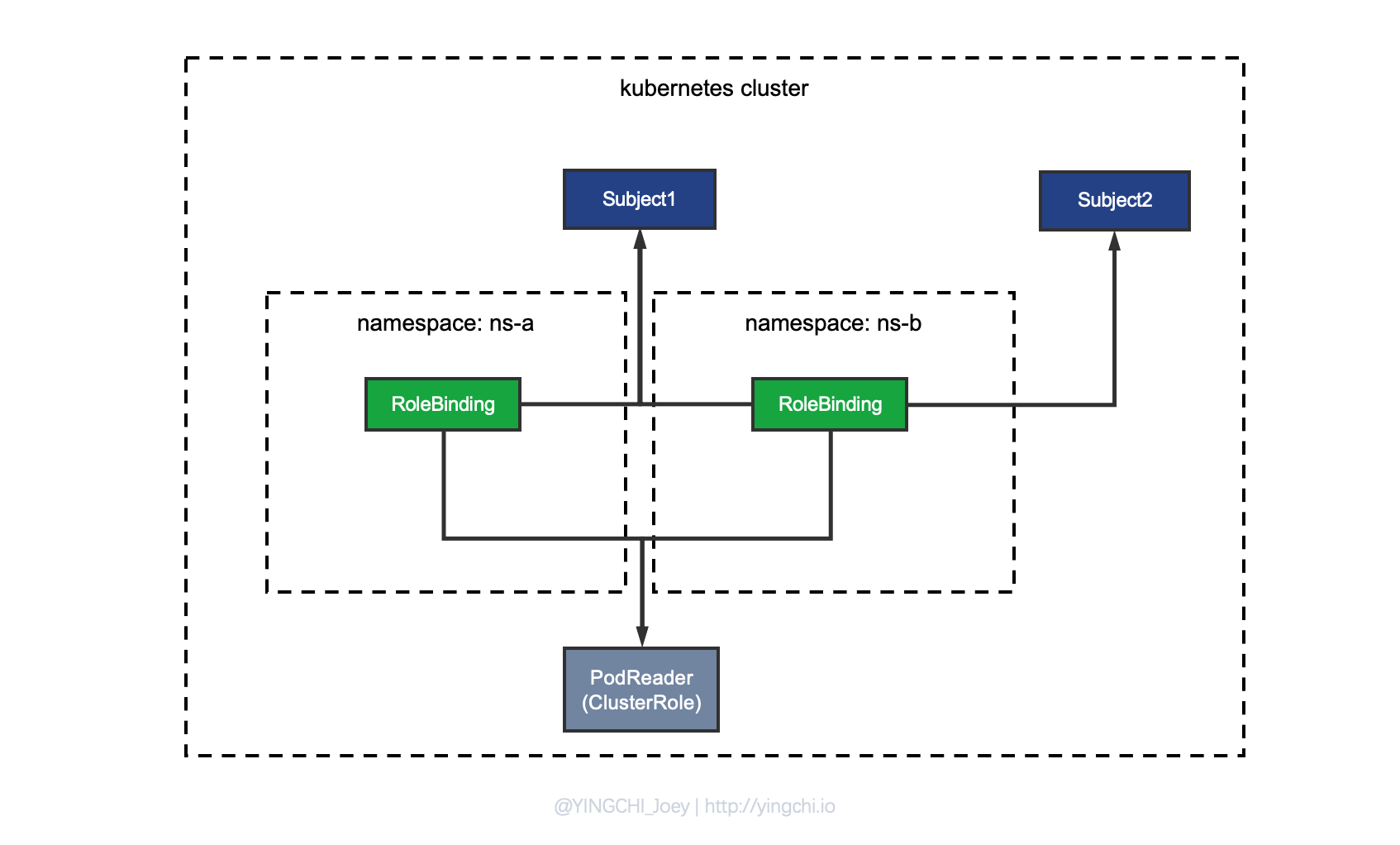 As shown in the figure, that is, the PodReader is defined as a ClusterRole, and then different Subjects are bound to the same ClusterRole under different Namespaces through RoleBinding.

There is only one solution, which is via ClusterRoleBinding + ClusterRole. 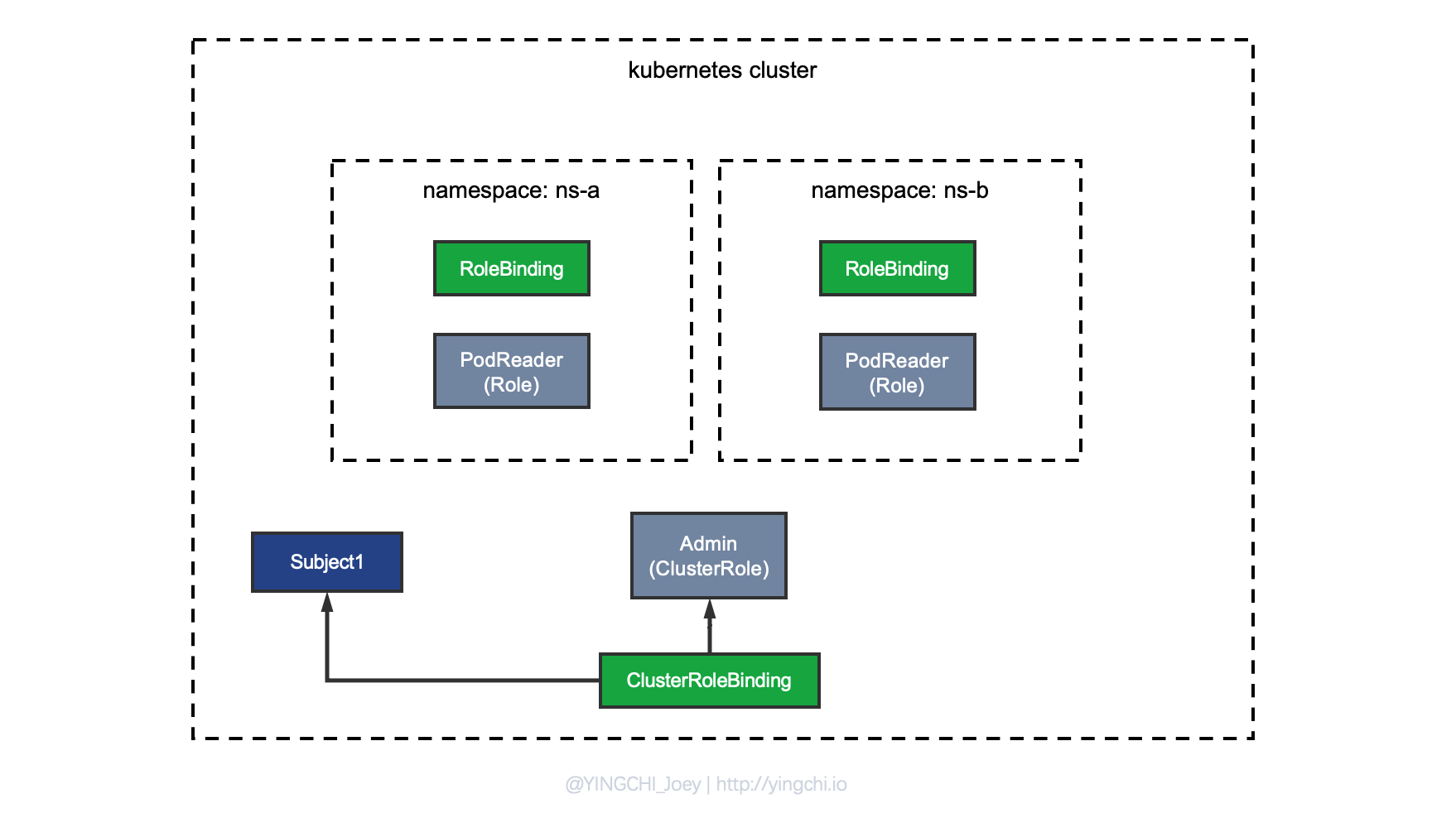 Note where I drew ClusterRoleBinding in the diagram. When I introduced the concept of Binding earlier, I mentioned that the scope of permission control (Namespace/Cluster) in Kubernetes is determined by the type of Binding, not by Role and ClusterRole** . If you want to implement cluster-wide RBAC, you must use ClusterRoleBinding, and note that when you bind by ClusterRoleBinding, you are only allowed to bind to the ClusterRole role, which can be simply interpreted as a global method that can only use the global amount of ClusterRole.