This article introduces the service discovery and traffic exposure mechanism in K8S clusters, including the workload type, service type, DNS resolution principle, and the rules of Layer 4 service exposure and Layer 7 service exposure in K8S.

The following diagram is a brief introduction to the K8S architecture design in the official K8S documentation. This architecture diagram focuses on the relationship between the cloud vendor’s API, the control plane (Control Plane) and the working nodes (Node) in the K8S cluster from the cloud vendor’s perspective, but strips out the third-party implementations such as CRI, CNI, CSI, etc. 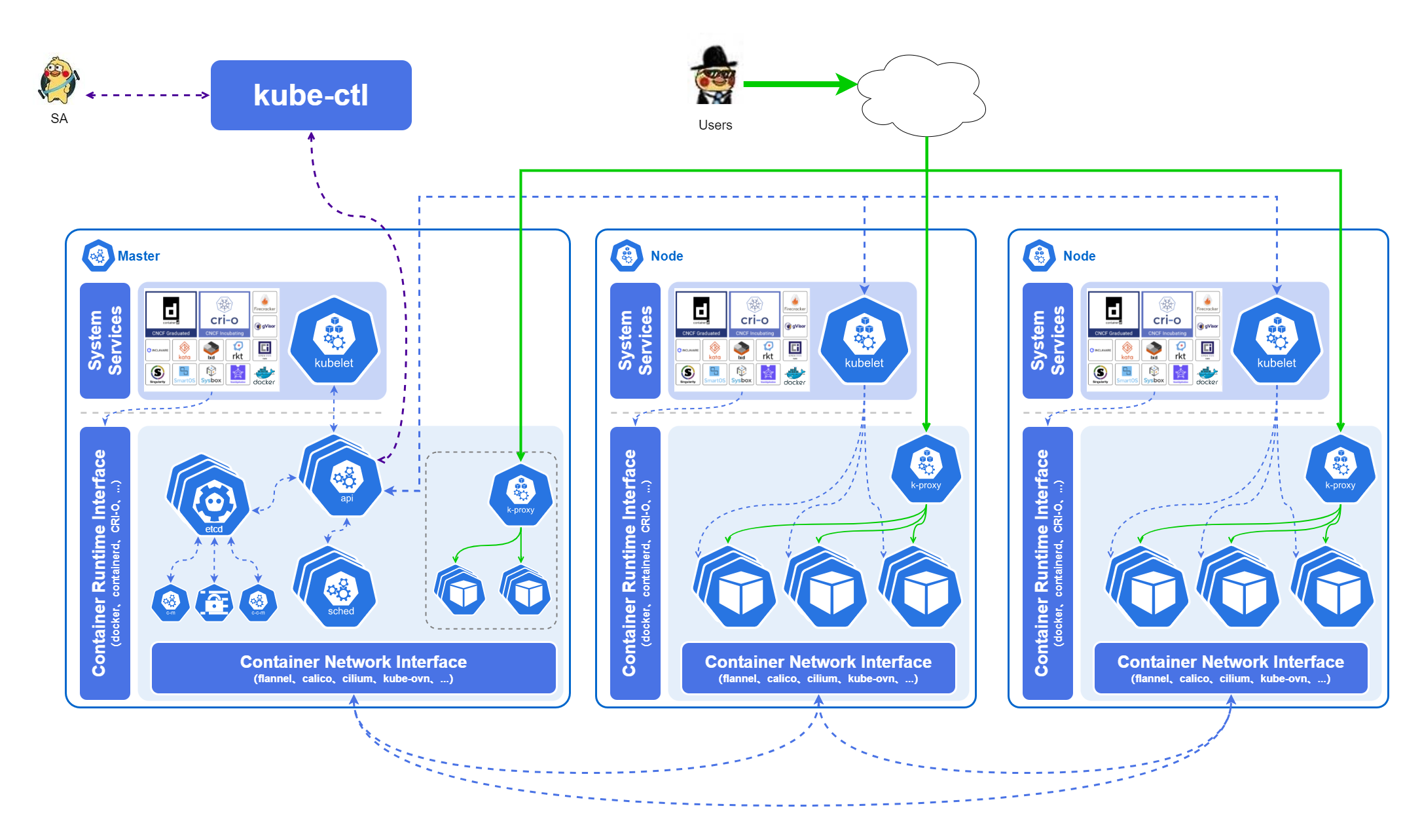 K8S itself does not implement the network model within the cluster, but provides a CNI interface for third parties to implement by abstracting it out, which saves development resources to focus on K8S itself, and can leverage the power of the open source community to create a rich ecology, some implementation details and requirements of CNI we can find on github, so we won’t go into the details here.

Focusing on the K8S definition of the network model within a cluster.

K8S does not care about how each CNI specifically implements the above ground rules, as long as the final network model conforms to the standard. So we can ensure that no matter what CNI is used, the Pod network within a K8S cluster is a huge flat network, and each Pod has equal status in this network. This design brings great convenience to many scenarios such as service discovery, load balancing, service migration, application configuration within the cluster. 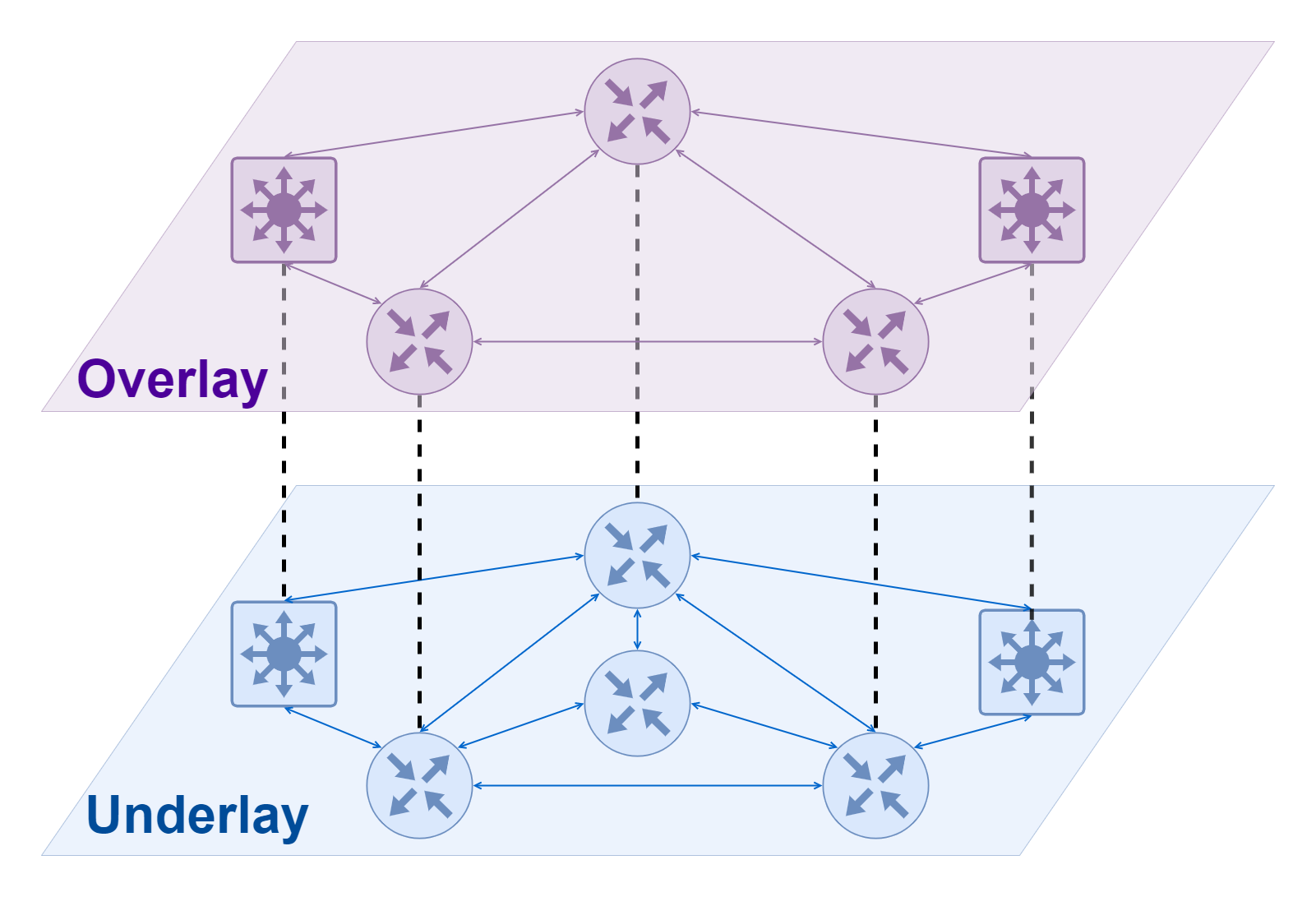 The main advantages of using Overlay network are as follows.

The main disadvantages of using Overlay networks are as follows.

BGP (Border Gateway Protocol/Border Gateway Protocol) is a standards-based network protocol for sharing routes across a network. It is one of the fundamental components of the Internet and has excellent scaling characteristics. In K8S, BGP is a routing protocol with a high presence, and there are many related CNI or LoadBalancer that use BGP protocol to implement features such as route reachability or ECMP.

The best supported and most widely used CNI for BGP protocol is Calico, and Cilium also has support for BGP mode which is still in beta stage.

An important difference between different K8S cluster networks is the routability of the Pod’s IP outside the K8S cluster.

Since Pods within a K8S cluster are necessarily routable to each other, the routability between services outside the cluster to Pods within the cluster is explored here.

The so-called routing unreachable means that there is no way for machines outside the K8S cluster to establish a direct connection with the Pods inside the cluster, and the servers outside the cluster do not know how to route packets to the Pod IPs.

The advantages of a Pod IP address that can be routed outside the cluster are as follows.

The main disadvantages of Pod IP addresses that can be routed outside the cluster are as follows.

Before we start, let’s clarify a few points.

In summary, we can conclude the following.

Generally speaking svc can be divided into four categories: Headless, ClusterIP, NodePort, LoadBalancer. The relationship between the four is not completely mutually exclusive, as follows. 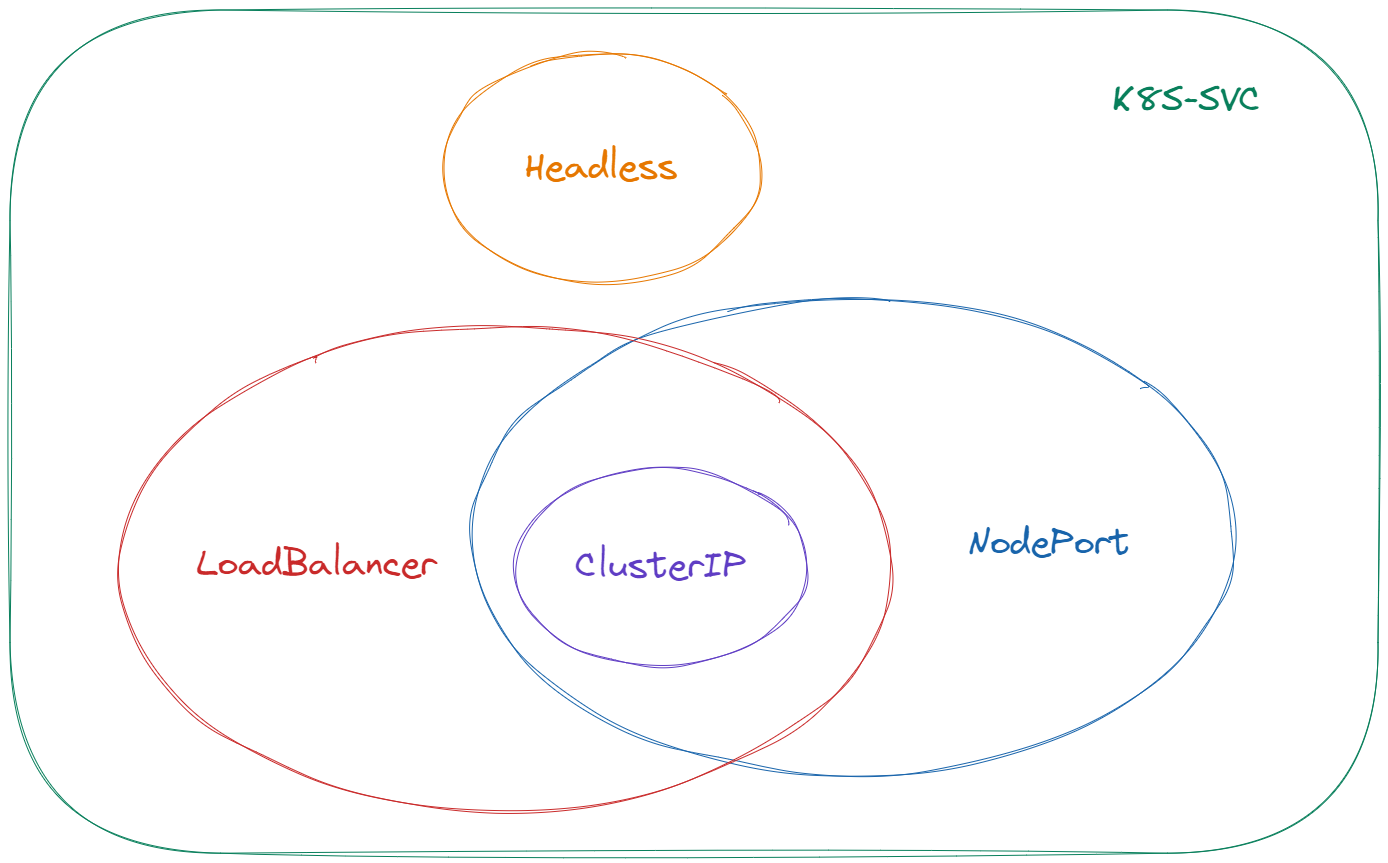 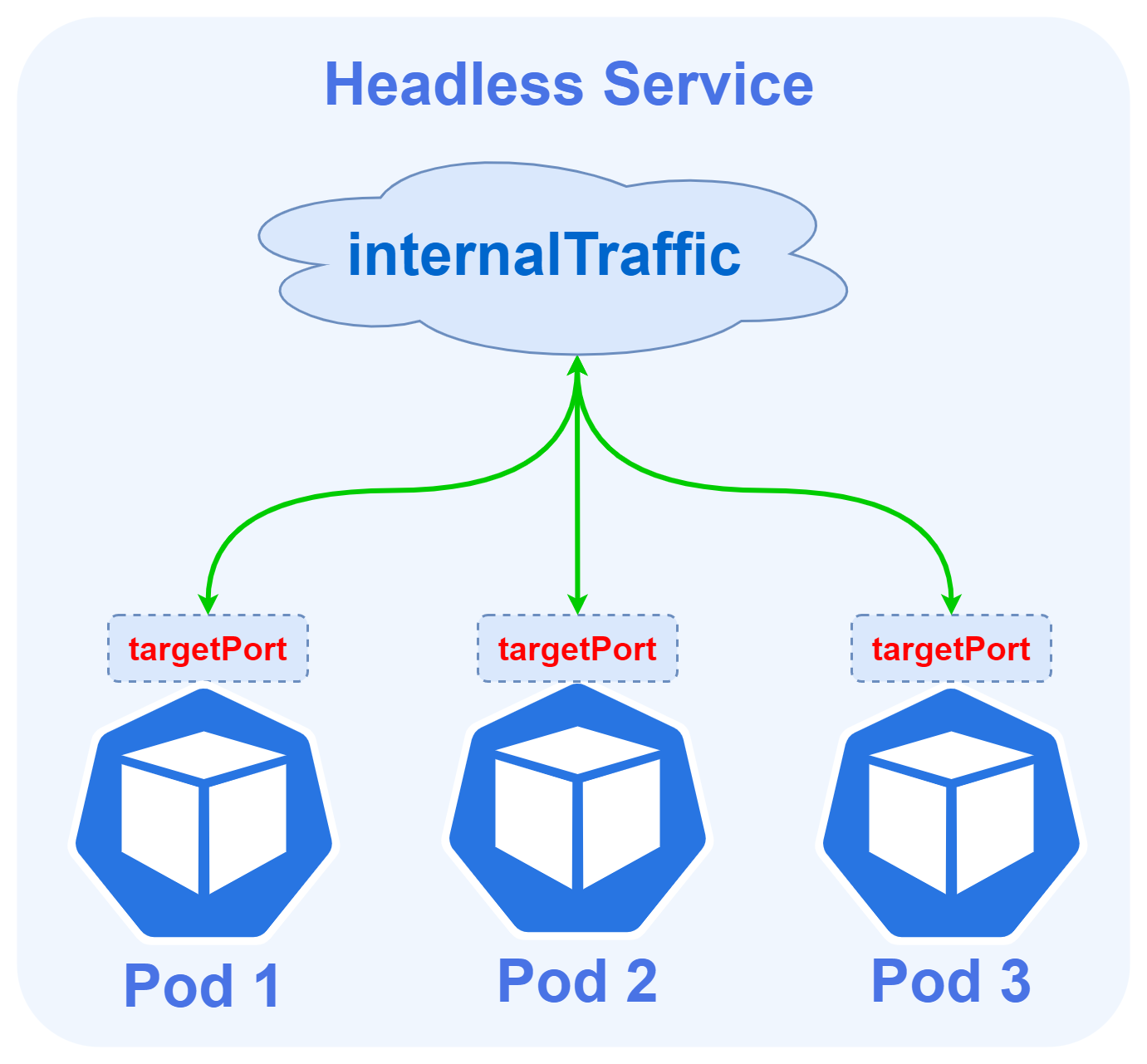 Headless Services The advantage of this approach is that it is simple enough and the request link is short, but the disadvantage is also obvious, that is, the DNS caching problem brings uncontrollable. Many programs query DNS and do not refer to the standard TTL value, either frequent queries put enormous pressure on the DNS server, or the query is cached all the time after the service has changed and is still requesting the old IP.

In a Kubernetes cluster, each Node runs a kube-proxy process. The kube-proxy is responsible for implementing a form of VIP (Virtual IP) for the Service, commonly referred to as ClusterIP Services. 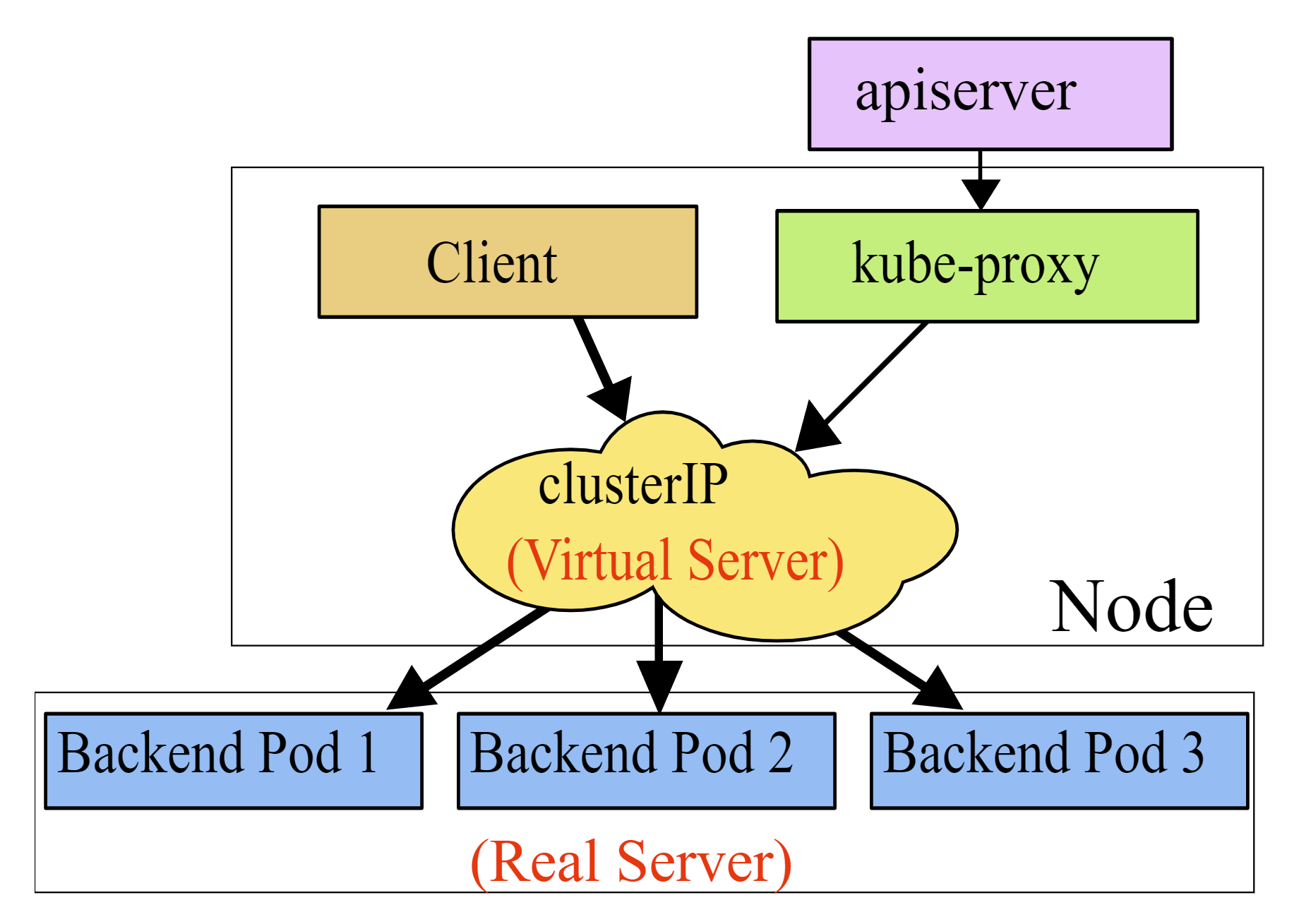 The advantage of ClusterIP Services is that the VIP is located in front of the Pod, which can effectively avoid the problems caused by direct DNS resolution mentioned earlier; the disadvantage is also obvious, when the volume of requests is large, the processing performance of the kube-proxy component will first become the bottleneck of the entire request link. 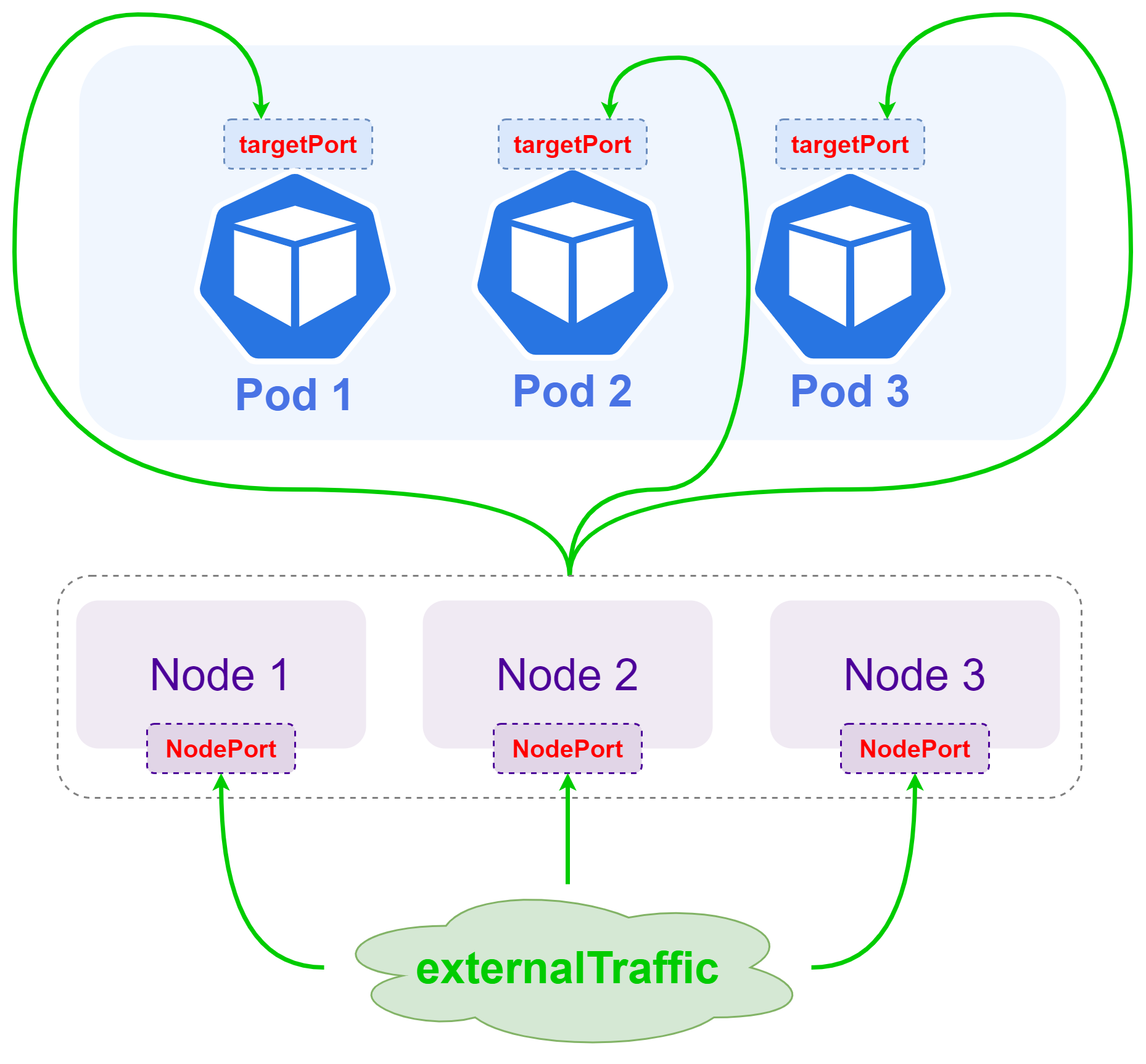 The advantage of the NodePort Service approach is that it is very simple to expose the service to the outside of the cluster through K8S’s own functionality; the disadvantages are obvious: the port limitations of NodePort itself (limited number and range of options) and the performance bottleneck of the kube-proxy component when the volume of requests is high.

We still borrow the diagram from OpenELB’s official website to explain the process, and note that this is BGP mode. 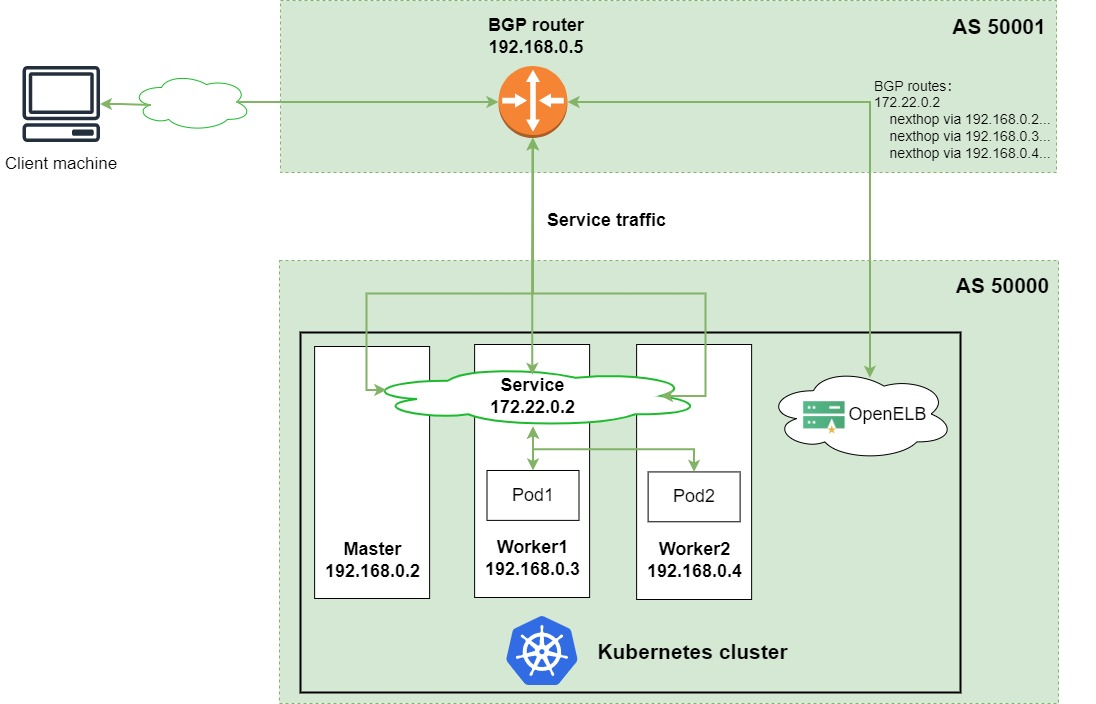 The advantage of LoadBalancer Service is that it is convenient, efficient, and applicable to a wide range of scenarios, and can cover almost all external service exposures; the disadvantage is that there are few choices of mature and available cloud-native LoadBalancer, and the implementation threshold is high.

When we do SVC and Workload deployment configuration, we often encounter various configuration items with Port in their names, which is one of the several concepts in K8S that are easy to confuse people. The relationship between the four can be more clearly distinguished by the following diagram. 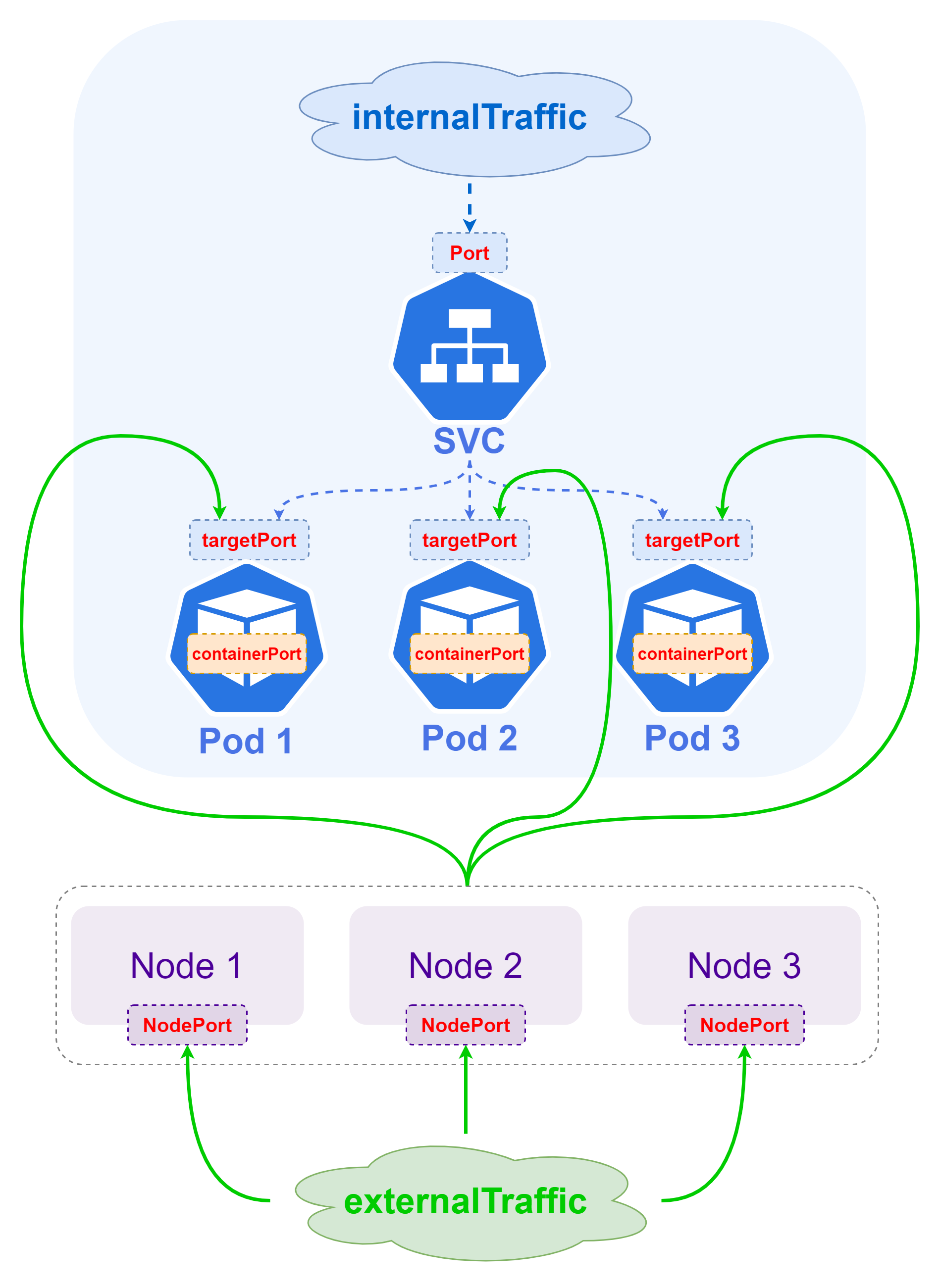 In summary, we can learn the main difference between the four, then we should make sure that the targetPort, the containerPort and the actual listening port of the program running inside the Pod are consistent, so as to ensure that the requested data forwarding link is normal.

As we all know, in K8S, IP is subject to change at any time, and the most frequent change is Pod IP, Cluster IP is not necessarily not subject to change, EXTERNAL-IP, although you can manually specify a static IP to remain unchanged, but mainly for services outside the cluster; therefore, in K8S cluster, the best way to access each other’s services in a K8S cluster is through the domain name.

In a K8S cluster, Kubernetes creates DNS records for Services and Pods.

Note: The following focuses on the ClusterFirst mode

There are several points to note in the configuration here.

This is a more general case, let’s look at a more specific configuration

The /etc/resolv.conf configuration file inside this pod has two differences from the previous one.

Warm tip: When reading this part, pay special attention to whether there is a dot at the end of the domain name .

As we said before the value of options ndots is 1 by default and 5 in K8S, for obvious effect we use 5 in K8S as an example here.

Here again, there are two SVCs in a namespace demo-ns, demo-svc1 and demo-svc2, so their /etc/resolv.conf should look like the following.

Note that the above rules apply to any domain name, that is, when we try to access an external domain such as tinychen.com in the pod, the above queries will also be performed in turn.

When ndots is greater than or equal to options ndots

We directly request the domain demo-svc2.demo-ns.svc.cluster.local in demo-svc1, the ndots is 4 at this time, which still triggers the search rule above.

If we request a longer domain name such as POD domain pod-1.demo-svc2.demo-ns.svc.cluster.local., the ndots at this time is 6, which is greater than the 5 in the configuration, so it will not trigger the search rule above either, but will directly query the domain name and return the resolution.

From the above analysis, we can easily conclude the following points.

Before we start we need to clarify the concept of four layers, here four layers refers to the fourth layer in the OSI seven-layer model, that is, the transport layer in which the TCP and UDP protocols are located, that is, we often say protocol + IP + port level of load balancing, common four-layer load balancers are LVS, DPVS, Haproxy (four layers and seven layers are available), nginx (four layers and seven layers are available ), etc. The two most common means of four-tier service exposure in K8S are Nodeport and LoadBalancer, which we mentioned earlier. 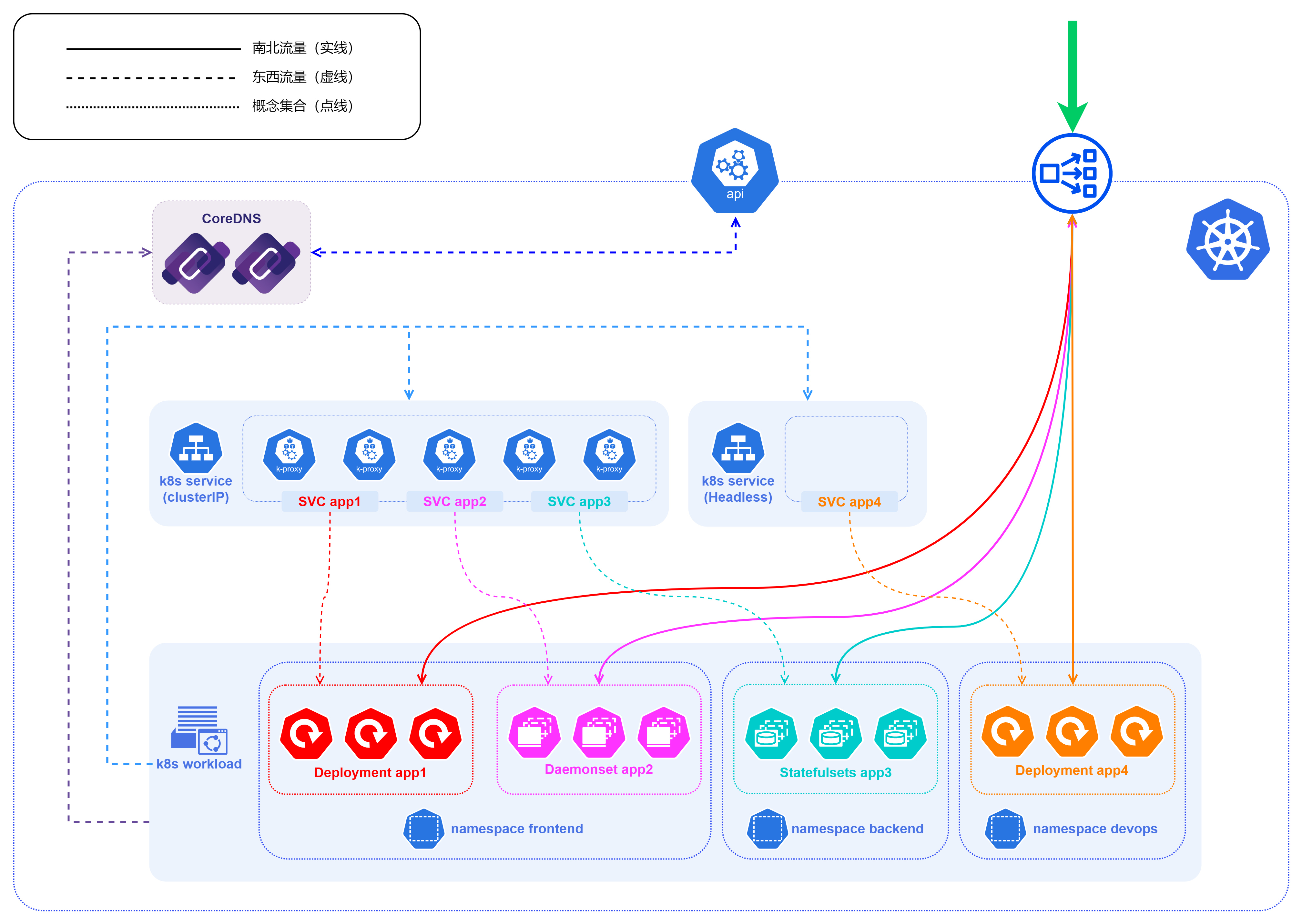 Let’s start from the bottom to the top

The advantage of the four-tier LoadBalancer service exposure approach is that it is widely applicable, because it works on four tiers and therefore can be adapted to almost all types of applications. But there are also some disadvantages.

In K8S, these things are generally done by ingress.

Ingress is an API object that manages external access to services in a cluster, typically through HTTP. Ingress can provide load balancing, routing rule, certificate management (SSL termination), etc. Ingress exposes HTTP and HTTPS routing from outside the cluster to services within the cluster. Traffic routing is controlled by rules defined on Ingress resources.

The following diagram is an official K8S diagram of how ingress works.

Here we need to pay attention to the distinction between Ingress and Ingress Controllers, which are two different concepts and are not equivalent

We learned above that the so-called Ingress Controllers themselves are actually special workloads (generally deployment), so they themselves need to be exposed to the cluster in some way in order to provide services, and here they are generally chosen to be exposed through LoadBalancer for four layers of services. 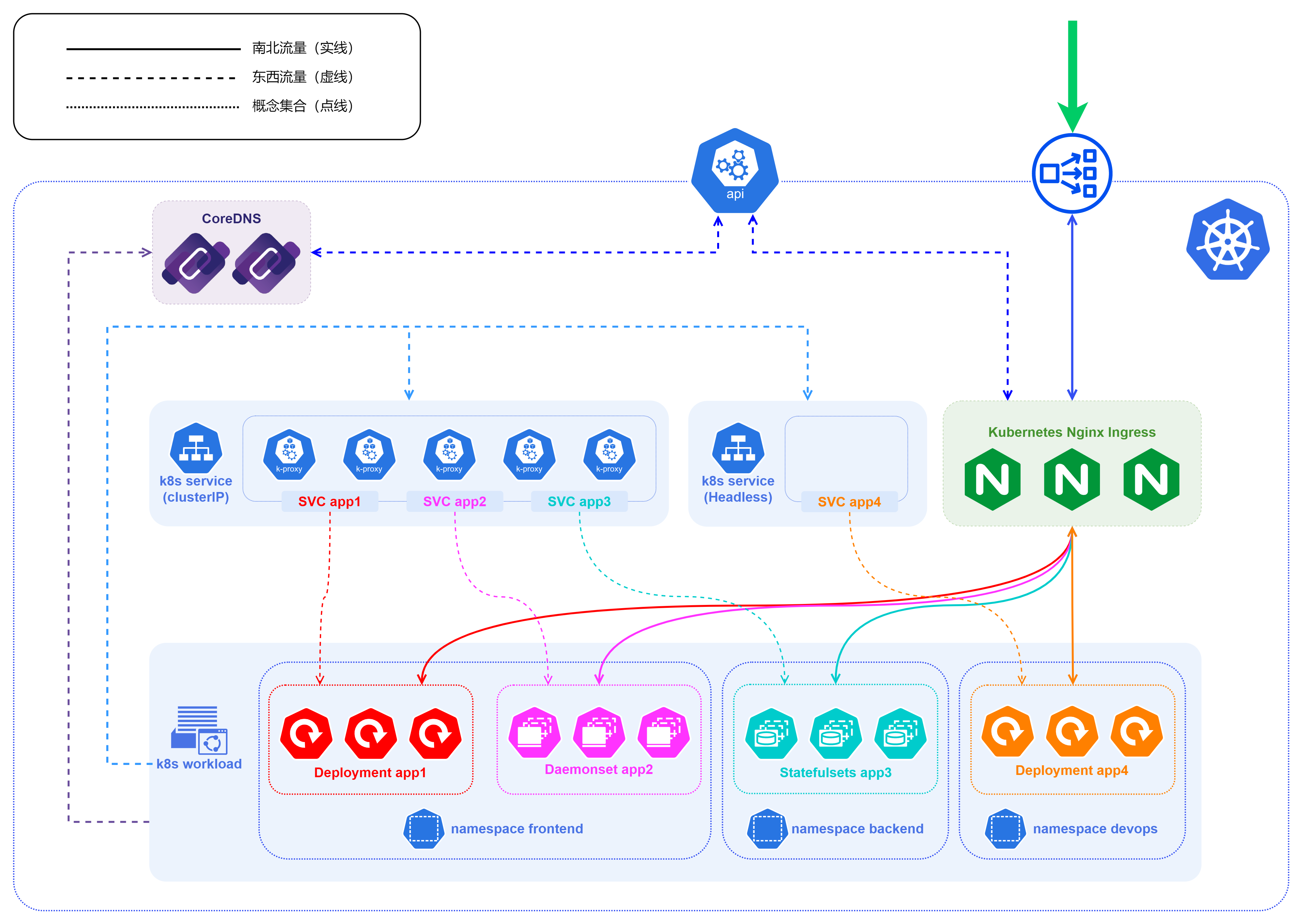 Here the basic service exposure of K8S need to understand the knowledge is introduced. Since K8S itself is indeed very complex, this article can only scratch the surface when introducing it. With the continuous development of K8S, the ordinary service exposure is now not good enough to meet the high-end needs of some scenarios, which then triggered a lot of evolution such as service mesh, sidecar, sidecarless, and so on.