I recently learned about OIDC in the authentication system and put together a blog that covers the concepts, processes, and usage of OIDC. Before introducing these, we need to clarify two terms Authorization and Authentication. 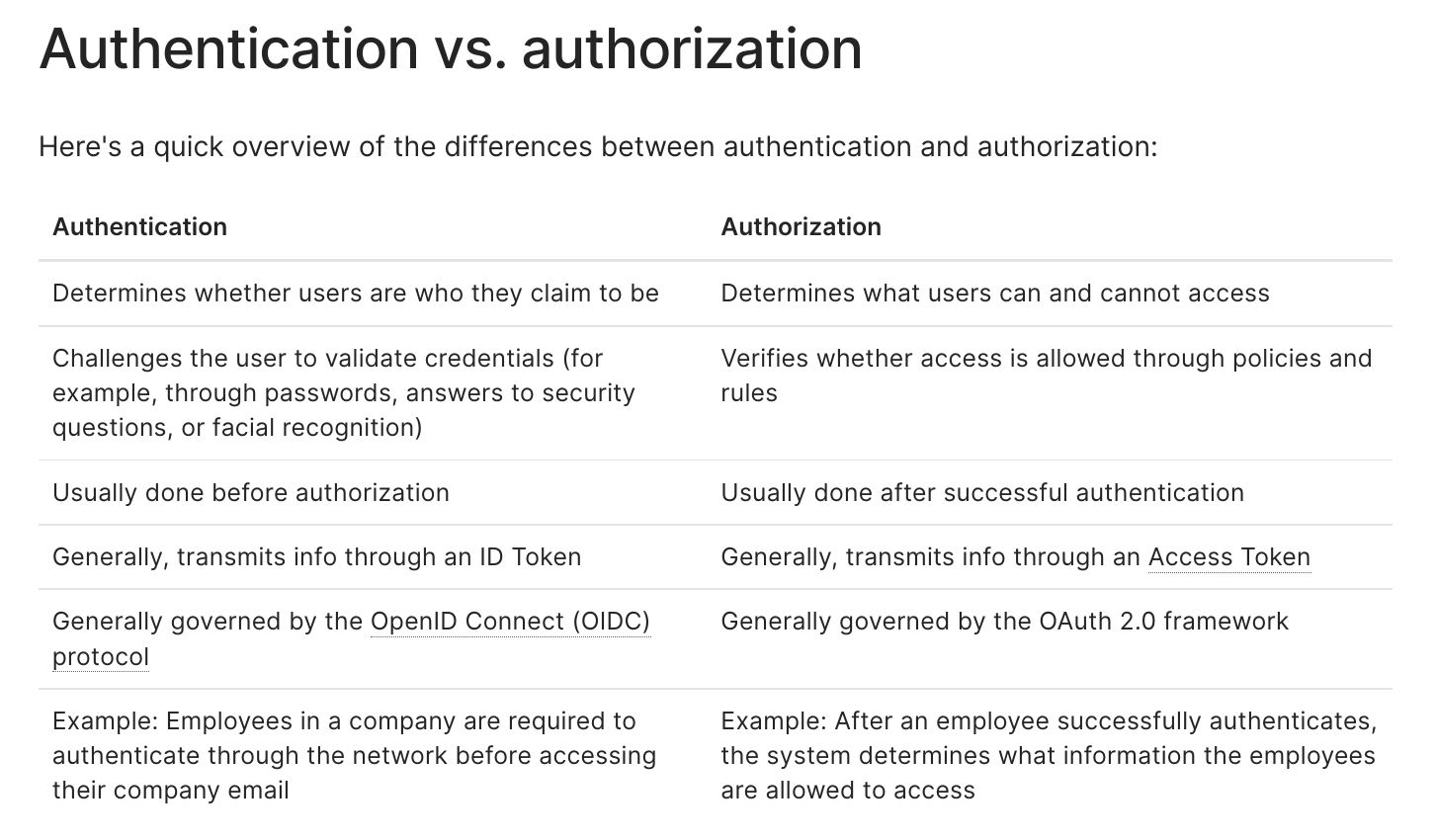 Before we understand OIDC, we need to understand OAuth 2, because OIDC is based on the OAuth 2 process. Before that, let’s introduce the whole scenario with an example.

Suppose now we want to log in to the Slack iOS client with a Google account, what do we need to do? One easy way to do this is to give Slack our username and password so that Slack can log in as us, but this is a huge security risk, and there’s basically no good way to do this if Slack accidentally leaks the username and password, or if we want to revoke the authorization.

OAuth 2 provides a total of four authorization modes, with a new enhanced mode for authorization code mode added in 2015. Let’s start with the simple one.

This mode is the simplest, in fact, the client tells the server which client it is, and the server sends the access_token.

This mode is rarely used and is mainly used when the client is very reliable, for example, when logging into a hosted cloud desktop system, the system requests a token from the server and the server immediately issues it, after which the user uses it as a specific user of the cloud desktop.

Implicit Grant mode is suitable for places where it is not convenient to expose client_secret, such as browser side (web page), distributed apps, which are easy to be cracked, so you can use Implicit Grant.

In our example at the beginning, Slack pops up a webview, loads Google’s authorization page, Google displays the corresponding account, and then prompts the client to read the user’s information, and when the user clicks to confirm, Google checks the page and redirects the page to the address specified by the client, and brings the access_token in the URL fragment.

Authorization Code mode, which is the most complex and secure authorization mode, flows as follows.

First, Slack client opens webview, loads Google’s authorization page, and specifies the mode as Authorization Code, Google lets the user confirm, then redirects back to the URL specified by Slack, and includes a parameter called code in the parameter, then Slack’s server takes the code, takes client_id, client_secret and requests Google again. Then Slack’s server takes the code and requests Google again with client_id, client_secret, and Google verifies the token and sends access_token if it is successful. Since the token is requested directly by Slack’s server, it is more secure than the previous three.

This pattern, which is basically the same as Authorization Code, differs in that it does not expose client_secret, so it can be used in browsers, etc. The process is as follows.

Next, let’s take a look at JWT. The full name of JWT is JSON Web Token, which simply means that three JSONs are linked together with a dot, for example

There are actually three parts.

For example, in the JWT above, we decode it.

The advantage of JWT compared to the server-side session method is that you don’t need to read the database every time to get the information, the information is stored in the payload, just take it out and parse it, then compare the Signature and whether it expires. However, the disadvantage is that once issued, it can not be revoked, as long as someone gets the JWT, before the expiration date, you can operate with this identity. There is a remedy, which is to store the disabled JWT in the database, but then you have to read the database every time, so I don’t like JWTs very much.

Finally we come to our main point, OIDC, the main purpose of OIDC is to log in users and get user information, not to get other permissions. As we said before, OIDC is based on OAuth 2, so OIDC can use Authorization Code mode, Implicit mode, and a Hybrid mode.

The Authorization Code Flow goes through the following steps:

The difference is that there must be an item called openid in the scope parameter, and another point is that there is an additional id_token in the final return result.

This is a JWT that, when parsed, contains the user’s information.

There are a few other fields, which can be found at https://openid.net/specs/openid-connect-core-1_0.html#IDToken

The steps are as follows.

The process is basically the same as the Implicit mode of OAuth 2, the difference is that the value of response_type is not token but id_token token or id_token, and for the response result, a new id_token will be added in the URL fragment.

The steps are as follows.

The above are the three authorization methods of OIDC, through OIDC, we can login to another system as a third party system and get some basic information, such as first name, last name, username, email, avatar url, etc.

This article summarizes the 5 authorization processes of OAuth 2, and then on top of that, introduces the OIDC process, and its role. I hope it will be helpful to readers.