The main purpose of using descheduler is to improve the stability of the cluster and to increase the resource utilization of the cluster.

To address the above issues, descheduler provides a series of policies that allow users to rebalance the cluster state according to some rules and configurations to achieve a desired effect. The core principle is to find the pods that can be migrated and evict them according to the policy configuration, it does not schedule the evicted pods itself, but relies on the default scheduler to do so. There are currently ten supported policies.

This is an introduction to the Community Descheduler component.

After understanding the descheduler’s policies, you will find that the community descheduler’s functionality is far from meeting the needs of the company’s internal production environment, first of all, several policies starting with Remove are actually not needed in most scenarios. LowNodeUtilization and HighNodeUtilization policies can be extended according to the actual scenario, but these two policies are based on the allocation rate request ratio of nodes to make decisions, and Pod migration based on the allocation rate only has a general effect and cannot meet the requirements of production environments. In most production environments, we need to use the real node utilization rate to perform Pod migration.

In addition to changing the community request allocation rate metric to be based on the real cpu usage of the nodes, some additional features have been added after analyzing the data of the production environment. The strategy has evolved several times in the process of actual use, from the initial use of the community’s periodic inspection mechanism to trigger, but the strategy has a certain lag, the real scenario if the node utilization is too high to deal with as soon as possible, in order to improve the timeliness of the node high utilization scenario, the strategy is extended to directly connect to the internal monitoring system, through the alarm callback to trigger the migration of Pods on the node. Finally, for some scenarios where Pod migration cannot be performed during peak periods, a node utilization prediction algorithm is also designed to predict the high utilization nodes to perform Pod migration operations in advance before peak periods.

The policy is straightforward, and the migration of Pods on nodes is triggered directly after high utilization nodes are found through monitoring, and the policy adjustment is more flexible through alarm configuration, which takes effect directly after configuration without upgrading descheduler components. If there are more high-utilization nodes, the alarm policy can be configured under the standard threshold in an aggressive way. In a production environment, the policy, whether aggressive or conservative, may not achieve the best results, and eventually the policy needs to be adjusted to a robust state.

In the production environment, there is a time window for business change, and the operation of Pod migration of some high quality services needs to be consistent with the time window for business change. To avoid affecting the stability of the business due to Pod migration, for this scenario where Pod migration cannot be carried out during the peak period, it is necessary to predict the high-utilization nodes and process them before the peak period comes, and the implementation of the current prediction algorithm mainly refers to the recommended algorithm of the community VPA component, which is a prediction algorithm based on time series. The core of the algorithm is to obtain the utilization data of all instances on the node for the last 8 days, then calculate the daily P95 data by day, and finally weight the daily P95 data with different weighting factors to obtain the final prediction results.

Prediction data need to do a lot of analysis and validation to discover the factors that have an impact on the accuracy. In the process of actual validation, we found that there are two main points that affect the prediction results.

Due to the complexity of the scenarios in production environments, Pod migration is also a damaging operation for the business, and it is important to take the necessary precautions during the migration process and configure some constraint policies to guarantee the stability of the business.

Although k8s can be configured with PDB (PodDisruptionBudget) to avoid simultaneous eviction of copies of objects, we believe that PDB is not fine-grained enough and cannot be better used in cross-cluster scenarios, and a global constraint limit module will be used here to make the Pod of the service have as little impact on the service and balance the load as possible during the redispatch process The problematic nodes will ensure that the service is not interrupted or the service SLA is not degraded.

Currently, there are various policies to constrain the Pod migration process. In terms of macro policies, the constraints are mainly for global policies, and there are restrictions on the rate of Pod migration and the total number of Pods migrated in a cycle in different clusters and resource pools, as well as restrictions on the Pod migration time window and whether to migrate across clusters, and black and white lists are configured for each cluster and resource pool. In the micro policy, mainly for the node and service constraints policy, node and service Pod migration rate and the total number of migrated Pods in a cycle are also limited, and the selection of Pods under the service during migration will also do some restrictions for Pod status and service level.

After analyzing the online data, we finally used three indicators to evaluate the effect of secondary scheduling. The first one is the discovery rate of high-utilization nodes, which refers to the ratio of the number of high-utilization nodes discovered by secondary scheduling to the number of high-utilization nodes collected by the company’s standard, which in theory should be close to the result of both. In practice, the algorithm used in the alarm policy was found to be inconsistent with the algorithm used in the company’s statistical standard during the implementation. The detection rate is low due to the low sensitivity of the configured alarms and the limitation of the Pod migration window.

The third one is the efficiency of Pod eviction from high-utilization nodes. If the utilization of the Pod node above the evicted high-utilization node is not reduced to a certain threshold, it is also not as expected. There are three main reasons for the low eviction efficiency, the first one is that various constraints lead to the eviction of Pods that are not optimal, and the node utilization does not decrease significantly. The second is that after a Pod is evicted, a new Pod will be scheduled on the node soon. The third is that the utilization rate of some Pods on the node becomes higher.

The above is a process of secondary scheduling effect analysis. 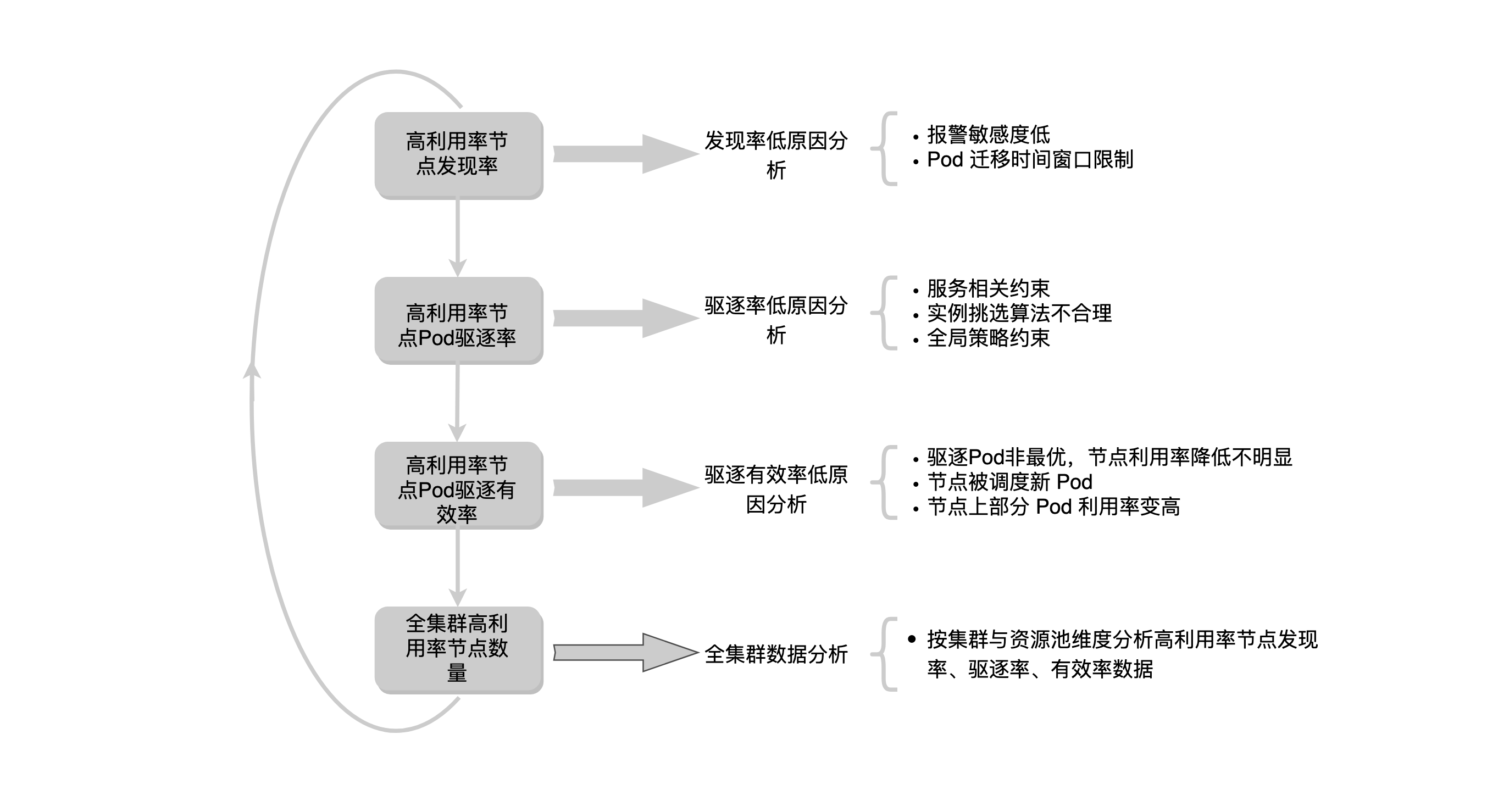 The current analysis is mainly conducted by some data from the secondary scheduling component itself. The cluster-wide high-utilization nodes are also related to business traffic, cluster capacity, scheduler policies, and other factors. The overall resource utilization of the cluster increases when some services have operational activities, and the scheduler schedules instances up for nodes with low scores when the cluster resources are tight, all of which have an impact on the number of high-utilization nodes.

This article introduces the basic functionality of the current community descheduler component as well as some of the flaws and extension strategies of the descheduler in production environments. There are also some safeguards for business stability when using descheduler to migrate Pods. The basic function of descheduler is to migrate Pods based on some policies, and there are many scenarios in the production environment where Pods on nodes need to be migrated. For example, kernel upgrade operations that require node restart, or machine relocation operations in different server rooms. There are also scenarios where k8s components are upgraded (runtime switching, etc.) that can be supported by adding policies to descheduler. In the future, we will continue to add other policies to the descheduler in the context of production environments. For example, Pod migration based on node interference rate scenario, Pod migration based on anti-affinity policy for service signature.