When learning C language there is a strange keyword volatile, what exactly is the use of this?

volatile and the compiler

First look at a piece of code like this.

Compile it and note that O2 optimization is used here:

Let’s take a closer look at this generated assembly.

As you can see, the decision to jump out of the loop is made by checking the eax register, but not by checking the real content of the memory where the variable busy is located.

If the machine instruction corresponding to the while loop in the wait function simply reads from a register, then even if thread B’s signal function modifies the busy variable, it will not allow the wait function to jump out of the loop.

If you use the volatile modifier on the busy variable, the resulting instruction would look like this.

In addition to the multi-threaded example, there is also a category of signal handler and hardware modification of the variable (often encountered when interacting with hardware in C), if the compiler generates instructions like the one at the beginning of the article then the waiting thread will not detect the signal handler or hardware modification of the variable. 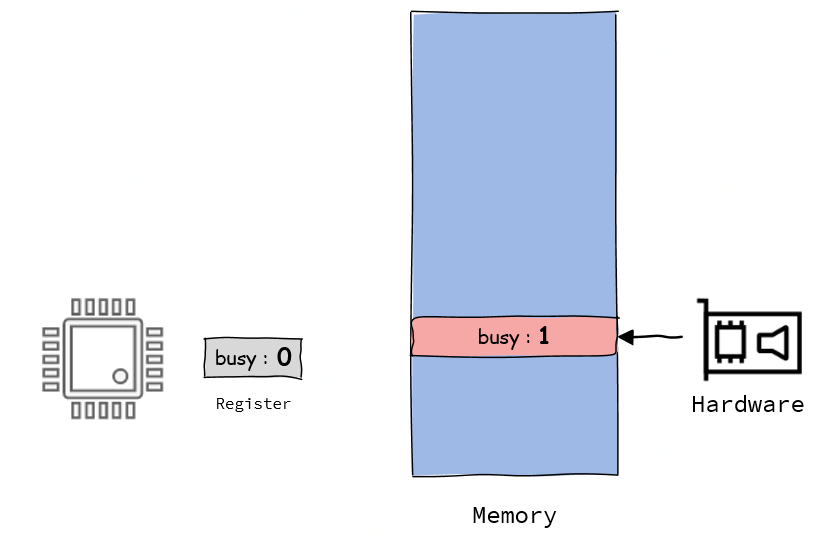 So here we need to tell the compiler: “Don’t be clever, don’t just read data from registers, this variable may have been modified elsewhere, get the latest data from memory when using it”.

Now it’s time to briefly summarize that volatile only prevents the compiler from trying to optimize read operations on variables.

Be sure to note that volatile only ensures the visibility of variables, but has nothing halfway to do with atomic access to variables, which are two completely different tasks.

Suppose there is a very complex struct struct foo.

You just use volatile to modify the variable foo just to ensure that when the variable is modified by thread1 we can read the latest value in thread2, but this does not solve the problem of multi-threaded concurrent reads and writes that require atomic access to foo.

Some of you may be thinking that if the variable I want to modify with volatile is not that complicated and is just an int, like this.

Is it possible for thread A to read the busy variable, thread B to update the busy variable, and then perform a specific action when A detects a change in the busy? Since the volatile modification ensures that the busy is read from memory every time, it should be possible to use it that way.

However, computers may be relatively simple conceptually, but they are complex in engineering practice.

To solve this problem, what we need is not volatile, which does not solve the reordering problem, but a memory barrier.

A memory barrier is a class of machine instructions that limits the memory operations that the processor can perform before and after the barrier instruction, ensuring that no reordering problems occur.

The effect of a memory barrier still covers the functionality provided by volatile, so volatile is not needed.

As you can see, we almost always do not use the volatile keyword in a multi-threaded environment.