NET 6 and SQL Server development environment into a Docker container using Visual Studio Code’s Remote Development today. Although it went smoothly with the documentation, the problem arose after the project was versioned. I think the point of this article is that in today’s containerized, cross-platform era, line breaks actually have to be confronted, or else you’ll be at a loss for what to do.

Experience the feeling of developing in containers

Experience the problem after version control

Since the .devcontainer/Dockerfile file in the project is responsible for building all the environments in the Dev Container development container, it contains SQL-related tools such as sqlcmd, bcp, sqlpackage, etc.

The contents of this .devcontainer/Dockerfile are as follows

You can find that he has copied mssql/installSQLtools.sh to the container, the point is that the Dev Container provided by Microsoft is based on Ubuntu 20.04.4 LTS as the main operating system, and when running this command, it will require all Shell Scripts to be executed with LF as the main line break character, so the common Windows CRLF line break character is not available, and the process of building container image will be wrong!

Let’s take a look at the process of how this error occurred.

At this point you will see the error message.

If you look at the Terminal, you can see the relatively detailed error message. 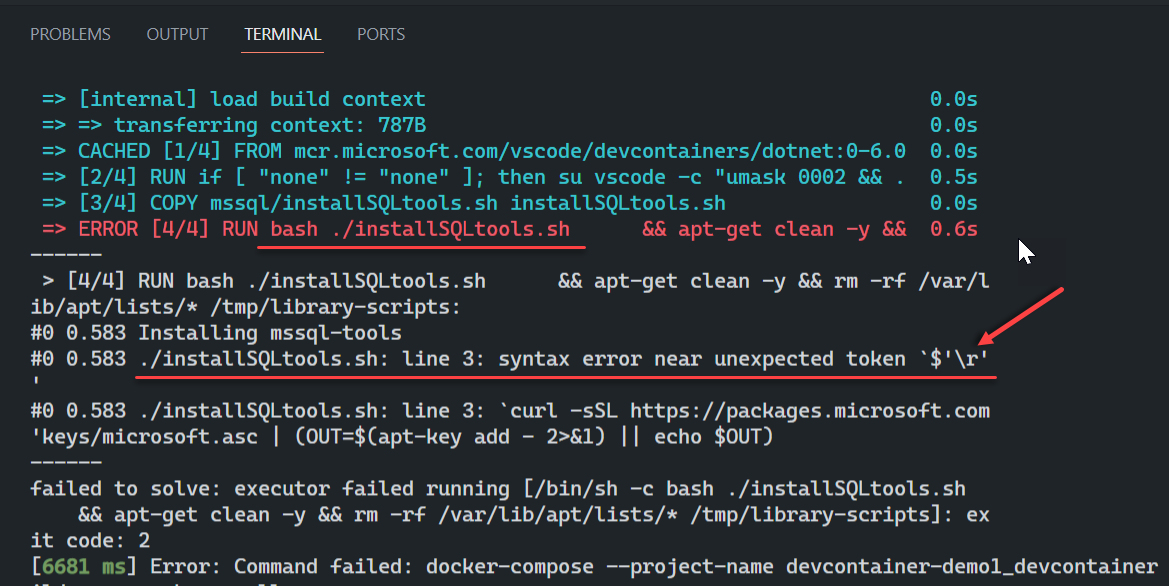 When the problem occurred, it wasn’t very understandable at first, but you should now know very well that it was the line break that caused the error!

The most standard solution to this problem is as follows.

You should be able to build the container again this time! 👍

This problem is actually not likely to occur in macOS or Linux, only Windows users will encounter this situation, which makes me wonder if no Microsoft engineers are using Windows anymore ah? 😅

However, I still think that as long as you are a Windows-loving developer like me, you should understand the difference between CRLF and LF, so that you will step on fewer mines in the process of containerization in the future.