Development based on Ubuntu 18.04.

Download and install from llvm, version 9.0 is more compatible.

As described in the official website, Envoy is a high-performance proxy service software, supporting L4 and L7 proxy capabilities. But Envoy is not a product that completely repeats the wheel, Envoy’s underlying network part of interaction with the operating system is libevent.

libevent is a lightweight network event library that provides the ability to handle callbacks for events such as reading and writing to the underlying socket.

From the above, we can naturally understand that we handle the four events lister/read/write/signal for listening.

Continuing from the above, the positioning of libevent in Envoy is also on the bottom side, and the packets obtained by different events will be truly twisted to Envoy’s internal system for processing, let’s take a common example of reading. But before we talk about this, let’s take a look at the entry definition of Envoy’s code.

Leaving aside the system-compatible code, we can find that, like most system designs, we have a bottom-level design called MainCommon, which allows us to locate the real startup location through a big type jump.

Ignoring the code around ➀, we actually find that our final main loop is here. After a lot of jumping around, we finally peel back the layers and see the Libevent part. Referring to the thread pattern at ➁.

The ➀ processing just happens to be the Loop loop for the Libevent we eventually built.

The event_base will only stop working when there are no registered events inside it. The next step is to find out when and where we created the various events for the event_base?

Not surprisingly, after some careful investigation, we can find the logic for listening to the port in ListenerImpl::setupServerSocket.

This is different from Netty and other network frameworks, Libevent is a global event listener library, he can listen to different ports, recall, Socket is not distinguished as Server Socket and Client Socket, exactly, what is done here, is to create a Server Socket and listen to its listenCallback, which is the event when a new connection is created.

In the last line it is clear that when our ServerSocket gets a new client connection it will pass the file handle fd.

Editor’s note: The idea here is that everything is a file, and Libevent’s Read callback is not used here, so this FD is already passed to Envoy’s system when it is created here.

When we look further, the logic of the callback function here when we are actually receiving a network request is as follows.

➀ FilterChain is created here for the socket. ➁ Press the socket into the queue to be processed, from here we can venture to assume that for the Socket that has established a connection with the server, Envoy will use a thread management similar to the Reactor pattern of the Netty type. That is, the receiving thread is the Listener, and the real Worker will get the working Socket from the List here.

After another series of operations, we come to the place where we create a new connection (actually, it’s more like assigning a new connection) ConnectionHandlerImpl::ActiveTcpListener::newConnection.

But here we still can’t find the logic of Read, so we start Debug and we set a breakpoint at the read data ConnectionImpl::onRead.

We still find that the starting point is still event_base_loop, so our question naturally becomes, where exactly is the event registered, because we know that the registration in is event_base object, we look by way of usage and find a suspicious point FileEventImpl:: assignEvents.

It looks like the event assignment is made here, we set a breakpoint and run it again. From the stack of calls, we can clearly see that 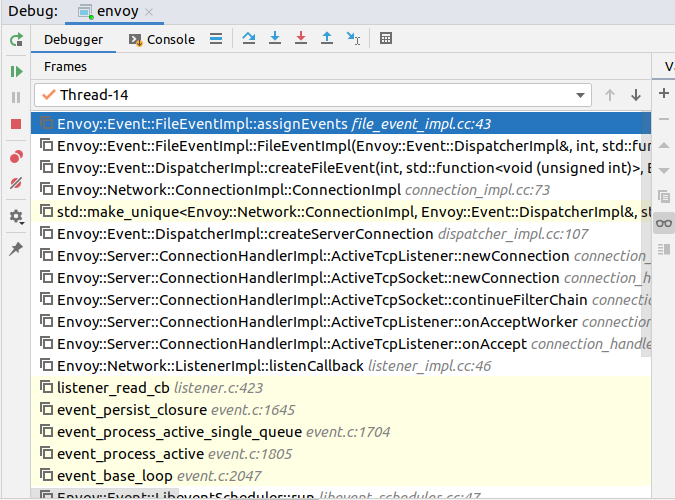 In OnAccpet -> newConnection -> AssignEvents such a logic, just because the stack of the whole process is too deep for us to easily discover, the registration of events is created when the socket of the client is created. The rest of the registration logic is in the libevent section, so we won’t go deeper.

First you can read the Envoy threading model

In Envoy Libevent acts as a lower-level lib dependency, just like Tomcat when we write SpringWeb, for Socket events such as reads and writes are delegated to Libevnet. The first step is to create a Listen event for our Event_base. After that, when the connection is established, Envoy adds the listen for the Read/Write events of the socket. 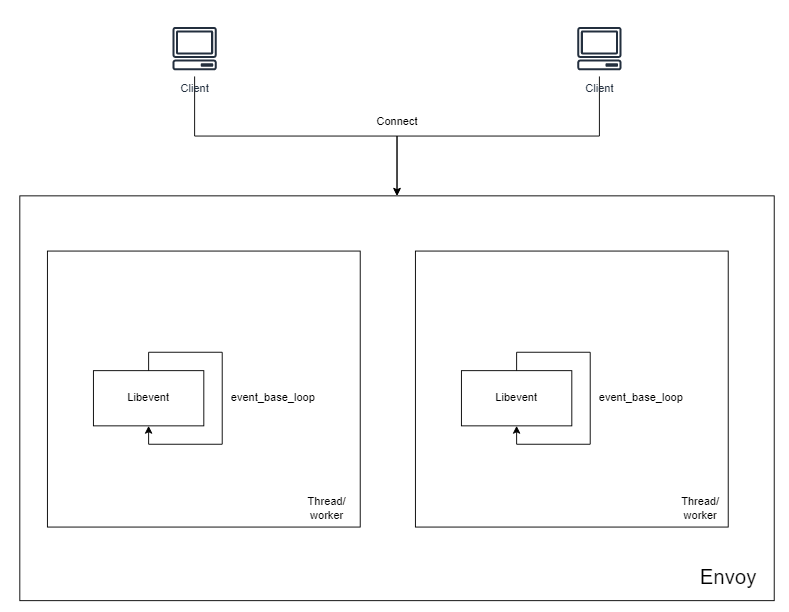 Unlike the processing of Netty, the Listener here is also distributed among all Threads. That is, when a new request is received, one of the workers is randomly selected for processing.

In the above, we already know that in the Listen event created by ClientSocket, we registered the Read/Write event of this Socket to Event_Base, and in the registered event, we easily locate ConnectionImpl::onRead This is where the read logic is.

➀ For Envoy, it also specifies a series of abstract qualifications for the Fitler. For example, Network::ReadFilter defines a series of ReadFilter dummy functions, and we can see that at the first Filter, we call onNewConnection Here is necessarily a lifecycle callback function, as for the specifics we need to check the specific implementation class to determine.

➁ From here we find the logic of the real read data. From here because the focus of this article is on the processing of the Http protocol, we here at ReadFilter will also look at Http::ConnectionManagerImpl the implementation mechanism of this class.

In the process of implementation here, we at least found that envoy’s Filter is not like Java’s Fitler which is called layer by layer, each layer will only do its own thing, because from the code, we can find these because if the normal processing process, we should go through all the Fitler, so based on this logic, we can tell that in this s logic, we should just decode the HTTP, however, in the actual breakpoint, there is actually an optimization in this codec that when we Pase the HTTP request, the logic will be processed directly here, specifically jumping to the following.

At ➀ you will enter the Route stage (in fact, I think the design here is not very clear, resulting in having to resort to Debug tools during the reading process), where you finally enter the ConfigImpl::route logic.

The next step in the processing logic is determined by whether or not the hit Route is returned. In the logic that follows, we follow the breakpoint to the

In the ConnectionManagerImpl::ActiveStream::decodeHeaders code there is a lot of logic to deal with httpheader, here we do not expand, we enter, the most important decodeHeaders function to continue our exploration, in the logic here, we can find Here a very complex logic processing, we slowly look at.

In upstream_requests_.front()->encodeHeaders(end_stream), there is a different step

➀ Here we create a downstream connection. as we explore deeper into our code.

We can see here that I’m actually going to create a downstream connection. But we know that for a high-performance WebServer, we can’t Blocking for downstream access, so our common processing capability should be to hang the downstream request after it is established, and we wait for the return of the downstream before processing it, so later we can find that

When we create the downstream link, we register the Read and Write events of the downstream reply data to the Event_Base of the current Worker thread. Let’s take a look at the whole flow of the first half here.

Up to the above, we have gone through most of the process from receiving the request to creating the request to the downstream, after which there are some other transactional ones that need to be handled, such as response timeout, etc. Without going too deep, we move to the next link: the response data processing link.

For the response data, we also know that after we finish the execution, we load the subsequent read and write events to BackendSteam into EventBase Let’s see how the subsequent data is handled, the entrance is still the OnRead() function, and the logic after that is similar to the previous one, until FilterManagerImpl:: onRead is called after the specific implementation class is CodecClient will be relatively simple after all, because the response body we do not need to do any more routing settings and other operations, and then when we finish reading, we enter the ConnectionImpl::onMessageCompleteBase function, and enter the end of the process. Let’s see how we respond to the initial caller when we’ve finished reading all the data from the response stream. Then it goes to ClientConnectionImpl::onMessageComplete.

During the response, decodeData is called and eventually returns to ConnectionMangerImpl, and then in a series of operations, we come to the place where we finally write.

After all our data has been written, we enter the final Cleanup process.

Here is the end of a paragraph, we will organize the whole process.

From the analysis above, we have sort of read through the main implementation part of the code, leaving us to look at the part of Envoy that sets aside extensions for us. Extending Envoy for custom use cases, from the configuration file, we can also get some inspiration.

We can find that the most important part for Envoy is FilterChains, although we have not written CPP, but from the similarity of ideas, we should be able to expand the implementation of Filter, and then registered to this FilterChians, fortunately for the official, provide a more detailed DEMO. As you can see from it, our core is to inherit the Interface of the Fitler that is already there and then implement it.

It is also relatively easy to use.

But behind the scenes, how does the mechanism of this work? We still need to come from the source code. The existing Extensions implementation can be found here extensions

From the code above, we can easily locate the logic to initialize the FilterChain at ListenerImpl::createNetworkFilterChain.

Then the problem becomes our Filter_Factory from which we find two implementations from the virtual table Admin & Impl, if you have read the official website documentation you should be able to guess that the Admin implementation is based on dynamic requests. I’d better restart and trace the process from the beginning. Initializing FilterFactory can be located at the earliest to ListenerManagerImpl::addOrUpdateListener and the profile hierarchy is similar, we create Listerner from the first, in the process of creating Listener we create FilterChain.

When we build the Example, there is a paragraph.

is the administrative port for Enovy. It mainly provides a series of statistics, etc. See Envoy-Admin for details

We analyzed the simple process of reading from a file, but for a full-fledged gateway, the type of dynamically loaded data is indispensable, so Envoy also provides several capabilities to dynamically obtain configurations, such as LDS, XDS, etc.

The listener discovery service (LDS) is an optional API that Envoy will call to dynamically fetch listeners. Envoy will reconcile the API response and add, modify, or remove known listeners depending on what is required.