A few years ago, I called Kubernetes the de facto standard for service orchestration and container scheduling, and today K8s is the unchallenged “kingpin” of the space. However, while Kubernetes has evolved to become very complex today, the original data model, application model and scaling approach of Kubernetes is still valid. And application models and scaling methods like Operator are becoming increasingly popular with developers and operators.

We have stateful backend services inside our platform. Deployment and maintenance of stateful services is the specialty of k8s operators, so it’s time to look at operator.

The concept of the kubernetes operator originally came from CoreOS, a container technology company acquired by Red Hat.

CoreOS introduced the operator concept along with the first reference implementations of the operator: the etcd operator and the prometheus operator.

Here is CoreOS’s interpretation of the concept of Operator: Operator represents in software the human knowledge of operations and maintenance through which an application can be reliably managed.

The original purpose of Operator was to free up operations staff, and today Operator is becoming increasingly popular with cloud-native operations developers. 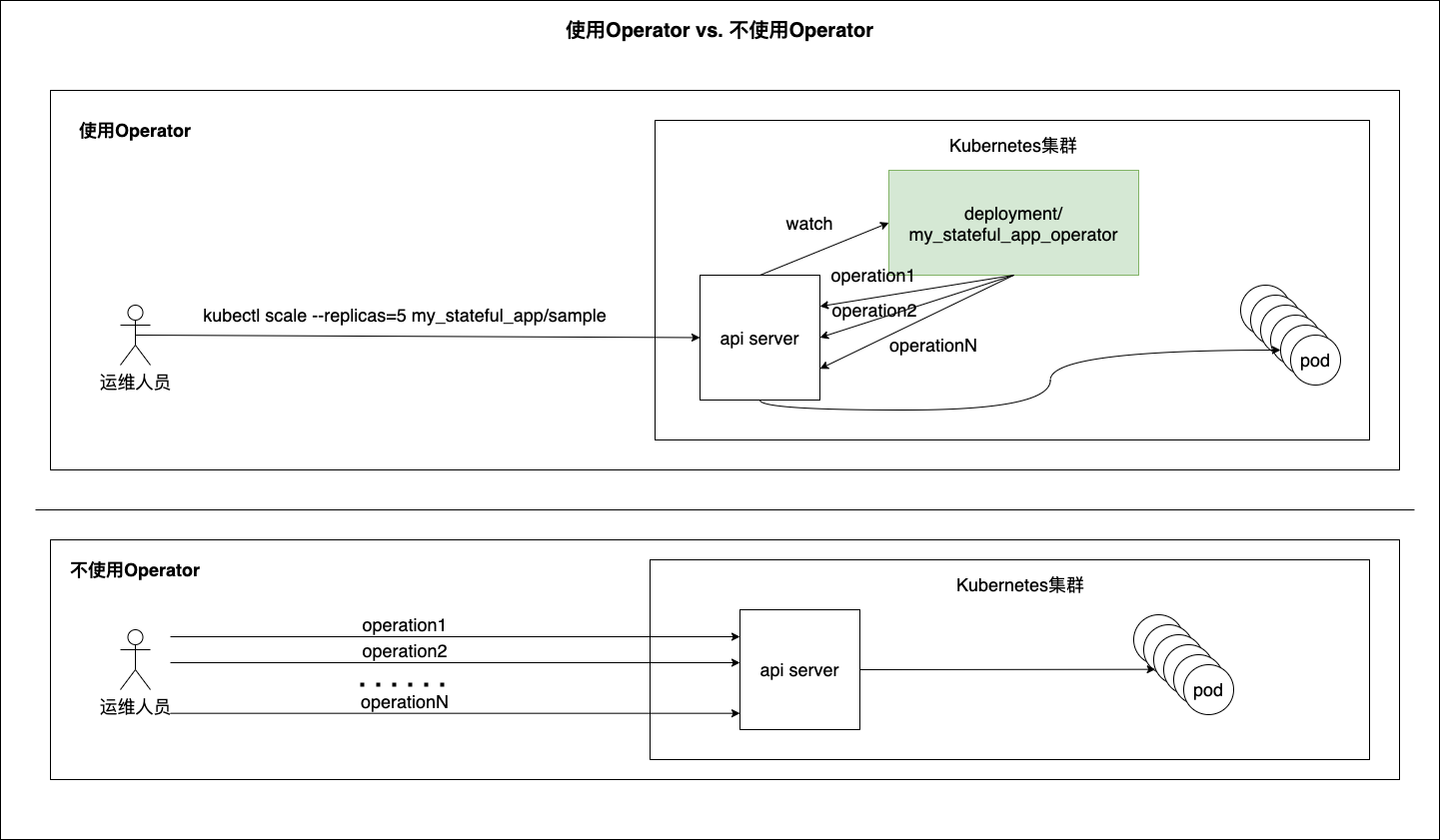 This diagram gives you an idea of the benefits of operators, even if you don’t know much about them.

In the absence of an operator, Ops needs to have a deep knowledge of the steps of stateful application scaling, and execute the commands in a sequence one by one and check the command response, and retry in case of failure until the scaling succeeds.

We see operator as an experienced operator built into k8s, monitoring the state of the target object at all times, keeping the complexity to itself, giving the operator a simple interface to interact with, and at the same time operator reduces the probability of operational errors caused by the operator for personal reasons.

Of course, among these thresholds, understanding the concept of operator is both the foundation and the prerequisite, and understanding operator in turn presupposes a deep understanding of many concepts of kubernetes, especially resource, resource type, API, controller, and the relationship between them. Let’s take a quick look at these concepts.

Kubernetes has evolved to the point where its essence has become apparent.

The following is a schematic representation of the relationship between the Kubernetes API and RESOURCE. 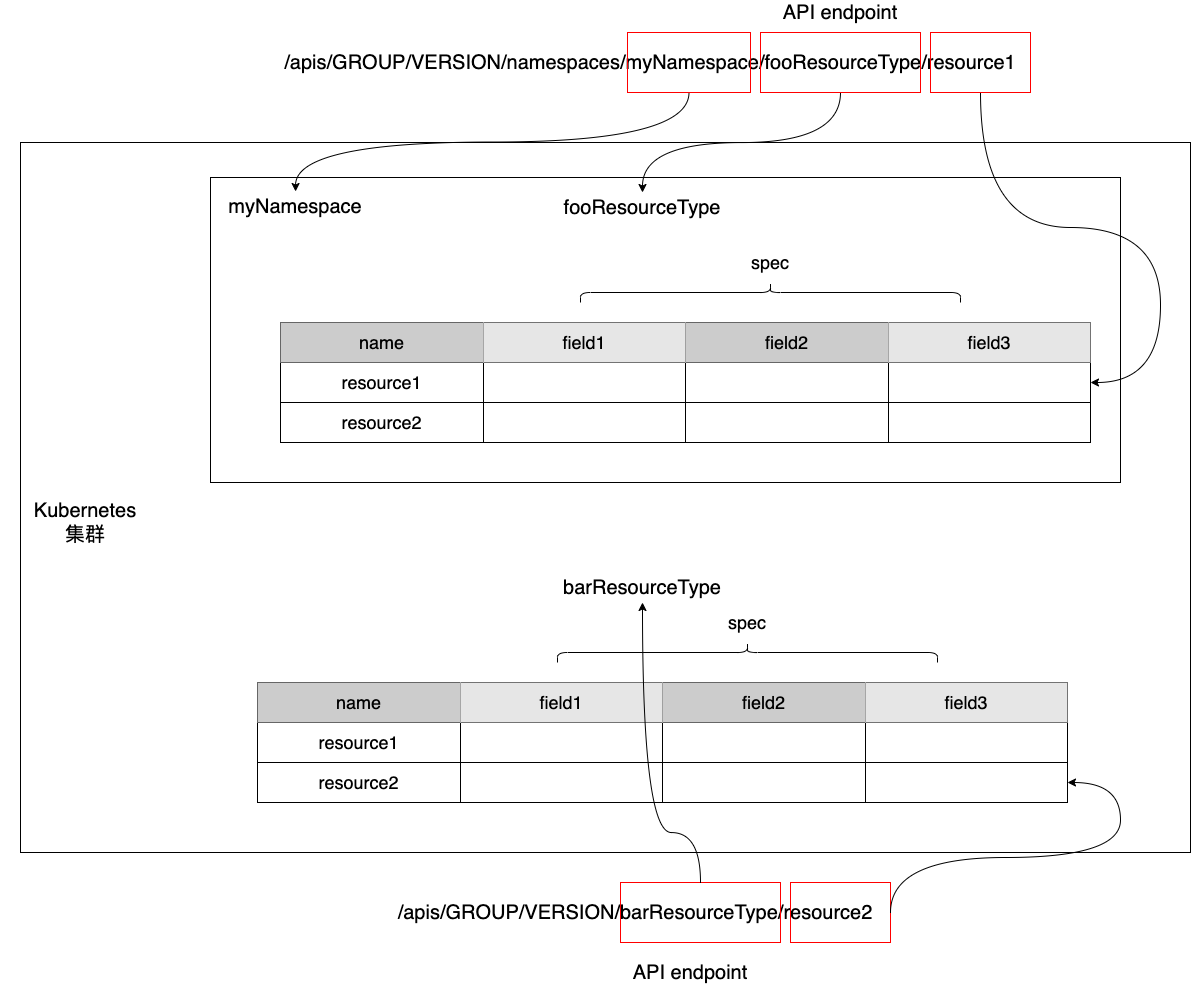 We see that there are two types of resource types, one namespace-related (namespace-scoped), and we manipulate instances of such resource types by means of an API of the following form.

The other class is namespace-independent, i.e., cluster-scoped, and we operate on instances of this type of resource type through the following form of API.

We know that Kubernetes is not really just a “database”, it is a platform standard for service orchestration and container scheduling, and its basic scheduling unit is a Pod (also a resource type), which is a collection of containers. How are Pods created, updated and deleted? This can’t be done without a controller. Each type of resource type has its own controller . Take the resource type pod as an example, its controller is an instance of ReplicasSet.

The operating logic of the controller is shown in the following diagram.

Note: There is a concept of object in k8s? So what is an object? It is similar to the Java Object base class or the Object superclass in Ruby. Not only is the instance resource of a resource type an (is-a)object, but the resource type itself is also an object, which is an instance of the kubernetes concept.

With the above initial understanding of these concepts of k8s, let’s understand what Operator really is!

According to our understanding of resource type, defining a CRD is equivalent to creating a new “table” (resource type), and once the CRD is created, k8s will automatically generate an API endpoint for us corresponding to the CRD, and we can manipulate it through yaml or API. We can manipulate this “table” through yaml or API. We can “insert” data into the “table”, i.e., create a Custom Resource (CR) based on the CRD, which is like creating a Deployment instance and inserting data into the Deployment “table”.

Like the native built-in resource type, it is not enough to have a CR that stores the state of the object, the native resource type has a corresponding controller responsible for coordinating the creation, scaling and deletion of instances. CR also needs such a “coordinator”. That is, we also need to define a controller to listen to the CR state and manage the creation, scaling, and deletion of CRs, as well as to keep the desired state (spec) consistent with the current state (current state). This controller is no longer an instance of the native Resource type, but a controller for the CRD-oriented instance CR.

4. Developing a webserver operator with kubebuilder

Assumptions: At this point, your local development environment has everything you need to access your experimental k8s environment, and you can manipulate k8s at will through the kubectl tool.

A more in-depth explanation of the concept is not as helpful as a real-world experience to understand the concept, we will develop a simple Operator.

A more in-depth explanation of the concept is not as helpful as a real-world experience to understand the concept, we will develop a simple Operator.

According to the operator capability model, our operator is almost at this level of level 2. We define a resource type of a webserver, which represents an nginx-based webserver cluster, and our operator supports the creation of webserver examples (an nginx cluster), support for nginx cluster scaling, and support for version upgrades of nginx in the cluster.

Let’s use kubebuilder to implement this operator!

Here we use the source code build method to install, and the steps are as follows.

Then just copy bin/kubebuilder to one of the paths in your PATH environment variable.

Next, we can use kubebuilder to create the webserver-operator project.

3. Creating the API and generating the initial CRD

The Operator consists of a CRD and a controller. Here we create our own CRD, i.e., a custom resource type, which is the endpoint of the API, and we use the following kubebuilder create command to complete this step.

After that, we execute make manifests to generate the yaml file corresponding to the final CRD.

At this moment, the directory file layout of the entire project is as follows.

4. The basic structure of the webserver-operator

Ignoring things like leader election, auth_proxy, etc. that we don’t care about this time, I’ve organized the main parts of this operator example into the following diagram. 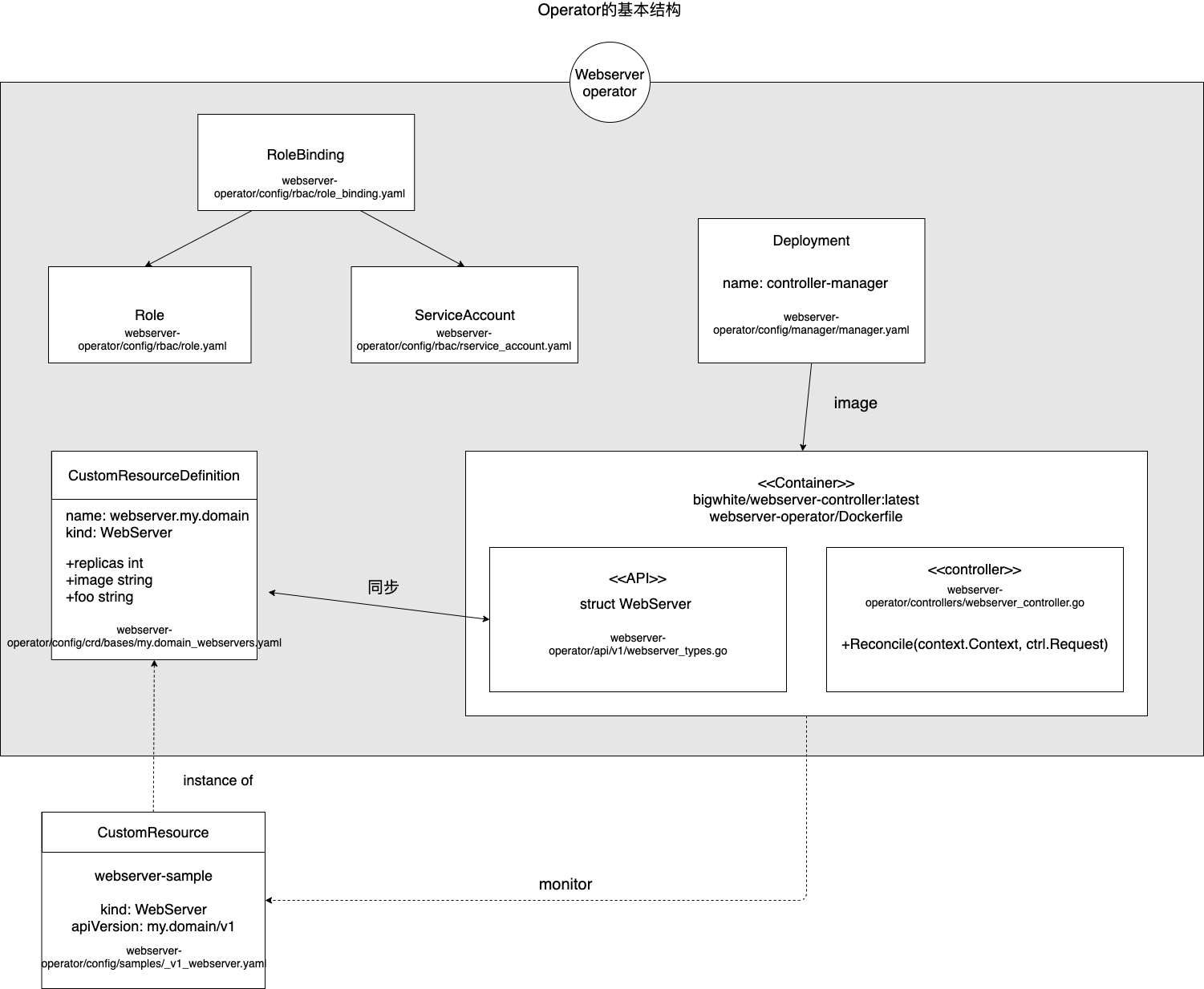 The parts of the diagram are the basic structure of the operator generated using kubebuilder.

The webserver operator consists mainly of a CRD and a controller.

After saving the changes, execute make manifests to regenerate config/crd/bases/my.domain_webservers.yaml

Once the CRD is defined, we can install it into k8s.

Before we start the controller development, let’s “pave the way” for the subsequent operation of the controller, i.e., set the appropriate permissions.

The modified role.yaml will be placed here first and then deployed to k8s together with the controller.

kubebuilder builds the code framework of the controller for us, we just need to implement the Reconcile method of WebServerReconciler in controllers/webserver_controller.go. Here is a simple flowchart of Reconcile, it is much easier to understand the code with this diagram. 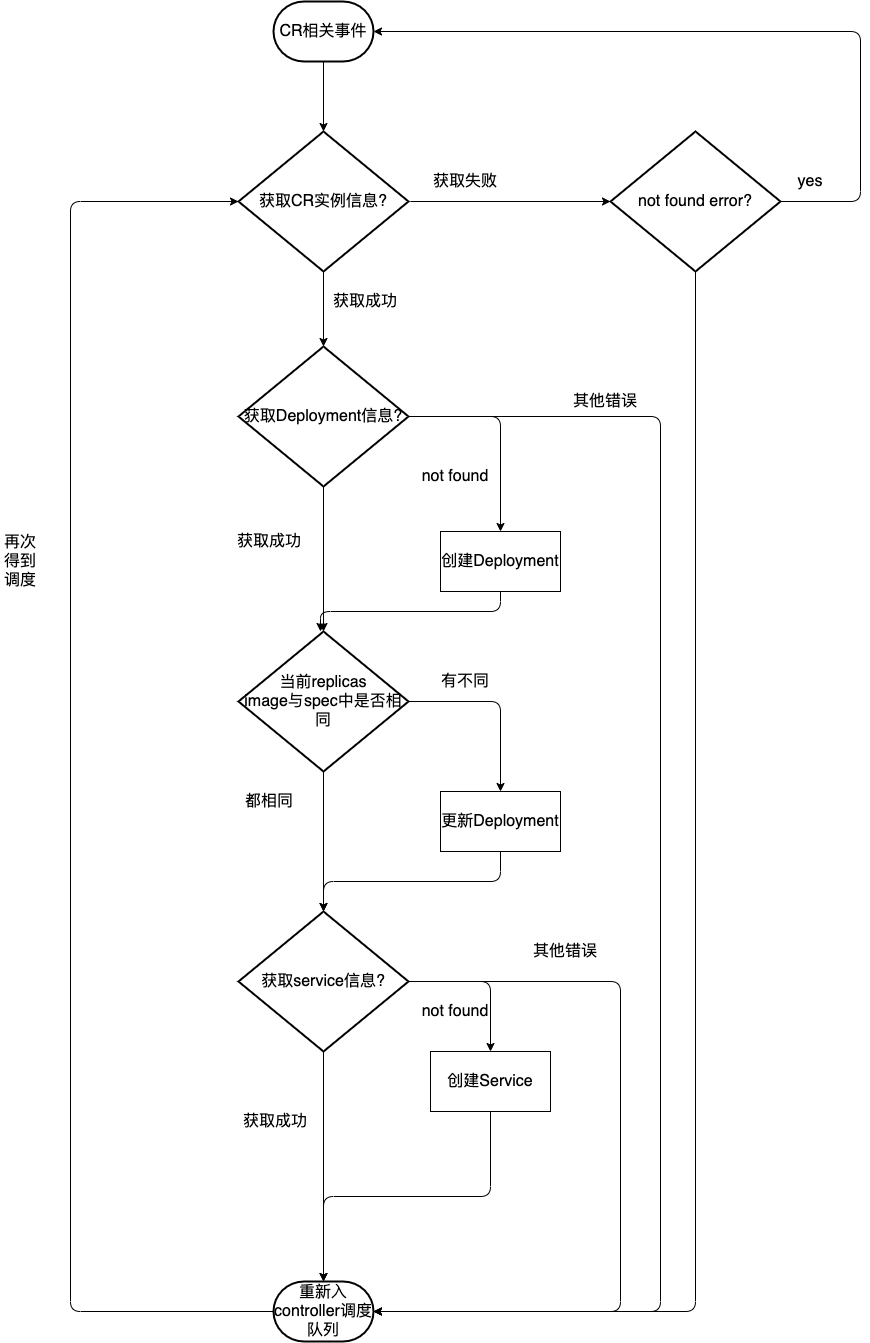 The following is the code for the corresponding Reconcile method.

Here you may find: The original CRD controller eventually translates CR into k8s native Resource, such as service, deployment, etc. The state changes of CR (such as here replicas, images, etc.) are eventually converted into a native resource such as deployment. This is the essence of operator! Understanding this layer, operator is no longer an inaccessible concept for everyone.

Some people may also find that the above flowchart does not seem to consider the operation of deployment and service when the CR instance is deleted, which is true. But for a 7×24 service running in the background, we are more concerned about its changes, scaling, upgrades and other operations, deletion is the lowest priority requirements.

After the controller code is written, we will build the controller image, which we know from the previous article is actually a pod running in k8s under deployment.

We need to build its image and deploy it to k8s via deployment.

The following are the steps of the build.

Note: Before executing the make command, change the initial value of the IMG variable in the Makefile to IMG ? = bigwhite/webserver-controller:latest

After a successful build, execute make docker-push to push the image to the image repository (the public repository provided by docker is used here).

We have already installed the CRD into k8s by make install, next we deploy the controller to k8s and our operator is deployed. Execute make deploy to achieve deployment.

We see that deploy not only installs controller, serviceaccount, role, rolebinding, it also creates namespace and also installs crd all over again. In other words, deploy is a complete operator installation command.

We use kubectl logs to view the controller’s operational logs.

As you can see, the controller has been successfully started and is waiting for a WebServer CR related event (e.g. creation). Let’s create a WebServer CR!

There is a CR sample in the webserver-operator project, located under config/samples, which we modify to add the fields we added in the spec.

We create this WebServer CR via kubectl.

We see that when the CR is created, the controller listens to the relevant events and creates the corresponding Deployment and service, so let’s take a look at the Deployment, the three Pods and the service created for the CR.

The service returns a response as expected!

Next, let’s do some common O&M operations on CR.

In this article, we have introduced the concept and advantages of Kubernetes Operator, and developed a level 2 operator based on kubebuilder, which is still a long way from perfection.

I believe that after reading this article, you will have a clear understanding of the operator, especially its basic structure, and will be able to develop a simple operator!

The source code for this article can be downloaded from here.