Linux provides the memory map feature, which implements the mapping of physical memory pages into the process address space for efficient data manipulation or transfer. The kernel uses three important data structures struct vm_area_struct , struct anon_vma and struct anon_vma_chain to handle this feature, so it is important to understand these three data structures, and this article tries to clarify the origin and connection between them.

The struct vm_area_struct is often referred to as vma in kernel code, so This structure is referred to by vma in the following.

vma is a unit of memory mapping, which represents a contiguous segment of the process address space, where the fields vm_start and vm_end indicate the starting virtual address of this contiguous segment. When creating a map using the mmap system call, the user specifies the start address (optional) and length, and the kernel will look for a legal vma in the process address space for the map accordingly. cat /proc/<pid>/maps allows you to see all the mapped intervals for a process.

The introduction of anon_vma needs some explanation.

When the Linux system runs out of memory, the swap subsystem releases some pages and swaps them into the swap device to free up extra memory pages. The idea of virtual memory is to maintain a mapping of virtual addresses to physical addresses through page-tables. However, page-table is a one-way mapping, i.e., it is easy to find a physical address through a virtual address, but conversely it is troublesome to find a virtual address through a physical address. This problem is more serious in the case of shared memory. The swap subsystem encounters this problem when releasing a page. For a particular page (physical address), it has to find the ``Page Table Entry (PTE)` mapped to it and modify the PTE to point to the location of that page in the swap device. In pre-2.4 kernels, this was a time-consuming task because the kernel had to traverse all page tables for each process to find all page table entries that mapped to that page.

The solution to this problem is to introduce the concept of reverse mapping. This is done by maintaining a data structure for each memory page (struct page) that contains all the PTEs mapped to that page, so that when looking for the reverse mapping of a memory page, one can simply scan this structure, which greatly improves efficiency. This is exactly what Rik van Riel did by adding a pte_chain field to the struct page, which is a pointer to a chain of all the PTEs mapped to that page.

Of course, it comes at a cost.

This cost was clearly intolerable, so Dave McCracken proposed a solution called object-based reverse mapping. His observation was that the costs described earlier came from the introduction of the reverse mapping field, whereas if there were all the page table entries that could be fetched from a struct page that mapped to that page, the field would not be needed, and there would be no need for these costs. He did find a way to do this.

The object in Dave’s scheme refers to the first type of memory page backup file. He calculates the PTE in a roundabout way by backing file object, which will not be described too much in this paper.

However, things are not so simple. When a process is copied by fork, as already mentioned, due to the semantics of COW, the new process just copies the page table of the parent process, which means that now one anonymous page has two page tables pointing to it, so the above simple reuse of the mapping field doesn’t work, because how can one pointer, represent two vma’s.

Andrea’s approach is to add an extra layer. Create a new struct anon_vma structure, which now has the mapping field pointing to it, and anon_vma which, not surprisingly, contains a link to all the vmas. Whenever a process forks a child process, the child process copies the vma of the parent process due to the COW mechanism, and this new vma is linked to the anon_vma of the parent process. In this way, every time a memory page is unmaped, the anon_vma pointed by the mapping field can find the vma chain that may be associated with that page, and traverse the chain to find all the PTEs mapped to that anonymous page. 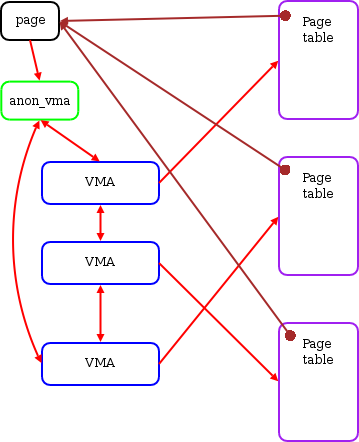 This has a cost, too, in that

However, this solution requires much less memory than adding a reverse mapping field to each struct page as mentioned above, so it is acceptable.

This is the end of the introduction of the anon_vma structure and its role.

The anon_vma structure was proposed to improve the reverse mapping mechanism, and it seems to be a perfect solution in terms of efficiency and memory usage. However, reality continues to pose problems. Rik van Riel, mentioned at the beginning, cites a workload example to argue against the flawed solution.

The previous anonymous page reverse mapping mechanism, when unmapping a page, accesses the vma linked list by accessing anon_vma and traversing the entire vma linked list, to find a PTE that might map to that page.

Rik’s solution is to add another layer, a new structure called anon_vma_chain:

Initially, we have a process with an anonymous vma.

Imagine that the process performs a fork operation, causing the child process to copy vma; now there is a new vma in isolation. 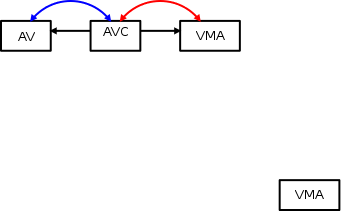 The kernel needs to link this vma to the anon_vma of the parent process; this requires adding a new anon_vma_chain. 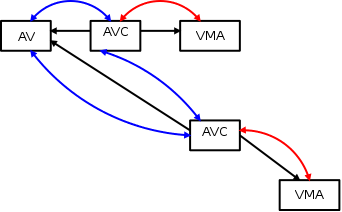 Note that the new AVC has been added to the same_anon_vma chain. The new vma also needs its own anon_vma : 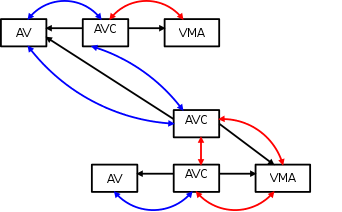 There is now another anon_vma_chain linked in the new anon_vma. The new AVC has been added to the same_vma linked list.

At this moment, according to the figure above, you can verify the role of the two chains in anon_vma_chain (AVC). 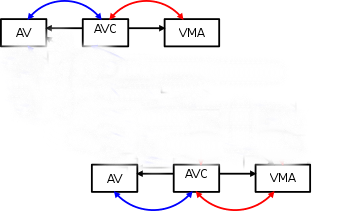 The name anon_vma_chain is like a glue and a chain that links the vma and anon_vma associated with the parent and child processes at the beginning, and when the child process has its own anonymous page through the COW, it will unlink the chain and manage it separately with a split policy, thus reducing the number of vma vmas traversed by the parent process when unmapping a page, which also reduces the corresponding lock conflicts and thus improves efficiency.