Since there are so many Linux distributions, in order to keep the directory structure uniform, the Linux Foundation maintains a standard called the Filesystem Hierarchy Standard (FHS) standard which defines the main directories and directory contents of the Linux operating system. Of course, not all Linux distributions strictly adhere to this standard. In addition, the FHS is very similar to the UNIX file directory structure.

In fact, the FHS has been continuously revamped based on past experience. The FHS defines directories as four types of interactions based on how frequently the file system is used and whether users are allowed to change them at will.

The FHS only specifies what directories should be in the /, /usr, and /var directories, but not the others. The following three diagrams summarize the various subdirectories under these three directories and what is placed in them.

Based on the above reasons, FHS believes that the root directory (/) should contain the following subdirectories.

In fact, the criteria defined by the FHS for the root directory are limited to the above table, but there are still some directories that we need to know about, as follows.

These five directories must not be separated from the root directory in a different partition. According to the basic definition of the FHS, the data in /usr is shareable and static. If you know how to mount partitions over the network, /usr can indeed be shared with other hosts on the local network.

/usr is not an abbreviation for user, in fact usr is an abbreviation for Unix Software Resource, the directory where Unix operating system software resources are located, not user data. This is important to note. FHS recommends that all software developers place their data in separate directories under this directory, rather than creating their own separate directories for the software.

This is because all the default software (software provided by the distribution publisher) is placed under /usr. This directory is similar to the combination of C:\Windows\ + C:\Program files\ on Windows systems, and it takes up the most hard disk space when the system is first installed. Generally speaking, the following subdirectories of /usr are recommended. If /usr is the directory that takes up more hard disk space during installation, then /var is the directory that will gradually take up more hard disk space after the system is running. This is because the /var directory is mainly for files that change on a regular basis, including cache, log files, and files generated by certain software operations, including lock files, run files, or files from MySQL databases, for example. Common subdirectories are as follows.

Since FHS only defines the file or directory data that should be placed in the top level (/) and the next level (/usr, /var), it is up to the developer to configure it in the other subdirectory levels. 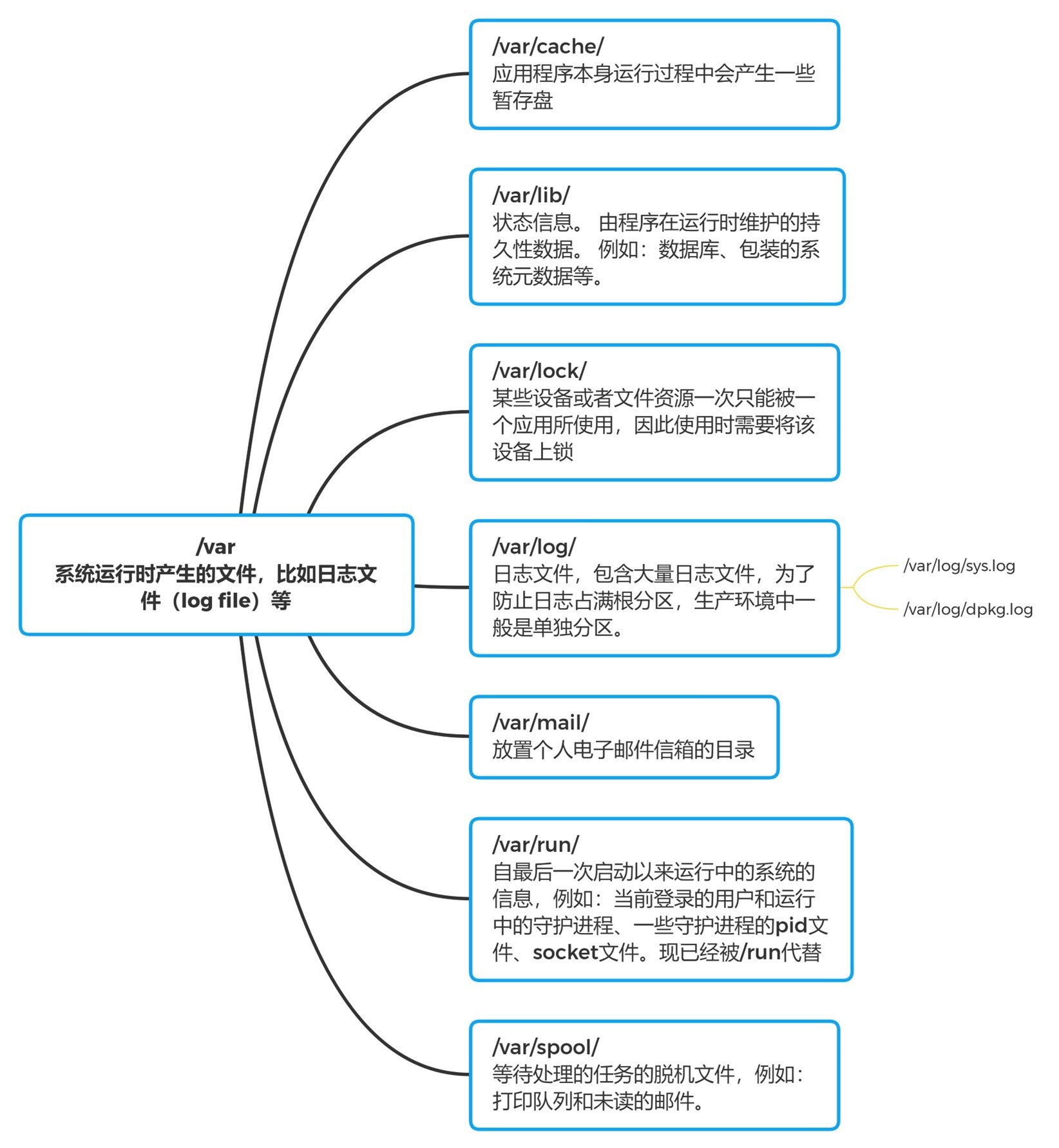 The Linux kernel provides a mechanism for accessing internal kernel data structures and changing kernel settings at runtime via the /proc file system, a pseudo-file system that exists only in memory and does not occupy external memory space. It provides an interface for accessing the system’s kernel data in the same way as a file system.

Users and applications can get information about the system through proc and can change certain parameters of the kernel. Since information about the system, such as processes, is dynamically changed, the proc file system is dynamically reading the required information from the system kernel and committing it when the user or application reads the proc file. Not all of these files or subfolders listed below are present on your system, depending on your kernel configuration and the modules loaded. In addition, there are three very important directories under /proc: net, scsi, and sys. The Sys directory is writable and can be used to access or modify kernel parameters, while net and scsi are kernel configuration dependent. For example, if the system does not support scsi, the scsi directory does not exist.

In addition to those described above, there are also some directories named with numbers, they are process directories. Each process currently running in the system has a corresponding directory under /proc with the PID number of the process as the directory name, and they are the interface to read process information. The self directory, on the other hand, is the interface to read information about the process itself, and is a link.

The following is information about process N in the /proc directory.

Which folder should I put my web applications in?

Debian and some other older systems still use /var/www as the default root for web services, but Arch uses /srv/http. A more elegant solution is to create a symlink: sudo ln -s /srv/http/ /var/www

The main purpose of specifying /srv is to allow users to find where the files for a particular service are located, so that services that require a separate directory for read-only data, writable data, and scripts (such as cgi scripts) can be placed in a reasonable location. Data of interest to a particular user should be available to all users in their home directory.

The method of naming the /srv subdirectory is not specified, as there is no consensus on how it should be named. One way is to organize the data in the /srv directory by protocol, such as ftp, rsync, www and cvs. For larger systems, it is useful to organize /srv by administrative environment, such as /srv/physics/www, /srv/compsci/cvs and so on. This step varies from server to server. Therefore, no program can exist on a specific /srv organization, nor can any data have to be stored in the /srv directory. However, on FHS-compliant systems, the /srv directory should always exist, and should be the default directory for such data.

Distributions must be aware that local files cannot be placed in these directories without administrator privileges.

Some parts of /var are not shared between systems. For example, /var/log, /var/lock, and /var/run. Other parts are shared, especially /var/mail, /var/cache/man, /var/cache/fonts, and /var/spool/news.

/var is specified to make it possible to mount /usr read-only. If a file, once in /usr, is writable for the duration of the system (as opposed to installation and software maintenance), then it must be in /var.

If /var can’t be a separate part, then it’s better to move /var from the root directory to /usr. (This is sometimes used to reduce the size of the root directory, or when there is not much space left in the root directory.) However, /var must not be linked to /usr, as this makes it more difficult to separate /usr from /var, and may lead to naming conflicts. Instead, link /var to /usr/var.

Applications usually do not add new directories to the top-level directory of /var. These directories can only be added if there are system-wide applications in them, and after consulting the FHS mailing list.