Reminder: If you want to quickly experience the demo made by stimulus.js, you can take a look at this todomvc-stimulus.

Speaking of my general impression of the stimulus.js framework, I think it is a very restrained front-end JavaScript framework. It focuses on the binding of HTML elements to JavaScript objects, and the binding is one-way, not the two-way binding that has long been common in front-end development. Beyond that, it offers no additional functionality.

Because of its restraint, lightweight is its inevitable first advantage. Secondly, with its designed concept of controller, it can achieve isolation and decoupling of state in the interaction logic. Finally, the organization of the controller code is familiar to those familiar with Rails development: convention over configuration. Each controller definition needs to follow the convention that a controller corresponds to a file in the controllers directory, with the same name as the controller.

There are very few core concepts in Stimulus.js, there are only 4 core concepts that you need to understand to get started with the stimulus.js framework.

Controllers are JavaScript objects bound to HTML elements that declare data attributes such as data-controller="todos".

stimulus.js will automatically instantiate the corresponding controller for all such elements, one instance of each. In the example above, stimulus.js automatically looks for the file located in app/javascript/controllers/todos_controller.js and imports the default classes exported there, a classic convention over configuration approach.

Of course, if you don’t want to use or can’t use the agreed form, you can also register the controller explicitly via the functions provided by stimulus.js.

Controllers can collaborate with each other by means of events, which will be added later when we talk about Actions.

Targets is another way to implement binding between HTML elements and JavaScript objects, but it works under a specific Controller.

The rule for declaring the target is data-<controller>-target=<target-name>, and accordingly, the object to be bound needs to be declared in the controller.

The above mentioned Controllers and Targets are binding functions between HTML elements and JavaScript objects, because HTML elements are loaded with the browser and subsequent DOM operations, which brings up the question, what is the lifecycle of these objects? 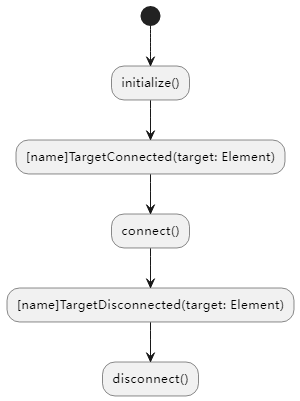 These lifecycle callback functions are all closely related to changes in the DOM, and generally look at these conditions.

Actions is the event callback mechanism in stimulus.js, similar to the syntax of onclick and onchange in HTML.

In this example, the flow of the program execution is as follows.

In this way, by abstracting different controllers to achieve the separation and decoupling of logic, and then through the event mechanism, the logic will be assembled and orchestrated.

Understanding these 4 core concepts is enough to develop a relatively simple front-end logic with stimulus.js. Of course, there are several other concepts in stimulus.js, but in my opinion they are just icing on the cake, so I don’t need to go into them here.

Also talk about the scenarios where stimulus.js is not suitable

Despite being a small project, there are some issues that I found cumbersome in using stimulus.js.

So, to sum up, if your front-end page is a heavy interaction page, it might not be a wise choice to use only stimulus.js. If I choose to use stimulus.js, I think it’s more comfortable to use stimulus.js if it’s a content-based light interaction scenario, such as blogs or forums, where the general interaction is the comment section, simple text input and additional display, etc.; but in other cases, I would probably go directly to vue.js or other more comprehensive framework to minimize the code that synchronizes state between the page and the logic.

Some things to keep in mind when using stimulus.js