The Virtual File System (VFS) is a software layer in the Linux kernel that provides a standard, abstract set of file operations in the kernel, allows different file systems to coexist, and provides a unified file system interface to user space programs. The following diagram illustrates the overall structure of the Linux virtual file system.

The System Call interface then passes the application’s parameters to the virtual file system for processing.

The benefit of VFS is that it decouples the application’s file operations from the specific file system, making it easier to program.

Linux views all file systems in terms of a set of generic objects, and the relationship between objects at each level is shown in the diagram below. 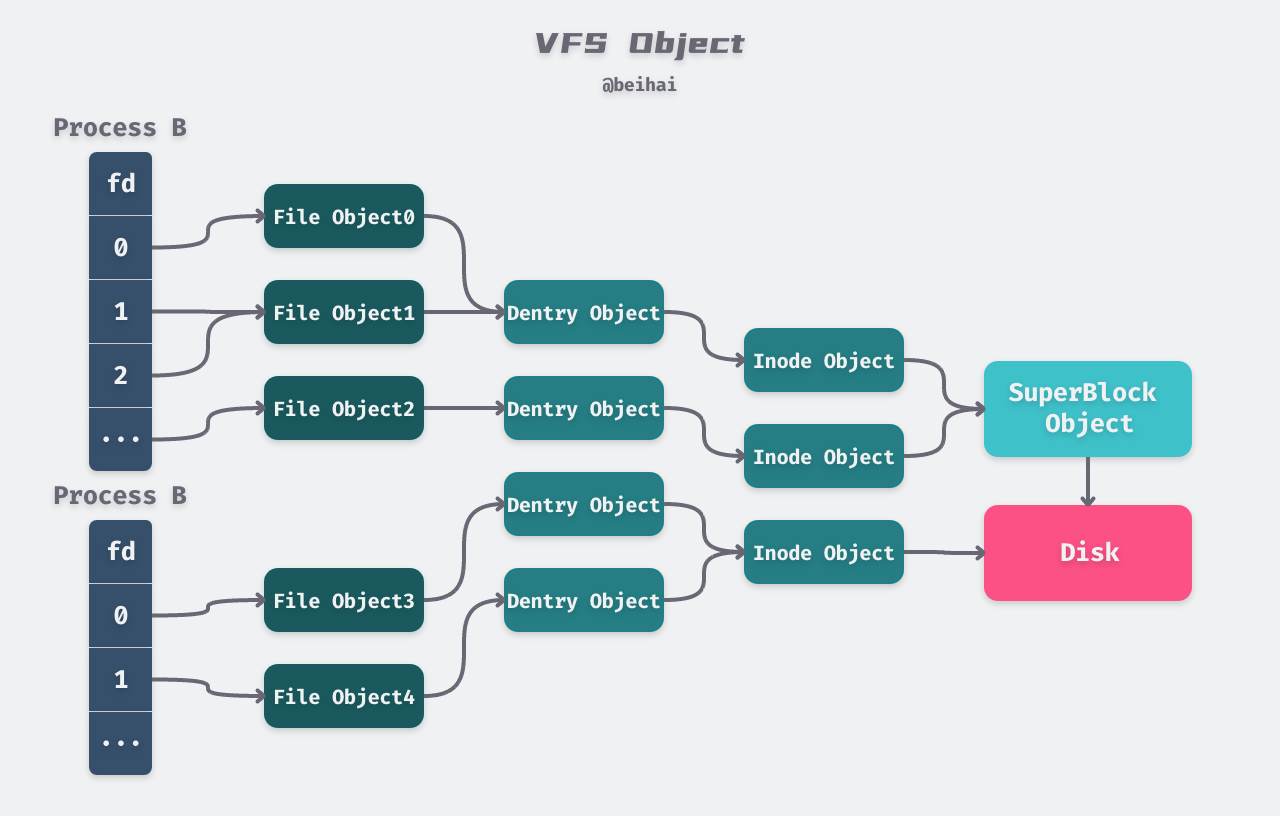 each process holds an fd[] array, which holds a pointer to a file structure; different fds of the same process can point to the same file object.

file is a data structure in the kernel that represents a file that is opened by a process and associated with the process. When an application calls the open() function, VFS creates the corresponding file object. It holds the status of the opened file, such as file permissions, paths, offsets, etc.

As you can see from the above code, the path to the file is actually a pointer to the DEntry structure, and VFS indexes to the location of the file via DEntry.

Except for the file offset f_pos, which is private to the process, all other data comes from INode and DEntry and is shared with all processes. The file objects of different processes can point to the same DEntry and Inode, thus enabling file sharing.

The Linux file system assigns two data structures to each file, a Directory Entry (DEntry) and an Index Node (INode).

DEntry is used to hold the mapping between file paths and INode, thus supporting movement within the file system. DEntry is maintained by VFS, shared by all file systems, and is not associated with a specific process. The dentry objects start at the root directory “/” and each dentry object holds its own subdirectories and files, thus forming a file tree. For example, if you want to access the file “/home/beihai/a.txt” and operate on it, the system will resolve the file path, starting with the dentry object in the root directory “/”, then finding the directory “home/”, followed by “beihai/”, and finally find the dentry structure of “a.txt”, the d_inode field inside the structure corresponds to the file.

Each dentry object holds a corresponding inode object, representing a specific directory entry or file in Linux.INode contains all the metadata needed to manage objects in the file system, as well as the operations that can be performed on that file object.

The virtual file system maintains a DEntry Cache, which is used to store the most recently used DEntry and speed up query operations. When the open() function is called to open a file, the kernel will first look for the corresponding DEntry in the DEntry Cache based on the file path, and if it finds it, it will directly construct a file object and return it. If the file is not in the cache, then VFS will load it down one level according to the nearest directory found until it finds the corresponding file. During this time VFS caches all the dentrys generated by the load.

The data stored in an INode is stored on disk and organized by a specific file system. when an INode needs to be accessed, the file system loads the corresponding data from disk and constructs an INode. an INode may be associated with more than one DEntry, i.e. it is equivalent to creating multiple file paths for a particular file (usually by creating hard links to the files).

A SuperBlock represents a specific loaded file system and is used to describe and maintain the state of the file system, defined by VFS, but populated with data based on the specific file system. Each SuperBlock represents a specific disk partition and contains information about the current disk partition, such as file system type, space remaining, etc. An important member of the SuperBlock is the chain s_list, which contains all modified INodes, using which it is easy to distinguish which files have been modified and to write the data back to the disk with the kernel thread. Another important member of SuperBlock is s_op, which defines all operations on its INode, such as marking, releasing index nodes, etc.

A SuperBlock is a very complex structure that allows us to mount a physical file system on Linux or to add, delete, or check an INode. That’s why file systems usually store multiple copies of SuperBlock on the disk to prevent accidental data corruption that could make the whole partition unreadable.

/proc is not a real file system, it does not take up storage space, only a limited amount of memory. However, /proc implements an interface to the virtual filesystem, allowing us to manipulate the contents of the /proc directory as if it were a normal file.

For more information about the usage of /proc, please refer to the document proc(5) - Linux manual page, in the Linux system similar to procfs There are also sysfs, tmpfs and other pseudo-file systems similar to procfs in Linux.

An important concept of Linux is that “everything is a file”, from here we can see that whether it is an ordinary file, a special directory, a device, etc., as long as the relevant interface is implemented, VFS can treat them as files equally and operate on them by the same set of file operations. When we open a file, VFS gets the file system format corresponding to that file, and when VFS passes control to the actual file system, the actual file system then makes specific distinctions and performs different operations on different file types.