Previously we explained the use of the Jenkins pipeline to implement CI/CD for Kubernetes applications, now we will migrate this pipeline to Tekton, in fact, the overall idea is the same, that is, to divide the entire workflow into different tasks to perform, the previous workflow stages are divided into the following stages: Clone code -> unit testing -> compile and package -> Docker image build/push -> Kubectl/Helm deployment services/.

In Tekton we can convert these phases directly into Task tasks, Clone code in Tekton does not require us to actively define a task, but only to specify an input code resource on top of the executed task. Here we will convert the above workflow step by step into a Tekton flow, with the same code repository as http://git.k8s.local/course/devops-demo.git.

Although we don’t have to define a separate task for Clone code, we can just use a git type input resource, because there are more tasks involved here, and many times we need to Clone code first and then operate, so the best way is to Clone the code and then share it with other tasks through Workspace, here we can directly use Catalog git-clone to achieve this task, we can do some customization according to their needs, the corresponding Task is as follows.

Generally we only need to provide the workspace for persistent code as output, and then include the url and revision parameters, and use the default for the rest.

The unit test phase is relatively simple, and normally it’s just a matter of executing a test command, so we’re not really executing a unit test here, so we can simply test it by writing a Task as shown below.

We’ve defined what we want to do in this phase, so writing the task is easy. Create the Task task as shown below, and first associate the code inside the clone task by defining a workspace.

The build task is also very simple, just we will need to use the environment variables directly through the env injection, of course, directly into the script is also possible, or directly use the command to execute the task can be, and then build the generated demo-app binary file to keep in the code root, so that can also be shared through workspace.

Next is to build and push the Docker image, we have introduced the use of Kaniko, DooD, DinD 3 modes of image construction, here we directly use DinD this mode, we have to build the image Dockerfile is very simple.

We can copy the compiled binaries directly to the image, so we also need to go through Workspace to get the products of the last build task, here we use sidecar to implement the DinD mode to build the image and create a task as shown below.

The point of this task is to declare a Workspace, and to use the same Workspace as the previous build task when executing the task, so that you can get the demo-app binary compiled above.

For the next stage of deployment, we can also refer to the previous implementation in the Jenkins pipeline, as we include the Helm Chart package in the project, so we can directly use Helm to deploy it, to implement Helm deployment, of course we need an image containing the helm command first, but of course we can write such a task ourselves, in addition we can also In addition, we can also look for Catalog directly on hub.tekton.dev, because there are many common tasks on it, such as helm-upgrade-from-source, which is a Task task that can completely satisfy our needs. 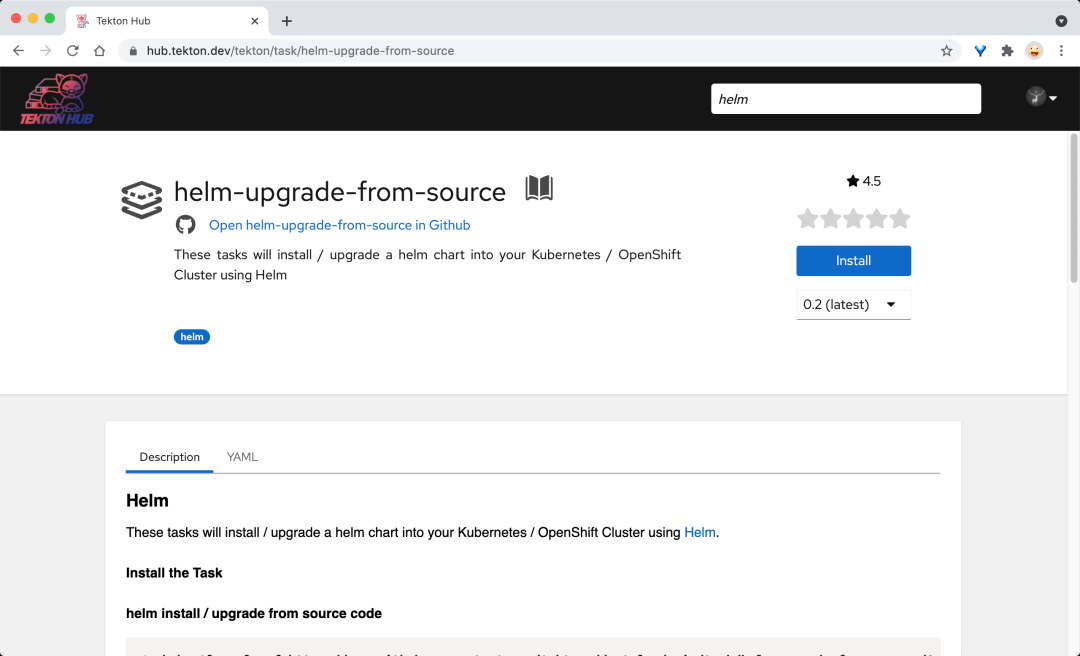 The Catalog also contains full documentation underneath, so we can download the task directly and make some customizations to suit our needs, as shown below.

Since our Helm Chart template is in the code repository, we don’t need to get it from the Chart Repo repository, we just need to specify the Chart path, and all other configurable parameters are exposed through the params parameter, which is very flexible, and finally we also get the status of the Helm deployment and write it to the Results for subsequent tasks.

Finally the application deployment may also need to be rolled back after completion, because there may be errors in the deployed application, of course this rollback is best triggered by ourselves, but in some scenarios, such as helm deployment has clearly failed, then we can of course automatically rollback, so it is necessary to determine when the deployment fails and then perform the rollback, that is, this task is not necessarily occurring, only in some scenarios, and we can do this in the pipeline by using WhenExpressions. To run a task only when certain conditions are met, you can protect the task execution by using the when field, which allows you to list a series of references to WhenExpressions.

The rollback task we created here is shown below.

Now that our entire workflow tasks have been created, we can link them all together to form a Pipeline, referencing the Task defined above to the Pipeline, and of course declaring the resources or workspaces used in the Task.

The overall process is relatively simple, that is, the Pipeline needs to first declare the Workspace, Resource, Params and other resources used, and then pass the declared data to the Task task, it should be noted that the last rollback task, we need to determine whether the task needs to be executed based on the results of the previous deploy task. So here we use the when property to get the deployment status via $(tasks.deploy.results.helm-status).

Now we can execute our pipeline to see if it meets our requirements. First, we need to create the other resource objects associated with it, such as the PVC for Workspace, and the authentication information for GitLab and Harbor.

After these associated resource objects are created, you also need to bind a permission for the above ServiceAccount, because in the Helm container we want to operate some cluster resources, we must first do the permission declaration, here we can bind tekton-build-sa to the edit ClusterRole.

We can then create a PipelineRun resource object to trigger our pipeline build.

Creating the above resource object directly will allow us to execute our Pipeline flow.

You can also see on the Dashboard that the pipeline is executing normally, and the rollback rollback task is ignored because the deployment is successful. 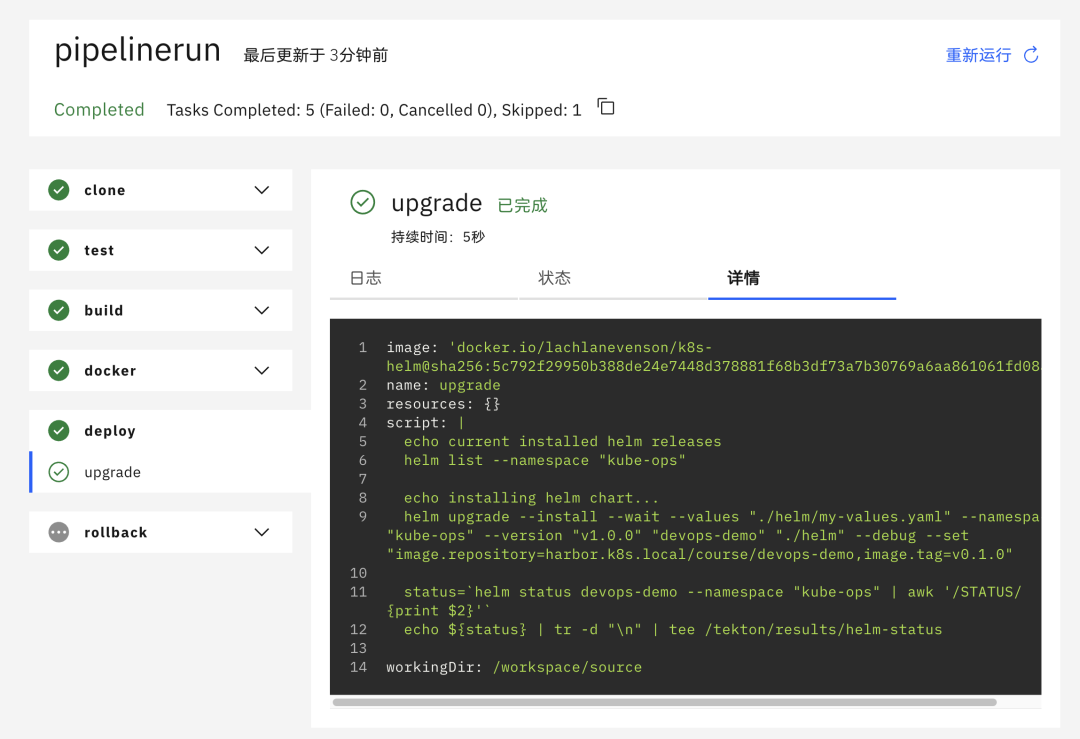 Now that the entire pipeline has been successfully executed, the last step is to interface Gitlab with Tekton, which means that the Tekton Trigger will automatically trigger the build. We’ve already covered Tekton Trigger in detail, so I won’t go into the details.

The first step is to add a Secret Token for Gitlab Webhook access. You’ll also need to associate this Secret with the ServiceAccount you used above, and then continue to add the corresponding RBAC permissions.

Next, you can create an EventListener resource object to receive Push Event events from Gitlab, as shown below.

Just create the new resource objects above, which will create an eventlistern service to receive webhook requests.

So make sure you also configure the Webhook in your Gitlab repository. 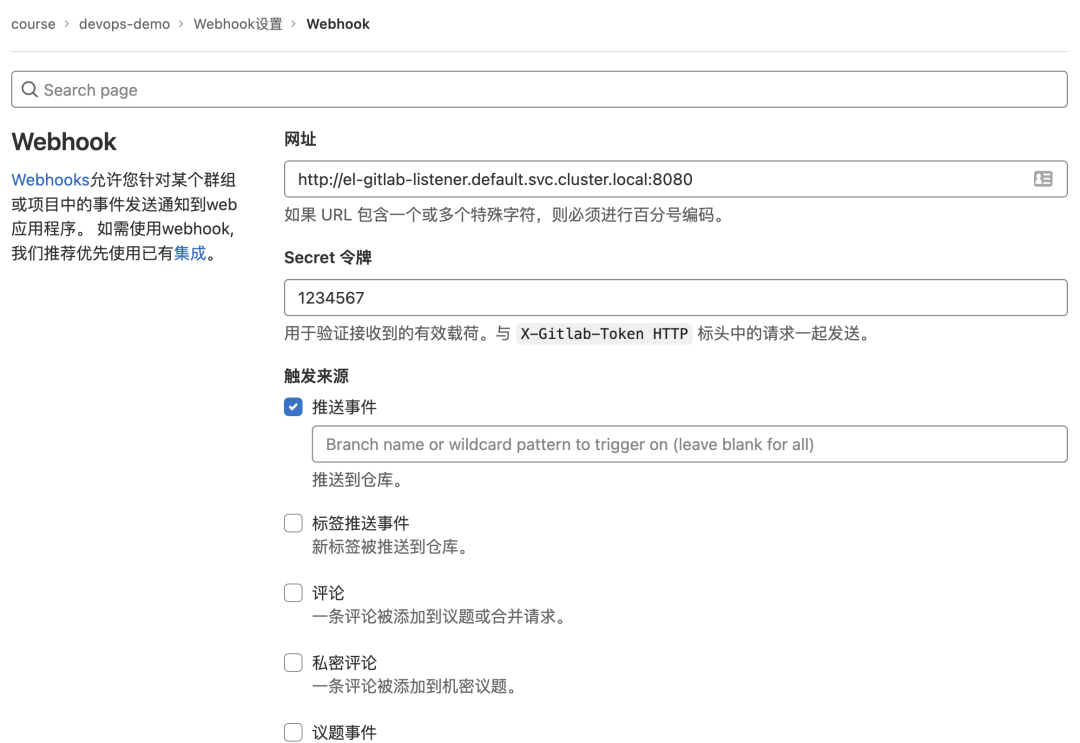 This way our entire trigger and listener is configured, next we go to modify our project code and commit the code, after normal commit a PipelinRun object will be created in the cluster to execute our pipeline.

You can see that the application has successfully deployed our newly committed code after the successful execution of the pipeline, and here we are done refactoring the project’s pipeline using Tekton.