With the expansion of system size, there are many distributed applications. For example, to ensure the high availability of Redis in a distributed system, we need to build Redis to slot the data, and when the data stored in MySql database reaches a certain size, we need to split the database. In addition to these typical distributed applications, for example, if we want to develop a distributed job scheduling system, the actual nodes executing the jobs have different configurations (CPU, memory, GPU, etc.) and are also distributed in different regions. How do we ensure that jobs are scheduled to the correct node as much as possible, and that the impact on job scheduling is minimized when a new node is added or a node goes down?

To be clear, the problem described above is how to map data objects to different machines according to certain rules, and the most intuitive way we can think of is a hash function, with the help of which we can know exactly which node the data object needs to be mapped to. But can ordinary hash functions solve the problem of mapping data objects that we encounter in distributed systems?

Let’s take the distributed job scheduling system mentioned above as an example, and associate it with the implementation principle of hashmap in Java, which calculates the hash value by hash function on the keys of job data objects. The simplest hash function is to perform a modulo operation on the total number of job execution nodes through the job data object, and the resulting hash value can be regarded as a “hash bucket”, which is the node to which the job should be scheduled.

This seems to be a simple solution to the data object mapping problem, but if we need to add some new compute nodes to the cluster as the system throughput increases, when we calculate the hash value of the data object again, the base of the modulo operation has changed, which will cause the result of data object mapping to change, that is, the nodes of job scheduling have changed, which For some jobs with special needs for configuration, the impact is huge. Therefore, we need to find ways to make this situation does not occur, the root of this situation is the characteristics of the hash algorithm itself, the direct use of modulo this can not be avoided.

The consistent hashing algorithm corrects the shortcomings of the simple hashing algorithm by ensuring that the system removes or adds a node with as little change as possible to the mapping relationship of existing data objects to the address space, i.e., it tries to satisfy the monotonicity of the hashing algorithm.

Consistent hashing algorithms are random in nature and do not strictly guarantee balance, for example, when the number of machines is small, numerical objects cannot be mapped evenly to all machines, in the above example, if only node A and node C are deployed, then node A stores only object1 while node C stores both object2, object3 and object4, such a mapping does not satisfy the balance requirement.

The introduction of virtual nodes can be a good solution to the problem of consistency hashing algorithm balance. 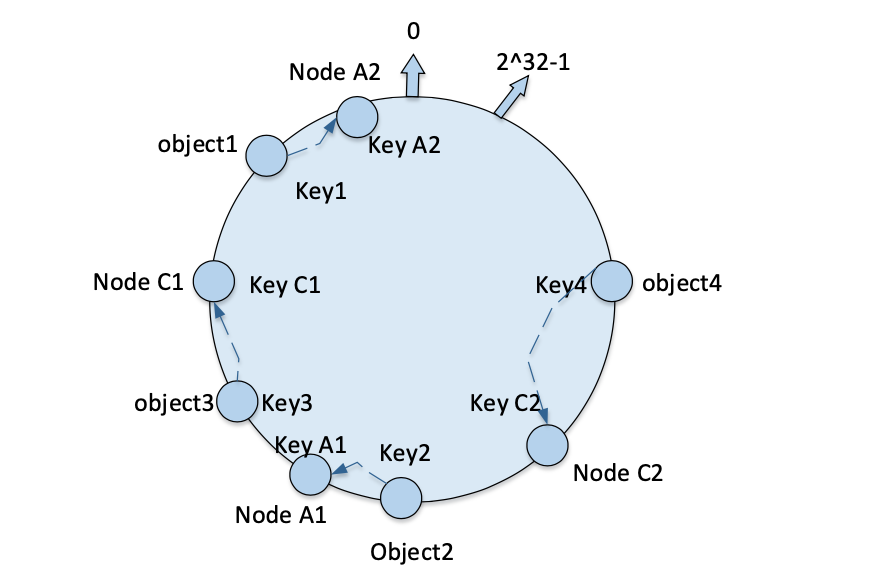 In this case, the mapping of objects to “virtual nodes” is as follows. 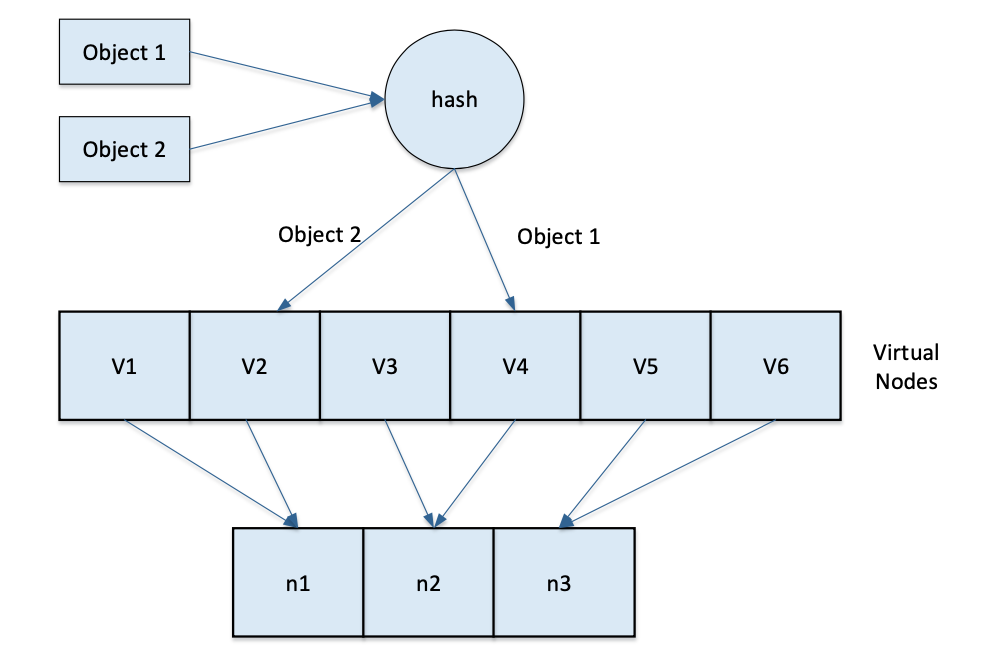 In general, distributed systems require hashing to distribute load evenly, however simple hashing is not enough to solve the problem of minimizing the impact when a distributed cluster changes, so consistent hashing is needed to ensure that the hash ring changes and the cluster only requires a minimal amount of work to adapt. In addition, nodes need to exist in multiple locations on the ring to ensure that the load is statistically more likely to be distributed more evenly. Finally, “virtual nodes” need to be introduced to solve the balancing problem, ensuring that the hash results are distributed across all address spaces, so that all address spaces are fully utilized and the system pressure load is balanced.