Cilium is a Kubernetes CNI plug-in based on eBPF technology, which Cilium positions on its official website as being dedicated to providing a range of eBPF-based networking, observability, and security solutions for container workloads. Cilium implements networking, observability and security related features by using eBPF technology to dynamically insert control logic inside Linux that can be applied and updated without modifying application code or container configuration. 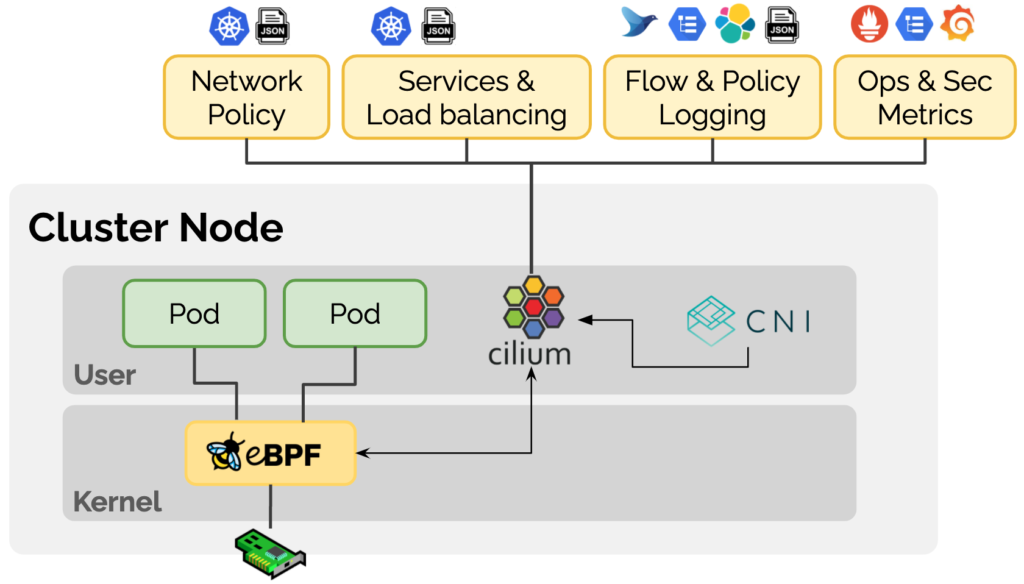 BGP (Border Gateway Protocol) is a dynamic routing protocol used between AS (Autonomous System), which provides rich and flexible routing control policies and was mainly used for interconnection between Internet AS in the early days. With the development of technology, BGP is now also widely used in data centers, where modern data center networks are usually based on Spine-Leaf architecture, where BGP can be used to propagate endpoint reachability information.

The Leaf layer consists of access switches that aggregate traffic from the servers and connect directly to the Spine or network core, which interconnects to all Leaf switches in a full-mesh topology.

As Kubernetes is increasingly used in the enterprise, these endpoints are likely to be Kubernetes Pods, and it was clear that Cilium should introduce support for the BGP protocol in order to allow networks outside of the Kubernetes cluster to dynamically obtain routes to the Pods they are accessing via the BGP protocol.

BGP was initially introduced in Cilium in version 1.10, by assigning LoadBalancer-type services to applications and combining them with MetalLB to announce routing information to BGP neighbors.

However, as IPv6 usage continued to grow, it became clear that Cilium needed BGP IPv6 functionality - including Segment Routing v6 (SRv6). metalLB currently has limited support for IPv6 via FRR and is still in the experimental phase. the Cilium team evaluated various options and decided to move to the more feature-rich GoBGP [1] .

In the latest Cilium 1.12 release, enabling support for BGP requires only setting the --enable-bgp-control-plane=true parameter and enables more granular and scalable configuration via a new CRD CiliumBGPPeeringPolicy.

The management interface of the container is connected to a Docker network of bridge type called clab, and the business interface is connected via links rules defined in the configuration file. This is similar to the out-of-band and in-band management models for network management in the data center.

Containerlab also provides us with a rich set of experimental examples, which can be found in Lab examples[4]. We can even create a data center level network architecture with Containerlab (see 5-stage Clos fabric[5] ) 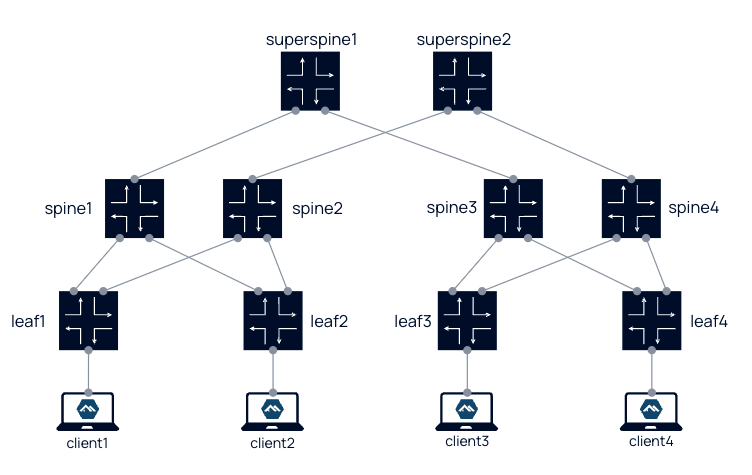 Please choose the appropriate installation method according to the corresponding operating system version:

The configuration files used in this article are available at https://github.com/cr7258/kubernetes-guide/tree/master/containerlab/cilium-bgp.

3 Starting a Kubernetes Cluster with Kind

Execute the following command to create a Kubernetes cluster via Kind.

Checking the cluster node status, the status of the node is NotReady as we do not have the CNI plugin installed yet.

Define the Containerlab configuration file, create the network infrastructure and connect to the Kubernetes cluster created by Kind.

Execute the following command to create the Containerlab experimental environment. 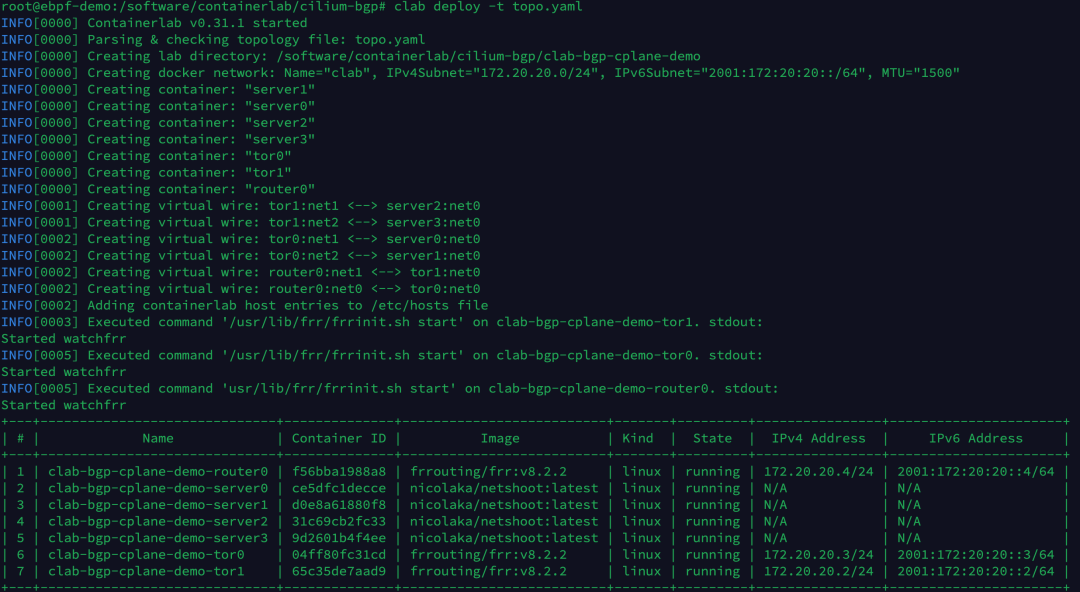 Execute the following command to view the BGP routing entries now learned by the router0 device.

There are currently a total of 8 route entries, and no Pod-related routes have been learned at this point.

To make it easier for users to visualize the network structure of the experiment, Containerlab provides the graph command to generate the network topology.

Enter http://<host IP>:50080 in your browser to view the Containerlab-generated topology diagram. 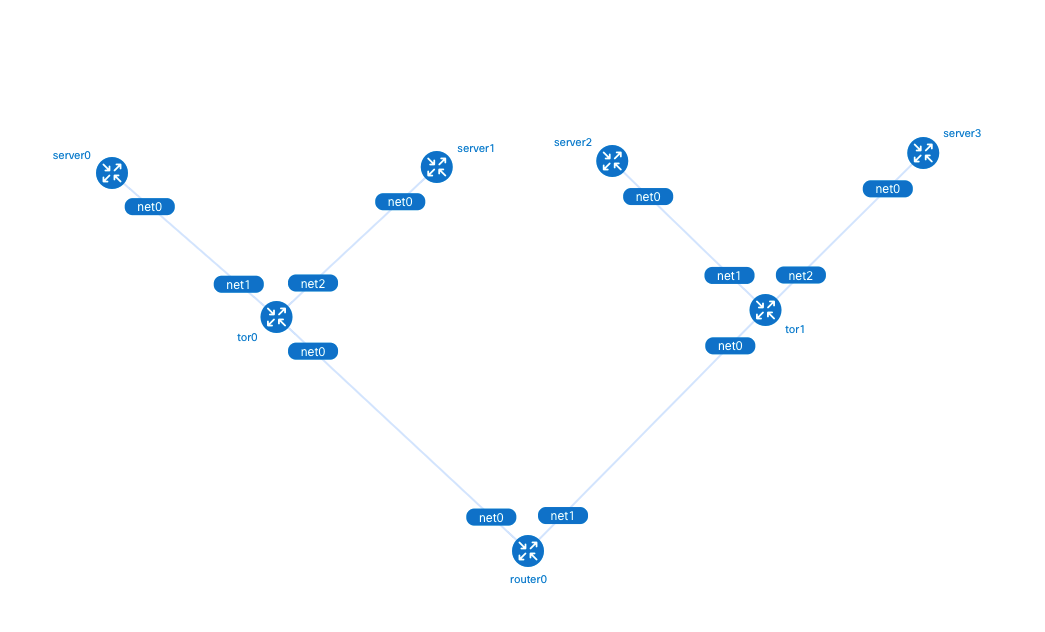 In this example, we use Helm to install Cilium and set the Cilium configuration parameters we need to adjust in the values.yaml configuration file.

Once all the Cilium Pods are started, check the Kubernetes Node status again and see that all the Nodes are in Ready state.

Next, configure the CiliumBGPPeeringPolicy for the Kubernetes Nodes on rack0 and rack1 respectively. rack0 and rack1 correspond to the labels of the Nodes, which were set in the configuration file of Kind in Subsection 3.

Execute the following command to apply the CiliumBGPPeeringPolicy.

The created topology is shown below. tor0 and tor1 have now also established BGP neighbors with the Kubernetes Node. 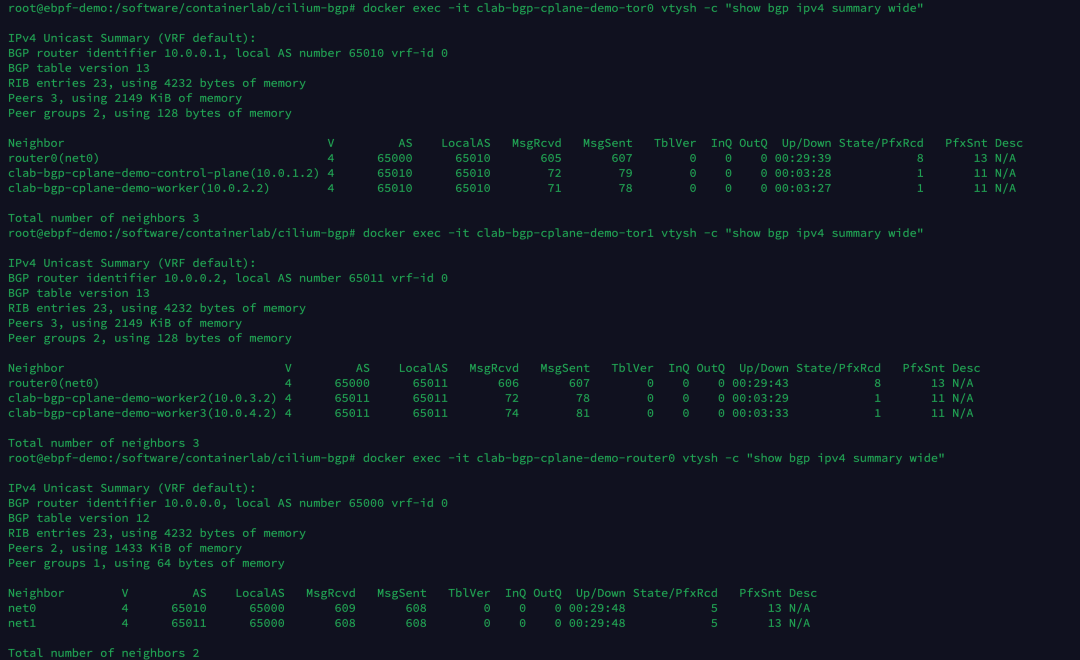 Execute the following command to view the BGP routing entries now learned by the router0 device.

There are currently a total of 12 route entries, of which 4 extra routes are learned from the 4 Kubernetes Nodes on the 10.1.x.0/24 network segment.

Create 1 Pod on the node where rack0 and rack1 are located to test the connectivity of the network.

View the IP address of the Pod.

Execute the following command to try pinging nettool-2 Pod in the nettool-1 Pod.

Next, use the traceroute command to observe the direction of the network packets.

The packets are sent from the nettool-1 Pod and go through the following in order. 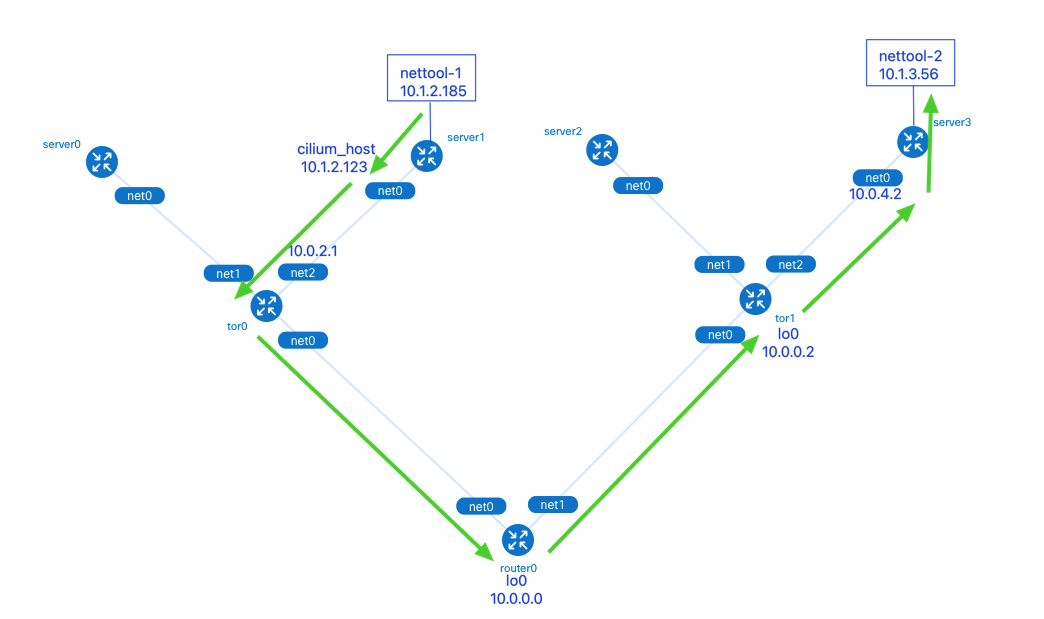 8 Clean up the environment

Execute the following command to clean up the experimental environment created by Containerlab and Kind.