Explore the memory structure of a computer species and how the CPU reads and writes data in memory and how to maintain data consistency in the CPU cache. What is virtual memory and the need for it to exist.

Currently, SRAM is mainly integrated in CPUs, and each CPU core has its own L1 cache, which is usually divided into instruction cache and data cache to store instructions and data used by the CPU separately, while the L2 cache is also available in each CPU core, but it is often not inside the CPU core. Therefore, L2 cache access speed is slightly slower than L1. The L3 cache, on the other hand, is usually shared by multiple CPU cores.

In DRAM, the memory cell uses a capacitor to hold the charge to store the data. The capacitor is constantly leaking, so it needs to be refreshed and charged regularly to keep the data from being lost. Since DRAM requires only one transistor to store one bit, the data stored is much larger.

Let’s look at some of their speeds. 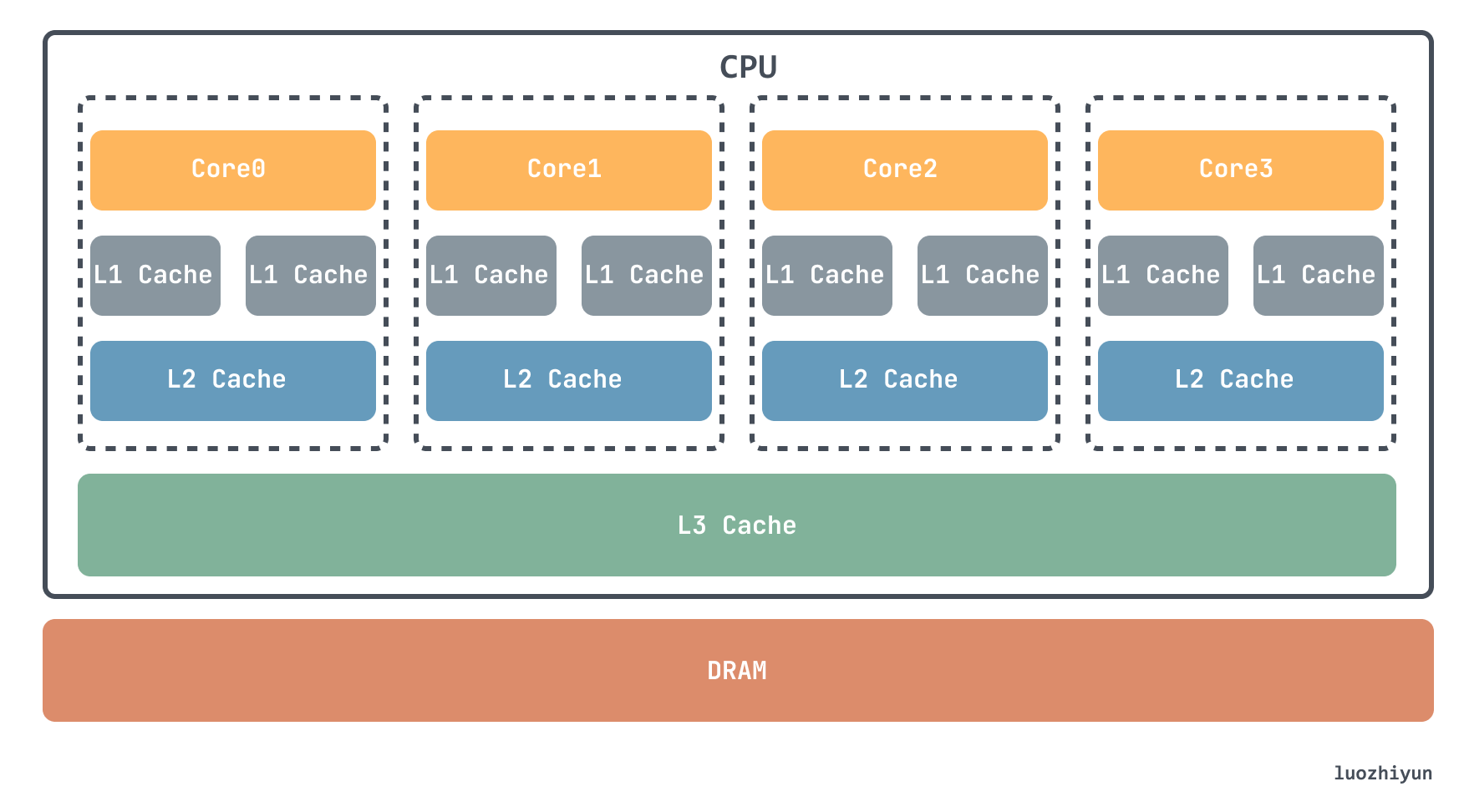 As we said above, for the CPU, SRAM is called the CPU cache. The CPU accesses the cache every time it fetches data, and loads the data into the cache if it cannot fetch it. Since the size of the cache is much smaller than the main memory, it is also necessary to maintain a mapping relationship between the cache and the main memory so that the data can be found correctly.

One simple way is direct mapping, which is like finding data and putting it directly into a map for storage, where the mapping is modulo the number of addresses and cache to get the address of the main memory in the cache to get the data.

The above diagram shows an address going to the cache. For cache, it can be divided as follows.

For example, if the cache has 1024 words, i.e., 4KB, and there is a 32-bit address to find data in the cache, then the 10 bits of the address will be modulo to find the corresponding cache row, and then the 20 bits will be compared with the cahce marker bits, and if they are equal and the valid bits are on, then the corresponding request address is hit in the cache. Otherwise, a miss occurs.

Since the CPU is not reading a whole block of data, but a fragment of data that it needs, the cache will index the corresponding word according to the offset of the lower two bits after the hit.

Group concatenation is the use of group index instead of the original index, the following figure indicates that there are 2 rows of data in each group, find the corresponding data rows by group index and then search for each row in the group by valid bits and tags, if it matches, it means it is a hit.

Let’s look at read operations first. cache is empty in its initial state, and reading data at this time will result in a cache miss. cache controller will detect the miss and retrieve the required data from the main memory (or a lower level cache). If it hits, then it will be used directly.

Let’s look at write operations. Since the cache is composed of multiple levels, there are generally two write policies: write-through and write-back. These two policies are used to keep the data written in the cache the same as the data in the main memory.

However, if the write speed is faster than the buffer release speed, it will still block the CPU execution. Then consider the write back strategy, which writes only the new value to the cache on each write, and writes to a lower-level storage structure only when the modified block is replaced.

Consistency and the MESI protocol

Since there are multi-core CPUs with multiple levels of cache and data sharing, a mechanism is needed to ensure that the cache data seen in different cores must be consistent. The most commonly used protocol to handle cache coherency between multi-core CPUs is the MESI protocol.

The MESI protocol is a protocol called Write Invalidate. In the write invalidate protocol, only one CPU core is responsible for writing data, and the other cores are only synchronized to read the write. After this CPU core writes to the cache, it broadcasts a “fail” request to all other CPU cores.

The MESI protocol corresponds to four different tokens, which are listed below.

Modified" and “Invalidated” are easy to understand, so let’s take a look at the “Exclusive” and “Shared” states.

In our daily Linux or Windows operating systems, programs do not have direct access to physical memory. Programs have to translate the virtual address (VA) into a PA physical address using address translation to get the data. This means that the CPU is actually operating on a virtual address VA.

As shown above, when the CPU accesses the main memory, a virtual address is translated by the Memory Management Unit (MMU) into a physical address (PA) in order to access it.

The most intuitive way to map a virtual address to a physical address is to create a mapping table. This mapping table is called a Page Table in computer. 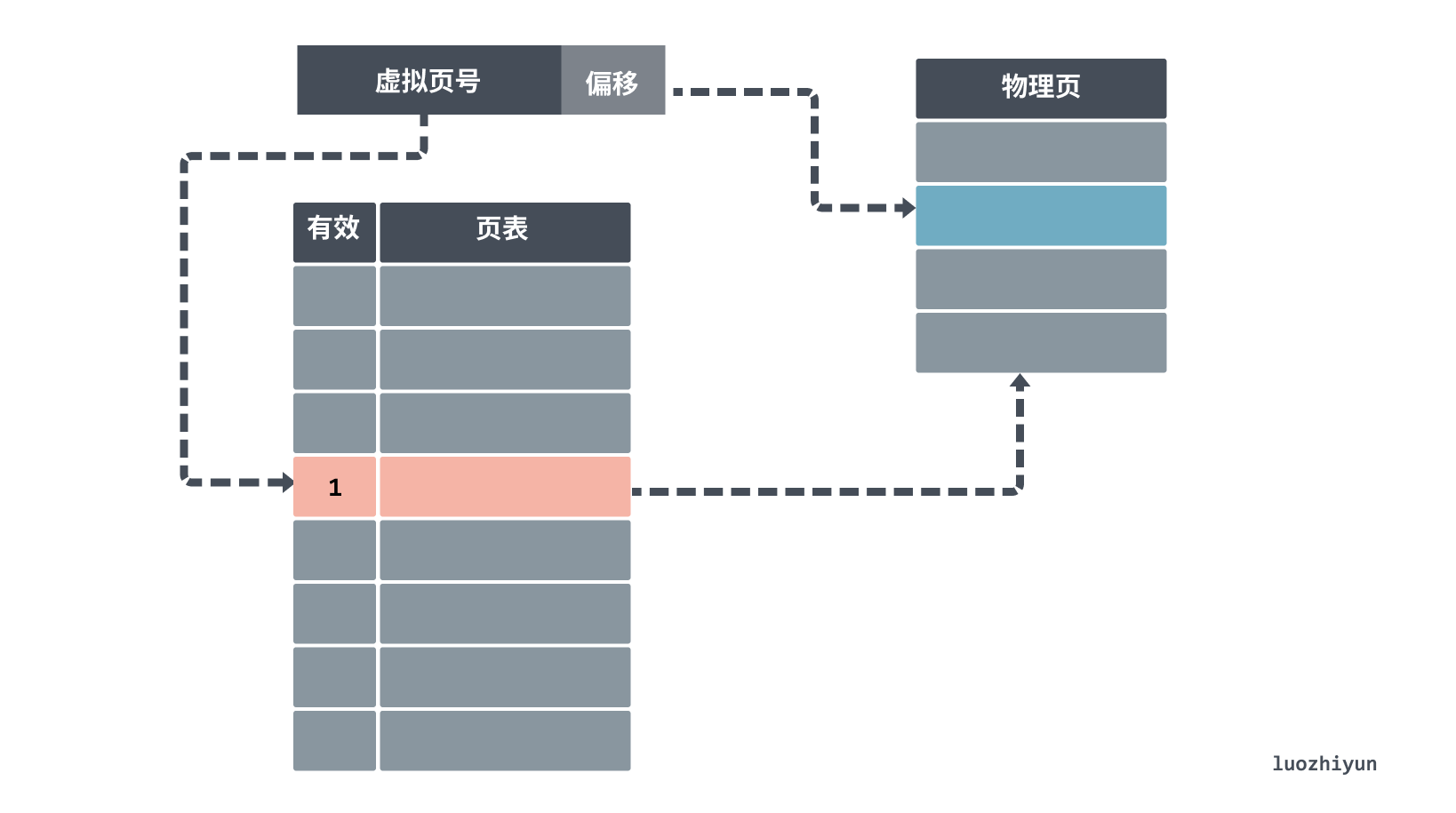 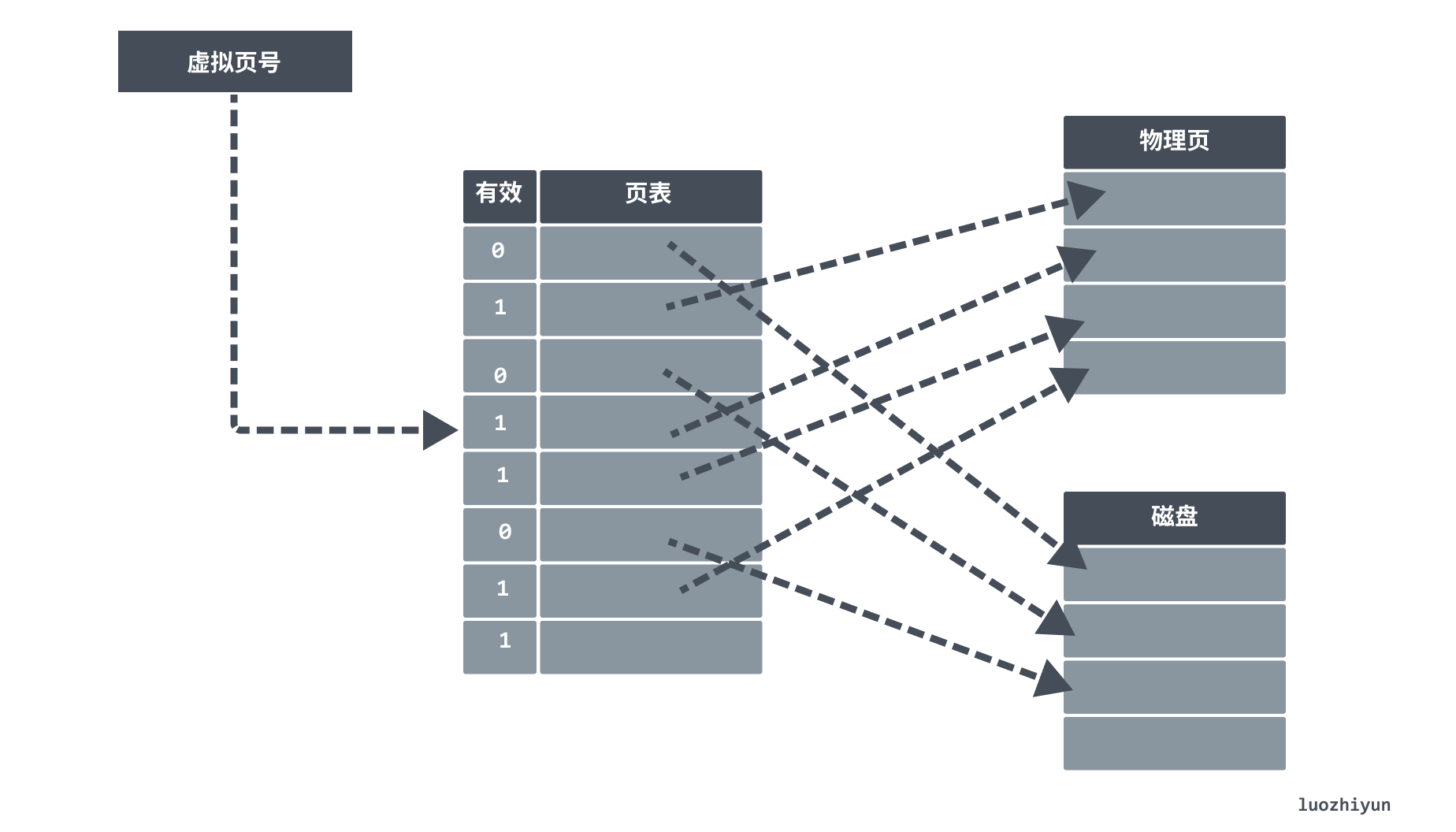 If the valid bit is off, then the page exists only at a specified disk address on the disk. A missing page triggers a missing page exception, and then the page is found in flash memory or on disk and placed into the main memory DRAM.

In the following figure assume that the VP6 stored in main memory is selected for replacement, replacing VP6 with VP3. If the replaced VP6 has already been modified, then the kernel copies it back to disk.

Due to locality, programs generally work on a small set of active pages, and the page switching overhead exists only when the program is dispatched into memory at startup, with page hits for the rest of the program. However, if the working set of code is too large and exceeds the physical memory size, then the pages will keep swapping in and out, generating jitter.

Suppose we now have a 32-bit address space, 4KB pages and a 4-byte PTE, then we need a 4MB page table resident in memory, and this page table is exclusive to each process, so it will cause a big memory waste, we need a way to optimize our page table space storage.

Think about the virtual memory space structure, the entire 4 GB space, the operating system uses 1 GB, from address 0XC0000000 to 0XFFFFFFFF, the remaining 3 GB left for user space, in fact, many programs do not use such a large space, for 64-bit systems, each process will have 256 TiB of memory space, that will be even less used. 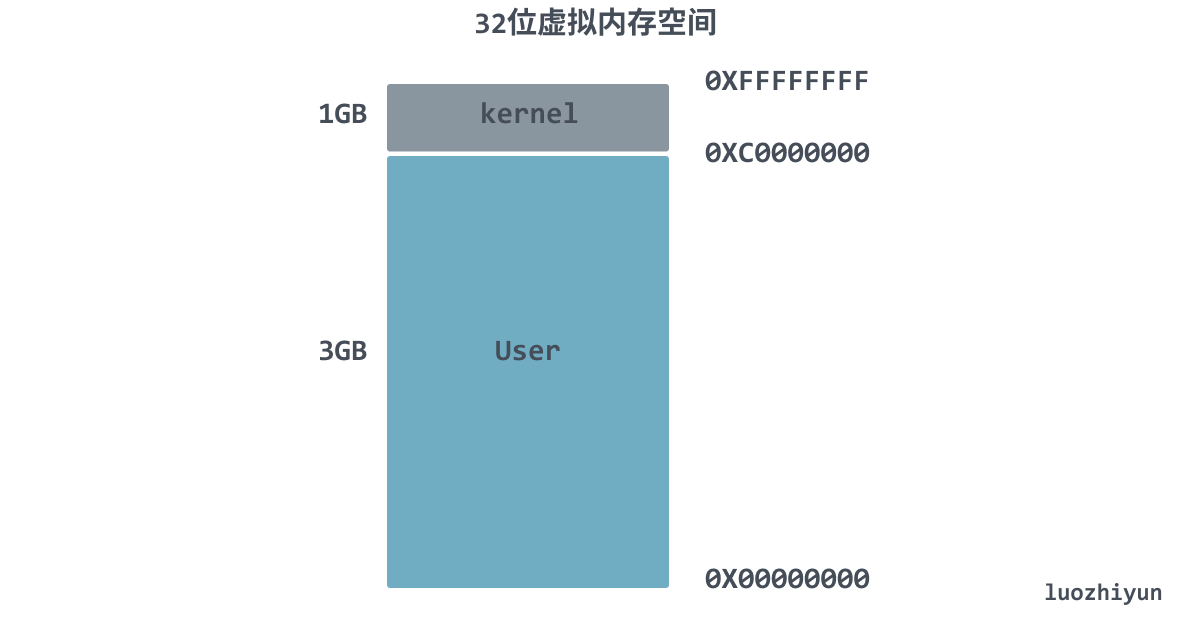 When the program is running, the memory addresses are allocated from the top down, constantly occupying the space of the stack. The heap, on the other hand, has memory addresses from the bottom to the top, which are constantly allocated and occupied. So, inside an actual program process, the address space occupied by virtual memory is usually two contiguous segments. The multi-level page table is particularly suitable for such a memory address distribution.

As shown in the figure below, the first 2K pages of memory are given to code and data, the next 6K pages are unallocated, in the next 1023 pages are also unallocated, and the next one page is allocated to the user stack. 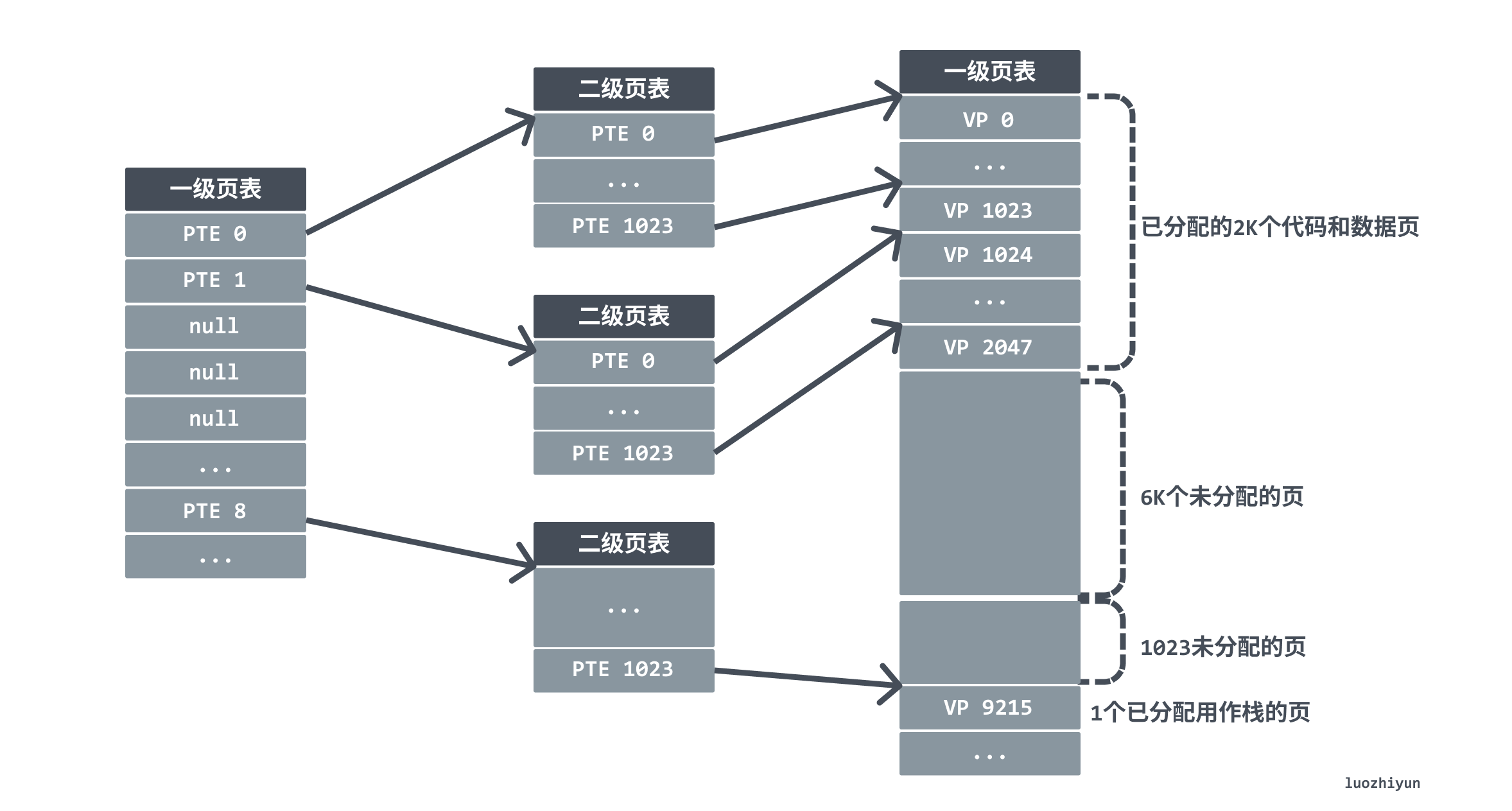 For a page hit data fetch process typically, without TLB acceleration it would look like this.

A simple data fetch requires multiple interactions with memory, and if it is a 4-level page table, then it requires 4 accesses to memory to get the corresponding physical page number. In the case of missing pages, there is also a PTE swap or load process. As mentioned at the beginning, the performance of accessing memory is actually very low, and in fact it seriously affects CPU processing performance.

The instructions that the program needs to use are stored sequentially in the virtual memory. The instructions we execute are also executed sequentially one by one. In other words, there is “spatial locality” and “temporal locality” for accessing instruction addresses, as described in the previous sections, and the data to be accessed is the same. We have executed 5 instructions in a row. Since the memory addresses are contiguous, we can cache the addresses of the previous memory translations by adding a cache to reduce the interaction with memory.

The added layer is the cache chip TLB (Translation Lookaside Buffer), which holds a block consisting of a single PTE per line.

The process of querying data then becomes. 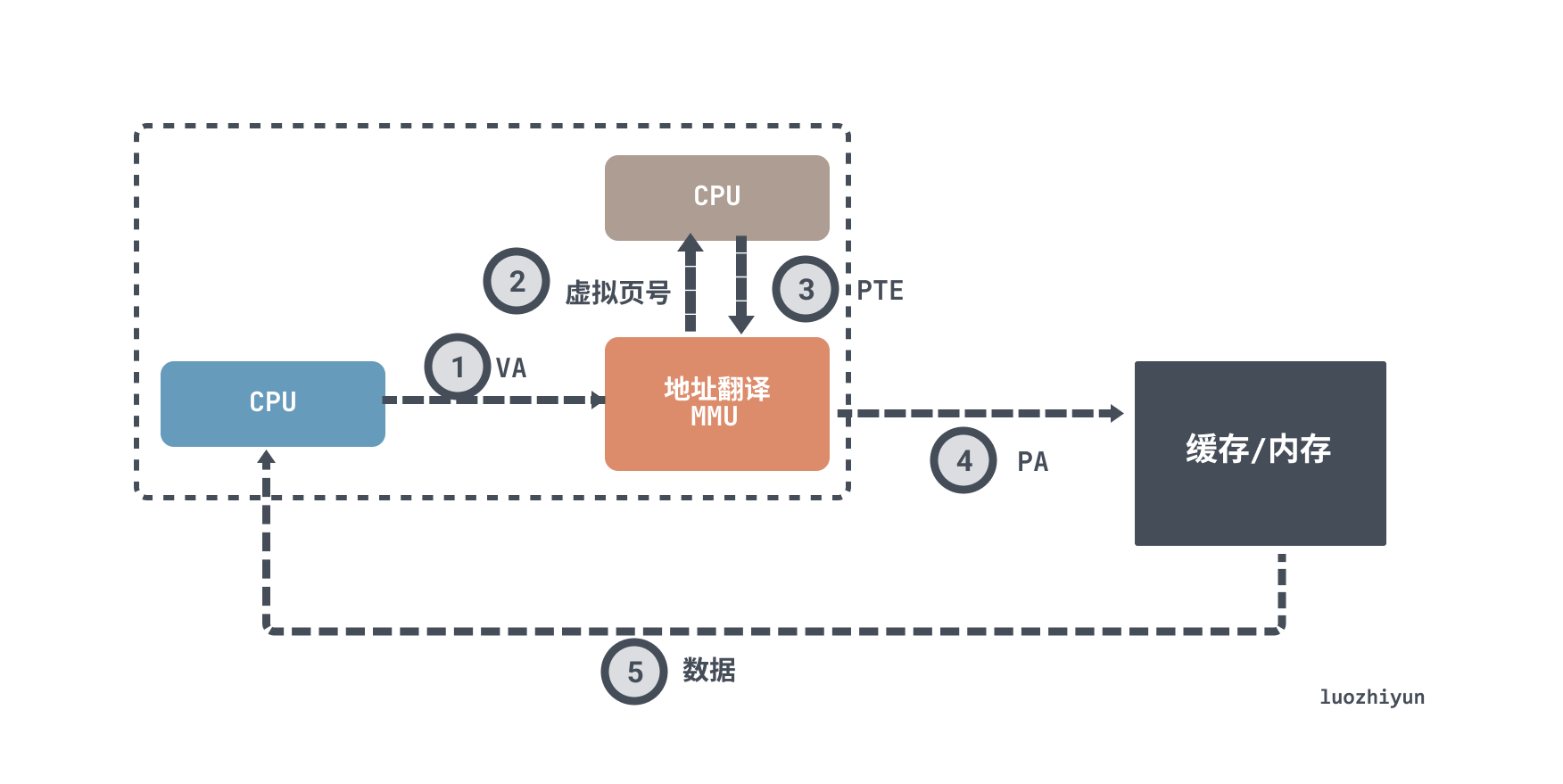 Finally, let’s look at why virtual memory is needed

Since operating virtual memory is actually operating a page table, we know from the above explanation that the size of the page table actually has nothing to do with physical memory, and that when physical memory is not enough, you can use page misses to replace the needed data into memory, which only needs to hold the active part of the many programs, and does not need to load the whole program into memory, which allows machines with small memory to run programs.

Virtual memory can provide separate memory space for running processes, creating the illusion that each process’ memory is separate. Virtual memory space is simply a logical structure in the operating system that translates virtual addresses through a multi-layered page table structure that allows multiple processes to share physical memory through virtual memory.

Then there is the provision of memory protection mechanisms. Any modern computer system must provide the operating system with the means to control access to the memory system. Pages in the page table in virtual memory hold read permissions, write permissions, and execute permissions. The memory management unit can determine whether the current process has permission to access the physical memory of the target, so that we end up converging all the functions of permission management into the virtual memory system, reducing the number of code paths that could be at risk.

From the above we can know that the CPU cache structure generally consists of L1, L2, and L3 cache structure. The CPU reads data only interacts with the cache and does not directly access the main memory, so a set of mapping relationships is maintained between the CPU cache and the main memory. When the data being looked up is missing, it needs to wait for the data to be loaded from main memory to the cache, and if the cache is full, then it also needs to be eliminated. If the eliminated data is dirty, then it needs to be written back to the main memory. The write strategies are write-through and write-back.

Since the CPUs in today’s computers are multi-core and cached data is shared by multiple cores, there are protocols like MESI to maintain a state machine to ensure that data is consistent across multiple cores.