In the kubernetes API specification defined by the k8s.io/api repository, Pods are used as the most basic resource type. A typical serialized pod object in YAML form is shown below.

From a programming perspective, the serialized pod object is eventually sent to the API-Server and decoded into a Go structure of type Pod, and the fields in the YAML are assigned to that Go structure. So, how is the Pod type defined in a Go structure?

In addition to single objects in the kubernetes API resource objects, there is also the object list type, which is used to describe a list of objects of the same type. The typical application scenario for object lists is enumeration, where an object list can express a set of resource objects. Some people may ask why not use the object slice, such as []Pod , and as the discussion progresses, this will be understood. Here we take PodList as an example for analysis.

Before we start the next section, let’s make a short summary.

Here metav1 is an alias for package k8s.io/apimachinery/pkg/apis/meta/v1, which will be referred to by metav1 for the rest of this article.

metav1.TypeMeta is used to describe the meta information of the kubernetes API resource object type, including the name of the resource type and the schema of the corresponding API. The schema here mainly includes the resource grouping and version information.

This means that any object that inherits metav1.TypeMeta (that is, any kubernetes API resource object) knows how to decode and encode serialized object type information.

metav1.ObjectMeta also implements metav1.Object and metav1. ObjectMetaAccessor, where the metav1.Object interface defines Get and Set methods for obtaining various meta-information about a single resource object.

metav1.ListMeta defines the public properties of all instances of the object list type.

When we introduced metav1.TypeMeta and metav1.ObjectMeta earlier, we found that schema.ObjectKind is the abstraction of all API resource types and metav1.Object is the abstraction of all API single resource object properties, so wouldn’t a type that implements both of these interfaces objects that implement both interfaces can access the public properties of any API object? Yes, for each particular type, such as Pod, Deployment, etc., they do have access to the public properties of the current API object. Is there a unified parent class of all specific types that has both schema.ObjectKind and metav1.Object interfaces so that it can represent any specific type of object. That is what this section will discuss with the runtime.Object interface.

Let’s first look at the definition of the runtime.Object interface.

Why does the runtime.Object interface only have these two methods? Shouldn’t there be a GetObjectMeta() method to get the metav1.Object object? If you look further down, you will see that a different implementation is used, with the Accessor method defined in k8s.io/apimachinery/pkg/api/meta as follows.

Accessor method can convert any type of Golang object to metav1.Object or return an error message, thus avoiding the need to implement the GetObjectMeta() method for each API resource type.

We can get the corresponding field values from each field of the Pod structure, such as the image of the Pod runtime container, etc. However, the actual situation is that a lot of information about Pod objects is unknown at compile time and can only be obtained at runtime. How to deal with this situation? That’s where unstructured objects come in.

As anyone familiar with reflection will quickly recall, the Go language relies on reflection to dynamically fetch fields at runtime, unifying these unknown types as interface{} at compile time. For JSON/YAML-compatible deserialized objects, we can use map[string]interface{} to represent the fields. It follows that a Pod or any other Kubernetes API object that is unknown at compile time can also be represented as a Go structure as follows.

It is on this basis that the data structure of unstructured.Unstructured is defined very similarly.

The various types of objects that implement the runtime.Object interface are strictly type-checked, and can be easily added, deleted, and checked by various clientset API resource objects, It is mainly used for static clients. For example, use static clients with structured objects to create Pod objects.

For the same example, for dynamic clients using the unstructure.Unstructured type, we don’t even need to know how the Pod fields are defined, we just need to convert from YAML/JSON to unstructured.Unstructured objects or simply define map[string] interface{} to represent the Kubernetes API object.

To make it easier to remember, a short summary of the various interfaces and implementations introduced earlier is now available. 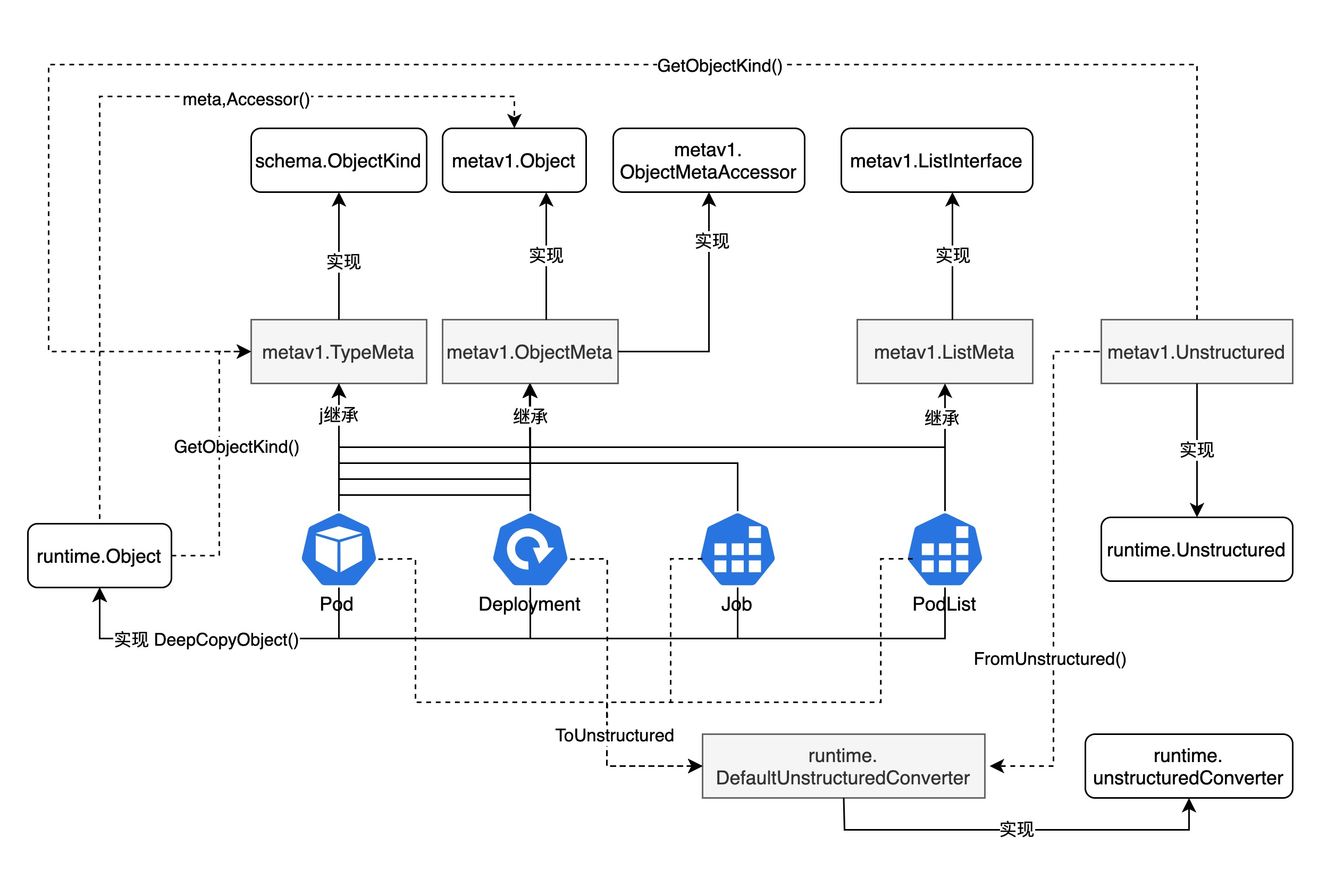