Nginx is an open source software originally designed as a high-performance web server. Today, Nginx can perform a number of other tasks, including caching servers, reverse proxy servers, load balancers, and more.

At present, the mainstream use of web server software, mainly apache, nginx, tomcat, iis, etc., on a global scale, Apache is the most popular existing web server, but the most popular web server in the high-traffic website is indeed nginx, in our country, whether large or small Internet companies, the mainstream choice is also nginx as web server software. A survey from Netcraft found that the usage rate of Apache was 31.54% and the usage rate of Nginx was 26.20%. 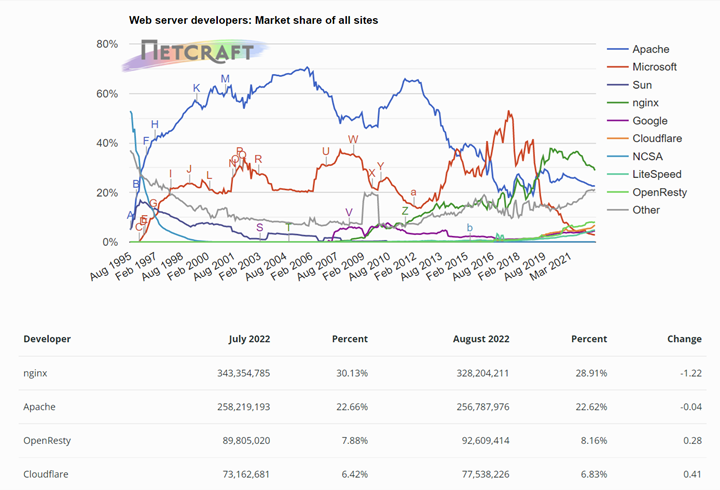 HTTP proxy, there are two types: one of forward proxy and one of reverse proxy.

The most important feature of Forward Proxy is that the client is very clear about the address of the server to be accessed, and it proxies the client and makes the request for the client.

Suppose the client wants to access Google and it knows that the address of the server to be accessed is https://www.google.com/, but due to constraints, it finds a “friend” who can access Google: a proxy server. The client sends the request to the proxy server, which requests Google on its behalf, and eventually returns the response to the client. This is a forward proxy process, in which the server does not know who is actually sending the request.

Then, with the explosive growth of requests, the server feels that it is always unable to cope with it alone and needs help from its brother servers, so it calls for its brothers as well as its proxy server friends. At this point, all requests from different clients are actually sent to the proxy server, which then distributes the requests to each server according to certain rules. 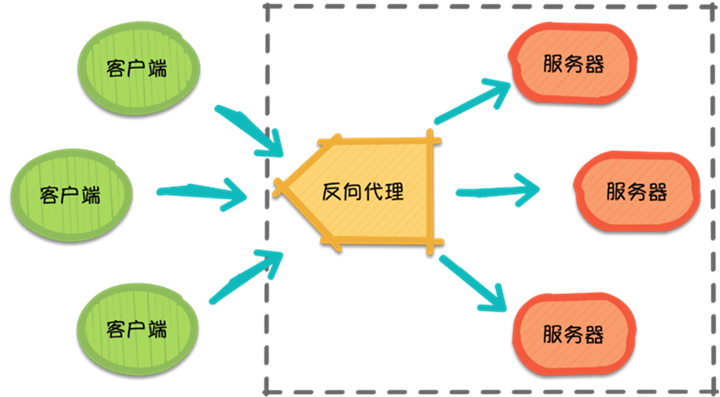 In this, the reverse proxy needs to consider the problem of how to carry out a balanced division of labor, control the traffic and avoid the problem of excessive local node load. In layman’s terms, it is how to reasonably allocate requests for each server, so that it has a higher efficiency and resource utilization as a whole.

Load balancing is also a common feature of Nginx, based on the nginx reverse proxy. Load balancing means spreading the execution across multiple operating units, such as web servers, FTP servers, enterprise critical application servers, and other mission-critical servers, so that they can work together to complete work tasks. Simply put, when there are 2 or more servers, requests are randomly distributed to the designated servers for processing based on rules. Nginx currently supports three load balancing policies (polling, weighted polling, IP hashing) and two common third-party policies (fair, url hashing). 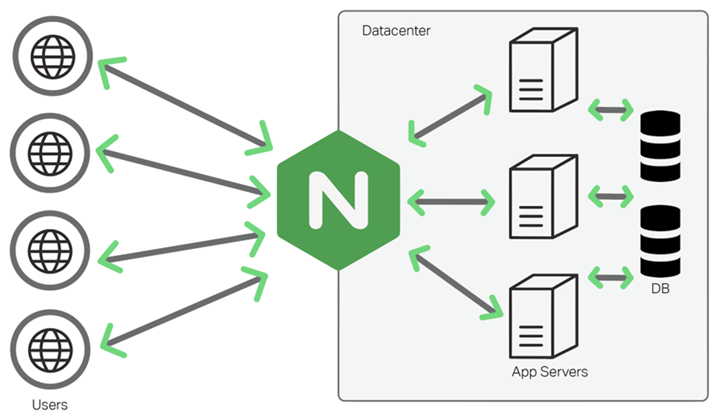 nginx can cache static resource files such as images, css, and js. nginx is used as a caching server together with nginx as a reverse proxy server. When a client first requests a static resource from a back-end resource server via nginx, the response is given to the corresponding client while caching a copy of itself, and subsequent requests for the same resource do not need to be requested from the back-end server again unless the cache is cleared or the cache expires.

Load balancing provides an inexpensive, efficient, and transparent way to extend the bandwidth of network devices and servers on top of the existing network structure, and can increase throughput, enhance network data processing, and improve network flexibility and availability to some extent. In the words of the official website, it acts as a “traffic commander” in the network flow, “standing in front” of the servers and handling all requests between servers and clients, thus maximizing response rates and capacity utilization, while ensuring that no server is No server is overloaded. If a single server fails, the load balancing approach redirects traffic to the remaining clustered servers to ensure service stability. When new servers are added to the server group, they can also be load balanced to start automatically processing requests from clients.

In short, load balancing is actually a strategy to distribute a large number of requests.

Load balancing is to spread the load to be executed on multiple operating units, thus improving the availability and responsiveness of the service and bringing a better experience to the users. For web applications, through load balancing, the work of one server can be extended to be executed in multiple servers, increasing the load capacity of the whole website. The essence of this is load balancing, which uses a scheduler to ensure that all back-end servers bring their performance to full play, thus maintaining the best overall performance of the server cluster. 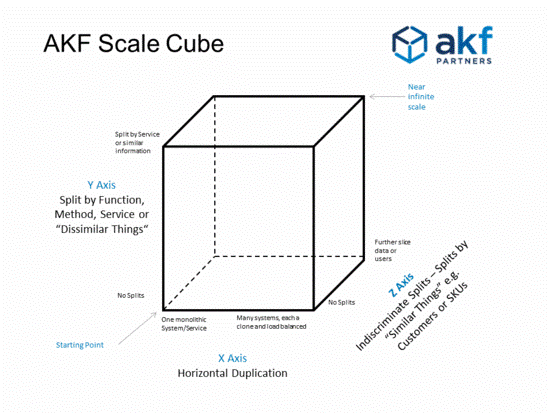 This is the load balancing feature of Nginx, and its main purpose is to enhance the processing power and disaster recovery capabilities of the service.

Nginx is used as a load balancer for several reasons.

Nginx works at Layer 7 of the network, and can do triage policies for HTTP applications themselves. It supports load balancing for seven layers of HTTP and HTTPS protocols. Support for Layer 4 protocols requires a third-party plug-in. -yaoweibin’s ngx_tcp_proxy_module implements TCP upstream.

The main reasons why Nginx is called dynamic load balancing are.

Nginx is an excellent reverse proxy server, and has different load balancing algorithms to solve server resource allocation problems when there are too many requests.

Polling is a more basic and simple algorithm in load balancing, it does not require additional parameters to be configured. Assuming that there are M servers in the configuration file, the algorithm iterates through the list of server nodes and selects one server per round to process requests in node order. After all nodes have been called once, the algorithm starts a new round of traversal from the first node.

Features: Since each request in this algorithm is assigned to a different server one by one in time order, it is suitable for the case of clusters with similar server performance, where each server carries the same load. However, for clusters with different server performance, this algorithm is prone to problems such as unreasonable resource allocation.

To avoid the drawbacks of normal polling, weighted polling was created. In weighted polling, each server has its own weight, and in general, a higher weight means that the server has better performance and can carry more requests. In this algorithm, client requests are assigned in proportion to the weight, and when a request arrives, the server with the highest weight is assigned first.

The Nginx weighted polling source code can be found at: ngx_http_upstream_round_robin.c. The core idea is to iterate through the server nodes and calculate the node weights as the sum of current_weight and its corresponding effective_weight, and select the node with the highest weight as the best server node in each round. The effective_weight changes with the resource and response situation during the execution of the algorithm.

Features: This algorithm solves the problem of Session non-sharing in a cluster deployment environment to a certain extent.

The Session non-sharing problem means that if a user has already logged in and the request is assigned to server A, but server A suddenly goes down, the user’s request will be forwarded to server B. However, because of the Session non-sharing problem, server B cannot share the request with server A. However, because the session is not shared, B cannot read the user’s login information directly to perform other operations.

In practice, we can use ip_hash to forward some of the requests under IP to the server running the new version of the service, and some to the old version of the server to achieve grayscale publishing. Furthermore, if we encounter a request timeout due to a large file size, we can also use ip_hash to slice and upload the file, which ensures that the file slices sent by the same client are forwarded to the same server, facilitating its receipt of the slices and subsequent file merging operations.

fair relies on Nginx Plus, with a limited allocation to the server with the shortest response time.

When we need to proxy a cluster, we can do so in the following way.

The status of the server in load balancing scheduling.