Through some of the previous notes, we have a basic understanding of how various container network models are implemented. However, what really pushes container technology to the climax is the Kubernetes container orchestration platform. Kubernetes forms clusters by integrating massive container instances, which may run in heterogeneous underlying network environments, and how to ensure the interoperability between these containers is one of the primary considerations in real production environments.

Kubernetes does more abstraction of container technology, one of the most important points is to propose the concept of pod, which is the basic unit of Kubernetes resource scheduling, we can simply think pod is an extension of container, from a network perspective, a pod must satisfy the following conditions.

Based on such basic requirements, we can know that

In fact, Kubernetes further defines the basic requirements for a qualified cluster network.

That is, the network model must meet all three of these things in order to be used in Kubernetes.

In fact, in the early days of Kubernetes, there were no networking standards, but only the above basic requirements. Based on this underlying network assumption, Kubernetes designed the classic three-tier pod-deployment-service access mechanism. It was not until the 1.1 release that Kubernetes began to adopt the new CNI (Container Network Interface) networking standard.

In fact, when we introduced container networks earlier, we mentioned the CNI network specification, which is less constrained and more open to developers than the CNM (Container Network Model) and does not depend on the container runtime. In fact, the CNI specification is very simple indeed, see here for details. 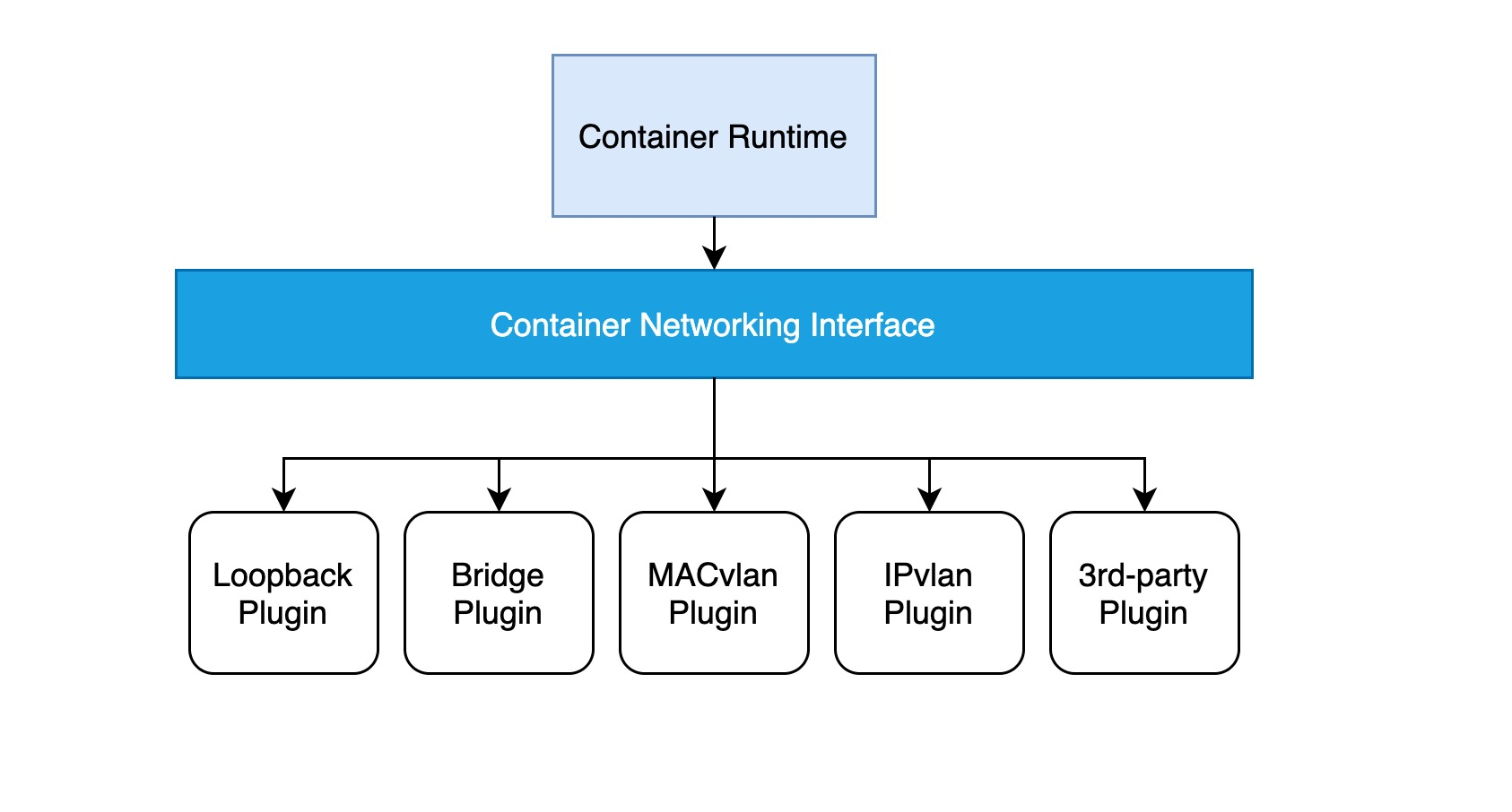 The implementation of a CNI web plug-in requires only a configuration file and an executable file.

The basic workflow of Kubernetes using the CNI network plugin.

If you are not sure what a pause container is and where it is located in a pod, please see “From container to pod”. 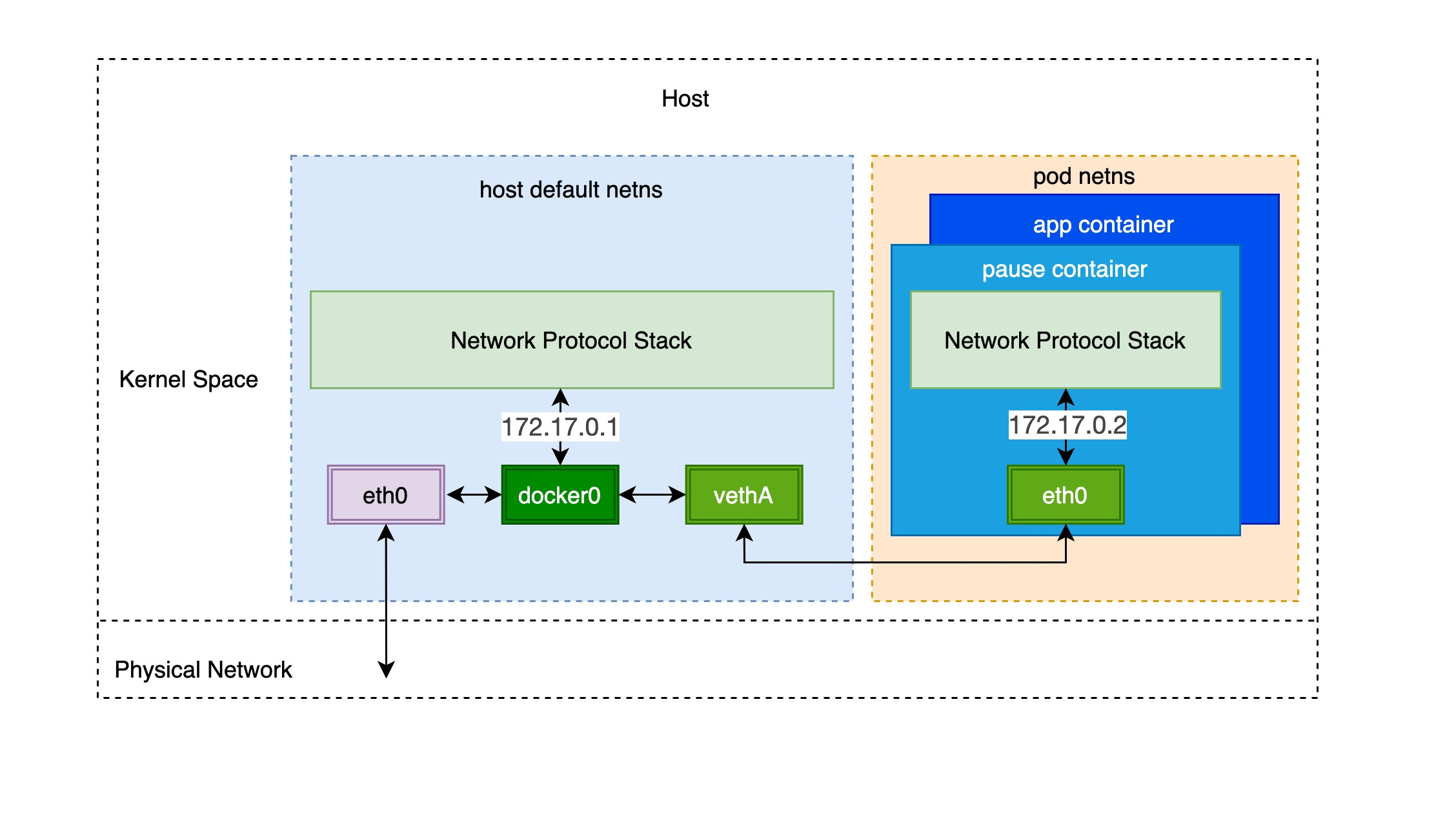 As you can see, other containers inside the same pod share the network namespace created by the pause container, that is, all containers share the same network device, routing table settings, service ports and other information, as if they were different processes running on the same machine, so these containers can communicate with each other directly through localhost + port; for requests from outside the cluster For requests from outside the cluster, the docker0 bridge device acts as a gateway and does address translation via iptables. Here we see that this is actually an extension of the bridge network model for a single container.

In the previous section, we knew that the network model of a single pod is an extension of the container network model, but how do pods communicate with each other? This is actually very similar to inter-container communication, and is divided into two cases: between pods on the same host and between pods across hosts.

As in the container network model. For direct communication between pods on the same host, via the docker0 bridge device on a direct Layer 2 (data link layer) network via MAC address.

And there are two main ideas to communicate between pods across hosts.

The following is a brief description of several mainstream solutions.

Network Policy is a policy-based network control provided by Kubernetes to isolate applications and improve security. It uses the tag selector commonly used in Kubernetes to emulate traditional segmented networks and controls east-west traffic between them and north-south traffic with external communication via policy.

Note: Make sure the network plugin you are using supports Network Policy, for example, Flannel does not implement Network Policy.

The following example is an instance of configuring a typical Network Policy.

It uses the tag selectors namespaceSelector and posSelector to control the traffic between pods. The behavior pattern of the traffic is mainly determined by the following three objects.

Precise control of incoming and outgoing traffic can be achieved by using Network Policy. It uses various selectors to find a set of pods that meet the conditions, or find the equivalent of two ends of communication, and then determines whether they can be connected to each other by characterizing the traffic, which can be understood as a whitelisting mechanism.