The essence of a container is a special process, special in that it creates a NameSpace isolated runtime environment and uses Cgroups to control resource overhead for it.

With these two underlying technologies, we can successfully implement application containerization, but how to make multiple containers in the network environment without interfering with each other can still communicate with each other, so that containers can access the external network, so that the external network can access a specific container and so on. These container network issues also have to take advantage of some Linux network virtualization techniques.

Keeping the network environments of multiple containers from interfering with each other can be a continuation of the previous knowledge point on NameSpace.

Among the 8 types of NameSpace introduced earlier, there is a Network NameSpace, with which we can configure a separate network view for containers.

Let’s look at the Default Network NameSpace where the host is located.

After the previous article, we already know that the essence of the container is the process, and this article will not go into detail. The next operation will go straight through the upper layers to the essence, exploring and restoring the implementation of the container network with the help of the capabilities provided by the underlying Linux layer. (Subsequent processes created in this article, please understand directly as a container)

Create two bash process containers on top of each of these two network namespaces.

As you can see, due to the Network NameSpace isolation, different containers (container1 and container2) have their own independent network stack, including network devices, routing tables, ARP tables, iptables rules, sockets, etc. All containers will think they are running in a separate network environment. 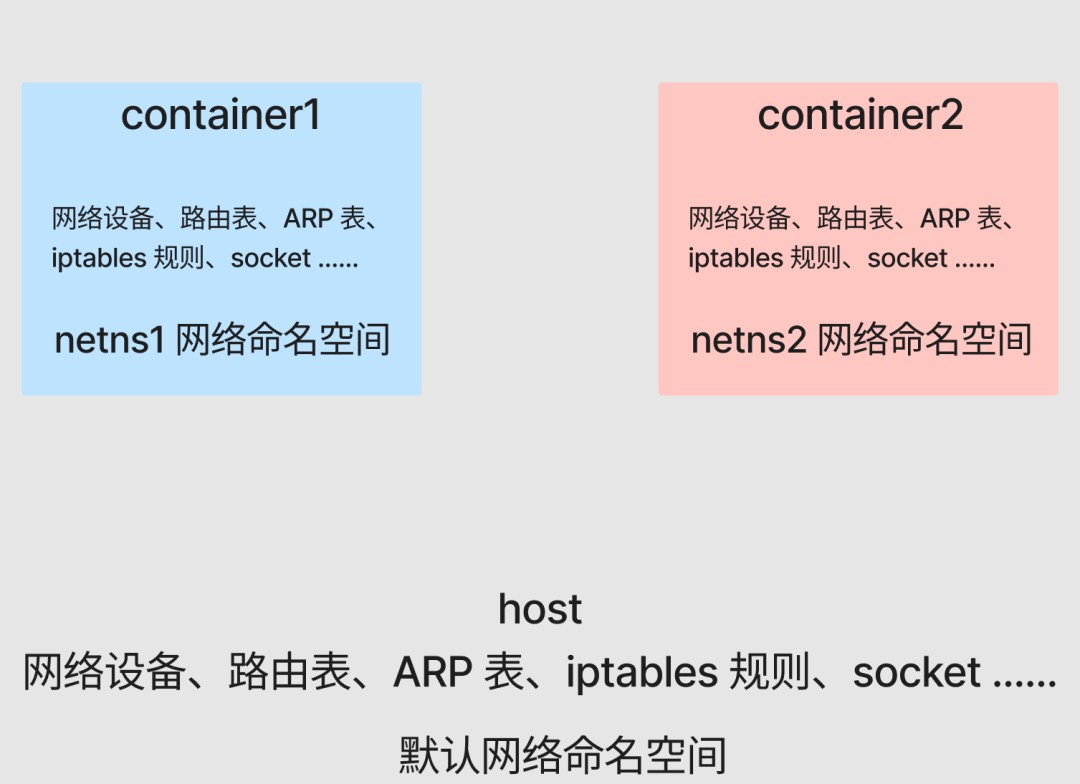 Now prepare a simple go web service and run it in the background of container1 and container2 respectively.

Currently, there is no port conflict between container1 and container2 on the same host, even if they are both listening on port 8080.

Let’s test the availability of the service we just started, using container1 as an example.

The connection fails at this point because we haven’t enabled any network devices at all, including our basic lo loop device. Just enable them directly.

Currently two containers are in different Network NameSpace, their network environment is isolated from each other, you don’t know me and I don’t know you, naturally they can’t communicate with each other over the network.

Before we get into the solution, let’s recall that in the real world, if two computers need to communicate with each other over the network.

We just need to connect the two computers directly with a network cable and that’s it.

So back to the container level, let’s abstract a bit, can containers also have a similar network port can be used to “plug a network cable”?

The answer is of course yes, and Linux network virtualization technology provides us with a way to emulate hardware NICs with software: Veth (Virtual Ethernet devices).

Like a network cable with two ends, Veths come in pairs, so they are also called veth pairs. Assuming that veth1 and veth2 are a pair of devices, packets coming in from veth1 will be received at veth2 and vice versa. So if you put a pair of Veth into two Network Namespaces, the two Network Namespaces will be able to communicate with each other as if they were connected to a network cable.

To start the practice, first look at the list of existing network devices on the host.

Once connected, you can view the corresponding network devices in the container1 and container2 containers.

Set the IP addresses for the two NICs separately so that they are in the same subnet 172.17.0.0/24, and then enable the NICs.

Here, relying only on Veth, we get a peer-to-peer layer 2 network topology and the problem of container peer-to-peer communication is successfully solved.

Communicating with each other between containers: Bridge

We know that in the real world, there can’t be only two computers, and when a third, fourth, or even countless computers join the network environment, we can’t have so many network ports to connect to each other two by two. To solve this problem, the Layer 2 switch (or bridge) was invented. 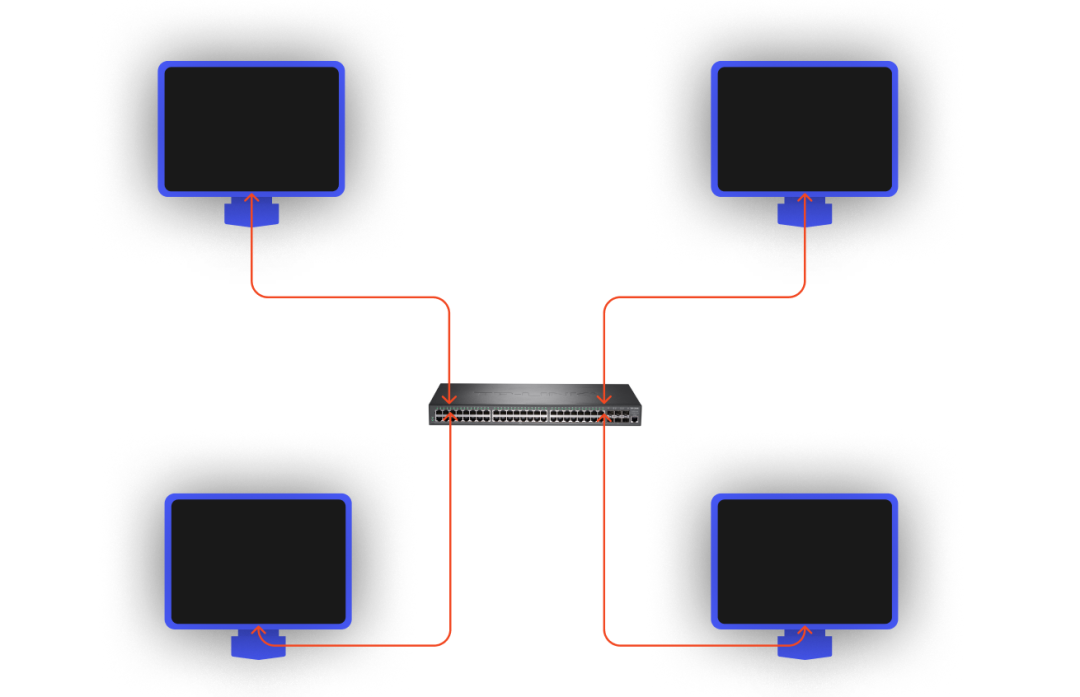 This is also true for containers, if we have 3 or more Namespaces that need access to the same layer 2 network, we can’t simply use Veth alone. However, just like using Veth as a virtual NIC, Linux also provides us with a virtual implementation of a bridge (switch): Bridge.

Create a netns3 namespace on top of the netns1 and netns2 namespaces.

Repeat the previous operation to create the container3 container.

Before we network the three containers to each other, we unplug the “network cables” (veth1 and veth2) that were previously connected between the container1 and container2 containers (only in one of the containers).

Now the three containers won’t know each other.

Back to practice, create a Bridge and enable it.

In each of the three containers, set the IP addresses for the respective NICs in the same subnet 172.17.0.0/24, and enable them as well after setting.

At this point, by introducing the Bridge feature on top of Veth, we have connected multiple Namespaces to the same Layer 2 network, and the problem of inter-container communication has been successfully solved.

So far, our experiments have been in the same subnet. However, real-world application scenarios require more containers to be able to interoperate with the outside.

In the real world, a Layer 2 switch can only address data flow within the same subnet, for different subnets, a Layer 3 router (or gateway) needs to be used for forwarding. 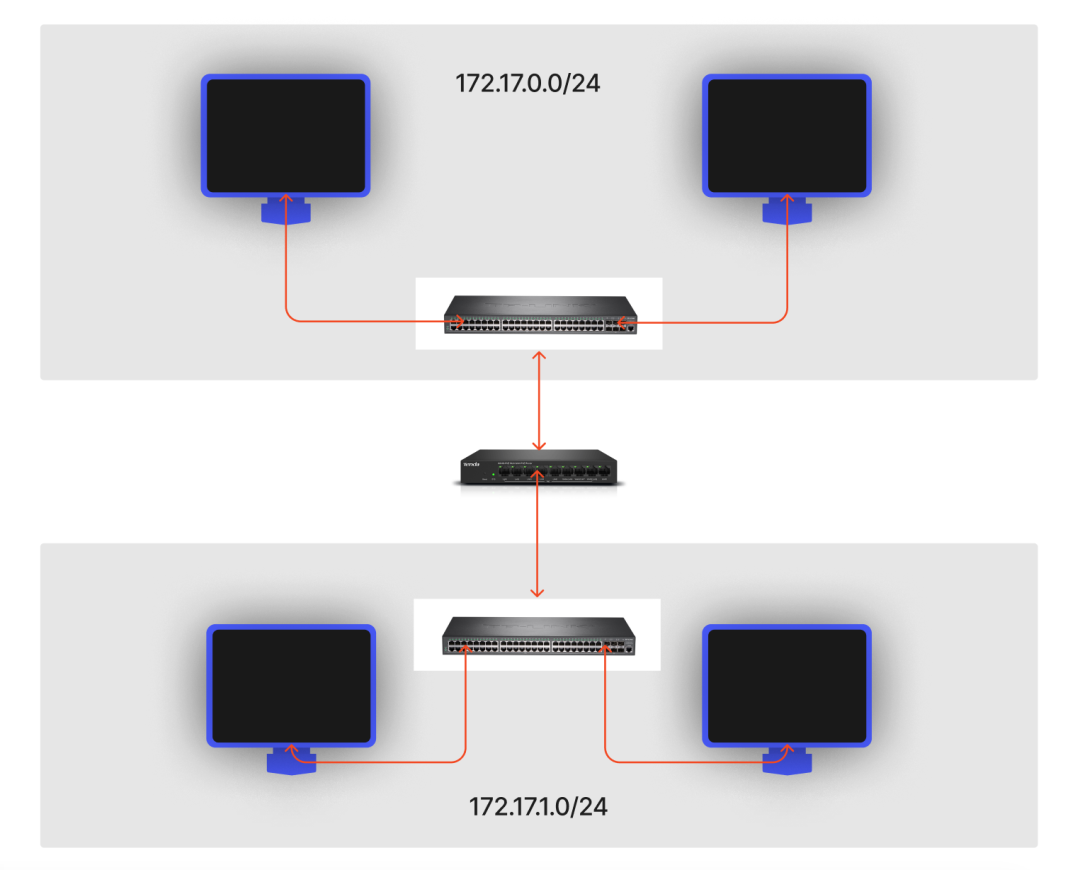 In Linux Network Namespace, the definition of the routing function is actually quite simple: directly by defining routing table rules, you can determine the flow of the requested packets to the specified network device.

Routing rules are defined in the routing table, for the routing table, we most commonly use local and main, of course, can also be configured in addition to other tables, where the local priority is higher than the main, we usually access the local machine (localhost) requests, will be directly in the local table to find the rules, and will not go through the main.

You can see all the routing tables.

To view the rules in the specified routing table you can use the ip route list [table name]:

The route -n command we normally use is actually looking at the main routing table.

Interoperability between containers and hosts

To view the routing rules for a container (container1, for example).

Recall our previous Bridge, from the network point of view, we treat it as a Layer 2 switch, so we don’t need to set IP address for it, but now from the host point of view, br0 is also a NIC in Default Network Namespace, we can directly set IP for this NIC to act as a Layer 3 router ( gateway) to participate in the routing and forwarding of the host.

At this point, the host will automatically add a routing rule with a Destination of 172.17.0.0.

Following this routing rule (packets accessing a destination host of 172.17.0.0/24 are forwarded to the br0 device), we now have direct access to the container from the host.

This way, when the container accesses the host IP, the packet is forwarded directly to the br0 NIC of Default Network Namespace, and the host finds out that the received IP packet belongs to it and processes it.

This means that the container can now access the host as well.

Above we have configured routing rules for the container to access the host IP, the packets will be forwarded to the br0 NIC of Default Network Namespace, and the host will process the received IP packets if they are found to belong to itself.

Pinging host2 inside container1, as well as accessing the extranet, is as we expected, inaccessible.

If we want to be able to access other hosts in the container, or the extranet, we can’t have Linux drop packets that don’t belong to it, but continue to forward them out. To do this, just turn on the IP Forward feature of Linux.

However, there is still a problem here, when the container accesses other hosts or extranets (veth1->br0), Linux also forwards it for us (br0->eth0), but when the other hosts or extranets respond to our container’s request, it does not recognize the 172.17.0.0/24 segment that we configured, and still cannot successfully process the request. So we also need to use NAT (Network Address Translation) technology: convert the IP address and port in the IP data message header to another IP address and port.

What we need to change here is the source IP address, so it is SNAT (Source NAT), which converts the IP to the IP of the host’s egress NIC.

In Linux, we can implement this SNAT through the MASQUERADE policy in iptables.

At this point, our container will be able to access other hosts (external network).

In Docker, to make the container services accessible externally, we do a container port mapping, e.g.

With the -p parameter, we can map the 8080 port inside the container to the 8000 port of the host, so that the outside world can access our container service by accessing the host IP + 8000 port.

This implementation actually uses the same NAT technology, but unlike the SNAT above, here we need to modify the destination IP address, i.e. DNAT (Destination NAT), to forward the traffic requests from the 8000 port on the host to the container address 172.17.0.101:8080.

In Linux, we can implement this DNAT by using the DNAT policy in iptables.

At this point, we have implemented a topology that is the same as the Docker default network model. 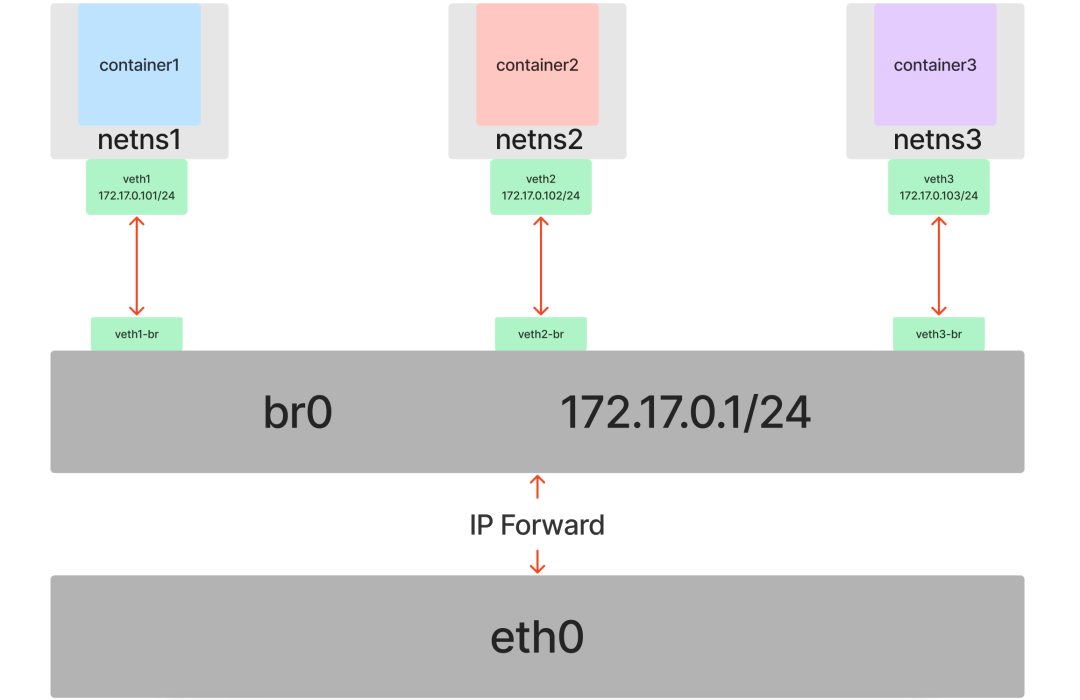 Docker container network technology is the above Veth+Bridge+route+iptables, but is replaced by Go language to achieve these configurations.

Only when we understand these underlying technologies, we can be more comfortable in dealing with container networking problems.

This article only introduces the default network model of Docker itself, while the CNI container network interface of CNCF (the network model of Kubernetes), Service Mesh + CNI hierarchical SDN will become more and more complex.