Docker announced the first technical preview of its integration with WebAssembly (Docker+Wasm) and said the company has joined the Bytecode Alliance as a voting member.

The Bytecode Alliance, founded by Mozilla, Fastly, Intel and Red Hat, is an organization that promotes WebAssembly standardization and aims to improve the WebAssembly ecosystem beyond the browser by collaboratively implementing standards and proposing new ones. It is currently actively promoting WASI (WebAssembly System Interface) to enable WebAssembly to securely access system resources such as files, networks, and memory.

Docker+Wasm makes it easier for developers to quickly build applications for the Wasm runtime, the announcement reads. The diagram below shows how Docker integrates with WebAssembly. 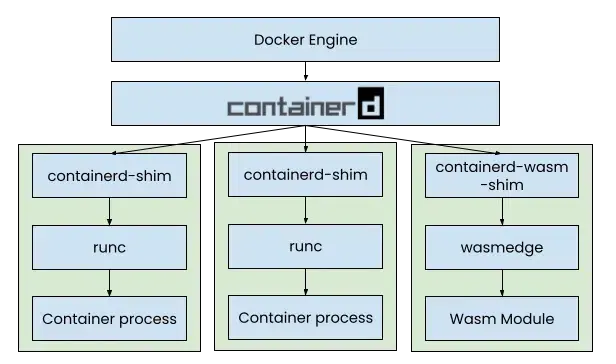 Docker didn’t give any more details, but WasmEdge promises to deliver better boot times than Linux containers, and WasmEdge applications are significantly smaller and faster.

Michael Irwin, co-founder of Docker, wrote, “We see Wasm as a complementary technology to Linux containers, and developers can choose the technology option that works best for their situation (or both). As the community explores Wasm, we hope developers can use familiar and favorite experiences and tools to help make Wasm applications easier to develop, build, and run.”

The sample Wasm application can be launched using the following command.

How to get it

It is important to note that since Docker+Wasm is still in the early technology preview phase, it is not recommended for use in production environments because of the possibility of changes or even removal from future releases.