I have recently studied go mod and have compiled it into an article. This article is a systematic look at go mod, not a simple introduction to how to use it.

Before go mod came out, the community used a model similar to NodeJS, vendor, which meant that all packages were stored in the vendor directory, but this approach was obviously not elegant enough, and then came go mod, which has become the standard for module management in the Go community until today.

The three above, linked together with -.

Maybe we have a program that comes up 2.0, 3.0, 4.0, so what is the solution that Go offers? The answer is to create a subdirectory, e.g. for v2 versions, create a v2 subdirectory, for v3 create a v3 subdirectory. Or, if it’s at the top level, add a v2 or v3 suffix to the end of the path declared in go.mod.

To be honest, it’s not very elegant. His decision was largely based on the guideline that

This means that code within the same major version number must be compatible.

One of the problems with Go is that, for example, when upgrading from v2 to v3, there may be some incompatibilities, but most of the code is still compatible and not completely rewritten. When you do this, the caller was importing github.com/x/aaa, but now you have to import github.com/x/aaa/v2, and all the references to it have to be changed. In addition, the aaa.XXXStruct in v2 and the aaa.XXXStruct in v1 are incompatible and cannot be assigned to each other, which causes the caller to change a lot of things and creates a lot of work.

As we said above, where there is a go.mod file, there is a module, so let’s look at the format of go.mod, starting with an example.

All the paths in there are in the format of a URL with a space and a version number, e.g. example.com/new/thing/v2 v2.3.4.

How does go mod do version selection? In a nutshell: start with the current project main, build a dependency tree, and when multiple submodules depend on the same module, choose the latest one. 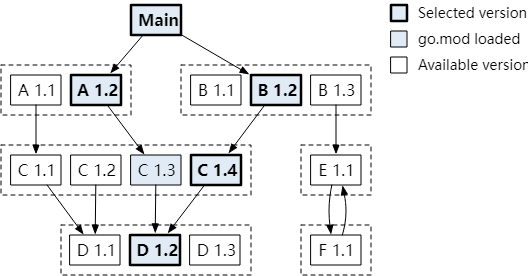 There are times when we want to give a version to a subdirectory, so how do we do that? The answer is to just prefix the version number with the path to the directory, e.g.

Then we run git tag A/B/v0.1.2 and that’s it. This way the user will give preference to the version of the subdirectory over the version number of the root directory when using the package.

Let’s look at common commands that have something to do with version control.