Python, as an interpreted language, is known for its clean and easy to understand code. We can assign values to names directly, without having to declare types. The Python interpreter determines name types and allocates and frees memory space at runtime, and this automatic memory management greatly reduces the burden on the programmer. For a high-level language like Python, developers can complete their work without concern for its internal garbage collection mechanism. Complementary to this, learning Python’s internal garbage collection mechanism and understanding its principles will enable developers to write better code and be more Pythonista.

In Python, memory management involves a private heap (heap) that contains all Python objects and data structures. Management of this private heap is ensured by the internal Python memory manager, which has different components to handle various dynamic storage management aspects such as sharing, partitioning, preallocation, or caching.

At the lowest level, a raw memory allocator ensures that there is enough space in the private heap to store all Python-related data by interacting with the operating system’s memory manager. On top of the raw memory allocator, several object-specific allocators run on the same heap and implement different memory management policies based on the characteristics of each object type. For example, integer objects are managed differently within the heap than strings, tuples, or dictionaries because integers require different storage requirements and speed-versus-space tradeoffs. Thus, the Python memory manager assigns some work to object-specific allocators, but ensures that the latter operate within the confines of the private heap.

Python heap memory management is performed by the interpreter, and users have no control over it, even though they often manipulate object pointers to blocks of memory within the heap, and it is important to understand this. 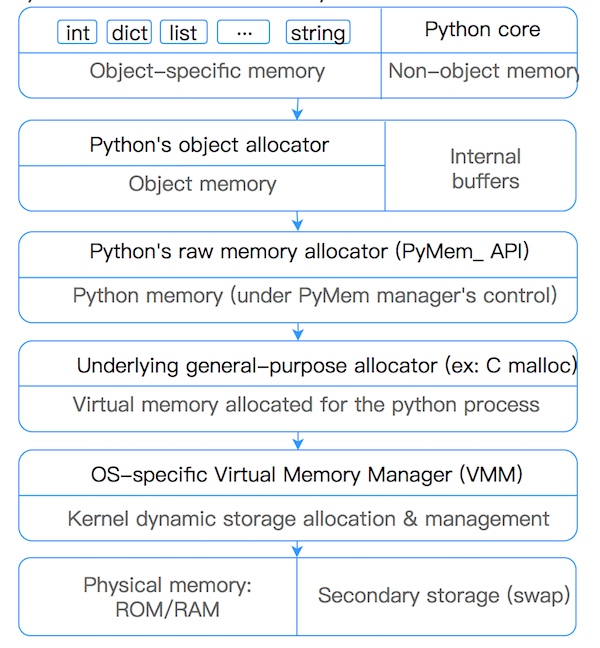 Python’s allocator for small objects is divided into three tiers from large to small: arena, pool, and block.

Block is the smallest level, each block can only contain a fixed size Python Object. size from 8-512bytes, in steps of 8bytes, divided into 64 different types of blocks.

A Pool is a collection of blocks of the same size called a Pool, which is usually 4kb in size, consistent with the size of a virtual memory page. Restricting the size of blocks in a Pool to a fixed size has the following advantages: When an object is destroyed in a block in the current Pool, Pool memory management can put the newly generated object into that block.

Each Pool has three states.

usedpool In order to manage Pools very efficiently, Python uses an additional array, usedpool, to manage them. That is, as shown below, usedpool stores the header pointer to each Pool of a particular size in order, and Pools of the same size are linked in a bidirectional chain. When allocating new memory space to create a Pool of a particular size, simply use usedpools to find the header pointer and iterate through it. When no memory space is available, simply insert a new Pool at the head of the Pool’s bidirectional chain. 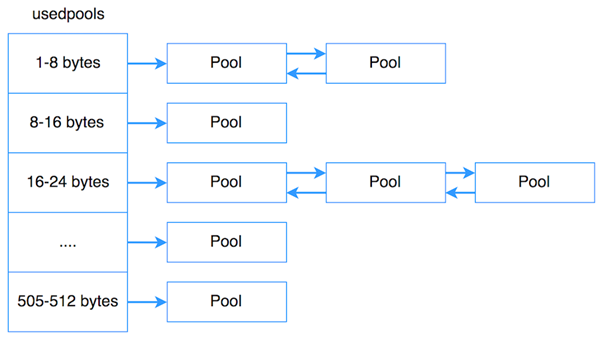 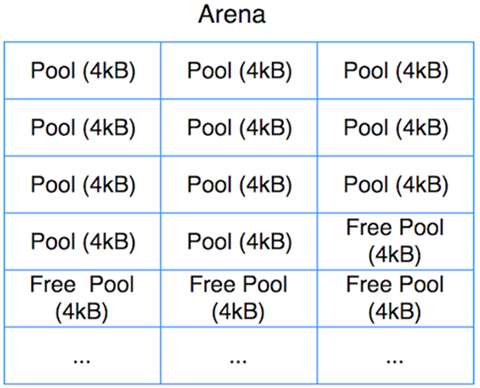 All arenas are also linked using a double-linked table (prevarena, nextarena fields). The nfreepools and ntotalpools store information about the currently available pools. freepools pointers point to the currently available pools. arena structure is simple, the responsibility is to allocate memory to pools on demand, and when an arena is empty, the memory of that arena is returned to the operating system.

The default garbage collection mechanism used by the Python language is “Reference Counting”, an algorithm first proposed by George E. Collins in 1960 and still used by many programming languages today, 50 years later. The principle of reference counting is: each object maintains an ob_ref field, which is used to record the number of times the object is currently referenced, whenever a new reference points to the object, its reference count ob_ref plus 1, whenever the object’s reference fails count ob_ref minus 1, once the object’s reference count is 0, the object is immediately recycled, and the memory space occupied by the object will be released. Its disadvantage is that it requires extra space to maintain the reference count, which is a secondary problem, but the main problem is that it does not solve the object’s “circular reference”, so there are many languages such as Java that do not use this algorithm as a garbage collection mechanism.

Everything in Python is an object, which means that all the variables you use in Python are essentially class objects. In fact, the core of every object is a PyObject structure, which has an internal reference counter, ob_refcnt, that updates the value of ob_refcnt in real time as the program runs, to reflect the number of names that reference the current object. When the reference counter value of an object is 0, it means that the object has become garbage, then it will be recycled and the memory it uses will be freed immediately.

Cases that result in +1 reference count.

which results in a reference count of -1

In addition to the above two objects refer to each other, they can also refer to themselves:

Circular references cause variables to never count to 0, causing reference counting to fail to remove them.

The reference counting method has its obvious advantages, such as efficiency, simple implementation logic, real-time, once an object’s reference count goes to zero, the memory is released directly. There is no need to wait for a specific moment like other mechanisms. By randomly assigning garbage collection to the running phase, the time to deal with reclaiming memory is spread over the usual time, and the normal program runs more smoothly. Reference counting also has some disadvantages.

That is, Python’s garbage collection mechanism is designed in large part to deal with the possibility of circular references, and is complementary to reference counting.

As its name suggests, the algorithm is divided into two steps when performing garbage collection, which are 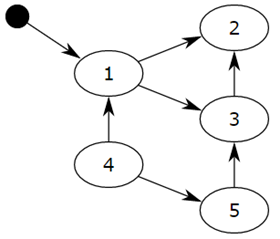 As shown in the figure below, in order to keep track of the container objects, each container object needs to maintain two additional pointers, which are used to form a double-ended chain table of container objects, with the pointers pointing to the front and back container objects for insertion and deletion operations. objects to be scanned, and another chain table that holds temporarily unreachable objects. In the diagram, these two tables are named “Object to Scan” and “Unreachable” respectively. The example in the figure is such a situation: link1,link2,link3 form a reference ring, while link1 is also referenced by a variable A (in fact, here is better called the name A). link4 self-reference, also forms a reference ring. We can also see from the figure, each node in addition to a record of the current reference count variable ref_count and a gc_ref variable, the gc_ref is a copy of ref_count, so the initial value of the size of ref_count.

Then, gc will scan all the container objects again, if the object’s gc_ref value is 0, then the object is marked as GC_TENTATIVELY_UNREACHABLE and moved to the “Unreachable” chain. This is the case for link3 and link4 in the figure below.

In addition to marking all reachable nodes as GC_REACHABLE, if the node is currently in the “Unreachable” chain, you need to move it back to the “Object to Scan” chain, the figure below shows the situation after link3 is moved back.

The garbage collection phase described above suspends the entire application and waits for marker removal to finish before resuming operation.

The advantage of marker removal is that it solves the circular reference problem and has no additional overhead during the execution of the algorithm. The disadvantage is that the normal program will be blocked when executing marker clearing. Another disadvantage is that the marker clearing algorithm generates some small memory fragments in the program’s heap space after many executions.

The generational recycling technique is a garbage collection mechanism developed in the early 1980s and is the core algorithm of Java garbage collection. Generational recycling is based on the statistical fact that for programs, there exists a certain percentage of memory blocks that have a relatively short lifetime; while the remaining memory blocks will have a longer lifetime, even from the beginning of the program until the end of the program. The percentage of objects with a shorter lifetime is usually between 80% and 90%. Therefore, it is simply assumed that: the longer an object exists, the more likely it is not garbage and the less it should be collected. This effectively reduces the number of objects traversed when performing the mark-and-clean algorithm, thus increasing the speed of garbage collection, a space-for-time approach strategy.

So, by what criteria are objects classified? Is it enough to randomly divide an object into a certain generation? The answer is no. In fact, there is a lot to learn about object generation, and a good classification standard can significantly improve the efficiency of garbage collection. 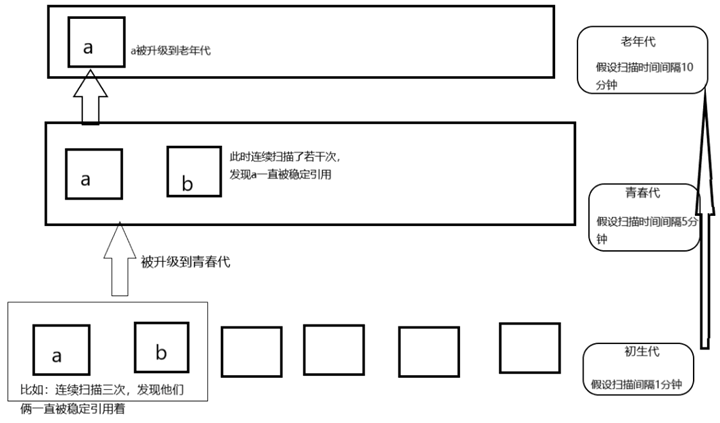 Python internally divides objects into 3 generations, each maintained by a gc_generation structure (defined in Include/internal/mem.h), based on how long the object has been alive.

Each gc_generation structure points to itself at the head node of the chain, in other words each collectible object chain starts out empty, the counter field count is initialized to 0, and the threshold field has its own policy. How are these policies understood? 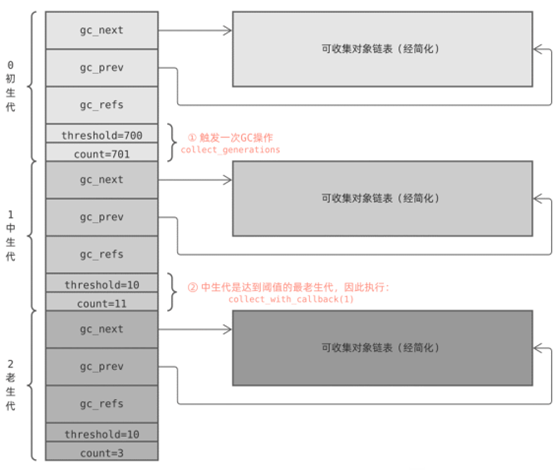 collection_with_callback(1) ends up calling collect(1), which first adds one to the counter of the next generation; then resets the counters of this generation and all previous young generations to zero; and finally calls gc_list_merge to merge the chain of recyclable objects together. 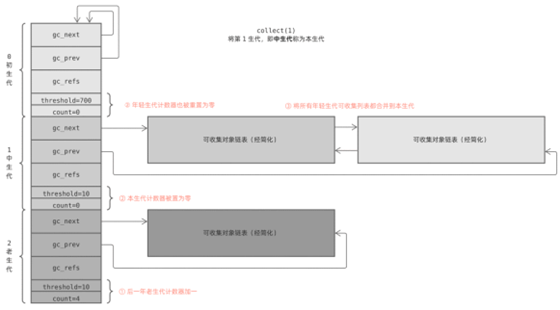 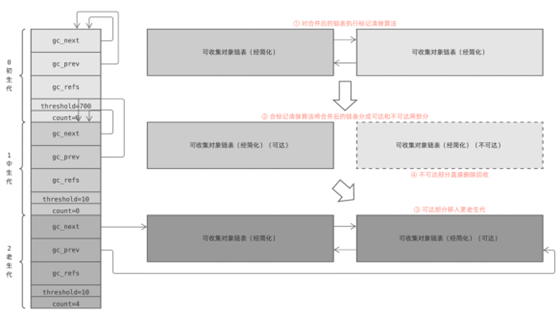 This is the whole secret of the generational recovery mechanism, which seems complicated, but with a little summary you can get a few straightforward strategies.

The gc module in Python

Some Python systems will turn off automatic garbage collection, and the program will judge the timing of the collection itself. It is said that instagram’s system does this, and the overall running efficiency is increased by 10%.