The English word for rate limit is “rate limit”, and the definition in Wikipedia is relatively simple. We write programs that can be called externally, web applications accessed by browser or other means of HTTP, the frequency of access to the interface may be very fast, if we do not limit the frequency of access to the interface may lead to the server can not withstand the high pressure of hanging, which may also generate data loss. The flow-limiting algorithm helps us to control how often each interface or program function is called, which is a bit like a fuse to prevent the system from crashing due to exceeding the access frequency or concurrency.

We may see a response header like this when we call some third-party interfaces.

There are many options for implementing flow restriction.

It is mainly an additional concept of time window compared to counting limit. The counter is reset after every time window.

The rules are as follows.

It seems to be perfect, but in fact there is a flaw. 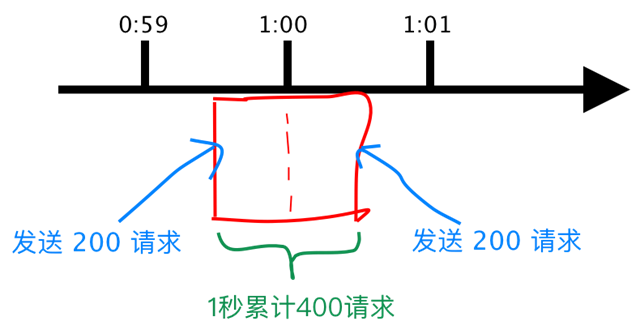 The QPS flow limiting algorithm limits the flow by limiting the number of requests allowed to pass per unit time.

To solve this problem, sliding window flow limiting was introduced.

Sliding window to limit the flow

Sliding window is a technique for controlling the flow of traffic, a term that appears in the TCP protocol. A sliding window divides a fixed time slice and moves it as time passes, with a fixed number of movable cells that are counted and thresholded.

In the figure above we use the red dotted line to represent a time window (one minute), each time window has 6 cells, each cell is 10 seconds. Every 10 seconds the time window moves one frame to the right, see the direction of the red arrow. We set an independent counter Counter for each grid, if a request is accessed at 0:45 then we will be the fifth grid counter +1 (that is, 0:40 ~ 0:50), in the judgment of the flow limit when you need to add up the count of all the grid and set the frequency to compare.

How does the sliding window solve the problem we encountered above?

When the user sends 200 requests at 0:59 seconds, the counter of the sixth grid will be recorded +200, when the next second the time window moves to the right, the counter has already recorded the 200 requests sent by the user, so if it sends again, it will trigger the flow restriction, then reject the new requests.

In fact, the counter is a sliding window, but there is only one grid, so you want to limit the flow to do more accurate just divide more grids, in order to be more accurate we do not know how many grids should be set, the number of grids affects the accuracy of the sliding window algorithm, there is still the concept of time slice, can not fundamentally solve the critical point problem. 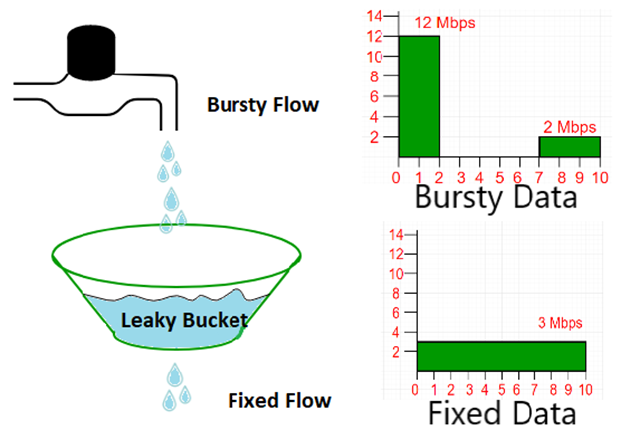 However, the bucket algorithm has some drawbacks, because water flows out from the bottom of the bucket at a fixed rate, and when there are transient burst requests within the server’s tolerance range, these requests will be put into the bucket first and then processed at an even rate, which will cause some requests to be delayed. So he can’t handle burst requests that are within the flow-limiting threshold. But if we get serious, I don’t think this drawback is valid. After all, the leaky bucket is supposed to smooth the traffic, if it supports bursts, then the output traffic is not smooth instead. If we are looking for a flow-limiting algorithm that can support bursty traffic, then the token bucket algorithm can meet the demand. 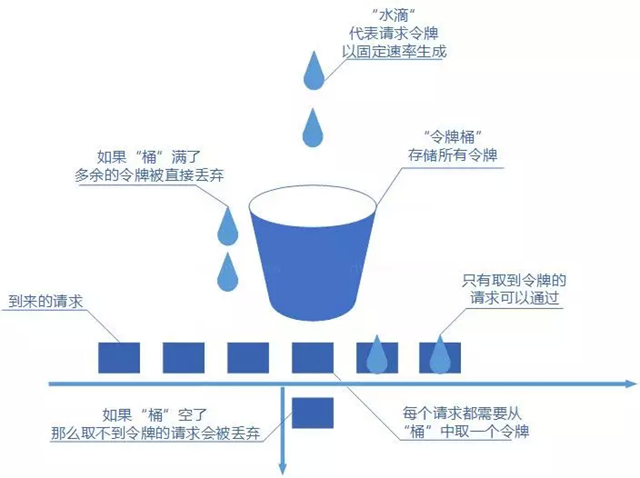 The token bucket algorithm is adopted by the industry because it is simple to implement and allows certain traffic bursts, which is user-friendly. Of course, we need to analyze each case, only the most suitable algorithm, there is no optimal algorithm.