Generally, large websites store their images on dedicated servers, which can be a good way to improve the performance of the website. A simpler way is to use the services provided by cloud vendors. Today we are going to introduce an open source implementation of the solution zing.

zimg is a set of Chinese open source programs designed and developed for image processing servers, aiming to solve the following three problems in image services.

The above three issues, in fact, are also mutually constrained and clamped, for example, to reduce the flow of traffic, it requires a large number of calculations, resulting in longer request processing time, the system processing capacity per unit of time decreases; and then for example, in order to store more pictures, it is inevitable to consume resources on the lookup, the same will also reduce the processing capacity. Therefore, although the picture service seems to be a simple business, it is not a trivial matter to actually do it. 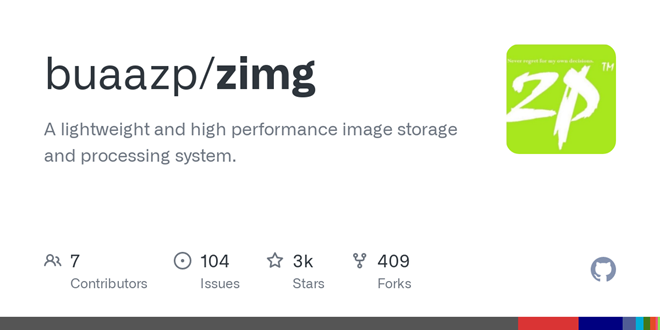 The following features are supported by zimg.

To have the best performance in the matter of presenting images, you first need to separate the image serving part from the overall business. Using a separate domain name and setting up a separate image server has many benefits, such as

The mainstream solution is to use Nginx for the front-end, PHP or self-developed modules for the middle, and physical storage for the back-end; for the more unusual ones, such as Facebook, they combine image request processing and storage into one, called haystack, which has the advantage that haystack only handles The advantage is that haystack only handles requests related to images, stripping away the cumbersome functions of an ordinary http server, making it lighter and more efficient, and also making deployment and operation and maintenance less difficult. zimg adopts a similar strategy to Facebook, taking the power of image processing into its own hands, handling most things by itself, and minimizing the introduction of third-party modules unless particularly necessary.

For the ultimate performance, zimg is developed entirely in C. It is generally divided into three layers, the front-end http processing layer, the middle image processing layer and the back-end storage layer. The following diagram shows the zimg architecture design. 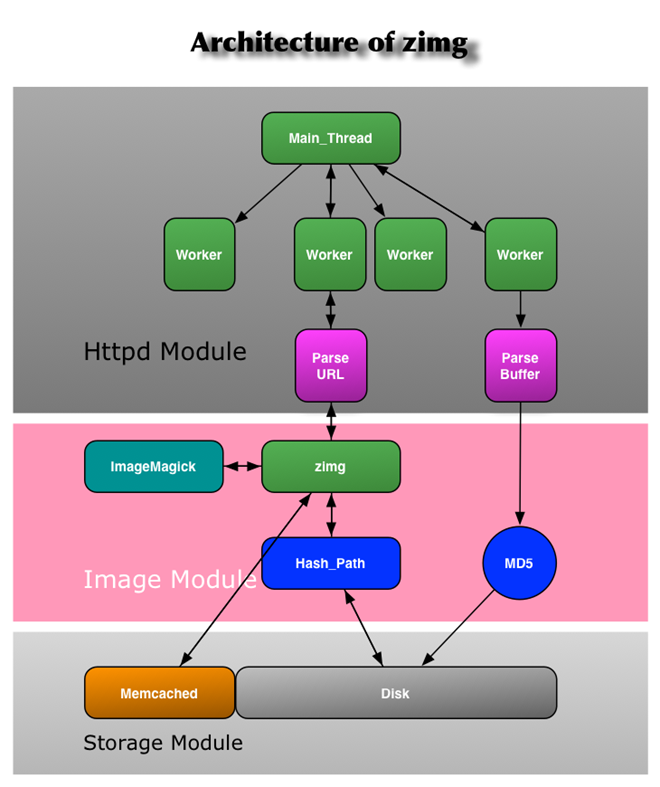 In order to avoid performance bottlenecks caused by databases, zimg does not introduce structured databases, and all image lookups are solved using hashing. In fact, the design of the image server is a game between I/O and CPU computing, and the best strategy is of course to continue to split: the CPU-sensitive http and image processing layers are deployed on machines with more computing power, the memory-sensitive cache layer is deployed on machines with more memory, and the I/O-sensitive physical storage layer is placed on machines equipped with SSDs, but not everyone can afford such an extravagant configuration. zimg compromises between cost and business requirements and currently only needs to be deployed on one server. The idea that zimg has chosen is to minimize I/O and put the pressure on the CPU, which has proven to be true, even on machines with poor hard drive performance; even if SSDs become fully popular in the future, the CPU’s computing power will increase accordingly, and overall zimg’s solution is not too unbalanced.

Although zimg is not sub-modular on the binary entity, for the reasons mentioned above, and at this stage is geared towards small to medium sized services that can be deployed on a single machine, the code is separated.

main.c is the entry point of the program, the main function is to handle the startup parameters, some of which function as follows.

zhttpd.c is the part that parses http requests and is divided into two main parts: GET requests look for images based on the request URL parameters and forward them to the image processing layer for processing, and finally return the results to the user; POST receives upload requests and then deposits the images in the calculated path. To achieve the overall design vision of zimg, zhttpd takes on a large part of the work and has some key points, which are highlighted below.

zimg.c is the part that calls imagemagick to process images. At this stage zimg serves standalone image servers with terabytes of storage, so the storage path uses a 2-level subdirectory scheme. Since the number of subdirectories in the same directory in Linux should preferably not exceed 2000, plus the MD5 value itself is a 32-bit hexadecimal number, zimg takes a very tricky way: according to the first six bits of MD5 for hashing, 1-3 bits are converted to hexadecimal number and divided by 4, the range falls exactly within 1024, with this number as the first level subdirectory; 4-6 bits are similarly The second level subdirectory is a folder named after MD5, and each MD5 folder stores the original image and other versions of the image as needed. Assuming that a picture takes up an average space of 200KB, the total capacity supported by a zimg server can be calculated: 1024 * 1024 * 1024 * 200KB = 200TB

In addition to path planning, another great feature of zimg is image compression. From the user’s point of view, the image returned by zimg only needs to look similar to the original image, and if the original image is really needed, it can be obtained by setting all parameters to null. Based on this condition, zimg.c compresses all converted images, which are almost indistinguishable to the naked eye, but the size is reduced by 67.05%. The specific processing is.

After such processing the traffic can be reduced to a great extent to achieve the design goals.

zcache.c is the section that introduces the memcached cache, and it is important to introduce the cache, especially after the volume of images rises. Caching is used as a very important feature in zimg, and almost all the lookup sections in zimg.c will first check if the cache exists. For example, if I want a (representing a certain MD5) image cropped to 100100 and then grayed out, the process is to first find if the cache of a&w=100&h=100&g=1 exists, and if not, to find if the file exists (the file name corresponding to this request is a/100100pg), and if it doesn’t exist, to find the color image cache of this resolution If it still does not exist, we will find out if the color image file exists (the corresponding file name is a/100*100p), if not, then we will query the original image cache, and if the original image cache is still not hit, we can only open the original image file, and then start cropping and graying, and then return it to the user and store it in the cache.

As you can see, if the cache is hit at some point in the above process, the number of I/O or image processing operations will be reduced accordingly. It is well known that the difference between memory and hard disk read/write speed is huge, so such a design will be very important for hotspot image resistance.

In addition to the above core code is some supporting code, such as log part, md5 calculation part, util part, etc.

Open http://localhost:4869 to see if the installation is successful.

If it’s too much trouble to install manually, just use the docker image

You can package your own image service based on zimg.