Spinnaker is a continuous delivery platform, originally developed by Netflix, for releasing software changes quickly and reliably. Spinnaker makes it easier for developers to focus on writing code without worrying about the underlying cloud infrastructure, and it integrates seamlessly with Jenkins It integrates seamlessly with Jenkins and other popular build tools. I’ve been wanting to try Spinnaker for a long time, but I’ve tried many times without success due to GFW, and this time I finally successfully deployed Spinnaker on a Kubernetes cluster after solving the proxy issue.

In this article, we will use helm3 to demonstrate the installation of Spinnaker on a Kubernetes cluster, and the corresponding environment version is shown below.

The installation and configuration of Helm3 is really simple, just install the Helm3 client on top of the node where kubectl is located, and by default it will read the kubeconfig file to access the cluster. We use the helm chart repository provided by Microsoft here.

Since we are using Kubernetes version 1.16.x, which deprecated some old APIs for many resource objects, such as Deployment, we can only use the apps/v1 version, and the Spinnaker chart package we are using here is still using the previous API version. So we need to download it manually and make a change: apps/v1.

Then change the apiVersion of Deployment, StatefulSet and other resource objects in the spinnaker chart template to apps/v1, also remember that if it is Deployment you need to add the selector.matchLabels field, you can use it directly I changed the chart template https://github.com/cnych/spinnaker-helm.

In the values.yaml file of the chart template, I specified halyard.spinnakerVersion=1.17.6, which is still a problem because of the apiVersion version, which is compatible with Kubernetes v1.16.x clusters, and replaced the default gcr.io image with a Microsoft image. In addition, the default gcr.io image is replaced with the Microsoft image source gcr.azk8s.cn, and there is also a very important thing is the storage designation, here we create a StorageClass resource object to provide storage, I am creating a Ceph RBD type of storage rook-ceph-block, of course any available StorageClass resource object is fine: the

It is necessary to specify the corresponding storage for halyard, redis, and mino, but of course it is possible to specify a suitable PVC directly, which can be decided here according to the actual situation.

Since the installation process is very time consuming, there may be a timeout for the helm install process above, which can be ignored.

However, since the gcr.io image will be used during the installation of Spinnaker, you will see a lot of Pod image pulling failure errors, at this time we can manually edit the Deployment object to change the image address.

For example, change the mirror address of the Deployment resource object spin-deck to

Replace the other resource objects in the same way, and after a normal replacement, the Pod will start normally after some time. The final list of Pods is shown below.

Just create the resource object above, and then do a DNS resolution of the domain spinnaker.qikqiak.com to access Spinnaker in your browser. 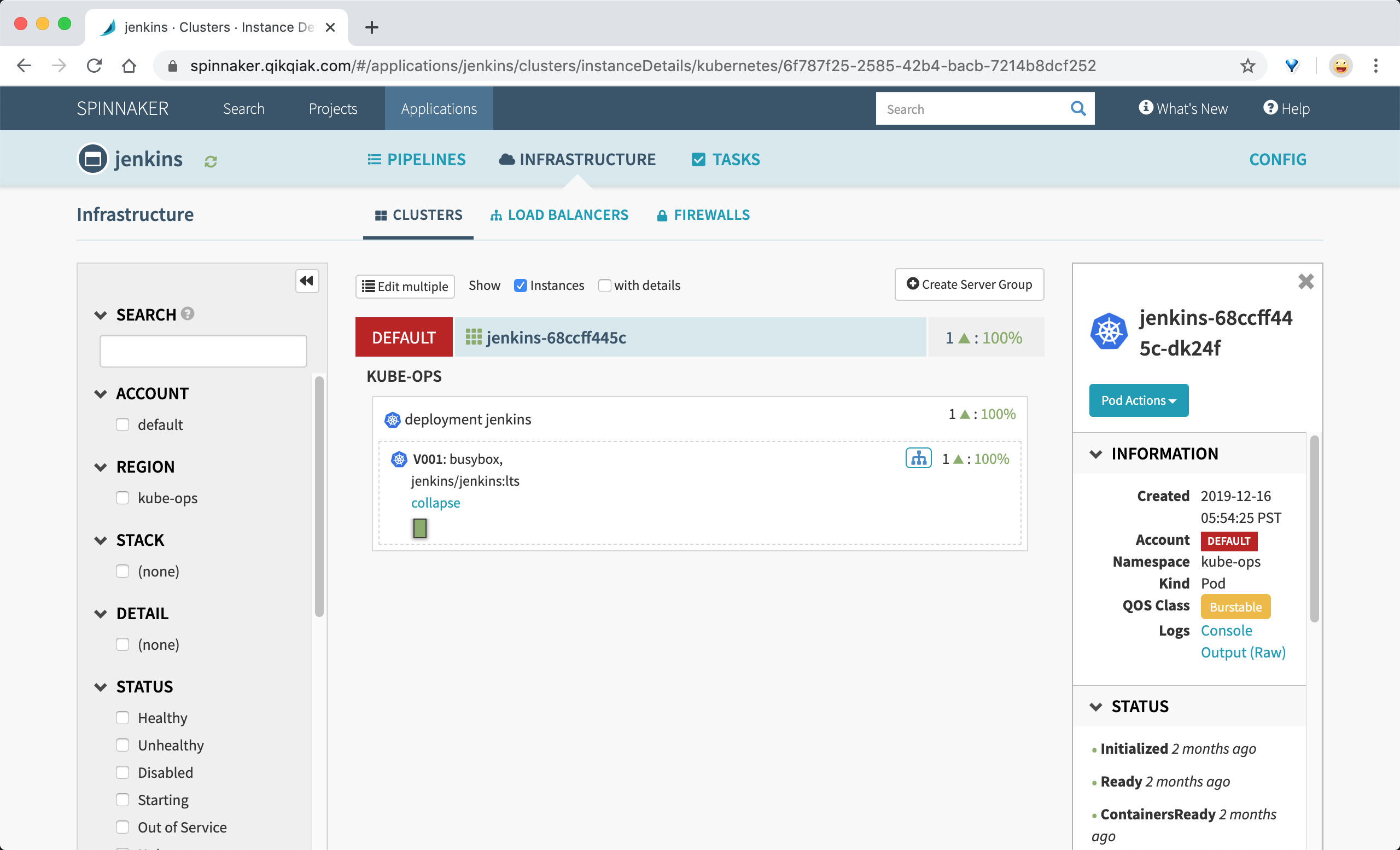 Here the installation is successful, of course, this is only the first step of the long journey it, and then we will slowly go to understand Spinnaker in the end what features worth our attention.