Installing Docker Daemon in a Pod

KinD is now dependent on Docker, so first we need to create an image that allows us to run Docker Deamon in the Pod, so that we can execute commands like docker run inside the Pod, but this is not the same as the DIND mode of mounting docker.sock on the host as we mentioned before This is different from the DIND mode of mounting the host docker.sock. There are still a lot of problems with running Docker Deamon in a Pod.

For example, we need to run Docker Daemon and some Kubernetes cluster tests in a container, and these tests depend on KinD and Docker Damon, and we may use systemd to run multiple services in a container, but there are some problems with using systemd.

To solve the above problem, we can use the following startup script in the container image.

However, it is important to note that we cannot use the above script as an entrypoint for the container; the entrypoint defined in the image will run in the container as PID 1 in a separate pid namespace; PID 1 is a special process in the kernel that behaves differently from other processes.

Essentially, the process that receives the signal is PID 1: it will be handled specially by the kernel; if it does not register a processor for the signal, the kernel will not fall back to the default behavior (i.e., kill the process). Since the kernel kills the process by default when the SIGTERM signal is received, some processes may not register a signal handler for the SIGTERM signal. If this happens, when Kubernetes tries to terminate the Pod, SIGTERM will be swallowed and you will notice that the Pod will be stuck in the Terminating state.

This is not really a new problem, but not many people are aware of it and keep building containers with this problem. We can solve this problem using the application tini as the entry point for the image, as follows.

This program will properly register the signal handler and forward the signal. It will also perform some other PID 1 things, such as reclaiming zombie processes in the container.

In the past, to make the cgroup file system available in the container, some users would mount /sys/fs/cgroup from the host to this location in the container. If we use it this way, we need to set -cgroup-parent to the following in the container startup script so that the cgroups created by Docker Daemon will be nested correctly.

Note: /proc/self/cgroup shows the cgorup path of the calling process.

However, this approach can sometimes be confusing for applications like cadvisor and kubelet, because binding mounts do not change the contents of /proc/<PID>/cgroup.

cadvisor will look at /proc/<PID>/cgroup to get the cgroup of a given process and try to get CPU or memory statistics from the corresponding cgroup. To solve this problem, we did another mount inside the container, from /sys/fs/cgroup/memory to /sys/fs/cgroup/memory/ docker/<CONTAINER_ID>/ (for all cgroup subsystems), which works well for this problem.

The new workaround is now to use cgroup namespace if you are running under a Linux system with kernel version 4.6+, and both runc and docker both add support for cgroup namespaces. However, Kubernetes does not currently support the cgroup namespace, but will soon do so as cgroups v2 support cgroups-v2.md).

While using it we found that when running a Kubernetes cluster online, sometimes the nested containers started by the Docker Daemon inside the container could not access the extranet, but worked fine on the local development computer, which most developers should encounter often.

Finally, it was found that when this problem occurred, the packets from the nested Docker container did not hit the POSTROUTING chain of iptables, so it was not masqueraded.

The full Dockerfile file and startup script are available on GitHub (https://github.com/jieyu/docker-images/tree/master/dind), or you can use the jieyu/dind-buster:v0.1.8 image directly to test.

Simply deploy under a Kubernetes cluster using the Pod resource list shown below.

Running KinD in a Pod

We have successfully configured Docker-in-Docker (DinD) above, so let’s start a Kubernetes cluster in that container using KinD. 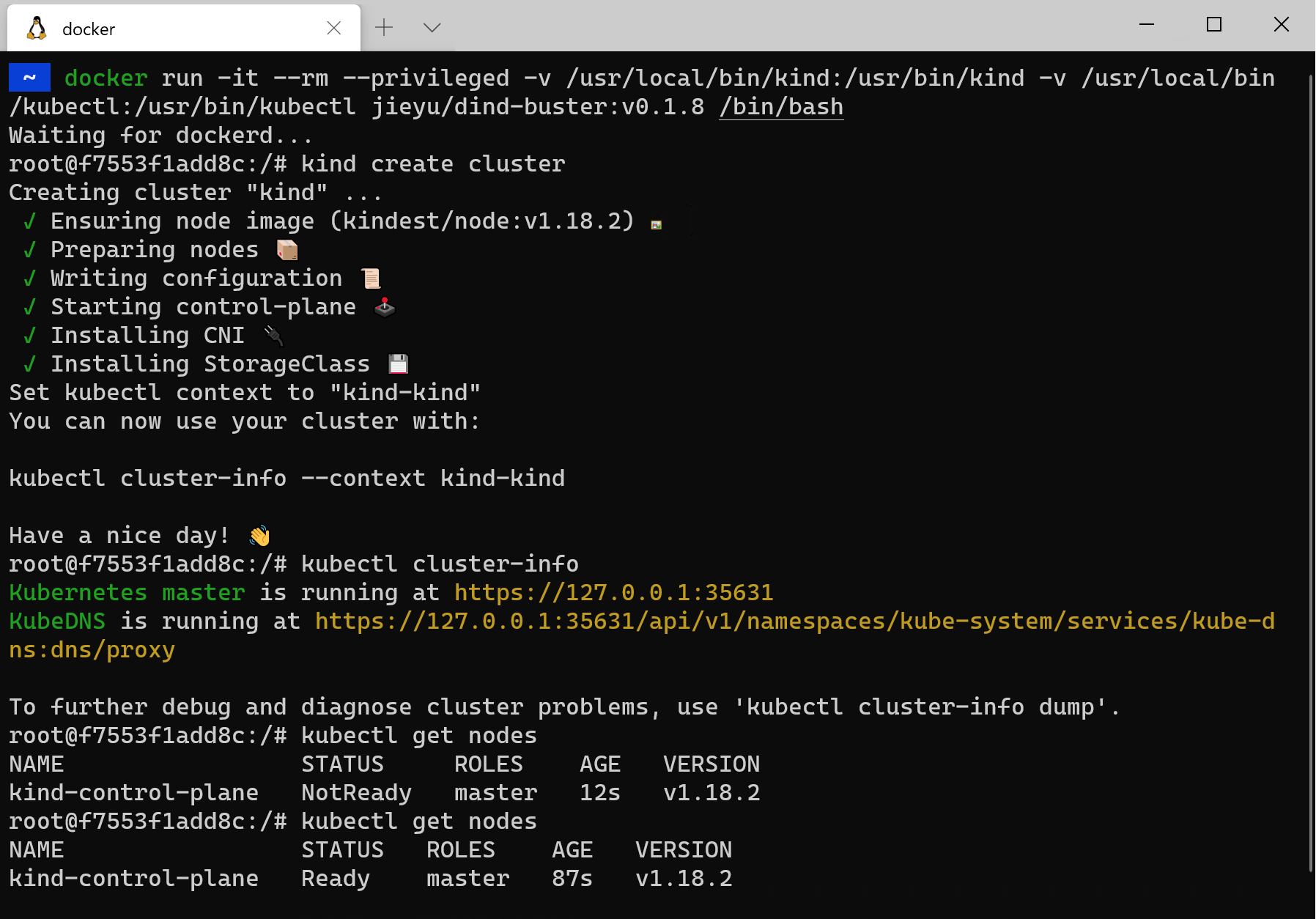 You can see that KinD works well in containers to create Kubernetes clusters. Next, let’s test this directly in Kubernetes.

We can see that using KinD in Pod to create a cluster fails because the kubelet running in the KinD nested container randomly kills the processes in the top-level container, which is actually still related to the cgroups mount discussed above.

However, when I was using KinD in v0.8.1, I was able to create clusters in the above Pods normally, so I don’t know if there is any special treatment for KinD-built clusters. 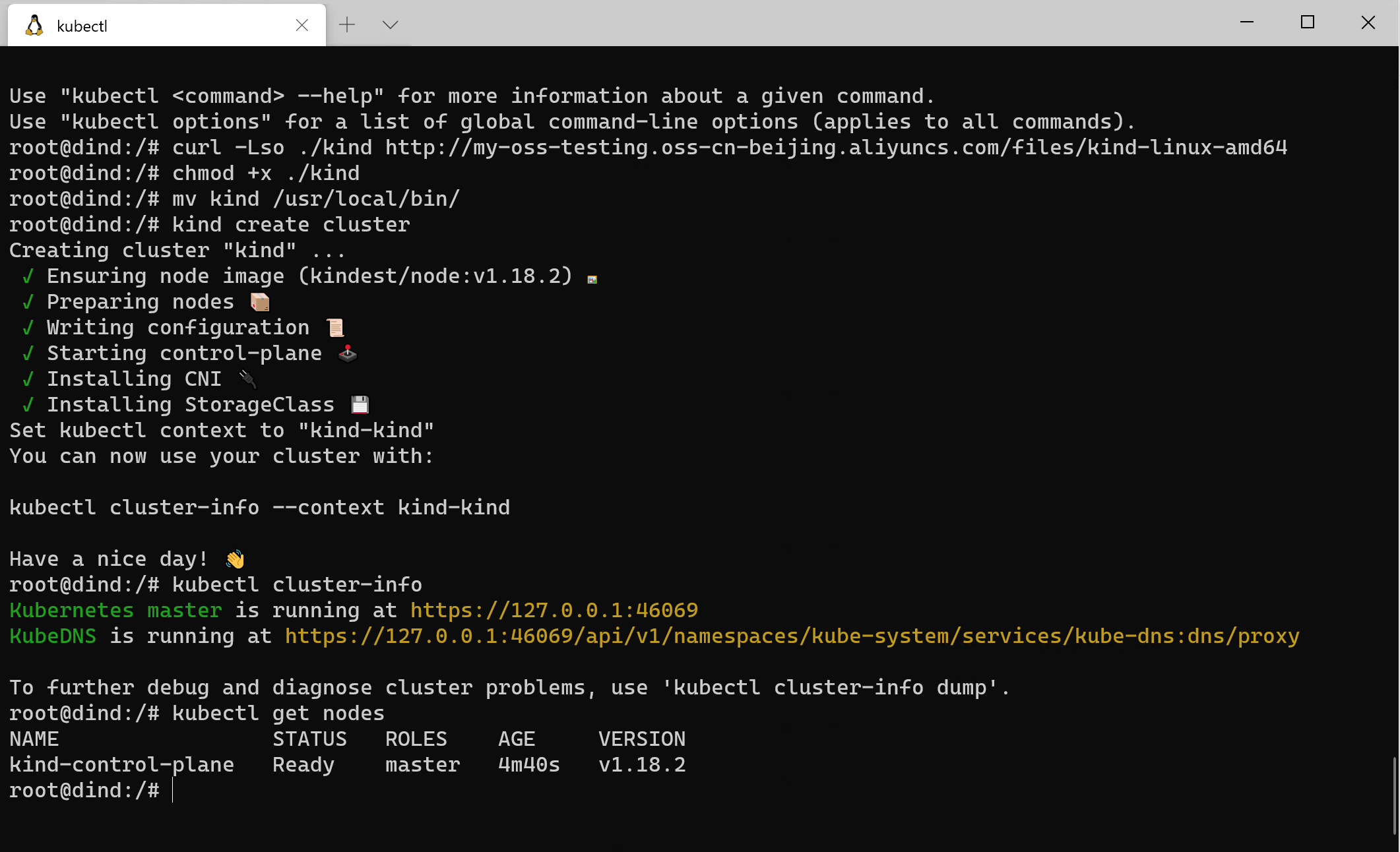 If you are experiencing the same problem as above, then you can continue to see the solution below.

When the top-level container (DIND) is running in a Kubernetes Pod, for each cgroup subsystem (e.g. memory), its cgroup path from the host’s perspective is /kubepods/burstable/<POD_ID>/<DIND_CID>.

This is the root cause: the kubelet inside the KinD node container sees the cgroup and thinks it should manage it, but cannot find a Pod associated with the cgroup, so it tries to delete the cgroup by killing the processes belonging to the cgroup, which results in random processes being killed. The solution to this problem is to set the -cgroup-root parameter of the kubelet to instruct the kubelet in the KinD node container to use a root path (e.g. /kubelet) for its Pods that does not have a cgroup. This allows you to start a KinD cluster in a Kubernetes cluster, which we can fix with the YAML resource manifest file below.

Once created using the resource list file above, we can go into the Pod and verify it in a moment.

It is also possible to use the Docker CLI directly to test.

The above image corresponds to the Dockerfile and startup script address: https://github.com/jieyu/docker-images/tree/master/kind-cluster 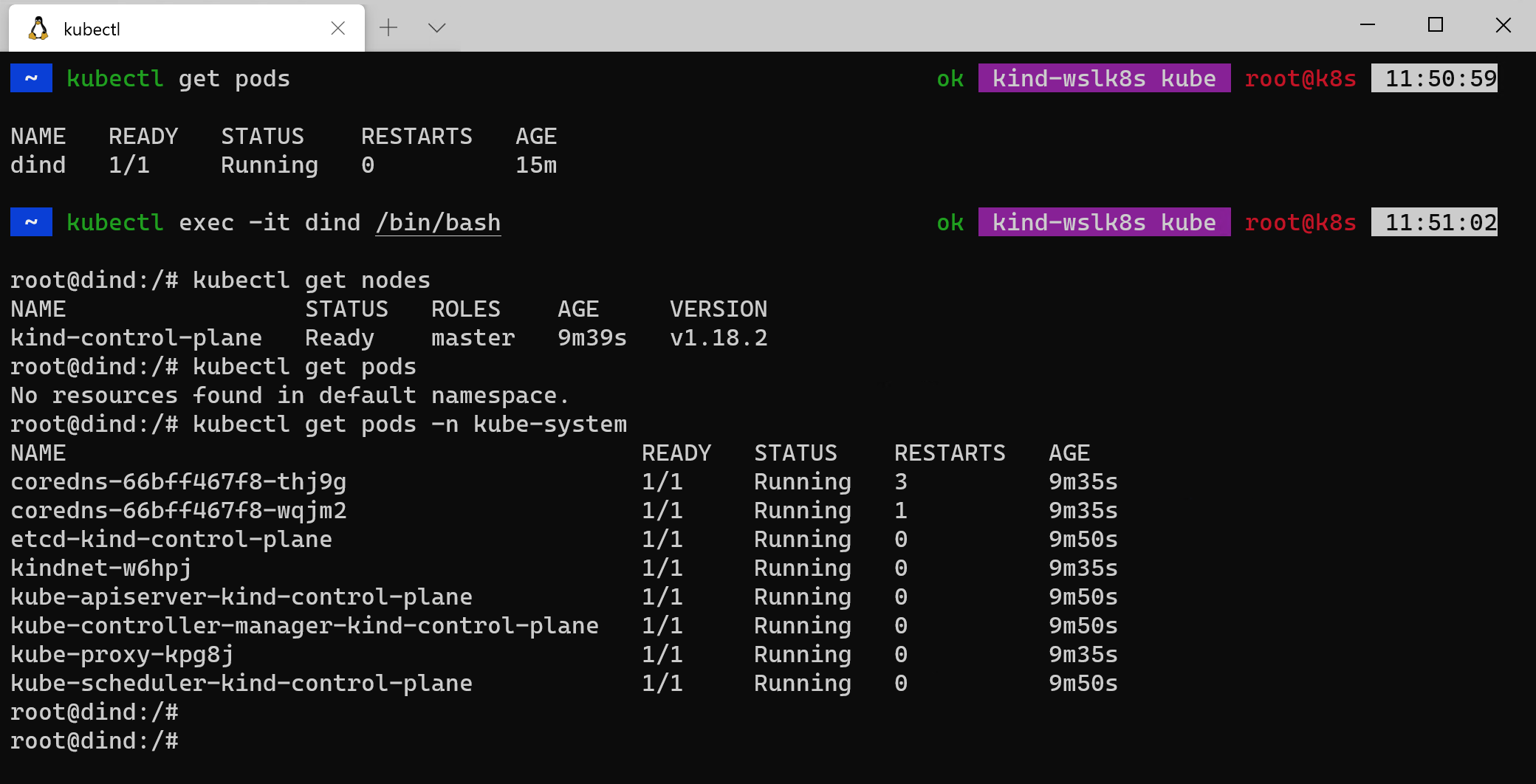 When implementing the above features, we encountered a lot of obstacles in the process, most of which are caused by the fact that Docker containers don’t provide complete isolation from the host, and some kernel resources like cgroups are shared in the kernel, which may also cause potential conflicts if many containers operate them at the same time. But once these problems are solved, we can easily run a standalone Kubernetes cluster in a Kubernetes cluster Pod, which should be considered a real Kubernetes IN Kubernetes, right?