For a non-stop restart of a Go program we need to address two issues.

We’ll see how endless does both of these things later.

The following is a brief introduction to two knowledge points for the content that follows.

Go signal notification works by sending the os.Signal value on the Channel. If we use Ctrl+C, for example, then a SIGINT signal will be triggered and the OS will interrupt the normal flow of the process and go to the appropriate signal handling function to execute the operation and then return to the interrupted place to continue execution when it is finished.

With a few lines of code, we can listen for SIGINT and SIGTERM signals. When Go receives a signal from the OS, it puts the signal value into the sigs pipeline for processing.

The exec package in Go wraps the Fork call nicely for us, and it allows us to use ExtraFiles to inherit open files from the parent process nicely.

The Cmd instance is returned by calling the Command command of the exec package, passing path (the path of the command to be executed), args (the arguments to the command), specifying additional open files to be inherited by the new process via the ExtraFiles field, and finally calling the Start method to create the child process.

Here netListener.File makes a copy of the file descriptor with the system call dup.

We can see the introduction to the dup command

The above diagram shows forking a child process which copies the file descriptor table of the parent process.

I’ll write a little bit about endless for those who haven’t used endless before, but you can skip it if you are familiar with it.

Verify the non-stop service created by endless below

The whole timeline is shown below.

And while waiting for the first request to be returned, you can see that two processes are running at the same time.

After the first response to the request, we can look at the process and see that the parent process has been shut down, allowing a seamless switch between parent and child processes.

For the implementation, I am using the endless implementation here, so the following principles and code are explained through its code. 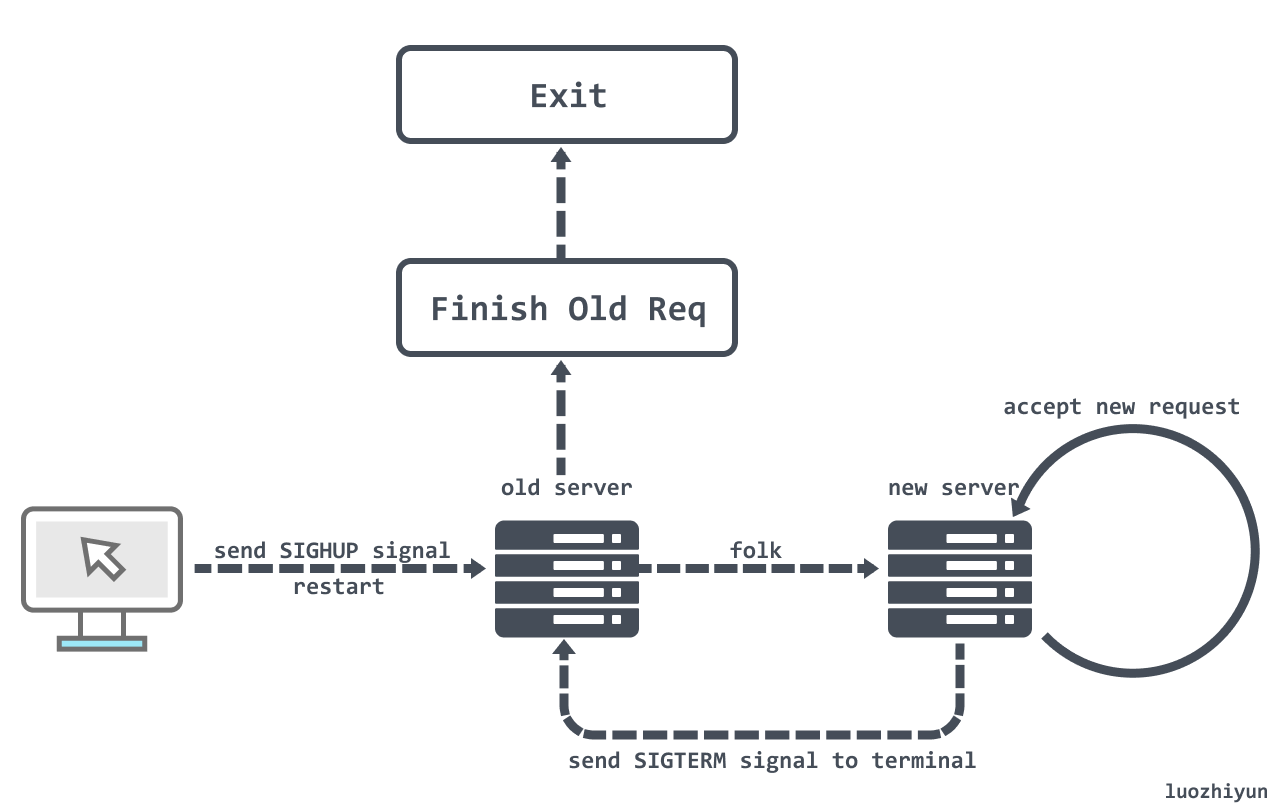 The principle of the non-stop reboot we want to do is shown in the figure above.

As we can see from the example above, the entry point for endless is the ListenAndServe function.

This method is divided into two parts, first initialising the server, then listening and processing the request.

Let’s first look at what an endless service’s Server structure looks like.

In addition to inheriting all the fields of http.Server, this endlessServer adds several status fields because it needs to listen for signals and determine if it is a new process.

Let’s see how to initialize endlessServer.

The initialisation here is all the usual parameters we see in net/http, including the ReadTimeout read timeout, WriteTimeout write timeout, Handler request handler, etc.

This method is actually quite similar to the net/http library in that it first gets the port to listen on and then calls Serve to process the data that is sent to it.

However, there are a few differences: endless needs to use signal listening in order to achieve a smooth restart, and it is different when it comes to getListener, as the child process needs to inherit the listen fd from the parent process in order to not close the listening port.

Signal processing is mainly a listening for signals, which are then cycled according to the different signals.

The code in this section is very simple, when we use kill -1 $pid here srv.sigChan receives the appropriate signal and goes into the case syscall.SIGHUP piece of logic.

Note that the syscall.SIGTERM signal sent by the child process to the parent process in the ListenAndServe method above is also handled here, and the shutdown logic is executed.

After getting to the case syscall.SIGHUP piece of logic, the fork function is called, and we will look at the fork logic again.

The fork code first fetches the different listen fd’s according to the server and wraps them in a list of files, then passes the file descriptors into the ExtraFiles parameter when calling cmd, so that the process can be seamlessly hosted on the port the parent is listening on.

Note that there is an ENDLESS_CONTINUE parameter in the env argument list which is checked when endless is started.

Let’s see what shutdown does when it receives a SIGTERM signal.

shutdown Here the connection is shut down first, as the child process is already started, so it is no longer processing requests and needs to shut down the port listening. The srv.hammerTime method is also called asynchronously to wait 60 seconds for the parent process to finish processing the request before shutting it down.

There’s nothing to say here if it’s the parent process, just create a port to listen on and return.

As shown below, the first three fd’s are reserved for standard input, output and errors, and fd 3 is incremented according to the array of ExtraFiles passed in.

In fact, here we can also experiment with the opening example.

We have learned through endless how to restart a service without stopping the service. I believe this feature will be used in many scenarios and students who have not used it can try it on their own systems.

In this way, it is ensured that the established connection is not interrupted and that the new service process can accept connection requests normally.