In fact, I had no intention of looking at the performance of JSON libraries, but I recently did a pprof on my project and found from the flame chart below that more than half of the performance consumption in business logic processing is in the JSON parsing process, so this article came about.

This article dives into the source code to analyze how the standard library in Go parses JSON, and then looks at what are some of the more popular Json parsing libraries, and what features these libraries have that can help us develop better in what scenarios.

The following libraries are introduced for analysis.

easyjson is a library that needs to generate serialization code for each structure like protobuf, which is very invasive and I personally don’t like it very much, so I didn’t mention it.

These libraries above are the more well-known and still iterating JSON parsing libraries that I can find with Star numbers greater than 1k, if there are any missing ones, you can contact me and I will add them.

The official JSON parsing library takes two parameters, one for the object to be serialized and the other for the type of the object.

Before the actual JSON parsing is performed, reflect.ValueOf is called to get the reflected object of the parameter v. Then it gets the first non-null character of the incoming data object to define which way to parse it.

Take the example of parsing an object.

By looking at the Unmarshal source code you can see that it uses a lot of reflection to get the field value, if it is a multi-layer nested JSON words, then you also need to recursively reflect the value, so you can imagine that the performance is very poor.

But if performance is not so important, it is actually a very good choice to use it directly, while the function is perfect and the official has been iterative optimization, maybe in future versions of the performance will also get a qualitative leap.

This library is as fast as its name implies, and its introduction page says this.

Fast. As usual, up to 15x faster than the standard encoding/json.

It is also very simple to use, as follows.

To use fastjson, you must first pass the parsed JSON string to the Parser parser for parsing, and then get it from the object returned by the Parse method. If it is a nested object, you can directly pass the corresponding parent and child key when passing the Get method.

fastjson is designed to be different from the standard library Unmarshal in that it divides JSON parsing into two parts: Parse and Get.

Parse is responsible for parsing the JSON string into a structure and returning it, and then fetching the data through the returned structure. The Parse parsing process is lock-free, so if you want to call Parse concurrently, you need to use ParserPool

fastjson iterates through the JSON from top to bottom, and then stores the parsed data in a Value structure.

This structure is very simple into.

This structure holds the recursive structure of the object. If you parse the JSON string in the example above, it will look like this structure. 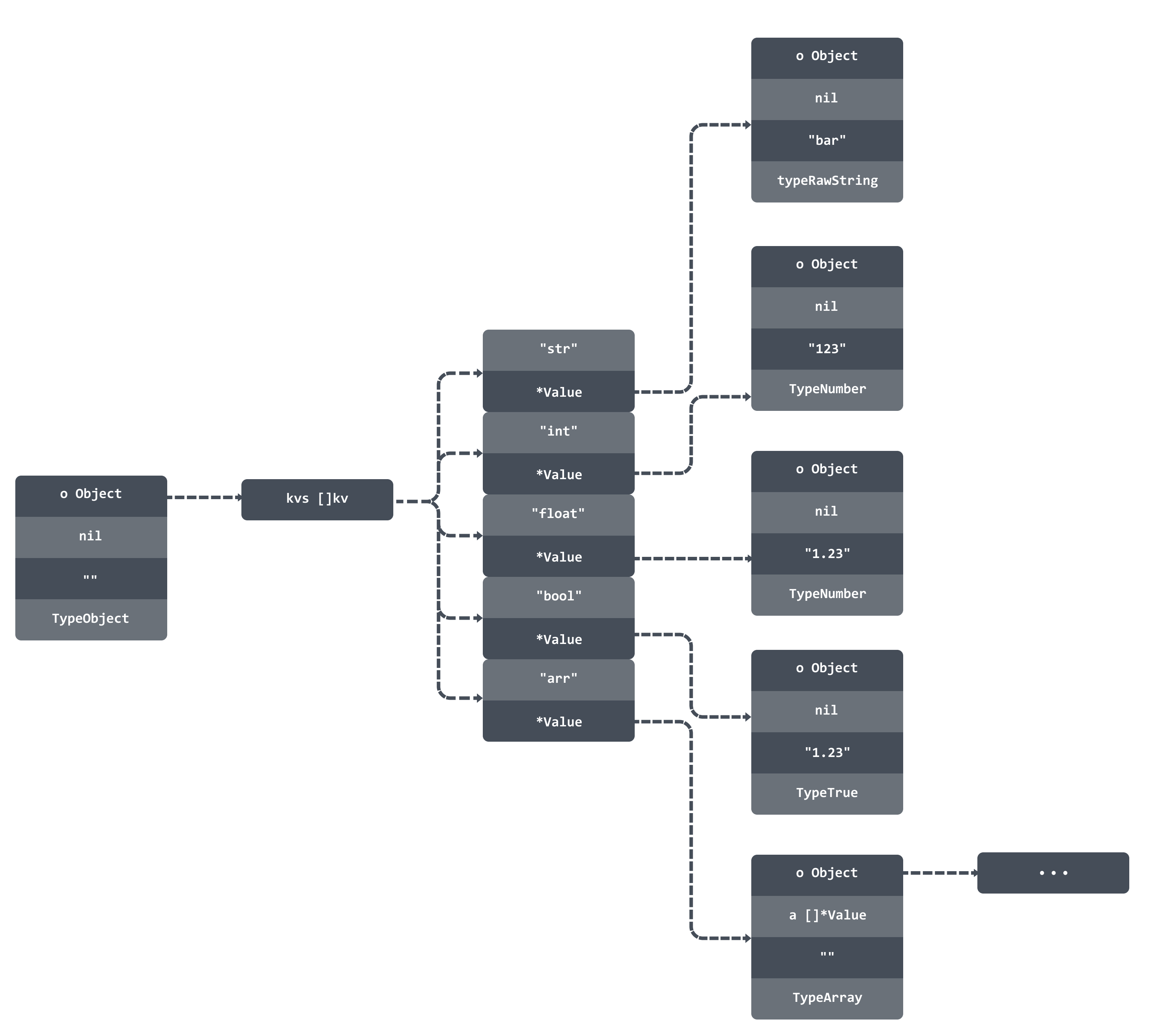 In terms of code implementation, the whole parsing process becomes very refreshing because there is no reflection part of the code. Let’s look at the main part of the parsing directly.

parseValue determines the type to be parsed based on the first non-null character of the string. Here an object type is used to do the parsing.

The parseObject function is also very simple, it will get the key value in the loop body, then call parseValue to recursively parse the value, parsing the JSON object from top to bottom until it finally encounters } and exits.

The above analysis shows that fastjson is much simpler to implement than the standard library, and its performance is much higher. After parsing the JSON tree with Parse, it can be used repeatedly, avoiding the need for repeated parsing and thus improving performance.

However, its functionality is very rudimentary, with no common operations such as JSON to Struct or JSON to map. If you just want to simply get the value in JSON, then it is very convenient to use this library, but if you want to convert the JSON value into a structure, you need to set the value one by one.

The use of GJSON is similar to fastjson, is also very simple, as long as the parameters passed in the json string and the need to obtain the value can be.

In addition to this feature simple fuzzy matching is also possible, with support for wildcards * and ? in the key. , * matches any number of characters, and ? matches a single character, as follows.

Modifier operations are also supported in addition to fuzzy matching.

children|@reverse first reads the array children, then flips it with the modifier @reverse and returns it, outputting it.

@flatten returns the inner array of the array nested after flattening it to the outer one.

There are some other interesting features, you can check the official documentation.

The Get method parameter of GJSON is composed of two parts, one is a JSON string, and the other is called Path, which indicates the matching path of the JSON value to be obtained.

In GJSON, because there are many defined parsing scenarios to be met, parsing is divided into two parts, and the Path needs to be parsed first before traversing the parsed JSON string.

During the parsing process, the parsed content is not stored in a structure like fastjson, which can be used repeatedly. So when you call GetMany to return multiple values, you actually need to iterate through the JSON string several times, so it’s less efficient.

In addition, the JSON is not checked when it is parsed, even if the string is not a JSON, it will still be parsed, so the user needs to make sure it is a JSON.

Inside the Get method you can see a long string of code that is used to parse various Paths, and then a for loop that iterates through the JSON until it finds ‘{’ or ‘[’, and then does the appropriate logic to process it.

In the above look at parseObject this code is not actually want to let you learn how to parse JSON, and traverse the string, but want to let you see how a bad case. for loop layer after layer, if one after another to see my San value dropped wildly, this code does not look very familiar to you? Is it a bit like the code written by a colleague you met at work?

Note that if you need to parse the returned JSON value, GetMany function will iterate through the JSON string again and again according to the specified key value, parsing to map can reduce the number of iterations.

This is also one of the more popular and claimed high performance, capable of parsing ten times faster than standard libraries.

jsonparser is also a byte slice of JSON that can be passed in to quickly locate the corresponding value and return it by passing in multiple key values.

And when traversing the JSON string by means of a loop to reduce the use of recursion, reducing the depth of the call stack, to a certain extent, can also improve performance.

In terms of functionality, the ArrayEach, ObjectEach, and EachKey functions can be passed into a custom function to achieve personalized requirements through the function, making it much more practical.

For jsonparser, the code is nothing to analyze, very clear, interested in their own to see.

The reasons for the high performance of jsonparser compared to the standard library can be summarized as follows.

In addition to the design of the api is also very practical, ArrayEach, ObjectEach, EachKey and other three functions can be passed into a custom function in the actual business development to solve a lot of problems.

The disadvantage is also very obvious, you can not check the JSON, even if the input is not JSON.

Parse a simple structured string of about 190 bytes in size

Parsing a string with a certain complexity and a size of about 2.3KB

Parsing strings of higher complexity, about 2.2MB in size.

Nonetheless, functionally, each has certain features fastjson has the simplest api operation; GJSON offers fuzzy lookups and the highest degree of customization; jsonparser provides a degree of convenience in achieving high-performance parsing and also inserts callback functions for execution.

To sum up, back to the beginning of the article, for my own business, the business is only a simple parsing of some of the fields of the JSON string returned by the http request, and the fields are determined, no search function, but sometimes need to do some custom operations, so for me jsonparser is the most appropriate.

So if you have certain requirements for performance, you may want to pick a JSON parser with your business situation.