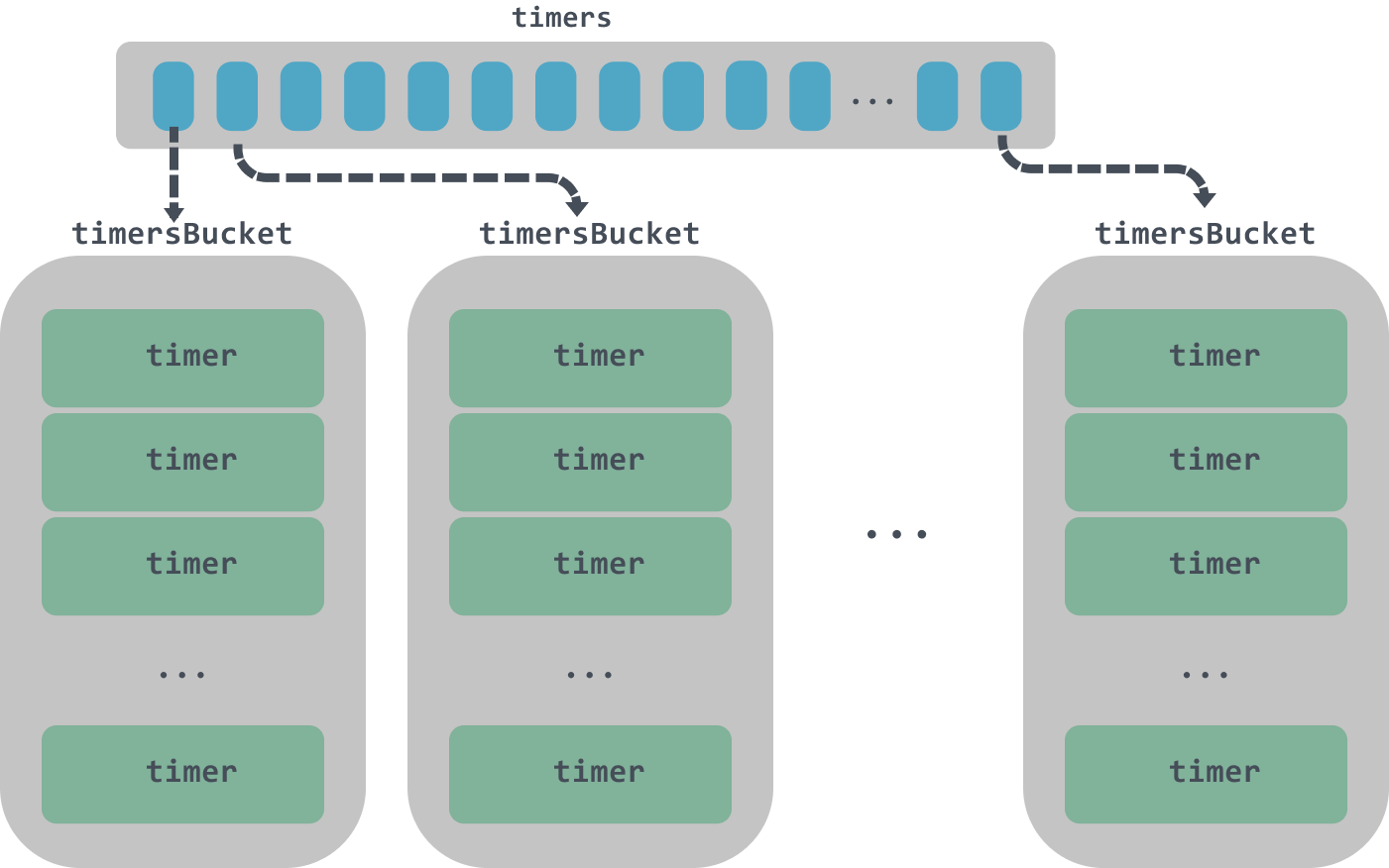 The following is the source code for version 1.13 of runtime.time.

As you can see from the assignBucket method above, if the number of processors P on the current machine exceeds 64, timers on multiple processors may be stored in the same bucket timersBucket.

The timerproc continuously fetches the top element from the timersBucket, executes if the timer at the top of the heap is due, sleep if no task is due, and calls gopark to hang until a new timer has been added to the bucket.

timerproc calls notetsleepg when it sleeps, which in turn raises an entersyscallblock call, which actively calls handoffp to unbind M and P. When the next timer time comes, M and P are bound again, and the frequent context switching between processor P and thread M is one of the timer’s The frequent context switches between processor P and thread M are also one of the main performance impact factors of the timer.

Changes to the timer since 1.14

In Go after version 1.14 the timersBucket has been removed and all timers are stored in P as a minimal quadruple heap. 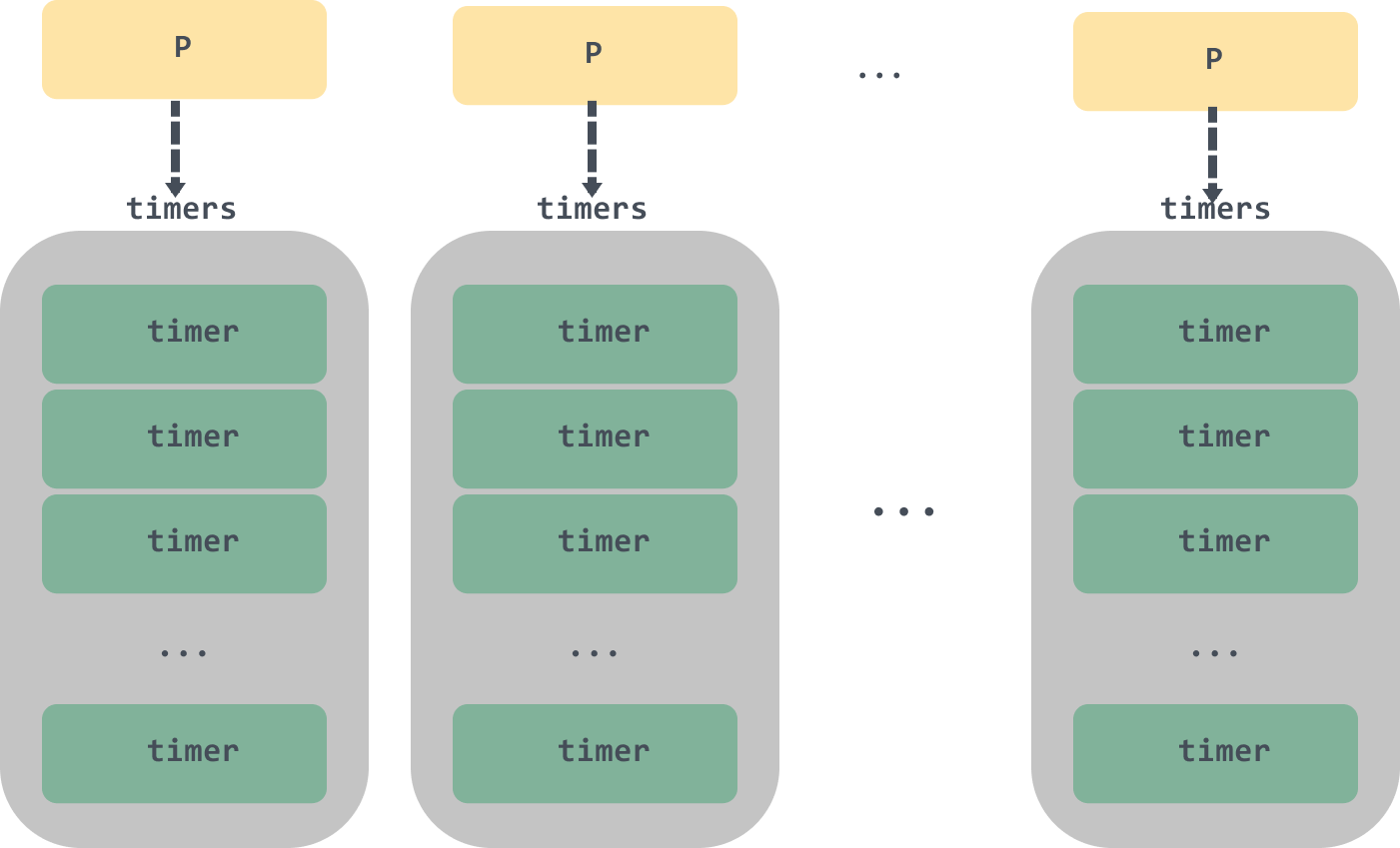 The timer is no longer scheduled using timerproc asynchronous tasks, but is instead triggered by a scheduling loop or system monitor scheduling, reducing the performance loss associated with context switching between threads and allowing the timer to be executed more promptly by using the netpoll blocking wakeup mechanism.

The timer field C allows us to know when the timer is due in time. C is a buffered channel of type chan time. Once the expiry time is hit, the timer will send an element of type time.

time.After is generally used in conjunction with select.

time.Afterfunc can execute a function after the set time has elapsed.

Let’s start by looking at how the NewTimer method creates a Timer.

We know that startTimer actually calls the runtime.time.startTimer method. This means that time.Timer is just a layer of wrap on the timer in the runtime package, and the core functionality of this layer itself is to convert the underlying timeout callback to send a channel message.

The startTimer method will turn the passed in runtimeTimer into a timer and then call the addtimer method.

In addition to this, the timer has a number of flag bits to indicate status.

Here is a look at the implementation of each of the important functions in addtimer.

The doaddtimer function is actually quite simple, it mainly sets the timer to be associated with P, adds the timer to P’s timer list, and maintains the order of the timer list’s minimum heap.

The logic for stopping a timer is primarily a change in the timer’s state.

If the timer is in another state:

So instead of deleting the timer during termination, it marks a state and waits to be deleted.

modtimer enters the for loop and does the state setting and necessary fields depending on the state; if the timer has been deleted, it needs to be re-added to the timer list; if the timer is modified for a time less than the time before the modification, set the state to timerModifiedEarlier, modify the time earlier and also trigger a netpoll interrupt.

After talking about how to add timers, let’s look at how timers are run. timers are run by the runtime.runtimer function, which checks the state of the timer at the top of the smallest heap on P and does different things depending on the state.

Inside runtimer a for loop is started that keeps checking the status of the first element of P’s timer list.

Here’s what I find interesting, timers are triggered in two ways.

The entire scheduling loop has three places to check for an executable timer.

Here’s a look at what checkTimers does.

The checkTimers do several things.

The system monitor is a Go language daemon that monitors the system in the background and responds when something unexpected happens. It checks the Go language runtime state at regular intervals to ensure that no exceptions have occurred. We won’t focus on system monitoring here, just the timer-related code.

When we call runtime.addtimer to add a timer from the beginning, it will runtime.wakeNetPoller to interrupt the netpoll, so how does it do that? Let’s start by looking at an official example.

In the above example, runtime.Netpoll is first called to block and wait, and then runtime.NetpollBreak is cyclically dispatched to interrupt and block.

When runtime.findrunnable is called to perform a preemption, a time is passed in at the end which blocks the call to netpoll, and if there is no event break, then the round-robin scheduling will wait until netpoll times out before proceeding further.

So a netpoll interrupt when calling runtime.addtimer to add a timer will make it more responsive to time-sensitive tasks like timers.

Comparing timer version 1.13 with timer version 1.14, we can see that even a single timer has been optimized in the go language. Instead of maintaining 64 buckets and running asynchronous tasks in each bucket, the timer list is now hooked directly onto P. This not only reduces performance loss from context switching, but also reduces contention between locks, resulting in performance comparable to that of the timer wheel.