Recently, Microsoft revealed the Visual Studio Code Java development roadmap for 2022 in a developer blog and below is an overview image posted by Microsoft outlining the improvements and changes they will be making in 2022. The image is relatively concise, so follow along to see exactly what changes are in store for each item. 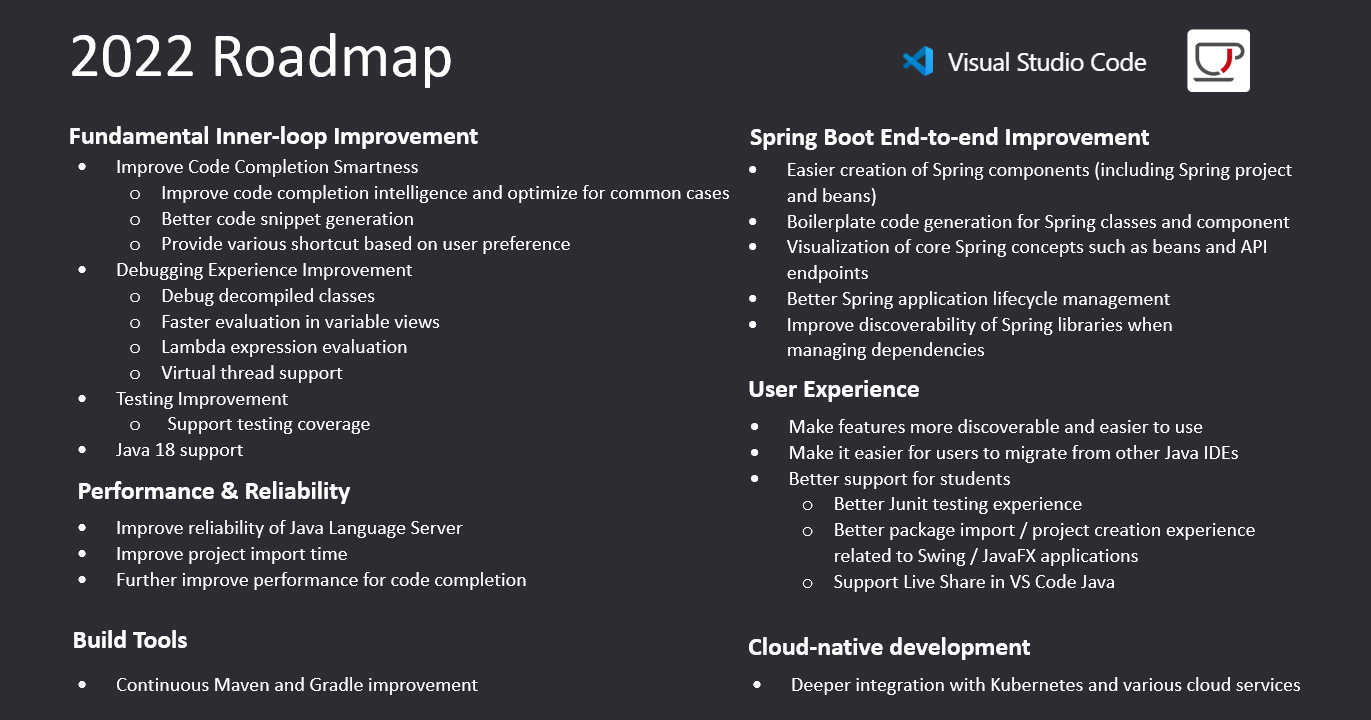 According to Microsoft, in 2021, more than 1.5 million developers will be developing in Java in VS Code. It is probably this sheer number that has led Microsoft to decide to continue to significantly improve the functionality and development experience of Java.

The basic inner-loop experience affects developers’ day-to-day productivity and efficiency, and this area will continue to be a primary focus for Microsoft. Microsoft will improve the intelligence of code completion suggestions, providing and generating more relevant code snippets, in addition to providing various shortcuts (such as “syso” and “sout”) based on user preferences.

In addition to enhancing the experience of writing code, Microsoft will also further improve the debugging experience for developers. In 2022, VS Code will allow developers to debug decompiled classes, evaluating them faster in variable view and lambda expression evaluation. Microsoft will also explore the possibility of enabling virtual threads driven by the new Project Loom to improve debugging performance.

VS Code will also improve testing in Java in 2022, with displaying test coverage being one feature that officials are keen to support, a feature that could further improve the Java testing experience. A final focus on the basic development experience is the support for Java 18 in Microsoft’s roadmap for 2022.

Microsoft has also learned from the community that if a project has many dependencies to download, it can take a long time to import them for the first time, so they plan to address this issue. Last but not least, Microsoft will also reduce the response time for code patching.

Build and dependency management has always been a key part of Java development, especially for large and multi-module projects. Microsoft will continue to add new features to the Gradle for Java extension and improve the existing Maven extension.

The Spring Boot framework is one of the most popular Java frameworks, allowing developers to easily build microservices or web applications. The current Spring Boot Extension Pack (Spring Boot Extension Pack) includes many features to optimise the Spring development experience on Visual Studio Code. Based on feedback from the Spring developer community, Microsoft plans to go one step further and they will be working with VMWare to make improvements to the core Java extensions and Spring extensions in the following directions and content.

Microsoft says that in 2021 they are encountering a lot of situations where developers are asking to use features that already exist but they can’t find them because they are hard to discover. Therefore, making features easier to use and more discoverable will be another focus for Microsoft. As different Java developers may migrate to VS Code from different Java IDEs, Microsoft will make it easier for developers to migrate settings and configurations from other IDEs.

Cloud-native is one of the most popular topics in the software development industry. With cloud-native development, developers need to deal with microservices, cloud platforms, Kubernetes and more.

To address the needs of developers in this area, Microsoft plans to deeply integrate VS Code with Kubernetes and the interaction with different cloud services such as Azure Spring Cloud. With Visual Studio Code’s remote development extensions and GitHub Codespaces, Microsoft is committed to bringing a better cloud-native development experience to Java developers.

In 2022, Visual Studio Code will have a number of updates for Java development, and if developers have additional suggestions, they can create a new issue on Microsoft VS Code’s GitHub issue page.