The core team is currently looking at restructuring the project’s leadership to provide more pathways for community members to become actively involved in the project’s stewardship. Swift has gradually introduced more workgroups to focus on technical and non-technical investments (an idea that has been successful in other language and OSS projects). We are looking to push that idea further. In the coming weeks, we hope to introduce a new language workgroup that will focus on the core of the language evolution itself, splitting off this responsibility from the core steering of the project. The intent is to free the core team to invest more in overall project stewardship and create a larger language workgroup that can incorporate more community members in language decisions. More details will be coming soon.

The announcement said Chris Lattner had taken a hiatus last year and decided to leave the core team to focus his time on other projects. “It has been one of the greatest privileges of my life to work with Chris on Swift. I can’t express how grateful I am to him for leading the project from the first line of code to driving it through the critical formative years to make it a language to be reckoned with on the world stage.” 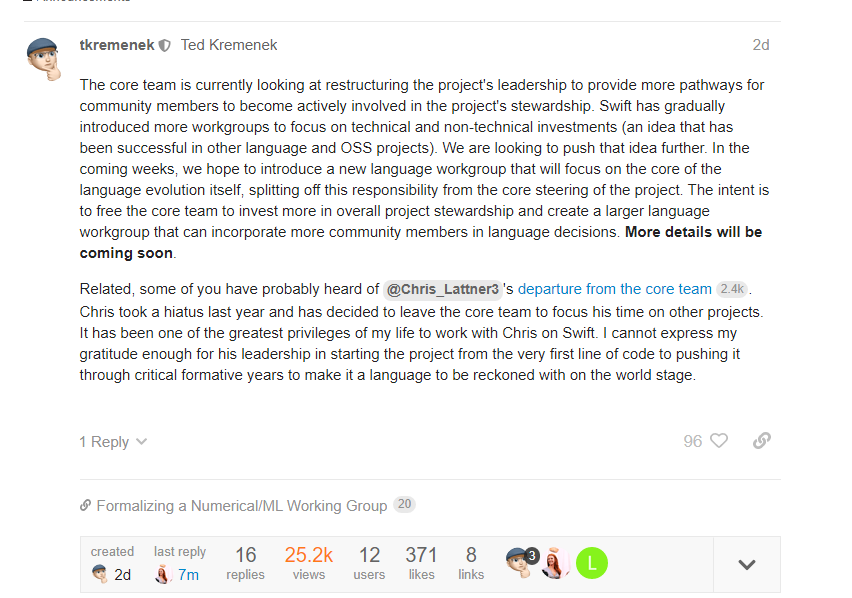 Chris Lattner revealed himself in a post about “whether to add a syntactic sugar”: The main reason for his departure was the “toxic environment” in the Swift core team meetings.

Swift is important to me, so I’m happy to spend a lot of time helping to improve and guide it …… As a result, my decision to leave the core team last summer was not an easy one.

The root cause of my decision to leave the core team was the toxic environment of the conference itself. The catalyst was one particular meeting last summer: after being insulted and yelled at through WebEx (not for the first time, and not just by a core team member), I decided to take a break. Last fall, I prompted leadership to discuss the situation with me; but after avoiding dealing with the issue, they made excuses and made it clear they weren’t going to do anything about it. As a result, I decided not to return. However, they assured me that they “want to make sure that things are better for others in the future based on what we have talked about. 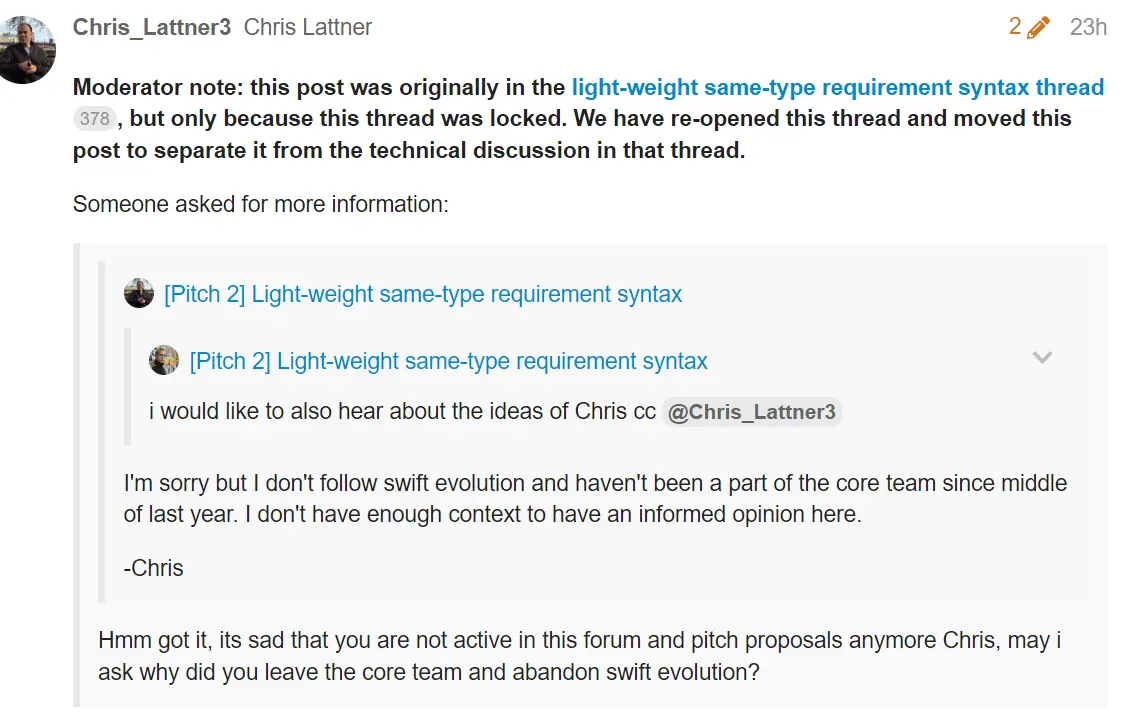 Chris believes that his ideas and those of some community members have become increasingly unappreciated and even ignored by the core team; and that there are some problems with team transparency. “I’m just wasting my time. I don’t think my feelings are unique here.”

It’s clear that Swift doesn’t affect me anymore, and some of the design premises I care about (like “simple things that compose”) don’t seem to be popular anymore. It’s also clear that I have many other interests besides Swift, and there’s no shortage of things to spend time on. I’m the kind of person who always looks forward, so while this situation is sad, I’ve moved on and am definitely much happier not having to deal with it anymore!

Swift has a ton of well-meaning, super-talented people involved and driving it. They’re trying to do their best in a complex situation and are under a lot of pressure (including lofty goals, fixed timelines, deep queues of bugs that need to be cleared, internal people who want to review/design these things before the public gets to them, and pressure from outside their team) that induces weird interactions with the community. By the time things get to us, the plan has been in the works for so long that sometimes individuals become dependent on the design they put a lot of effort into. This leads to challenges for everyone involved.

I think Swift is an amazing language and has a long and successful future, but it’s certainly not a community-designed language, which is not ambiguous. The new ideas on how to improve things sound promising – I hope they address the basic motivational system challenges that engineers/leaders face that lead to the symptoms we see. I think a healthy and inclusive community will continue to benefit the design and evolution of Swift.

Currently, Chris’ focus is on being the co-founder and CEO of Modular AI, seeking to revolutionize the AI/ML infrastructure world.