O’Reilly, an online learning platform, has released a new Technology Trends for 2022 report. Based on data generated by the platform from January to September 2021 and compared to the same period in 2020, the report provides a look at trends in the technology industry, with O’Reilly’s user base encompassing millions of developers from more than 100 countries worldwide.

The report is based on four specific types of data: search queries, questions posed to the AI engine O’Reilly Answers, resource usage by title, and resource usage by topic. It is important to note that for content not yet included on the platform (e.g., QUIC protocol or HTTP/3, etc.), the statistics will be zero, regardless of the level of user interest.

The findings point to ransomware driving developer interest in cybersecurity, the Internet of Things and game development spurring interest in C++, a 35-year-old programming language. It’s also possible that developers are looking at newer languages to expand their edge.

Interest in C++ has grown significantly over the past year (13%), with about twice as much use as C. For its part, O’Reilly notes that C++ is dominant in game programming, but they suspect that the language will also become dominant in embedded systems and is being used more and more extensively to develop microservices. On the other hand, while C has traditionally been the primary language for tool developers (all Unix and Linux utilities are written in C), that role may have shifted to newer languages such as Go and Rust.

Go and Rust continue to grow. Since last year, content usage about Go has grown by 23 percent and Rust by 31 percent. “Rust reflects a new way of thinking about memory management and concurrency. In addition to providing a clean and relatively simple model for concurrency, Go represents a shift in languages that are becoming more complex with each new release.”

Despite the significant increase in interest in C++, Python, Java and JavaScript maintained their leadership positions. Java is up 4 percent, Python is down 6 percent, and JavaScript is down 3 percent. In addition, Scala and Kotlin declined by 27% and 9%, respectively. 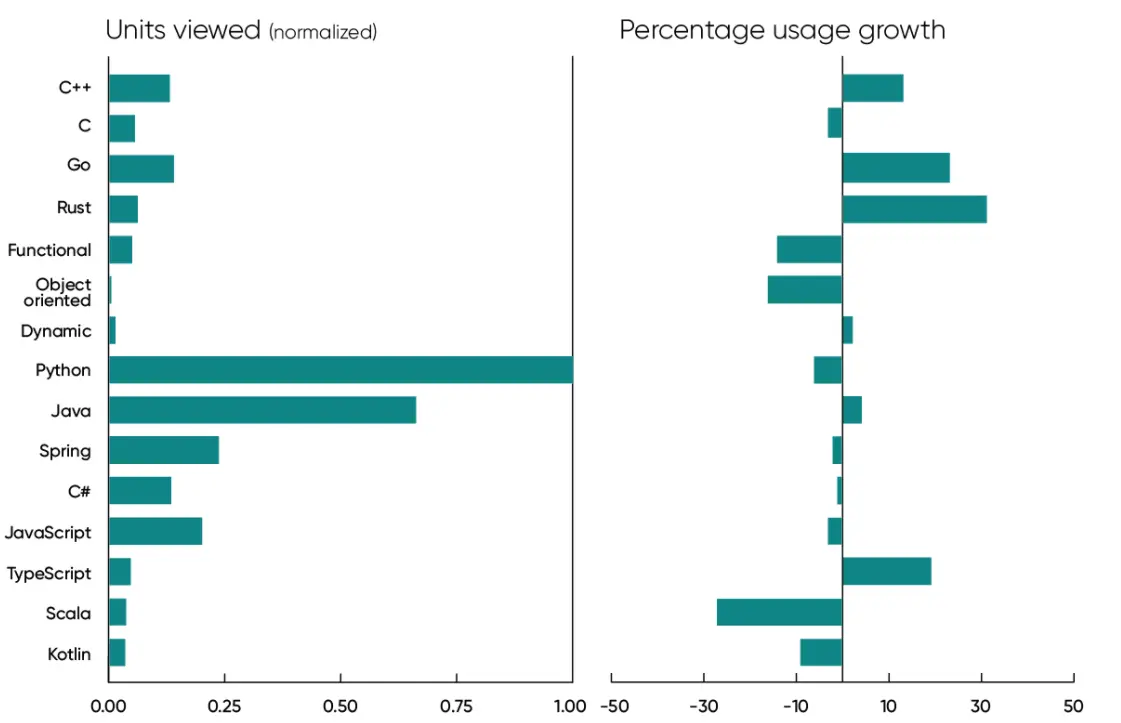 Software architecture, Kubernetes and microservices are the three most used topics in 2021. They also saw very healthy year-over-year growth of 19%, 15% and 13%, respectively. Interest in container software has also increased 137% given the pace of cloud application development; Docker has seen less growth but higher usage.

More details can be found at view full report.