Redis is a very popular in-memory database that allows for very high read and write performance by keeping data in memory. However, once a process exits, all of Redis’ data is lost.

To solve this problem, Redis provides two persistence schemes, RDB and AOF, to save data in memory to disk and avoid data loss. In this article, we will focus on the AOF persistence scheme, some of its problems, and discuss the design and implementation details of Multi Part AOF (hereinafter referred to as MP-AOF, a feature contributed by the AliCloud Database Tair team) in Redis 7.0 (released in RC1).

AOF ( append only file ) persistence records each write command as a separate log file, and plays back the commands in the AOF file for data recovery purposes when Redis starts.

Since AOF records each redis write command as an append, as Redis processes more write commands, the AOF file becomes larger and the time to replay the commands increases, to solve this problem, Redis introduces the AOF rewrite mechanism (hereafter called AOFRW). AOFRW removes redundant writes from the AOF and rewrites them in an equivalent manner, generating a new AOF file to reduce the size of the AOF file.

Figure 1 shows the principle of AOFRW implementation. When AOFRW is triggered, Redis first forks a child process to perform a background rewrite operation, which rewrites a snapshot of Redis data at the moment of the fork to a temporary AOF file called temp-rewriteaof-bg-pid.aof.

When the child process finishes the rewrite operation and exits, the main process will handle the rest in the backgroundRewriteDoneHandler. First, the unconsumed data in the aof_rewrite_buf during the rewrite is appended to the temporary AOF file. Second, when everything is ready, Redis will use the rename operation to atomically rename the temporary AOF file to server.aof_filename, at which point the original AOF file will be overwritten. At this point, the entire AOFRW process is complete. 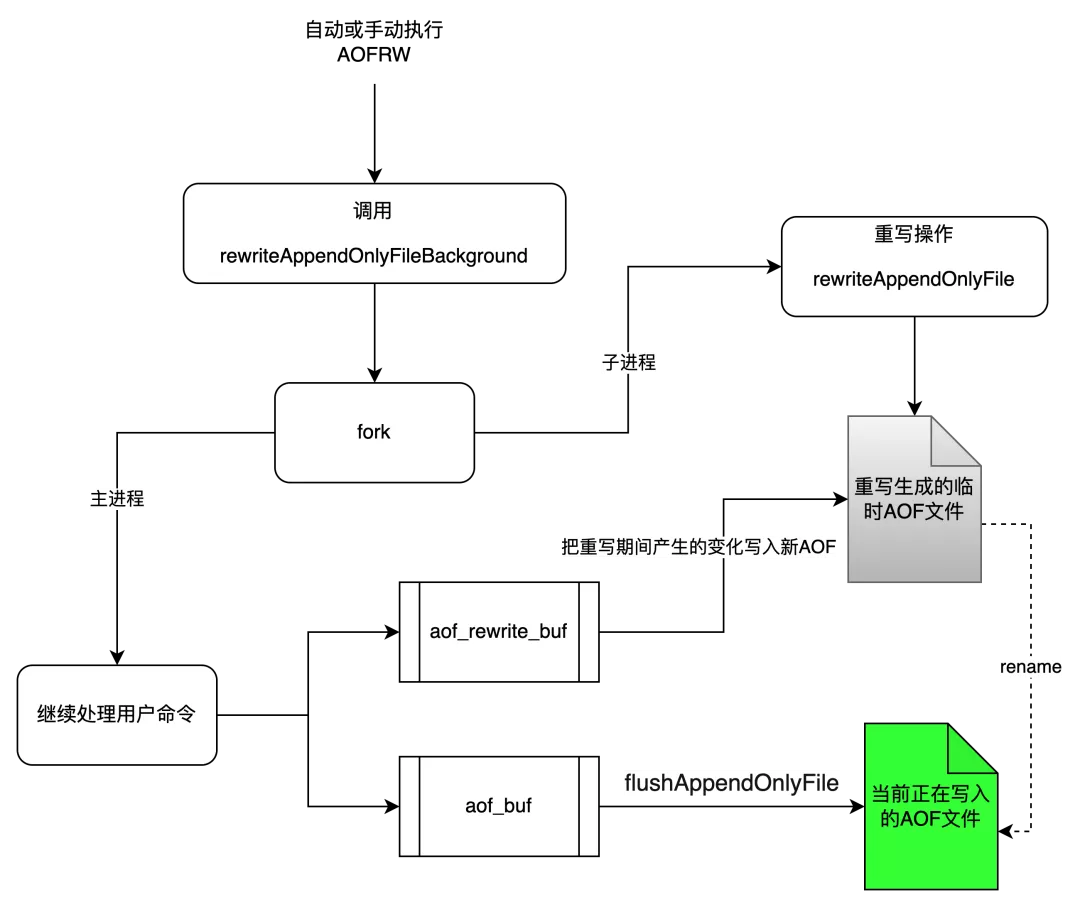 As you can see from Figure 1, during AOFRW, the main process writes the data changes after fork into aof_rewrite_buf. The vast majority of the contents of aof_rewrite_buf and aof_buf are duplicated, so this introduces additional memory redundancy overhead.

When the memory size occupied by aof_rewrite_buf exceeds a certain threshold, we will see the following message in the Redis log. As you can see, aof_rewrite_buf is taking up 100MB of memory space and 2135MB of data is being transferred between the main process and the child process (the child process also has internal memory overhead for reading the buffer when it reads this data via pipe).

This is a significant amount of overhead for Redis, an in-memory database.

When the memory size occupied by aof_rewrite_buf exceeds a certain threshold, we will see the following message in the Redis log. As you can see, aof_rewrite_buf is taking up 100MB of memory space and 2135MB of data is being transferred between the main process and the child process (the child process also has internal memory overhead for reading the buffer when it reads this data via pipe).

This is a significant amount of overhead for Redis, an in-memory database.

The memory overhead from AOFRW can cause Redis memory to suddenly reach the maxmemory limit, which can affect normal command writes and even trigger the OS limit to be killed by the OOM Killer, making Redis unserviceable.

There are three main areas of CPU overhead, each explained as follows.

The CPU overhead from AOFRW may cause Redis to experience jitter on RT when executing commands, or even cause client timeouts.

As mentioned earlier, during AOFRW, the master process writes a copy of the executed write command to aof_buf in addition to a copy to aof_rewrite_buf. The data in aof_buf is eventually written to the old AOF file currently in use, generating disk IO. at the same time, the data in aof_rewrite_buf is also written to the Therefore, the same data will generate disk IO twice.

Redis uses the six pipes shown below for data transfer and control interactions between the master and child processes, which makes the entire AOFRW logic more complex and difficult to understand.

As the name implies, MP-AOF is to split the original single AOF file into multiple AOF files. In MP-AOF, we divide AOF into three types, which are. 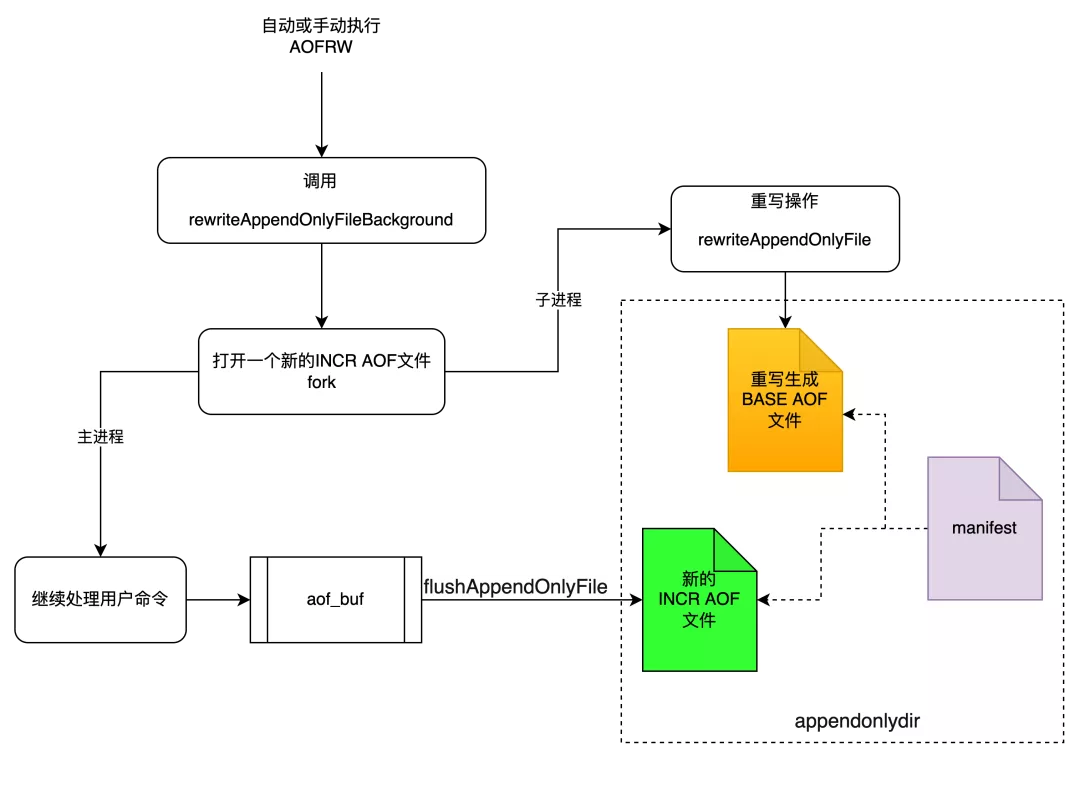 MP-AOF strongly depends on the manifest file. The manifest is represented in memory as the following structure, where

To facilitate atomic modification and rollback operations, we use a pointer reference to aofManifest in the redisServer structure.

A manifest is essentially a text file containing multiple lines of records, each line of which corresponds to an AOF file of information that is presented in key/value pairs for Redis processing, easy reading and modification. The following is a possible manifest file content.

The Manifest format itself needs to be extensible to add or support other features in the future. For example, it can easily support new key/value and annotations (similar to the annotations in AOF), which can ensure better forward compatibility.

Before MP-AOF, the AOF file name was the value set by the appendfilename parameter (default is appendonly.aof).

In MP-AOF, we use basename.suffix to name multiple AOF files. Where the appendfilename configuration content will be used as the basename part and the suffix will consist of three parts in the format seq.type.format , where.

Therefore, when using the appendfilename default configuration, the possible naming of the BASE, INCR and manifest files are as follows.

is compatible with old version upgrades

Since MP-AOF is strongly dependent on the manifest file, Redis will load the corresponding AOF file strictly according to the manifest instructions when it starts. However, when upgrading from an older version of Redis (meaning versions prior to Redis 7.0) to Redis 7.0, since there is no manifest file at this time, the ability for Redis to correctly recognize that this is an upgrade process and to load the old AOF correctly and safely is a capability that must be supported.

The ability to recognize this is the first part of this important process, and before we actually load the AOF file, we check to see if an AOF file named server.aof_filename exists in the Redis working directory. If it exists, then we are probably performing an upgrade from an older version of Redis. Next, we proceed to determine that we consider this to be an upgrade launch when one of the following three conditions is met.

Once this is recognized as an upgrade launch, we will use the aofUpgradePrepare function to do the pre-upgrade preparation.

The upgrade preparation is divided into three main parts.

The upgrade preparation operation is Crash Safe, and a Crash in any of the above three steps will allow us to correctly identify and retry the entire upgrade operation in the next boot.

Next, loadAppendOnlyFiles will load BASE AOF and INCR AOF in order according to aofManifest. stopLoading will be used to end the loading state after all AOF files are currently loaded.

When the child process completes the rewrite operation, it creates a temporary AOF file called temp-rewriteaof-bg-pid.aof, which is still not visible to Redis because it has not yet been added to the manifest file. To make it visible to Redis and load it correctly when Redis starts, we need to rename it and add its information to the manifest file according to the naming convention mentioned earlier.

Although AOF file rename and manifest file modification are two separate operations, we must ensure atomicity in both operations so that Redis can load the corresponding AOF correctly at startup. MP-AOF uses two designs to solve this problem.

For the sake of illustration, let’s assume that before AOFRW starts, the contents of the manifest file are as follows.

The content of the manifest file after the execution of AOFRW starts is as follows.

After the subprocess rewrite is finished, in the main process, we will rename temp-rewriteaof-bg-pid.aof to appendonly.aof.2.base.rdb and add it to the manifest, and will mark the previous BASE and INCR AOF as HISTORY. at this point the manifest file will look like this.

At this point, the results of this AOFRW are visible to Redis, and the HISTORY AOF is cleaned up asynchronously by Redis.

The backgroundRewriteDoneHandler function implements the above logic in seven steps.

By default, Redis cannot load such incomplete AOFs, but Redis supports the AOF truncate feature (turned on via the aof-load- truncated configuration). The principle is to use server.aof_current_size to track the last correct file offset of the AOF, and then use the ftruncate function to remove all file contents after that offset, which may lose some data, but ensures the integrity of the AOF.

Redis supports automatic execution of AOFRW when the AOF size exceeds a certain threshold. When a disk failure occurs or a code bug is triggered that causes AOFRW to fail, Redis will keep executing AOFRW repeatedly until it succeeds. Before MP-AOF, this didn’t seem like a big deal (at best, it consumed some CPU time and fork overhead). But in MP-AOF, because each AOFRW opens an INCR AOF, and only when the AOFRW succeeds will the previous INCR and BASE be converted to HISTORY and deleted. Therefore, successive AOFRW failures will inevitably lead to the problem of multiple INCR AOFs co-existing. In extreme cases, if AOFRW retries are frequent we will see hundreds or thousands of INCR AOF files.

For this reason, we have introduced the AOFRW flow limitation mechanism. That is, when AOFRW has failed three times in a row, the next AOFRW will be forcibly delayed by 1 minute, and if the next AOFRW still fails, it will be delayed by 2 minutes, and so on for 4, 8, 16… , the current maximum delay time is 1 hour.

During the AOFRW restriction period, we can still use the bgrewriteaof command to execute an AOFRW immediately.

The introduction of the AOFRW flow-limiting mechanism also effectively avoids the CPU and fork overhead associated with high-frequency retries in AOFRW. a lot of RT jitter in Redis is related to fork.

The introduction of the AOFRW flow-limiting mechanism also effectively avoids the CPU and fork overhead associated with high-frequency retries in AOFRW. a lot of RT jitter in Redis is related to fork.

The introduction of MP-AOF has successfully solved the memory and CPU overheads of AOFRW, which had a negative impact on Redis instances and even business access. At the same time, in the process of solving these problems, we encountered many unforeseen challenges, mainly from Redis’ large user base and diverse usage scenarios, so we had to consider the problems that users might encounter in using MP-AOF in various scenarios. Such as compatibility, ease of use, and minimizing intrusiveness into Redis code. This is a top priority for the Redis community in terms of feature evolution.

At the same time, the introduction of MP-AOF has brought more imagination to data persistence in Redis. For example, when aof-use-rdb-preamble is enabled, BASE AOF is essentially an RDB file, so we don’t need to perform a separate BGSAVE operation when performing a full backup. MP-AOF supports the ability to turn off automatic cleanup of the HISTORY AOF, so those historical AOFs have a chance to be preserved, and Redis now supports adding timestamp annotations to the AOF, so we can even implement a simple PITR capability based on this (point-in-time recovery). point-in-time recovery).

The design prototype of MP-AOF comes from the binlog implementation of Tair for redis Enterprise Edition, which is a set of core features proven on AliCloud Tair service. Today we are contributing this core capability to the Redis community, hoping that community users can also enjoy these enterprise-class features and create their own business code through better optimization with these enterprise-class features. For more details on MP-AOF, please move to the related PR ([#9788]), where more original designs and full code are available.