This article is based on reading the source code of Kubernetes v1.19.0-rc.3

Kubelet, one of the four components of Kubernetes, maintains the entire lifecycle of a pod and is the last link in the pod creation process of Kubernetes. This article will introduce how Kubelet creates pods.

First look at a diagram of the Kubelet’s component architecture, as follows. 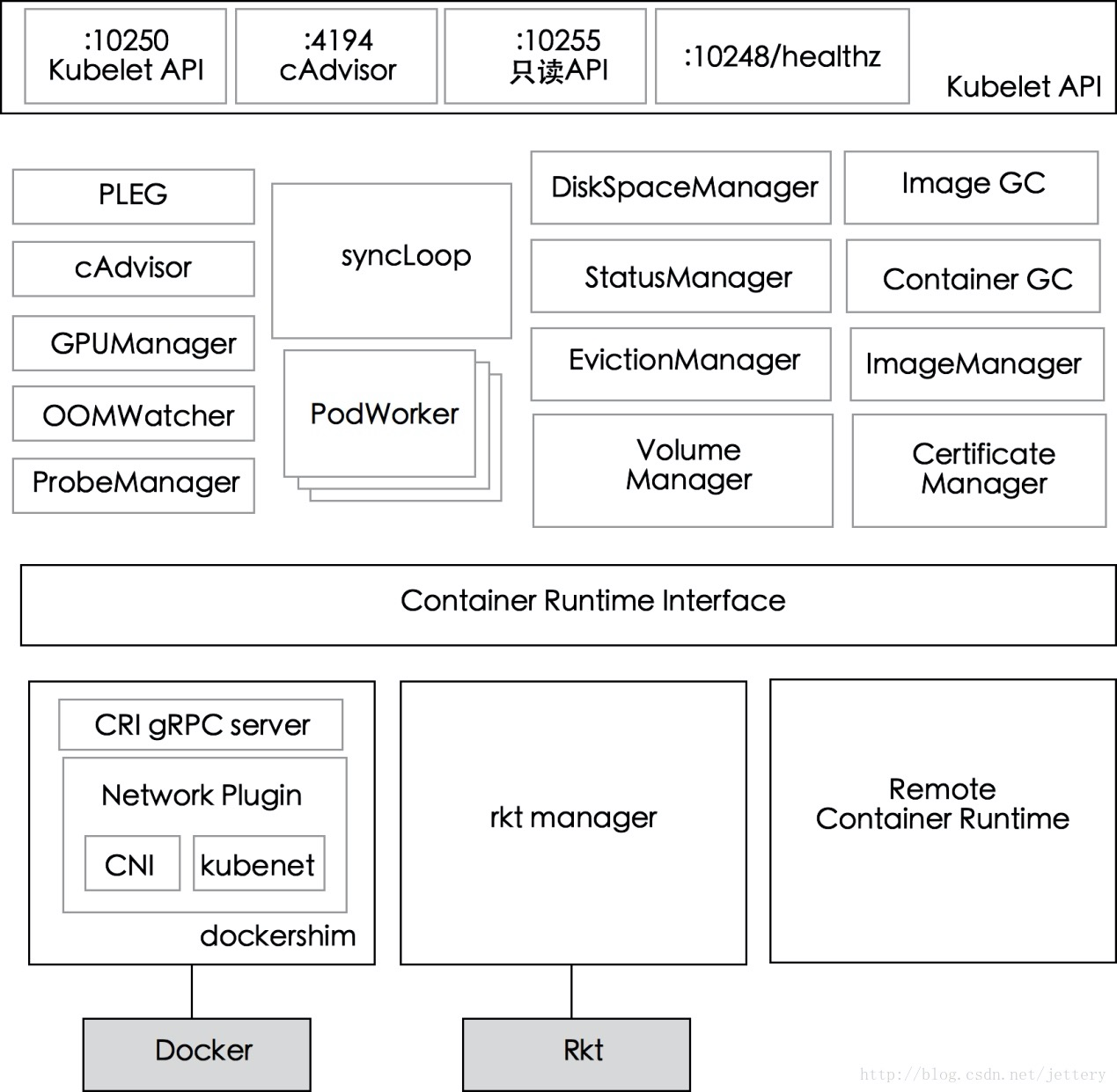 It can be seen that Kubelet is mainly divided into three layers: API layer, syncLoop layer, CRI and the following; API layer is well understood, that is, the part that provides the interface to the outside; syncLoop layer is the core working layer of Kubelet, the main work of Kubelet is centered around this syncLoop, that is, the control loop, run by producers and consumers; CRI provides the interface of container and mirror services, the container can be accessed as a CRI plugin when running. The CRI provides an interface to the container and mirror services, which can be accessed as a CRI plug-in when the container is running.

Let’s take a look at some important components of the syncLoop layer.

As mentioned above, Kubelet works mainly around a SyncLoop. With the help of a go channel, each component listens to the loop to consume events or produce pod-related events into it, and the whole control loop runs event-driven. This can be represented by the following diagram. 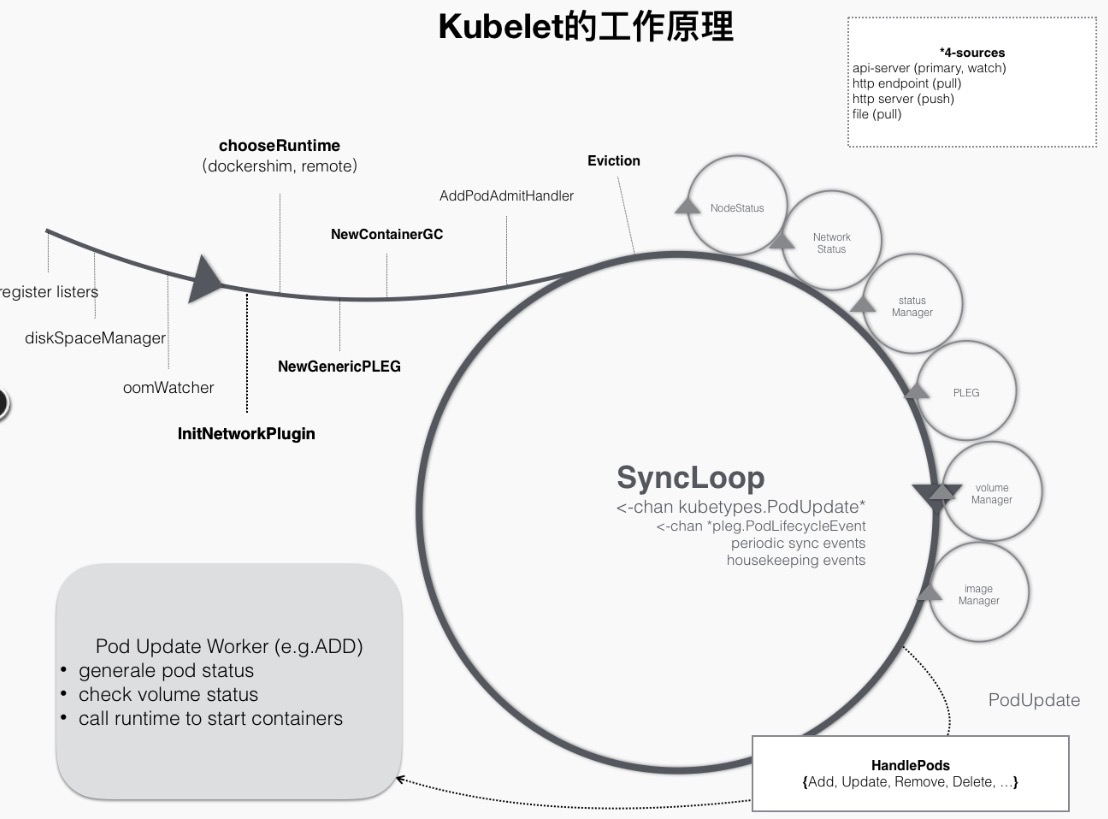 For example, during the pod creation process, when a pod is dispatched to a node, it triggers a handler registered by Kubelet in the loop control, such as the HandlePods section in the figure above. At this point, Kubelet checks the state of the pod in Kubelet memory, determines that it is the pod that needs to be created, and triggers the logic corresponding to the ADD event in the Handler.

The process of creating a pod

Kubelet pod creation process is triggered by ADD event in configCh, so here is the main flow of Kubelet after receiving ADD event.

When an ADD event occurs in configCh, the loop will trigger the HandlePodAdditions method of SyncHandler. The flow of this method can be described by the following flowchart.

First of all, the handler will sort all the pod installation creation time, and then process them one by one.

The next step is to determine whether the pod can run on the node, which is also known as pod access control in Kubelet. Access control mainly includes these aspects:

When all conditions are met, the podWorker is finally triggered to synchronize the pod.

The code corresponding to HandlePodAdditions is as follows.

Next, let’s see what podWorker does. podWorker maintains a map called podUpdates, with pod uid as the key, and a channel for each pod; when a pod has an event, it first gets the corresponding channel from this map, then starts a goroutine to listen to this channel, and executes managePodLoop. On the other hand, podWorker passes the pods that need to be synchronized into this channel.

After receiving the event, managePodLoop will first get the latest status of the pod from the pod cache to ensure that the pod currently being processed is up-to-date; then it will call the syncPod method to record the synchronized result in the workQueue and wait for the next scheduled synchronization task.

The whole process is shown in the following figure. 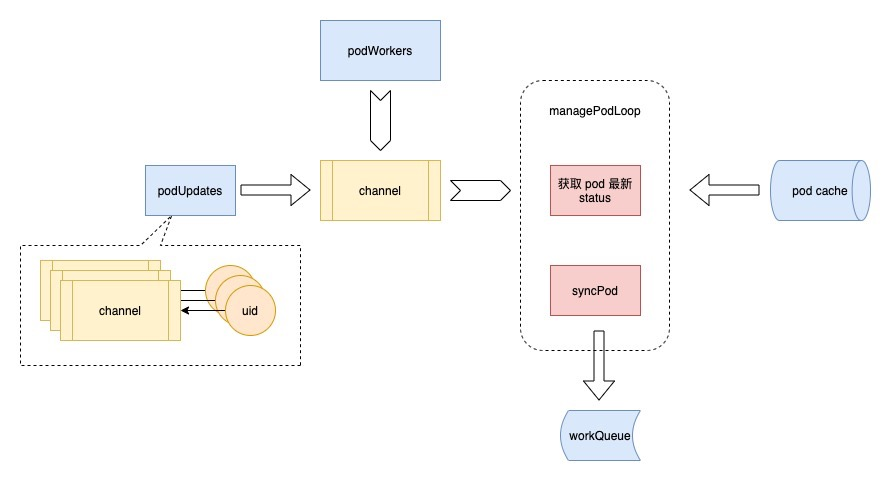 The code in podWorker that handles pod events.

This method is the one that actually interacts with the container runtime layer. First, it determines if it is a kill event, if so, it directly calls the runtime’s killPod; then it determines if it can run on the node, which is the Kubelet access control mentioned above; then it determines if the CNI plugin is ready, if not, it only creates and updates the Then determine whether the pod is a static pod, and if so, create the corresponding mirror pod; then create the directory where the pod needs to be mounted; and finally call syncPod of runtime.

The whole process is shown as follows.

The syncPod code for Kubelet is as follows. To understand the main flow, I removed some of the optimization code, so you can check the source code yourself if you are interested.

The whole process of creating a pod comes to the syncPod part of the runtime layer, so here’s a look at the process here.

The process is very clear, first calculate the pod sandbox and container changes, if the sandbox has changed, the pod will kill off, and then kill its related containers; then create a sandbox for the pod (whether it is a pod that needs to be newly created or a pod whose sandbox has changed and been deleted); later is to start the ephemeral container, init container and business container.

Among them, the ephemeral container is a new feature of k8s v1.16, which runs temporarily in an existing pod in order to complete user-initiated operations, such as troubleshooting.

The entire code is as follows, and here again some optimization code has been removed to show the main flow.

Finally, let’s look at what sandboxes are. In the field of computer security, a sandbox is a mechanism for isolating a program to limit the privileges of untrustworthy processes. docker uses this technique in containers, creating a sandbox for each container, defining its cgroup and various namespace to isolate the container; each pod in k8s shares a sandbox for each pod in k8s, so all containers in the same pod can interoperate and be isolated from the outside world.

Let’s look at the process of creating a sandbox for a pod in Kubelet. First, define the pod’s DNS configuration, HostName, log path, and sandbox port, which are all shared by the containers in the pod; then define the linux configuration for the pod, including the father cgroup, IPC/Network/Pid namespace, sysctls, and Linux permissions; after everything is configured, then The whole process is as follows. 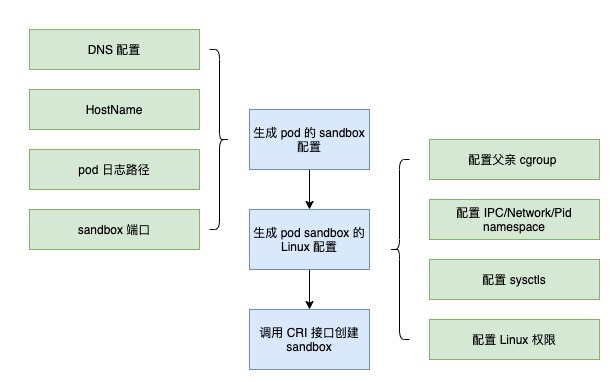 The core work of Kubelet revolves around the control loop, which uses go’s channel as a basis for the producer and consumer to work together to make the control loop work and achieve the desired state.