Kubernetes has a QoS type for each Pod, which is used to manage the quality of service for the Pod. There are three types, in decreasing order of priority.

Cgroups stands for Control Groups, a mechanism provided by the Linux kernel to limit, record, and isolate the physical resources (such as cpu, memory, i/o, etc.) used by process groups. 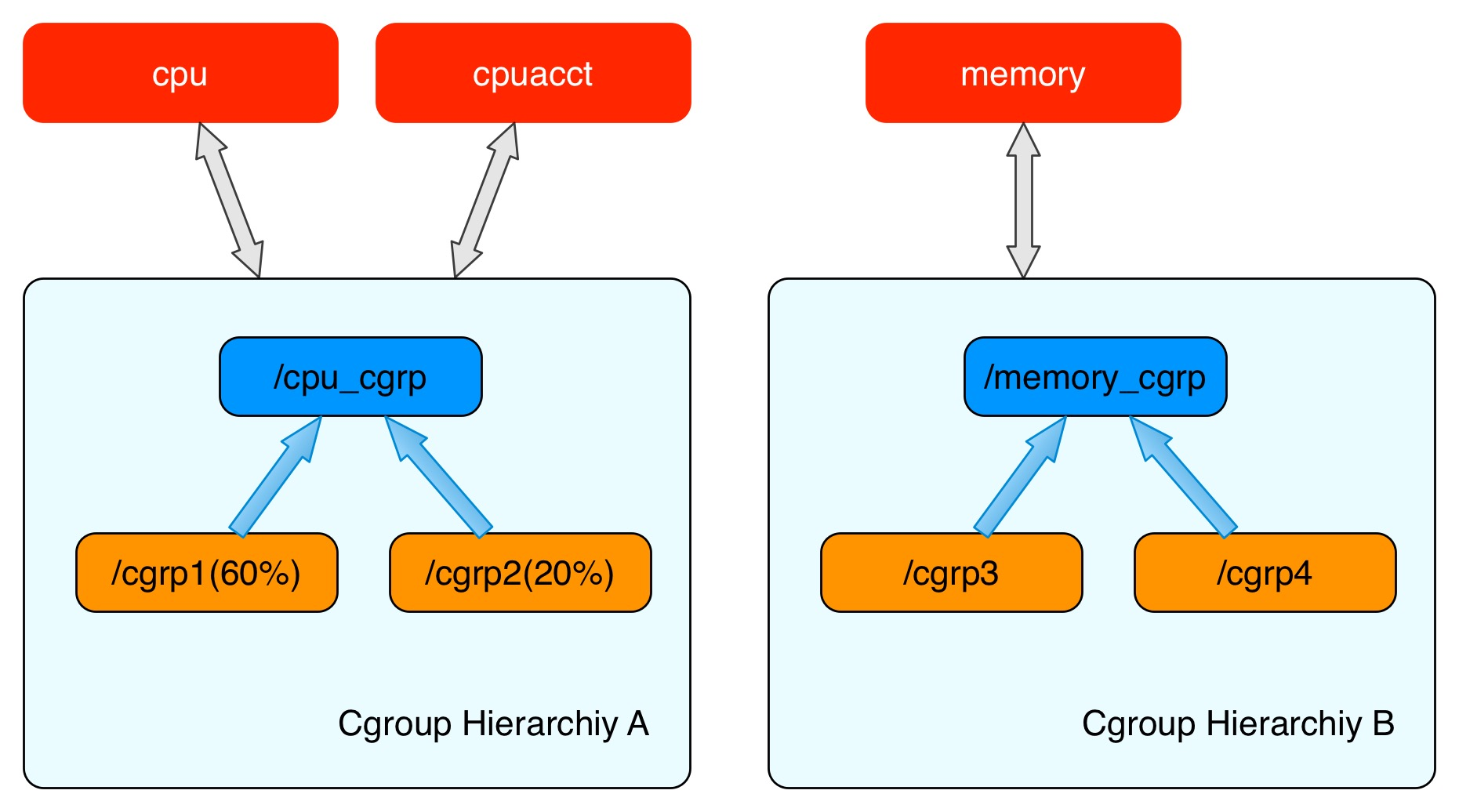 Where the cpu subsystem restricts process access to the CPU, each parameter exists independently in a pseudo-file in the cgroups virtual file system, and the parameters are explained as follows.

When kubelet starts, it resolves the root cgroups on the node and creates a sub-cgroups called kubepods under it. three levels of cgroups file tree are created under kubepods.

Before constructing the qosContainerManager, the root of the pod cgroup managed by the kubelet is assembled and passed into the constructor, <rootCgroup>/kubepods.

Once constructed, when the containerManager is started, it initializes and starts all the subcomponents, including the qosContainerManager, which is started by calling the setupNode function.

In the setupNode function, the createNodeAllocatableCgroups function is called to resolve the node’s root cgroups and then start the qosContainerManager.

Finally, let’s take a closer look at the createNodeAllocatableCgroups function and explore how kubelet resolves the root cgroups of nodes.

As you can see, the createNodeAllocatableCgroups function essentially sets the root group Cgroup based on the available cpu, memory, Pid, HugePageLimits, etc. of the node obtained from cm.internalCapacity, which sets the memory limit, cpu share, Pid limit, and hugePageLimit. cpu share, Pid limit and hugePageLimit. The name of the root group cgroup is the kubepods directory passed in before building the qosContainerManager.

The cm.internalCapacity is obtained from the CAdvisor when the containerManager is initialized; when the user uses the Node Allocatable feature, the node’s reserved resources are set according to the parameters filled in by the user.

After the root group cgroups are set, let’s take a look at the qosContainerManager startup function.

As shown in the figure below, the root group cgroups (path /kubepods) are first fetched, which is the result of the previous parsing step.

Finally, a concurrent program is started to execute the UpdateCgroups function at regular intervals to synchronize the corresponding cgroups according to the pods of each QoS type. 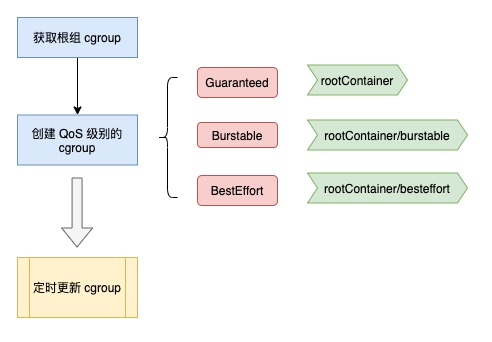 Look at the UpdateCgroups again.

Finally, the new data is updated to the QoS level cgroup data. The overall code is as follows.

In cgroupManager.Update(), runc is called to write cgroups based on all the cgroups calculated above, and the supported cgroupfs include MemoryGroup, CpuGroup, PidsGroup, all in package "github.com/ opencontainers/runc/libcontainer/cgroups/fs", and the source code is as follows.

Take cpuGroup as an example, it is essentially writing to cpu.shares, cpu.cfs_period_us, cpu.cfs_quota_us files. The source code is as follows.

Here’s a look at the process of creating a pod-level cgroup.

When creating a pod, the syncPod function will call the EnsureExists method inside the podContainerManagerImpl structure, which will check whether the pod already exists, and if not, it will call the ResourceConfigForPod function to calculate the resource of the pod and then create its corresponding cgroup. The source code is as follows.

Let’s look at how kubelet calculates the resource of a pod.

Finally, let’s take a look at the container-level cgroups.

When a container is created, it will first get its parent cgroup, i.e. pod-level cgroups, which will be stored in podSandboxConfig, and then generateContainerConfig will be called to generate container-level cgroup information. The source code is as follows.

Then look at the code to generate the containerConfig, in fact, this part is very simple, is generated from the container resources in the container of all the cgroup information, the source code is as follows.

After the containerConfig is generated, the CRI interface is called to create the container, which includes the creation of container-level cgroups.

As we all know, when a node runs out of memory, it will trigger the system’s OOM Killer, and the kubelet must ensure that pods of different QoS types are killed in a different order. Let’s take a look at how the kubelet guarantees the order in which pods are killed.

Linux has an OOM KILLER mechanism that enables its own algorithm to selectively kill some processes when the system runs out of memory. Some files related to system OOM are

/proc/<pid>/oom_score_adj: When calculating the final badness score, oom_score_adj is added to the result, so that the user can use this value to protect a process from being killed or to kill a process every time, from -1000 to 1000. If the value is set to -1000, the process will never be killed, because the badness score will always return 0.

/proc/<pid>/oom_adj: This parameter is there for compatibility with older versions of the kernel. It is set in the range -17 to 15.

The OOM killer mechanism decides which process to kill based on oom_score and oom_score_adj.

With the foundation of OOM Killer in place, let’s look at how kubelet sets up oom_score_adj for different kinds of processes. collected from the code as follows.

The pod pause container (defaultSandboxOOMAdj) and the Guaranteed type pod (guaranteedOOMScoreAdj) have oom_score_adj set to -998, indicating that they are also important, but can still be killed relative to the components above.

Finally, let’s look at the Burstable type of pod, which is calculated as.

It can be seen that a pod of Burstable type must score larger than Guaranteed and smaller than BestEffort, and the larger the request value of memory, the less likely it is to be killed.