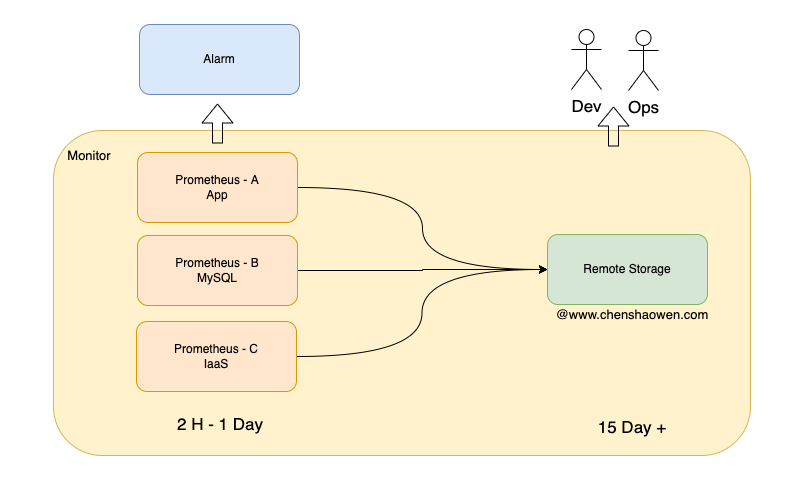 As shown above, two strategies are used when building a monitoring system:

The current situation is that there is no long- and short-term stratification of monitoring, and a common set of Prometheus. When querying long-period metrics, the memory and CPU usage of the server where Prometheus is located rises sharply, even causing monitoring and alerting services to be unavailable.

The reason is twofold:

The larger the range of queries, the more memory is needed. In another production scenario, we used VictoriaMetrics standalone as remote storage, deploying up to 128 GB of memory. Also, there was data loss in this approach.

The Prometheus Federation approach, on the other hand, only addresses the aggregation of multiple Prometheus, and does not provide the ability to sample and accelerate long-term metrics queries, which is not applicable to the current remote storage scenario.

Finally, seeing that the Thanos Compact component can compress and downsample metrics data, I decided to try using Thanos as the current remote storage for multiple Prometheus. 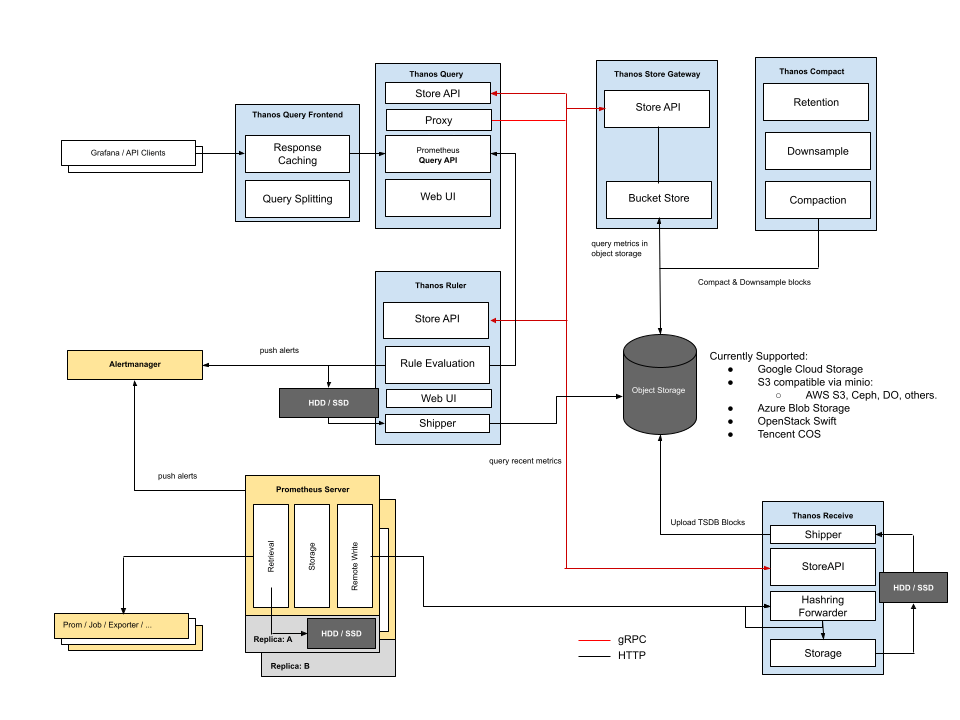 In Receive mode, you need to configure a remote write in each Prometheus instance to upload data to Thanos, where the real-time data is stored in the Thanos Receiver, so the Sidecar component is not needed to complete the query. 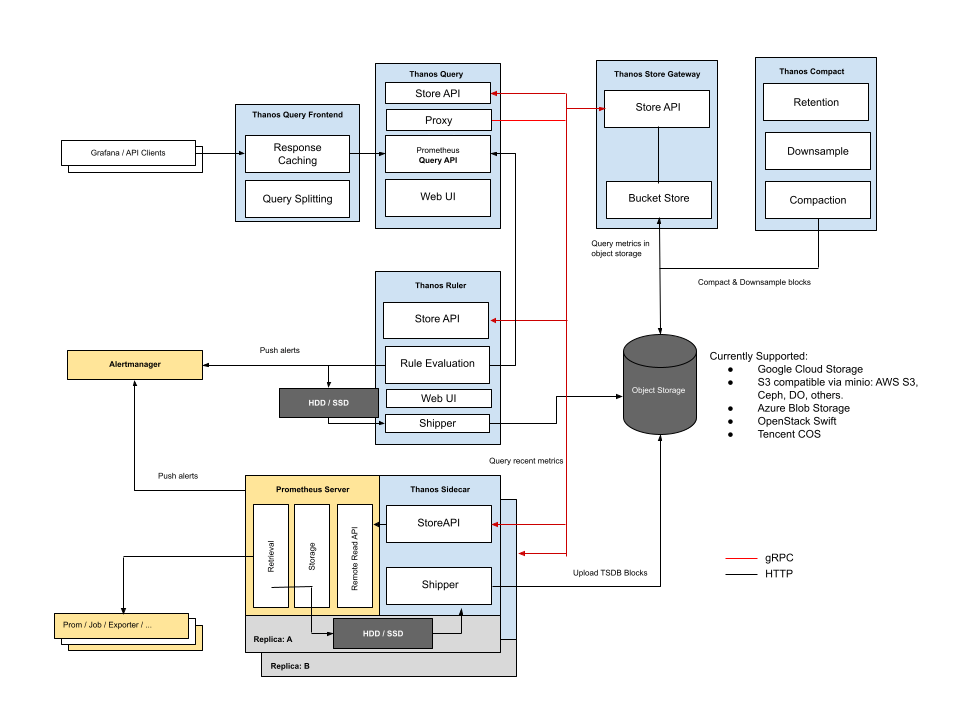 In Sidecar mode, a Thanos Sidecar component is added next to each Prometheus instance to enable management of Prometheus. There are two main functions.

Once the installation is complete, test the configuration according to the documentation to ensure that the Minio service works properly.

Currently Thanos requires that Prometheus version should preferably be no lower than v2.13.

thanos-query provides an http access portal on port 9090, so here the pages provided by the Query component are accessed through the host IP:32612 port. 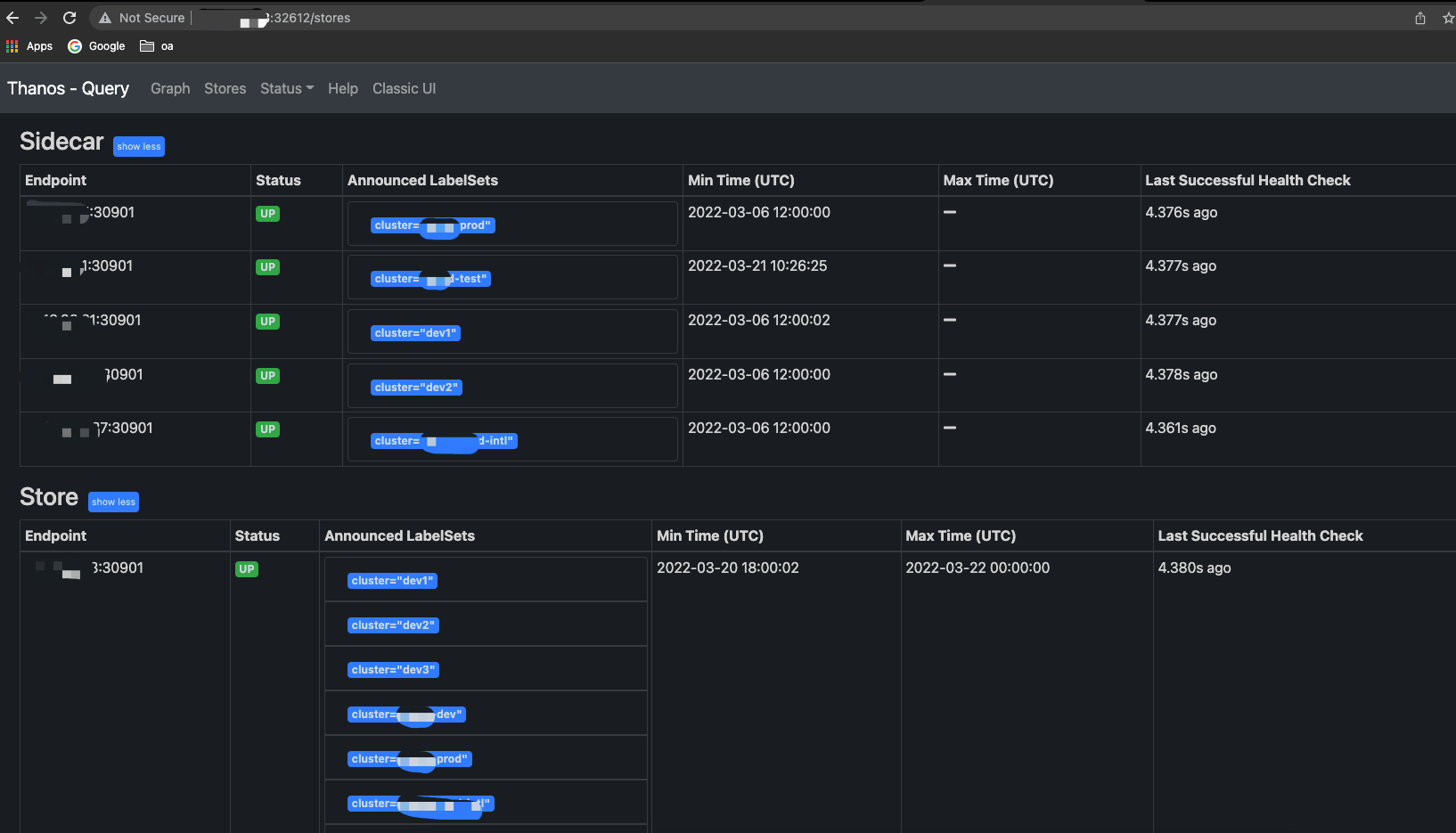 The administrator account is used directly here. For production, a separate account should be created for Thanos’ use of Minio.

By adding external_labels to Prometheus you can add an additional label to each Prometheus instance globally to uniquely mark an instance.

A tag named cluster=dev has been added here. All metrics reported by this Prometheus instance will carry this tag for easy querying and filtering.

Some deployments are done with Deployment and some are done with StatefulSet, both need to modify the Prometheus startup parameters

Rolling upgrades will encounter the following error, caused by the previous Prometheus Pod not releasing the file directory.

So you need to set the number of copies to 0 first, then set it to 1 and restart Prometheus.

Finally, you need to add the Grpc address of the Prometheus Sidecar above to the Thanos Store Gateway.

Here 0.0.0.0:30901 needs to be replaced with the Grpc access portal exposed by Prometheus Sidecar above. This way, when Thanos Query provides query capabilities, short-term data will call Grpc queries instead of querying data in the object store.

At this point, the Thanos Query page mentioned above and the new 0.0.0.0:30901 Endpoint record can be seen, and the status should be Up.

Adding a Thanos Query data source to Grafana is done in the same way as adding Prometheus. As shown in the following figure. 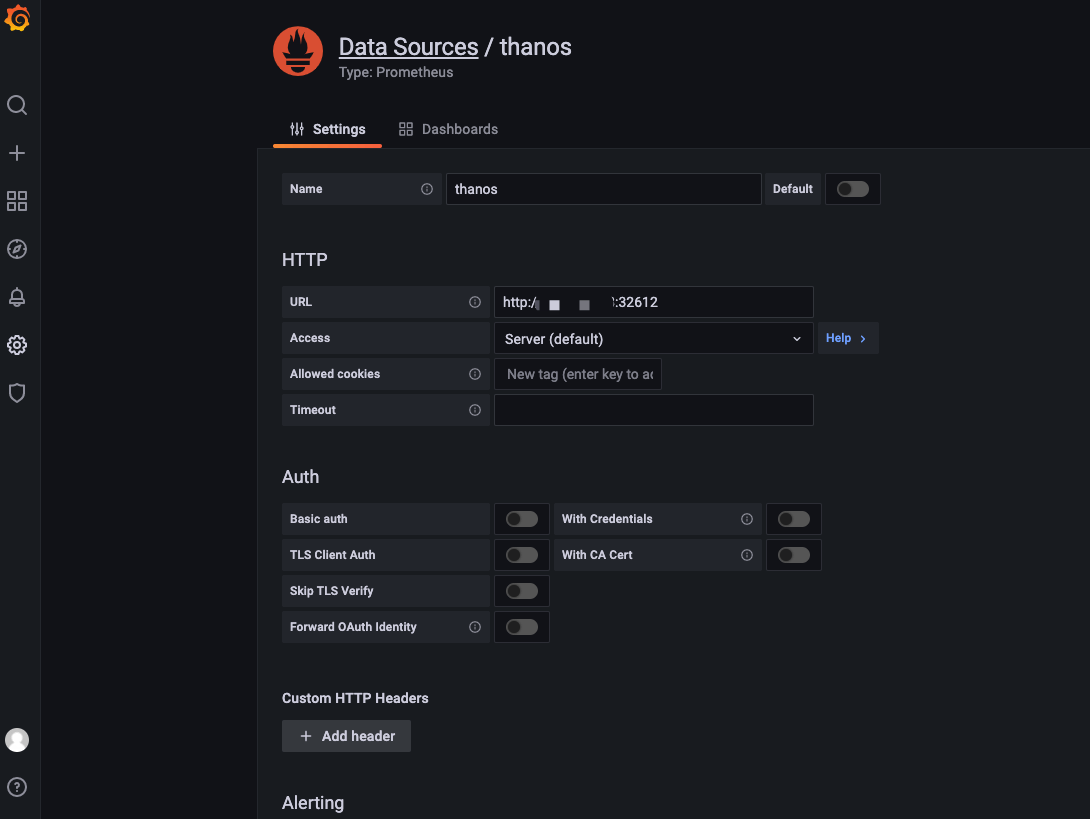 Here is a slight modification to the Kubernetes cluster-based view panel.

Above, I added a global external_labels to each Prometheus to distinguish between clusters by the cluster field. 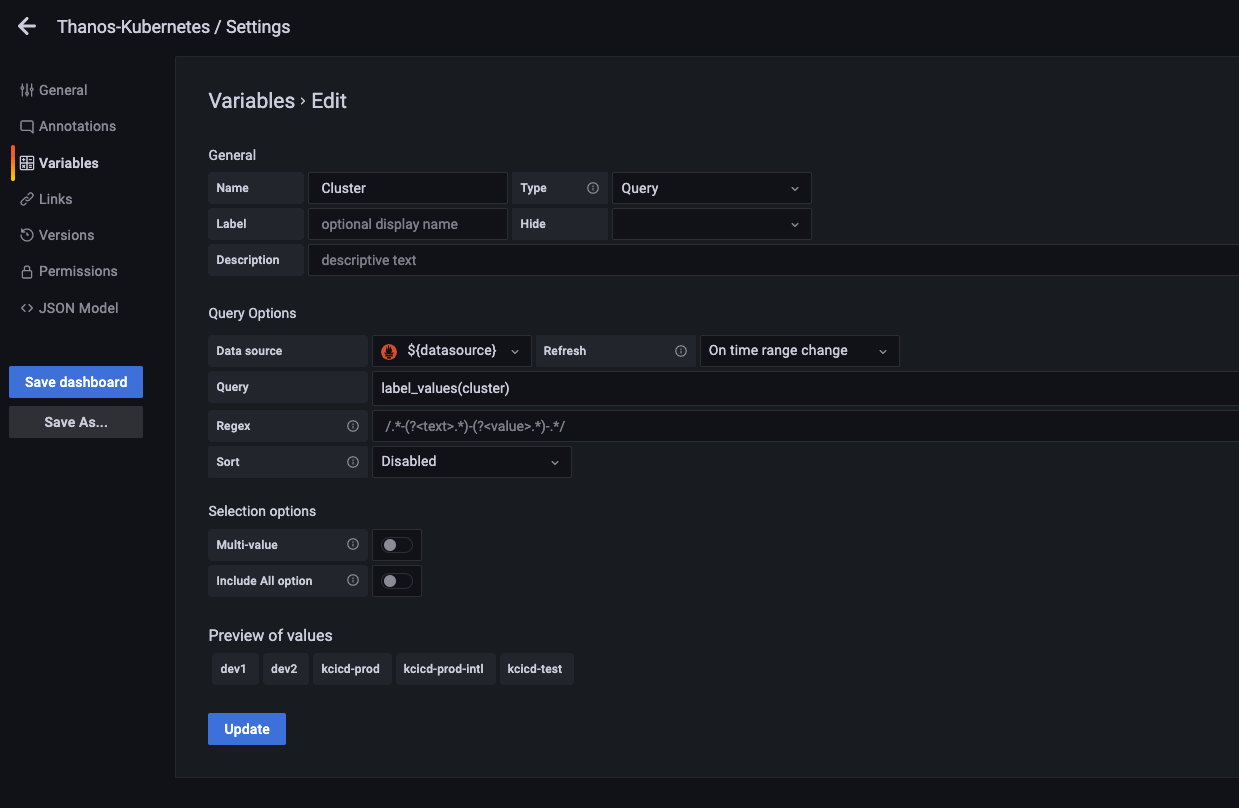 As shown above, add a Cluster variable to the panel and filter it using the cluster tag in the metrics. 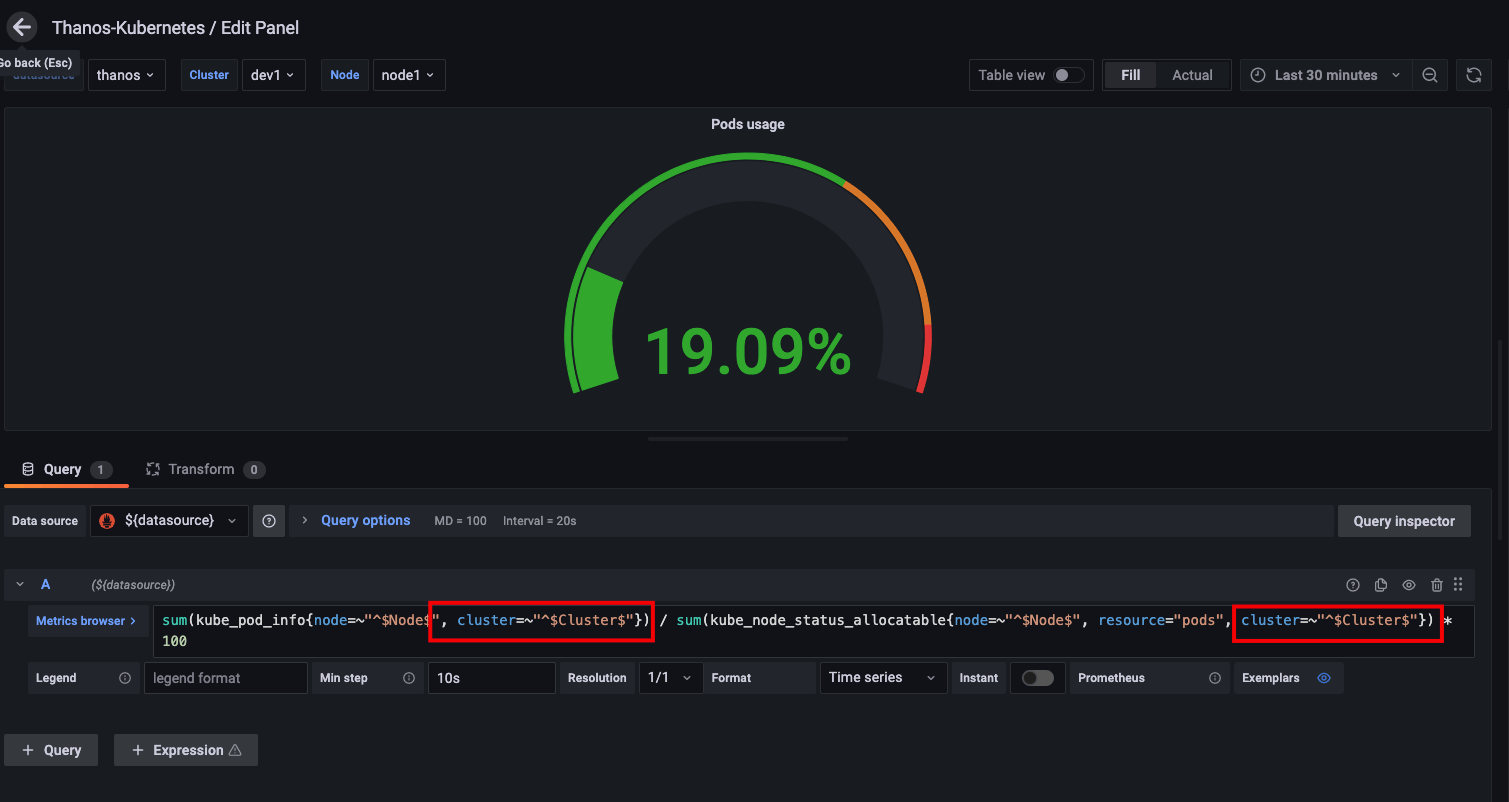 As shown above, you need to add an additional filter condition, cluster=~"^$Cluster$"}, to the expression of each view. Of course, you can also export the panel, make bulk changes in the editor, and then import it into Grafana.

Comparing the data from both panels, we can see that they show the same metrics. Therefore, we can use one Thanos data source instead of a scenario where multiple Prometheus data sources are managed decentralized.

Here the time scale of the data does not reach the parameter settings of the Thanos Compact component, so the effect of downsampling is not reflected.

This article is mainly about some ideas for monitoring data layer management.

The main reason for choosing Thanos is its downsampling; the Thanos compact component provides 5-minute and 1-hour downsampling, and with Prometheus sampling every 15s, the compression will be 20x and 240x, which can greatly relieve the pressure of long-period queries. In Sidecar mode, short-term data is queried through Grpc using Prometheus’ API.

Finally, of course, all 6 local clusters are connected to Thanos, and only after trying it out, we can really appreciate some of the details and processing logic. I’ve read a lot of architecture diagrams, documents and blogs, but it’s not as good as trying it out myself.