A new TCP reflection amplification attack technique launched using middleboxes was proposed by Kevin Bock et al. at the University of Maryland USENIX conference in August 2021: an attacker can exploit a vulnerability in TCP session identification in some network middleboxes to achieve a new DDoS reflection amplification attack. Unlike the TCP reflection launched using protocol stacks that could not amplify attack traffic that appeared in 2018, this new attack achieves the effect of TCP protocol-based traffic amplification, which makes the attack technique spread rapidly in the black market and proliferate across the network after its birth.

2. The Past Life of the Reflection Amplification Attack

Before explaining this new attack technique, it is necessary to first explain the reflection amplification attack. The so-called reflection amplification attack is a very common and popular DDoS attack technique, its basic principle is very simple: the attacker through the control of the botnet forged target IP to send requests to a specific public server, the public server will receive the request to send a larger reply message to the target, so as to achieve the attack traffic amplification. 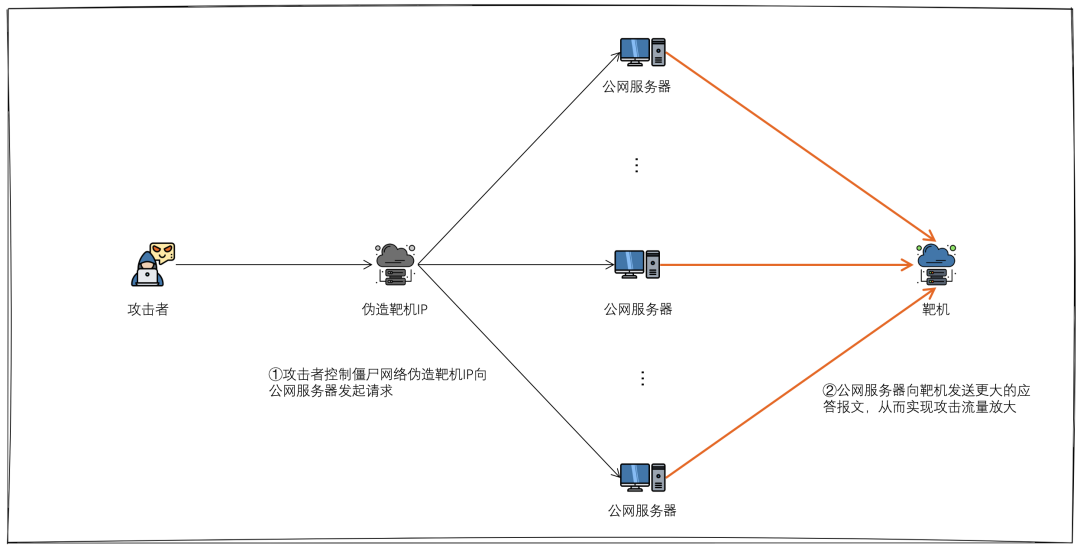 Is there a reflection attack using TCP protocol? The answer is yes. Compared to UDP reflection amplification attacks, such reflection attacks using the TCP protocol stack do not actually have a significant traffic amplification effect because the source IP of the request is forged and cannot complete three TCP handshakes with the TCP server to establish a connection, so it cannot get an answer message from the application layer. However, this attack uses the protocol stack characteristics of TCP, so that the target machine sees that the attack traffic has the protocol stack behavior, and the composition is complex (synack, ack, rst and other mixed traffic), resulting in reverse challenge, protocol stack behavior verification and other traditional TCP protection algorithms can not protect, greatly increasing the difficulty of protection, so the birth of this TCP reflection soon became the mainstream of DDoS attacks attack technique.

Weaponizing Middleboxes for TCP Reflected Amplification," published in USENIX Security 2021 by Kevin Bock et al. at the University of Maryland in August 2021 and awarded the Distinguished Paper Award, introduces a new TCP reflective amplification attack launched using middleboxes. attack technique using middleboxes. Unlike the TCP reflection attacks that emerged in 2018, which were limited by the TCP triple handshake mechanism, which made it difficult to achieve traffic amplification, this new attack technique exploits the vulnerability that some middleboxes do not or cannot strictly follow the TCP stack, and finely constructs a specific request that triggers the middlebox to return an intercept page, and since the intercept page is often larger than the request itself, it eventually achieves the attack traffic amplification.

The reason why middleboxes do not or cannot strictly follow the TCP stack is that many middleboxes in the existing network, such as firewalls, compliance systems, etc., take into account the network architecture, performance, stability and other factors are deployed in a bypass, one-sided traffic detection architecture, that is, these systems themselves can only see the incoming traffic data of the server room, and eventually these middleboxes can only determine whether there is a TCP connection based on one-way traffic. There are even middleboxes that do not determine whether there is a TCP connection, and directly parse the request content and issue an interception policy. Therefore, the process of the attacker launching this new TCP rejection attack is simply summarized in the following steps.

Note: Of course this attack technique is not effective against middleboxes that are based on bidirectional traffic identification and strictly follow the TCP protocol stack. 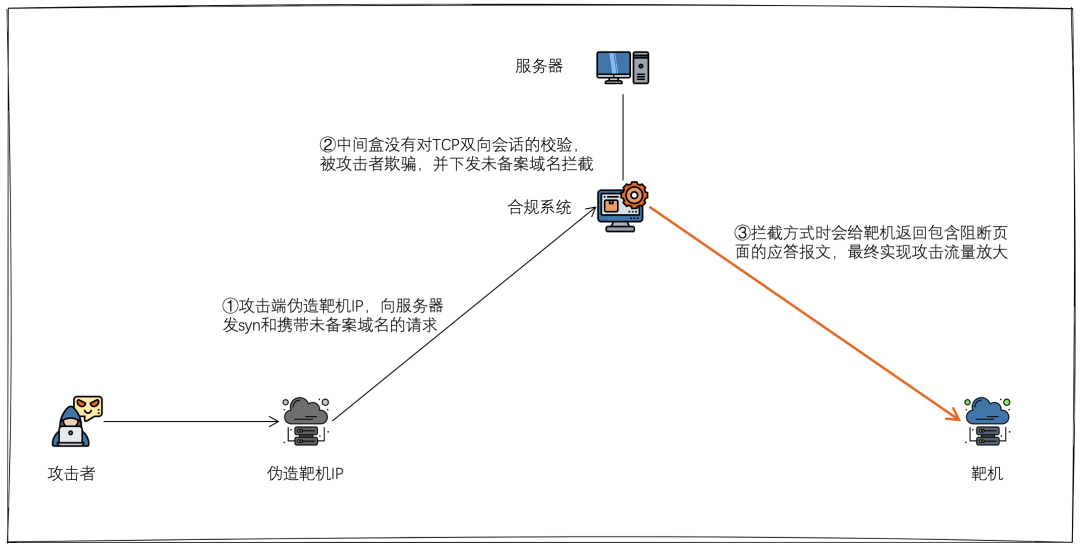 According to the idea of the attack, if the attacker wants to use this technique in practice, he needs to meet 3 key conditions: 1.

It is worth noting that a single message can trigger the interception of the scenario is generally the corresponding middlebox does not do any TCP handshake check, but based on a specific flag bit of the message directly extract the domain name and intercept, such middlebox is relatively small. The SYN;PUSH+ACK combination of request messages completely fakes the one-way TCP handshake and HTTP GET request scenario, which can deceive most middleboxes that can only see one-way traffic, so the success rate of triggering reflection amplification is higher.

After finding a way to trick the middlebox into misjudging that a TCP connection has been established, it is necessary to find domain names that are more likely to cause the middlebox to issue an intercept. The so-called Internet censorship is due to political, religious, moral, economic and other reasons, many countries around the world will conduct different levels of Internet traffic censorship and block domain names that do not comply with local laws and regulations and requests for blocking. In general, countries in East Asia, Southeast Asia, and the Middle East have stricter Internet audits, so to some extent the audit systems in these countries and regions are more easily exploited.

While the scope of the review varies by country region, so it is difficult to find a domain that is blocked by all audit middleboxes, Kevin Bock et al. performed a test analysis of public data published in the Quack tool to find five domains that trigger responses from most middleboxes that coincidentally span five different regions.

(3) Find the intermediate box with the largest possible amplification factor

In order to subject the target to a larger attack traffic, it is necessary to find an intermediate box with better amplification as a reflection amplifier, and the amplification factor is the main measure. 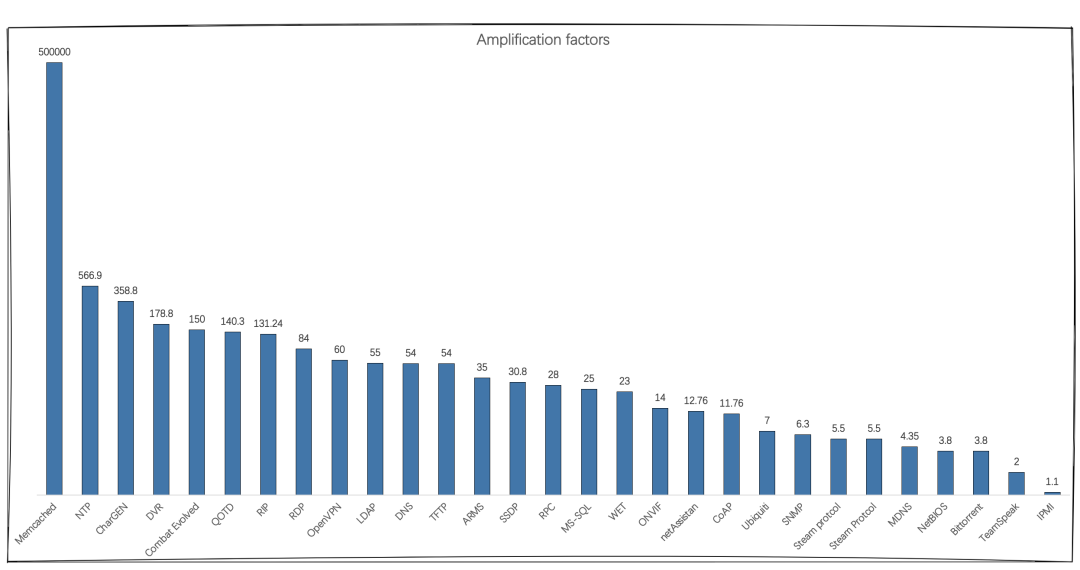 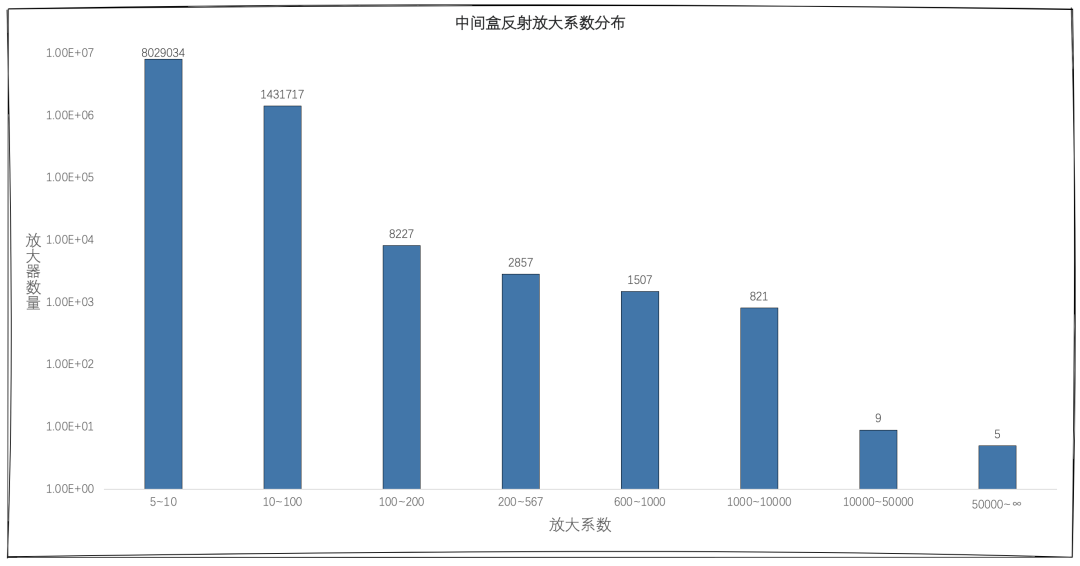 Then the question arises, it is reasonable to say that the middlebox answer the blocking packet may be larger than the request packet, but the size of the blocking page is after all limited, so the appearance of hundreds of thousands of amplification is understandable, why would there be tens of thousands of times, or even more than 50,000 times the amplification effect? And this is the super amplifier we will discuss next.

In order to understand superamplifiers, we need a systematic understanding of the main reflection scenarios.

This scenario where the server receives a request and answers directly, usually returning synack or rst, this reflection scenario is actually a TCP reflection using the server stack that emerged in 2018 and has no significant amplification effect.

This scenario is the most special, after the attack request arrives at the IDC room where the server is located, due to the routing loop makes the request loop between the two routers, eventually leading to the middle box received a large number of requests, and eventually to the target machine multiple answers to block the page. We know that there is a TTL field in the data message, each routing device will be reduced by one until it is reduced to 0 messages will not be discarded. The initial TTL of the attack request message is set to 255, which means that after the routing loop, the amplification factor will be increased by 200+ times than the original. (Figure below: Attack request loop causes the middlebox to receive a large number of duplicate requests)

Then this situation is not the worst, in some specific network environments, there will be TTL reset (for example, the network is running MPLS protocol and MPLS QOS is set, the MPLS QOS of some vendors’ devices will reset the TTL by default), after the loop the request packet will loop infinitely, and eventually the middlebox is forced to answer the blocked page at maximum capacity until the bandwidth of the egress where it is located is full. The above factors are the reason for the emergence of intermediate boxes with very large amplification factors, and these reflectors are also known as superamplifiers. Of course this loop or infinite loop situation will raise the alarm of IDC operations and security personnel, so the survival of super-reflectors is not stable. For example, after I found a super reflector in India, it was “deactivated” the next day and became a normal reflector.

In addition, there is a fifth reflection scenario mentioned by Kevin Bock et al. in “USENIX Security 2021”: the continuous reflection of the target machine and the middle box can also The ability to achieve infinite amplification, but because the author’s scan did not find this scenario, so this paper does not elaborate.

What we need is to be able to effectively defend against this attack and at the same time avoid becoming a reflection amplifier for the attacker.

4.1 How to protect against the new TCP backfire attack

If we are targeted by an attacker and become a target machine, then there are two keys to protect against this attack:

In terms of protection strategies: Since middlebox reply messages are actually not significantly different from normal HTTP reply messages in terms of Layer 4 traffic, it is actually more difficult to protect against such attacks, which can generally be protected by the following methods:

In terms of protection bandwidth: As this attack technique has a traffic amplification effect, the attack traffic is often very large and sufficient protection bandwidth is indispensable. So if the business is targeted by the attacker, when faced with such a large volume of DDoS attacks, very much to promote access to the cloud, through the cloud vendor’s massive amount of protection bandwidth for defense. For example, volcano engine DDoS high defense products rely on massive bandwidth reserve resources and high-quality BGP line type, can easily defend against high traffic DDoS attacks, see https://www.volcengine.com/product/AntiDDoS-pro for more information.

4.2 How to avoid becoming a reflection amplifier

If an enterprise’s middlebox (especially the compliance system) has TCP session identification vulnerabilities, and the compliance blocking page is too large, then it is very likely to be used as a “high-quality” reflection amplifier by external attackers, which will inevitably suffer frequent sweeping DDoS attacks, greatly wasting system performance, egress bandwidth The system performance, egress bandwidth and other valuable resources, and face the risk of complaints and even retaliation by the target machine. For this reason, optimizing the mechanism of middleboxes such as compliance systems to avoid being exploited will become an important security topic, for which we suggest that