For SRE team, it is critical to implement monitoring of large-scale GPU resources on AI and high performance computing platforms.SRE team can understand workload and other related performance through GPU metrics to optimize resource allocation, improve resource utilization and abnormality diagnosis to improve the overall performance of data center resources. In addition to SRE and infrastructure teams, whether you are a researcher working on GPU acceleration direction or a data center architect, you can understand GPU utilization and work saturation for capacity planning and task scheduling, etc. through relevant monitoring metrics.

With the containerization of AI/ML workloads and the adoption of Kubernetes solutions with dynamic scaling features for scheduling platforms, the urgency of monitoring for them is increasing. In this article, we will introduce NVIDIA Data Center GPU Manager (DCGM) and how it can be integrated into open source tools such as Prometheus and Grafana to enable a holistic solution for GPU monitoring in Kubernetes. 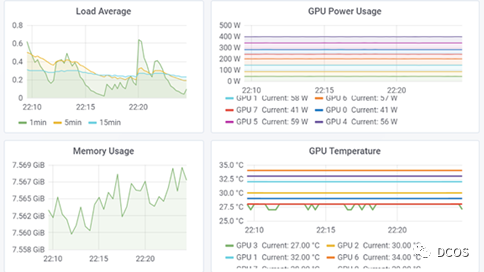 NVIDIA DCGM is an all-in-one tool for managing and monitoring large-scale clusters of NVIDIA GPUs on Linux-based systems. It is a low-overhead tool that provides a variety of capabilities including active health monitoring, diagnostics, system validation, policy, power and clock management, configuration management, and auditing.

DCGM provides APIs for collecting GPU telemetry. of particular interest are GPU utilization metrics, memory metrics, and traffic metrics. DCGM provides clients for various languages such as C and Python. for integration with the container ecosystem, a Go-bound implementation based on DCGM APIs is provided.

Monitoring systems typically consist of a metrics collector, a time series database for storing metrics, and visual components. An example is the CNCF graduation project Prometheus, which together with Grafana forms a monitoring integration solution. Prometheus, kube-state-metrics, and node_exporter are deployed together to capture cluster metrics and node metrics such as CPU utilization for Kubernetes API objects. The following figure shows an example architecture of Prometheus. 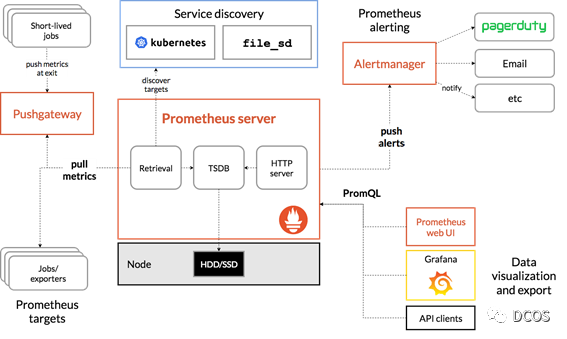 Building on the Go API described earlier, GPU metrics can be exposed to Prometheus via DCGM. NVIDIA has built the dcgm-exporter project for this purpose.

The dcgm-exporter uses Go bindings to collect GPU telemetry data from DCGM and then expose the metrics to Prometheus via the http interface (/metrics).

The dcgm-exporter can customize the GPU metrics collected by DCGM by using a configuration file in csv format.

The dcgm-exporter collects metrics for all available GPUs on a node. However, in Kubernetes, when a node requests GPU resources, it may not be possible to determine which GPUs will be assigned to pods. starting with v1.13, Kubelet adds a device monitoring feature that allows the pod-resources socket to know the devices assigned to pods, which includes the pod name, pod namespace, and device ID. 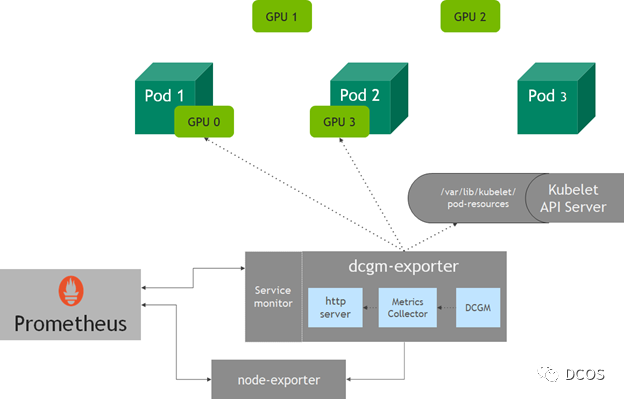 Here are some examples of setting up the dcgm-exporter. If using NVIDIA GPU Operator, then dcgm-exporter is also one of the deployment components.

When setting up the community-provided Helm chart for Prometheus Operator, Grafana must be exposed for external access, and prometheusSpec.serviceMonitorSelectorNilUsesHelmValues must be set to false.

In short, setting up monitoring consists of running the following command.

At this point, the cluster is configured as shown below, where all Prometheus pods and services are healthy and running.

Prometheus and Grafana services are exposed as follows.

Access the Grafana home page using the Grafana service exposed on port 32032. Login to the dashboard using the credentials set in the Prometheus chart: adminPassword field in prometheus.values. 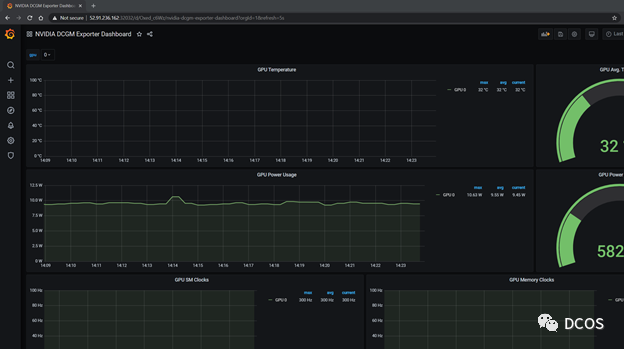 Now run some GPU workloads, for this purpose, the DCGM community provides a CUDA load generator called dcgmproftester, which can be used to generate deterministic CUDA workloads for reading and verifying GPU metrics.

To generate a Pod, you must first download DCGM and make an image of it. The following script creates a container that can be used to run dcgmproftester. This container can be found in the NVIDIA DockerHub repository.

Before deploying a container on a Kubernetes cluster, try running it directly using Docker. In this example, use Tensor Cores to trigger FP16 matrix multiplication by specifying -t 1004 and run the test at -d 45 (45 seconds). You can try to run other workloads by modifying the -t parameter.

Deploy it to a Kubernetes cluster and you can observe the corresponding metrics through the Grafana dashboard. The sample code is shown below.

The dcgmproftester pod can be seen running healthily and the metrics are subsequently displayed on the Grafana dashboard. GPU utilization (GrActive) has reached a peak utilization of 98% and other interesting metrics may be found, such as power or GPU memory. 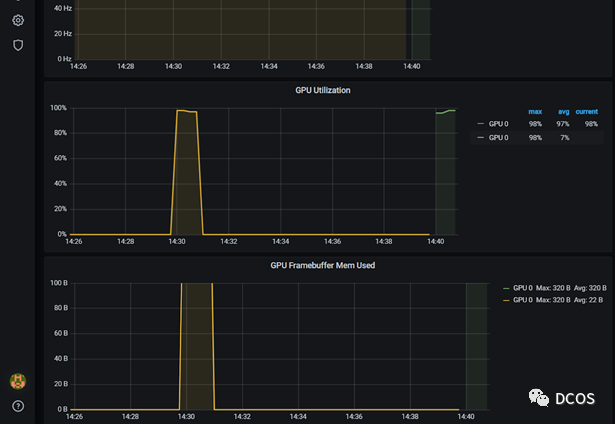 The following figure shows the monitoring metrics provided by dcgm-exporter as fetched by Prometheus. 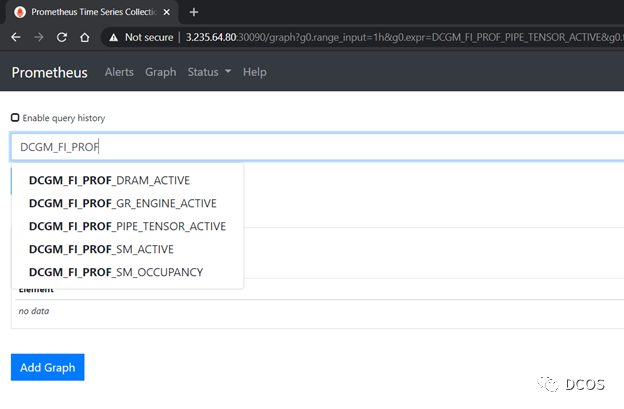 You can customize the Grafana dashboard to include additional metrics from DCGM. In this case, add Tensor Core utilization to the dashboard by editing the Grafana JSON file provided on the repo, or you can use Grafana’s web interface for editing.

The dashboard below includes Tensor Core utilization. After restarting the dcgmproftester container, you can see that Tensor Core on T4 has reached about 87% utilization. 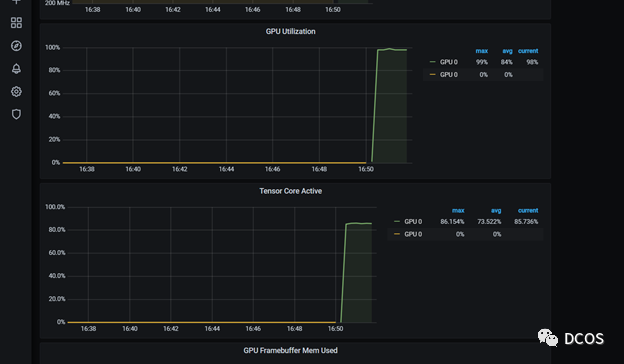 By using GPU metrics as custom metrics and Prometheus Adapter, you can use Horizontal Pod Autoscaler to scale the number of Pods based on GPU utilization or other metrics.