Let’s start by talking about reading and writing files, and what’s going on behind the scenes when we try to write a string of characters to a file, like the following lines of Python code.

With the strace command, it is easy to see which system calls are used behind this line of command.

The most critical of these is write, where the write system call writes “hello world” to the file descriptor with id 3.

Let’s put aside what’s going on behind these system calls and look at what happens when we read the file, e.g.

Similarly, let’s look at which system calls are used to read the file.

As you can see, the most important of these is the read system call, which reads the “hello world” string from a file descriptor of 3.

VFS and the File System

To understand what’s going on behind the scenes of system calls, we need to start with VFS.

VFS, known as Virtual File System, is an important interface and infrastructure for IO operations in Linux, and a streamlined Linux IO stack can be drawn to show where VFS is located. 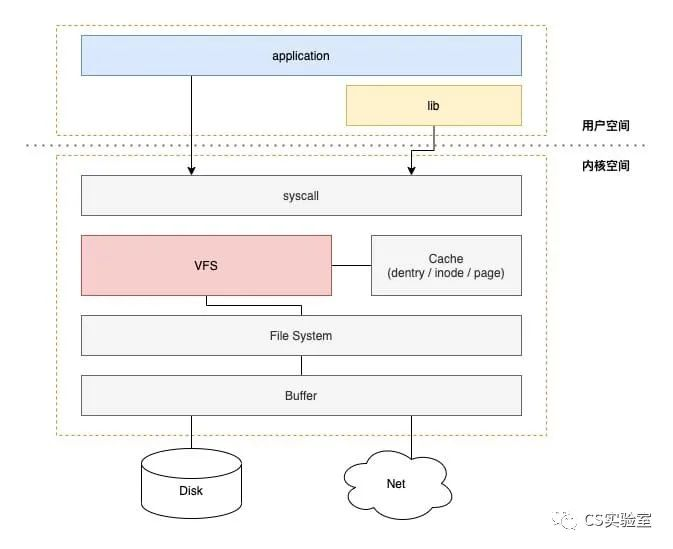 VFS itself can be understood as Linux’s interface to the file system conventions, and Linux uses object-oriented design ideas (and code structure) in order to implement this set of interfaces.

The code structure of a superblock is in linux/fs.h.

There are a bit too many fields, but I think they can be grouped into a few broad categories.

One of the very interesting things about the VFS code is the handling of the manipulation functions, and I was surprised to see that object-oriented programming can be done in C.

The operator functions of the superblock are in a separate structure.

The super_operations structure contains methods for operating on superblocks, which I think can be considered as a superblock-oriented Interface, since this structure does not have a concrete implementation, but rather function pointers that different file systems can implement to make superblocks available.

These functions are known by name, all without much explanation, and include the underlying operations of the file system and index nodes.

inode is the more common concept. inode contains all the information the kernel needs to manipulate a file or directory.

The structure of inode is also in linux/fs.h.

Like superblocks, inodes have inode_operations structures that contain operation methods.

The inode_operations structure contains the interface for file-related operations, including

As well, the inode_operations structure does not have a concrete implementation, but exists only as an interface through function pointers, and the specific operating system will implement the functions in the structure.

VFS treats a directory as a special kind of file, so for a file path, e.g. /dir1/file1, /, dri1 and file1 are all directory entries.

Each component of the above path, whether it is a directory or a file, is represented by a directory entry structure, which makes it easier to perform directory operations in VFS, such as pathname lookup.

The data structure of directory entries is in linux/dcache.h.

The cache of directory entries can be viewed via slabinfo.

The file structure is used to represent the files that have been opened by the process and is the data structure of the current file’s memory. This structure is created at the open system call and released at the close system call, and all operations on files revolve around this structure.

For a file structure, it is used to represent a file that has been opened, but it should be known that when a program opens a file, it gets a file descriptor, and there is still a difference between a file descriptor and a file, which will be mentioned later. As you can see, the file structure has a reference count field named f_count. When the reference count is cleared, the release method in the file operation structure is called, and what effect this method will have is determined by the implementation of the file system.

For the file operations structure, that is, file_operations, the names of the operations functions and system calls/library functions are basically the same, so we won’t go over them here.

The four structures and related operations of VFS are described above, but they only provide a set of interface definitions, or a standard for interfacing to a file system, a static concept.

But for users to be able to use and perceive a file system, they need to mount into the current directory tree, and they need to programmatically open the files in the file system. For these operations, some additional data structures are required.

The kernel also uses some data structures to manage the file system and related data, such as file_system_type to describe a particular file system type.

Every filesystem mounted to a system, before it is mounted, is just a file_system_type object, which contains the superblock mount and unmount methods to implement mount.

The mount operation not only completes the mount, but also creates a vfsmount structure to represent a mount point. The code for vfsmount is in linux/mount.h.

In the system, each process has its own set of “open files”, and each program has a different file descriptor and read/write offset for each file. Therefore, there are several other data structures related to it that are closely related to the VFS data structure mentioned above.

Here is files_struct, which is related to the file descriptor, and is confusingly similar to the file name mentioned earlier. The biggest difference between the two is that the latter is used to maintain all open files on the system, while the former maintains all files opened by the current process, and the former will eventually point to the latter. 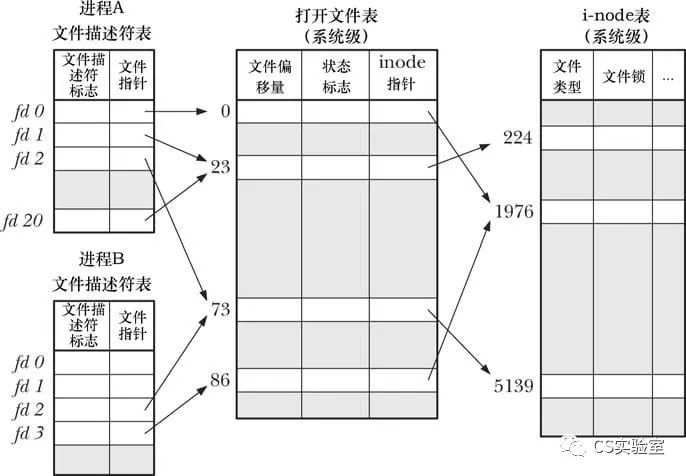 ext2 was once an excellent filesystem, the most widely used on Linux, and the successor to the original Linux filesystem ext. Although ext2 is no longer used, it is a good introduction to how file systems work because of the simplicity of its design.

As mentioned earlier, the ext2 filesystem consists of the following parts.

Superblock: A separate block immediately following the boot block that contains information about the parameters related to the file system, including

inode table: Each file or directory in the file system corresponds to a unique record in the inode table. This record registers various information about the file, such as

Data blocks: Most of the space in the file system is used to hold the data that makes up the files and directories that reside on top of the file system.

The ext2 file system stores files in blocks that are not necessarily contiguous or even sequential. To locate the file data blocks, the kernel maintains a set of pointers within the inode. 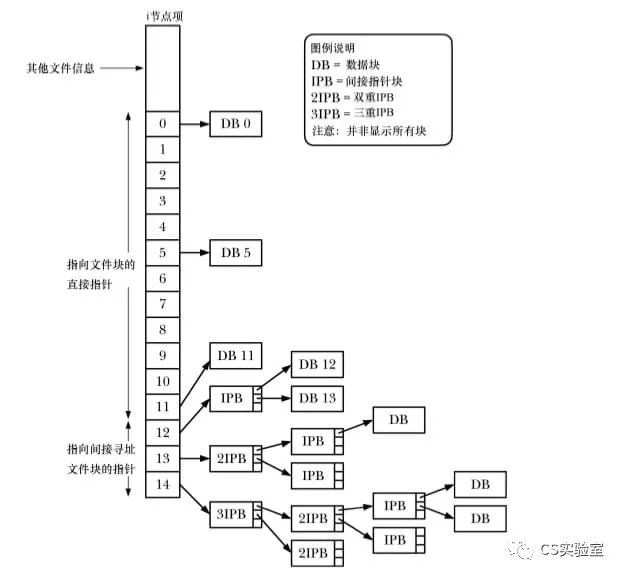 An inode structure contains 15 pointers (0-14), the first 11 of which are used to point to data blocks so that they can be referenced directly in small file scenarios, and the later pointers to indirect pointer blocks to point to subsequent data blocks.

The second example is a look at the common modern file system xfs, developed by Silicon Graphics for their IRIX operating system, which has a good performance for large file handling and transfer performance.

The point of this article is not to talk about how xfs works, but to look at xfs from a Linux perspective. xfs, unlike ext, is not designed for Linux, so it does not follow the VFS design for file system processing.

In VFS, file operations are divided into two layers: file (file read/write, etc.) and inode (file creation/deletion, etc.), whereas in xfs there is only one layer, vnode, which provides all operations. So during the porting of XFS to Linux, a conversion intermediate layer linvfs was introduced to adapt VFS, mapping operations on file and inode to vnode. This article has sorted out the core VFS data structures and the relationships between them, but understanding what VFS is useful for. I think it is useful in two ways.

The second is to help understand the IO cache in Linux. VFS is related to many caches, including page cache, directory cache, inode cache. 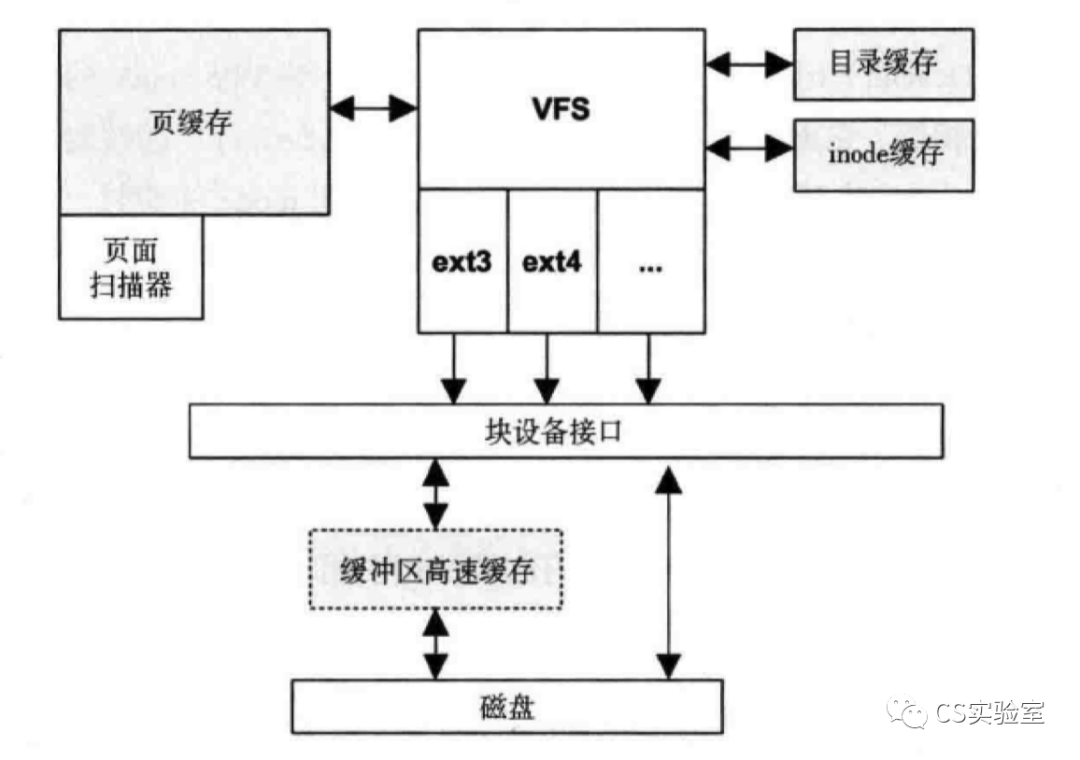 In addition to the inode and directory entry structure in memory, the page cache, for example, is used to cache the most recently read and written blocks of file data, where the file.address_space field is used to manage the page cache.