VXLAN is Virtual eXtensible Local Area Network, a virtual extensible local area network. It is an overlay technology that builds a virtual layer 2 network over a layer 3 network. rfc7348 (Ref. 1) describes it as follows.

A framework for overlaying virtualized layer 2 networks over lay 3 networks.

Every technology that comes out has a problem to solve, and VXLAN is no exception, so let’s take a look at what problems VXLAN is trying to solve.

Traditional Layer 2+3 networks have become overwhelmed with these requirements, and while many improved technologies such as stacking, SVF, TRILL, etc. can increase the scope of Layer 2 in an effort to improve the classic network, it is very difficult to make small changes to the network while ensuring high flexibility.

To solve these problems, many solutions have been proposed, and vxlan is one of them. vxlan was introduced by VMware, Cisco, and a number of other large companies, and the standard is currently documented in RFC7348.

Naturally, vxlan introduces some new concepts, so this section will talk about them. The following diagram shows the working model of vxlan, which is created on top of the original IP network (layer 3) and can be deployed on any network that is layer 3 reachable (capable of communicating with each other over IP). a vtep at each endpoint is responsible for the encapsulation and unencapsulation of vxlan protocol messages, i.e., the header of the vtep communication is encapsulated on the virtual message. Multiple vxlan networks can be created on the physical network, and these vxlan networks can be thought of as tunnels through which virtual machines from different nodes can be directly connected. Each vxlan network is identified by a unique VNI, and different vxlan’s can not affect each other. 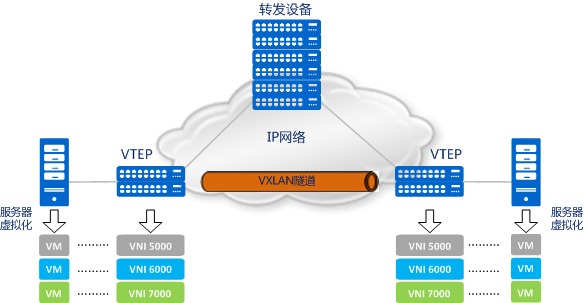 For now, these concepts are still very obscure and difficult to understand. We will explain the message and communication flow of a vxlan network below, so hopefully we can come back to these concepts after the article is over and understand what they mean.

As mentioned earlier, vxlan builds a virtual Layer 2 network out of a Layer 3 network, which is clearly reflected in the vxlan messages.

Three parts can be seen in this message.

The meaning of each part of the message is as follows.

It can be seen that the vxlan protocol has 50 bytes more content than the original message, which reduces the percentage of valid data transmitted over the network link. vxlan header is most important for the VNID field, and the other reserved fields are mainly for future expansion, currently left to different vendors to add their own functionality with these fields.

From the previous section, we have a general understanding of the process of sending vxlan messages. The virtual machine message is added to the vxlan and the external message layer via vtep and then sent out. The other vtep receives it, removes the vxlan header and then sends the original message to the destination virtual machine according to the VNI.

The above process is a process where both parties already know all the communication information, but there are still many issues to be resolved before the first communication.

These three questions can be boiled down to the same one: how do vxlan networks sense each other’s presence and choose the correct path to transmit messages?

And the first question is also a no-brainer, because the groups formed by vtep are fictitious concepts, and only some vtep can deliver messages correctly, and they are in the same group. In other words, we just need to answer the last two questions.

To answer these two questions, let’s go back to the vxlan protocol messages and see what information is needed for a complete vxlan message.

For each of these two approaches, we analyze them below.

The following figure shows the workflow of vxlan messages in multicast mode. Machine A on the bottom left wants to send messages to Machine B on the bottom right through the vxlan network. 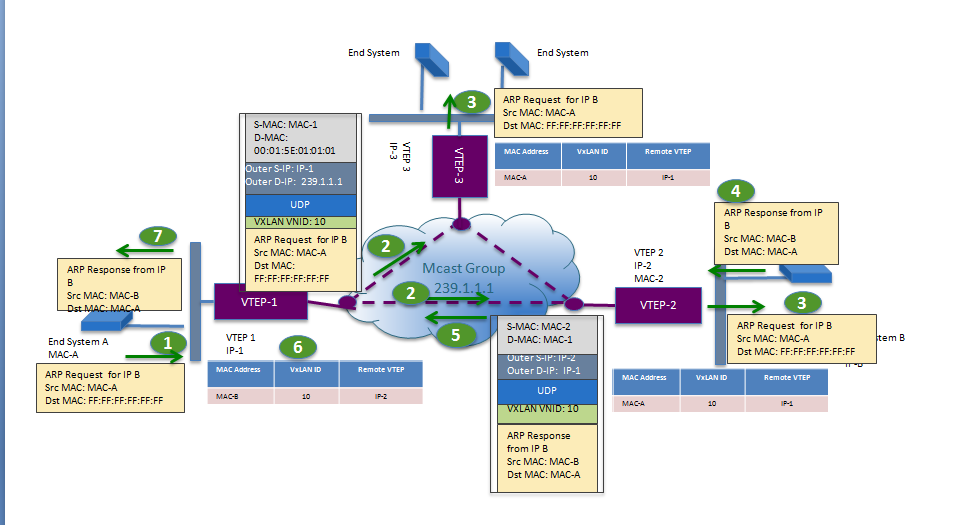 The process of sending unicast messages is the logic of the above reply message, which should also be very easy to understand. There is another way to communicate between different VNI networks, which requires a vxlan gateway (either a physical network device or software) that receives a vxlan network message and then decompresses it, adding another vxlan header to forward it out according to a specific logic.

Because not all network devices support multicast, and because of the message waste associated with multicast, this approach is rarely used in production.

From the flow of multicast, it can be seen that the most critical thing for vtep to send messages is actually to know the MAC address of the other VM and the vtep IP address of the host where the VM is located. If you can know these two pieces of information in advance and tell vtep directly, then there is no need for multicast.

In the VM and container scenario, we can know the IP and MAC of a VM or container when it starts up before it has communicated over the network (either by getting it in some way or by controlling the two addresses in advance), and the distributed control center keeps this information. In addition to this, the control center also keeps which vtep’s are available for each vxlan network and what the addresses of these vtep’s are. With this information, the vtep can look up and add headers directly when sending messages, without the need to multicast to ask all over the network.

Distributed control of vxlan is a typical SDN architecture, and is the most widely used approach today. Because it has a variety of implementations, and each implementation has some gaps, it is not convenient to come up with specific examples here to illustrate, as long as the above principles are understood, no matter what kind of implementation, you can quickly get started.

The vxlan protocol brings flexibility and scalability to virtual networks, allowing cloud computing networks to scale on demand and be flexibly distributed like compute and storage resources. As with all technologies in computing, this is a tradeoff, and the main problem with vxlan is its complexity and additional overhead compared to classic networks.

It is easy to see that each vxlan message has an additional 50 bytes of overhead, and when the vlan field is added, the overhead goes up to 54 bytes. This is a very expensive operation for small messages. Imagine if the application data for a message is only a few bytes, and the original network header plus the vxlan message header can have 100 bytes of control information.

Another disadvantage of vxlan is the complexity. While classic networks are stretched thin when dealing with cloud computing, the classic network model has been developed for a long time, and all the deployment, monitoring, and operations and maintenance are relatively mature. If you use a vxlan network, then all of this has to be relearned, and the time and labor costs are bound to be much higher.