Macvlan allows you to configure multiple virtual network interfaces on a single network interface of the host, these network interfaces have their own independent MAC addresses, or can be configured with IP addresses for communication. virtual machines or container networks under Macvlan are in the same network segment as the host and share the same broadcast domain. macvlan is more similar to Bridge, but because it eliminates the Bridge, it is simpler and more efficient to configure and debug. Macvlan is similar to Bridge, but it is easier and more efficient to configure and debug because it eliminates the presence of Bridge. In addition, Macvlan itself supports VLAN perfectly.

macvlan itself is a linxu kernel module whose function is to allow multiple MAC addresses to be configured on the same physical NIC, i.e. multiple interfaces, each of which can be configured with its own IP. macvlan is essentially a NIC virtualization technology (the biggest advantage is that it has excellent performance)

You can run lsmod | grep macvlan at the linux command line to see if the driver is currently loaded in the kernel; if not, you can load it by modprobe macvlan and check again. Kernel code path /drivers/net/macvlan.c

Tip: Bridge may encounter Layer 2 loops, and STP can be turned on to prevent loops if needed.

Virtual Ethernet Port Aggregator, all interface traffic needs to go to the external switch to reach other interfaces

The interface only accepts messages sent to its own MAC address. 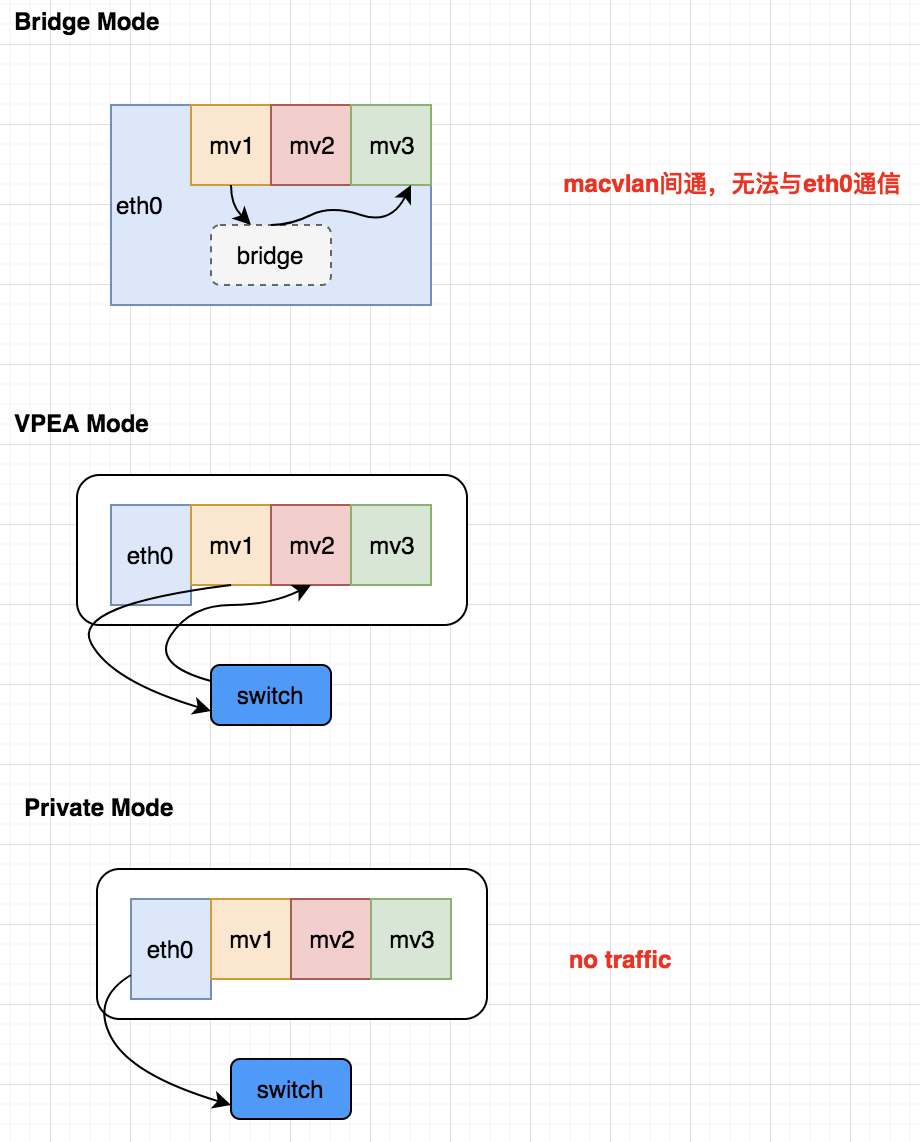 The following experiment creates two macvlan interfaces and puts them into two netns; then verifies that the clients interoperate between these two macvlan ports.

First, use bridge mode to create two macvlan interfaces, whose parent interfaces are both eth0.

Check the results of the creation and note that each interface has its own mac address.

Insert the macvlan interface into namespace

Check the status of your network card.

net1 and net2 can’t ping through the host, ping themselves also can’t. 2 containers ping each other without problems

found that macv1 can not ping the host interface eth0 address.

But it is possible to ping the macv2 address.