The implementation of this project is actually very simple.

However, note that the test does not collect metrics from the configured remote_write target, it only collects metrics from the internal components vmagent and vmalert, he will assume that the monitoring of the Prometheus storage system under test is done separately, for example, here we take a single node VictoriaMetrics as the target of remote_write, then we can monitor it ourselves.

We can control the stress test by configuring some of the following parameters.

A typical scenario is to run multiple VictoriaMetrics and then list their addresses in the remoteStorages section. The default configuration for this test is targetsCount=1000 and scrapeInterval=10s resulting in approximately 80k samples/second.

We can then compare resource usage, data compression, and overall performance with VictoriaMetrics’ official Grafana dasbhoards.

The project is installed by default via Helm Chart, which by default installs a single instance of VictoriaMetrics in single mode, directly Clone the project.

The project code now comes with a single-node VictoriaMetrics by default, but the Charts template does not have a Service object added to it, which is not very convenient to operate. Let’s add a chart/templates/vmsingle/service.yaml file with the following content.

After the configuration, execute the following command in the project root directory to start testing.

The above command will use Helm for installation.

One of the node-exporter applications contains two containers, one for the application itself and another for nginx wrapped with a layer to relieve the pressure on node-exporter. We can then configure Grafana to monitor the data source http://my-bench-prometheus-benchmark-vmsingle:8428 and import a few of the official Grafana Dashboards provided by VictorialMetrics: https://grafana.com/orgs/victoriametrics.

The graph below shows the monitoring chart for vmagent, from the chart you can see that the metrics target for the crawl is now 2000, which is consistent with the above configuration, and no one has any errors, proving that vmagent is still within the pressure range. 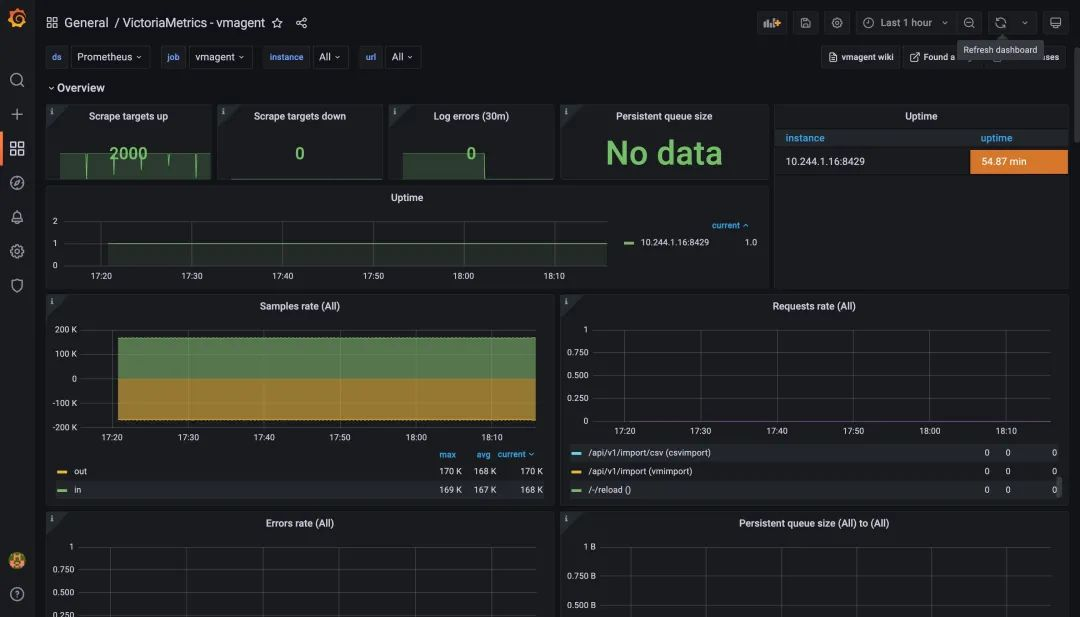 We can also look at the monitoring charts for VictoriaMetrics, a single-node remote storage, and see that it is currently working properly and has over a million active time series. 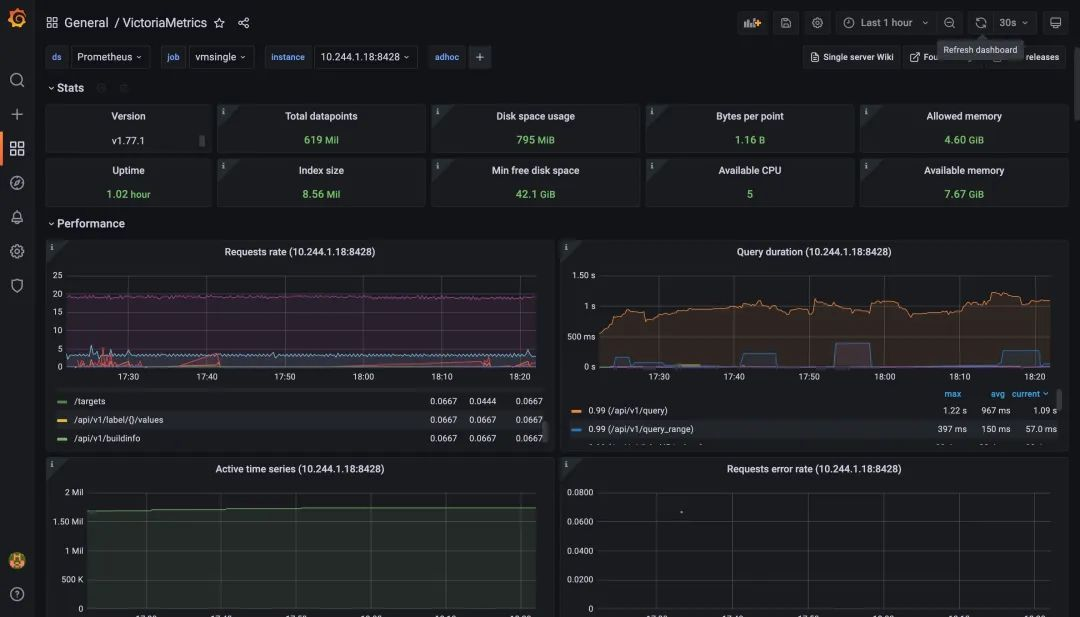 In addition to the above monitoring charts to see the results of the stress test, we can also go through some of the indicators below to verify that the stress level has been reached.

These metrics can be queried by executing the make monitor command. 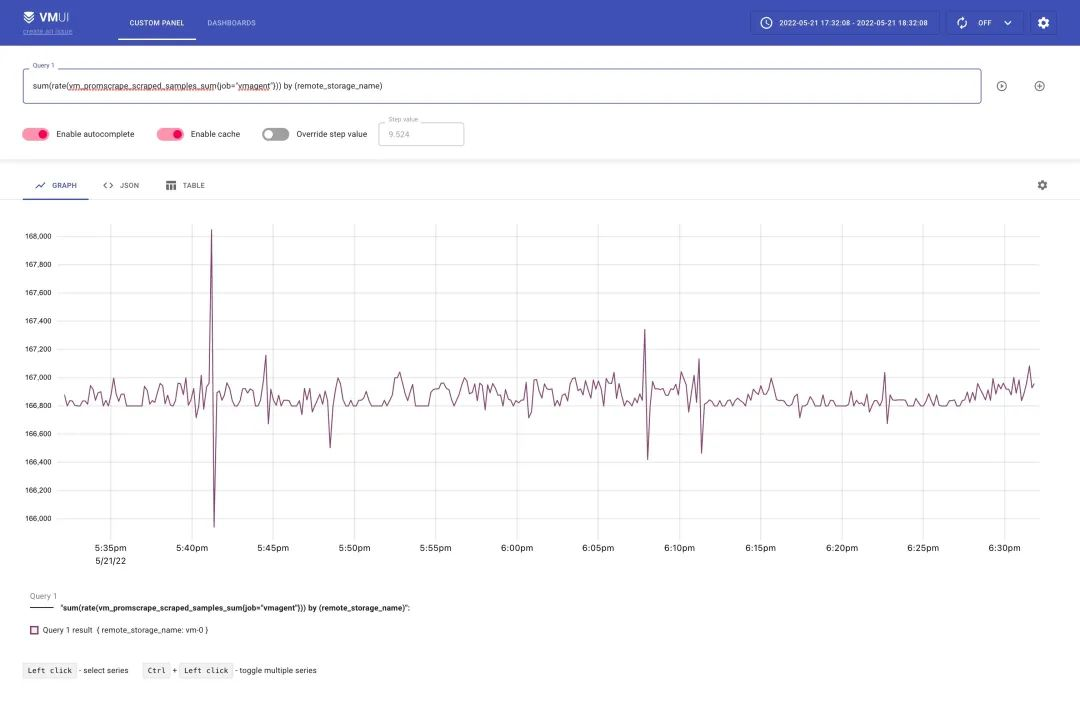 From our testing here 2000 crawl targets does not reach the upper limit, so we can continue to increase the value for testing, for example to 2500, and if the components are still working properly, then increase it to 3000 and continue testing. 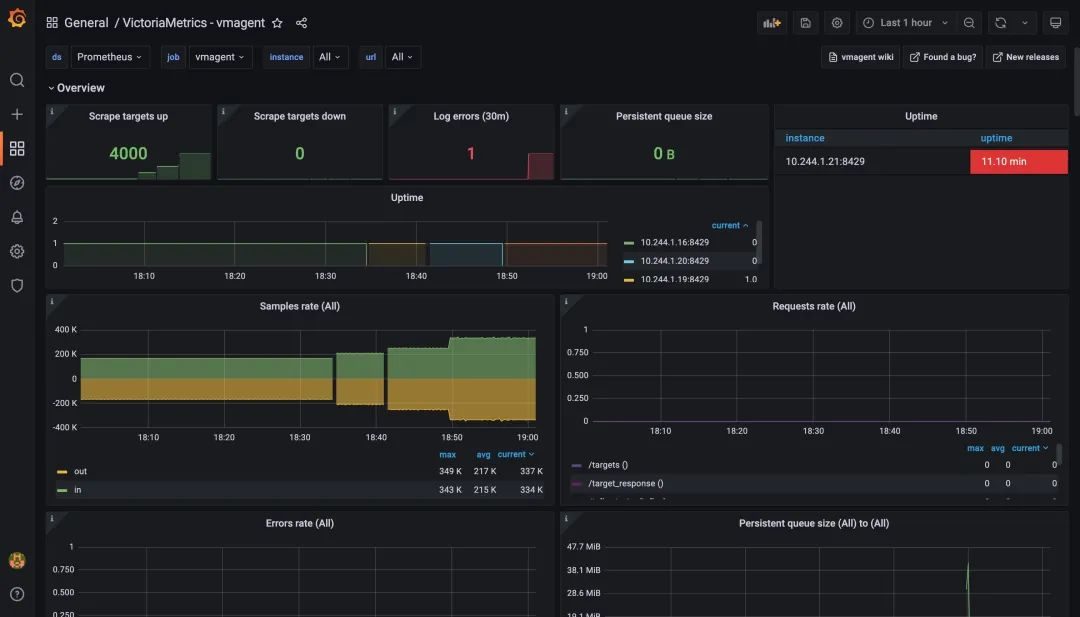 The test can be terminated by using the following command.

When comparing different solutions or different versions of the same solution by stress testing the data accepted by the Prometheus remote_write protocol, we should be able to draw a general conclusion. For example, how do solutions such as Prometheus itself, Cortex, Thanos, M3DB and TimescaleDB perform, but we always recommend not to simply trust these benchmarks, but to verify the amount of production data and resource usage.