On May 7, 2022, the Go 1.19 development branch entered the new feature freeze phase, which means that only bugs can be fixed and no new features can be added to Go 1.19. As the previous version of Go 1.18 was delayed by one month due to the introduction of generic changes, this directly led to a shortened development cycle for Go 1.19.

Although the development cycle is nearly a month shorter, Go 1.19 is still on track for an August 2022 release. And the first beta of Go 1.19 was released early yesterday morning. What are the important changes in Go 1.19, I’ll take you through this article for a first look.

Version feature changes are subject to final release! This article is only a preview and will not go into too much detail. We will talk about the details after the official release of Go 1.19.

Although the Go core team put a lot of effort into Go 1.18 generics, there are still known innate limitations in this piece of Go 1.18 release of generics, as well as some problems found gradually afterwards, and Go 1.19 version will continue to polish Go generics, and focus on fixing the generic issues found in Go 1.18. Currently there are about 5-6 generic issues to be fixed in Go 1.19 development release. The possibility of liberalizing some of the generalization constraints talked about earlier is not expected to be fulfilled in Go 1.19.

What is certain, however, is that Go 1.19 will include a fix for generics in the Go syntax specification.

The scope of an identifier denoting a type parameter of a function or declared by a method receiver is the function body and all parameter lists of the function.

The scope of an identifier denoting a type parameter of a function or declared by a method receiver starts after the function name and ends at the end of the function body.

Such a change allows the source code that would have compiled with an error under the current version of the Go compiler (Go 1.18.x) to compile properly in Go 1.19.

The Go memory model is one of the most abstract pieces of Go documentation, bar none! As Go has evolved, the original Go memory model description was less formal in many places and lacked descriptions of some synchronization mechanisms, such as atomic.

Go has the built-in ability to extract comments directly into package documentation. This is different from other languages that generate documentation via third-party tools. go doc comment provides a great convenience for Gopher. However, go doc comment was designed in 2009 and is somewhat outdated. There is insufficient support for many presentation forms or lack of more precise formatting descriptions. Russ Cox led a revision of go doc comment this time, adding support for hyperlinks, lists, headings, standard library API references, and other formatting, and the revised go doc comment is not markdown syntax, but borrows from markdown syntax, and is compatible with the old comment format. Here are some rendered images of the new doc comment provided by Russ Cox. 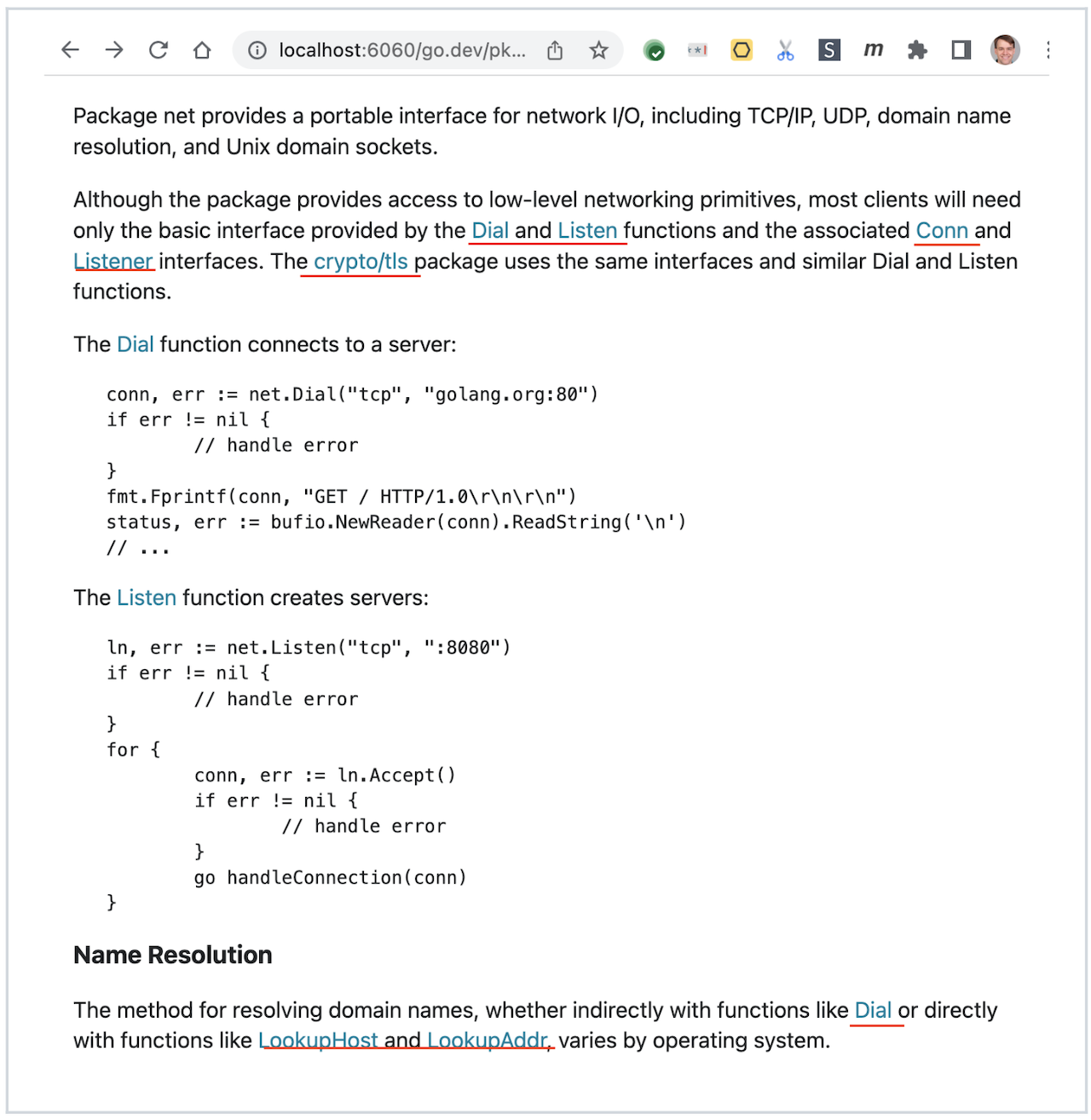 In Go 1.19, a new runtime.SetMemoryLimit function was introduced along with a GOMEMLIMIT environment variable. With this memory soft limit, the Go runtime will attempt to maintain this memory limit by limiting the size of the heap and by returning memory more aggressively to the underlying os to try to prevent Go programs from being killed for allocating too much heap and exceeding the system memory resource limit.

Note: The limit is on the total amount of memory controlled by the go runtime, but not on the memory requested by the developer from os (e.g., via mmap). The details of the limit can be found in the proposal design document.

Also note: the limit does not eliminate 100% of the out-of-memory cases.

Go 1.19 will raise the open file limit by default at startup

Upon investigation, some systems set an artificial soft limit on the number of open files, mainly for compatibility with code that uses select and its hard-coded maximum file descriptor (limited by the size of fd_set). Usually the limit is 1024, some are smaller, e.g. 256, so that even simple programs like gofmt can easily encounter an open file descriptor overload error when they traverse a file tree in parallel.

Go does not use select, so it should not be affected by these limits. So for go programs that import os packages, Go will raise these limits by default in 1.19 to hard limit.

Go 1.19 race detector will be upgraded to version v3 of the thread sanitizer

The upgraded new race detector will have 1.5x-2x better race detection performance compared to the previous version, half the memory overhead, and no upper limit on the number of goroutines.

The thread sanitizer detects how data contention works: it records information about each memory access and detects whether there is contention between threads for that piece of memory. Based on this principle, we also know that once race detection is enabled, the execution efficiency of Go programs will be greatly affected and the running overhead will increase significantly. v3 thread sanitizer has been optimized, but the overall impact on the program is still there and still significant.

Note, however, that “*_unix.go” retains its original semantics and cannot be recognized. so that it is backwards compatible with existing files. This is especially true for use outside of the go standard library.

Some changes to the standard library

net package will use EDNS

In Go 1.19, the net package will use EDNS to increase the size of DNS packets to comply with modern DNS standards and implementations. This should help with some DNS server issues.

Go flag package adds TextVar function, so that the flag package can be integrated with any Go type that implements encoding.Text{Marshaler,Unmarshaler}. For example.

Compared to Go 1.18, Go 1.19 is indeed a “minor release”. But Go 1.19’s updates to the memory model, the addition of SetMemoryLimit, the revision of the go doc comment, and the continued polishing of go runtime can still generate a little “excitement” among gophers, especially The addition of SetMemoryLimit will improve the situation of Go applications being killed due to untimely GC, let’s wait and see.

The milestone for Go 1.19 is here, and all features and fixes can be seen in that milestone.