After the HTTP/2 standard was published in 2015, most major browsers also supported the standard by the end of that year. Since then, with the advantages of multiplexing, header compression, server push, HTTP/2 has been favored by more and more developers.

In this article, we talk about the principle of HTTP/3 and the way of business access.

Before we introduce HTTP/3, let’s take a brief look at the history of HTTP and understand the background of how HTTP/3 came to be. 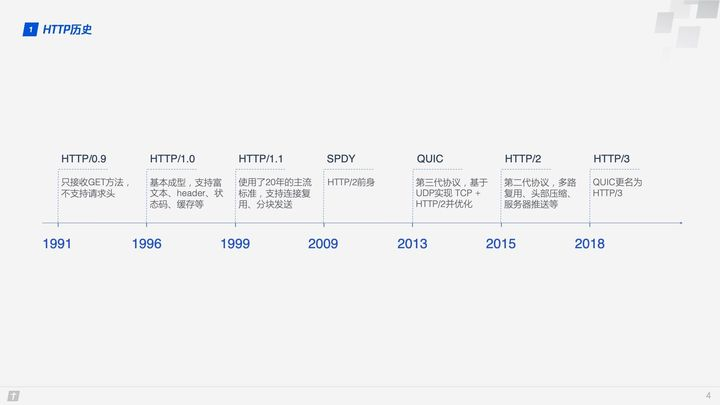 With the development of network technology, HTTP/1.1 designed in 1999 could no longer meet the demand, so Google designed the TCP-based SPDY in 2009, and later the SPDY development team pushed for SPDY to become an official standard, but it was not passed in the end. However, the development team of SPDY was involved in the whole process of HTTP/2 development and referred to many designs of SPDY, so we generally think SPDY is the predecessor of HTTP/2. Both SPDY and HTTP/2 are based on TCP, which has a natural disadvantage in efficiency compared to UDP, so in 2013 Google developed a UDP-based transport layer protocol called QUIC, which is called Quick UDP Internet Connections, hoping that it can replace TCP and make web page transmission more efficient. Later on proposed, the Internet Engineering Task Force officially renamed QUIC-based HTTP (HTTP over QUIC) as HTTP/3.

TCP has always been the dominant protocol in the transport layer, while UDP has been quiet and has long been perceived as a fast but unreliable transport layer protocol.

But sometimes, from a different perspective, the disadvantages can also be advantages.

QUIC (Quick UDP Internet Connections) is based on UDP, which is fast and efficient. QUIC also integrates the advantages of TCP, TLS and HTTP/2, and optimizes them. The relationship between them can be clearly illustrated in a diagram. 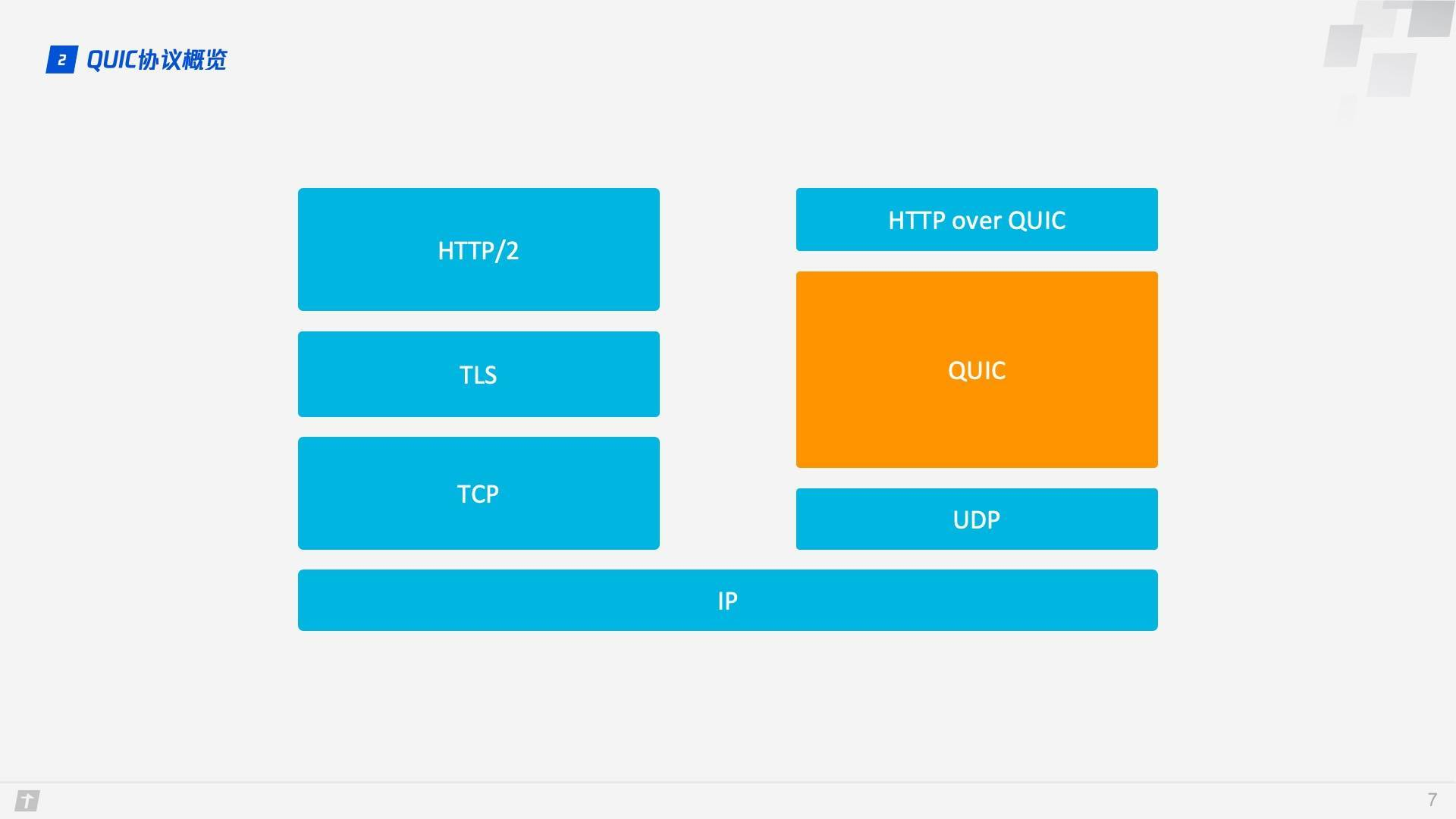 So if you want to understand HTTP/3, you can’t get around QUIC. Here are a few important features that will give you a deeper understanding of QUIC.

The difference between HTTP/2 and HTTP/3 connection establishment can be visualized in a diagram. 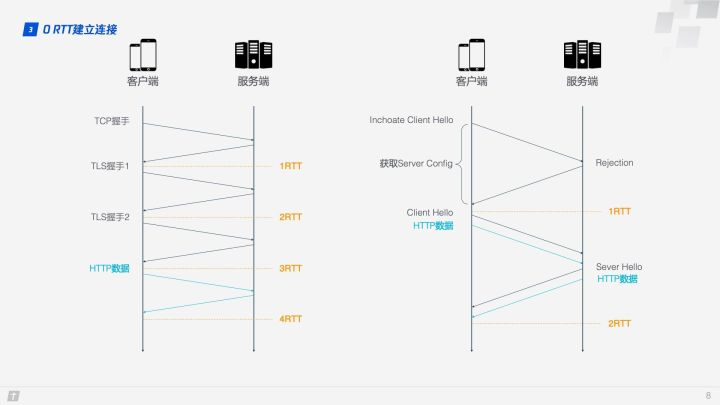 HTTP/2 connections require 3 RTT, and 2 RTT if we consider session reuse, i.e., caching the symmetric keys calculated from the first handshake.Further, if TLS is upgraded to 1.3, then HTTP/2 connections require 2 RTT, and considering session reuse requires 1 RTT. Some may argue that HTTP/2 does not necessarily require HTTPS, and that the handshake process can be simplified.This is true, the HTTP/2 standard does not need to be based on HTTPS, but virtually all browser implementations require HTTP/2 to be based on HTTPS, so an encrypted HTTP/2 connection is essential. HTTP/3 requires only 1 RTT for the first connection, and 0 RTT for subsequent connections, meaning that the first packet sent by the client to the server comes with the request data, which is beyond the reach of HTTP/2. So what’s the rationale behind this? Let’s look at the QUIC connection process in detail.

Thus, QUIC spends a total of 1 RTT from requesting a connection to formally sending HTTP data, and this 1 RTT is mainly to obtain Server Config, and if the client caches Server Config for the later connection, then it can send HTTP data directly, realizing 0 RTT to establish the connection. 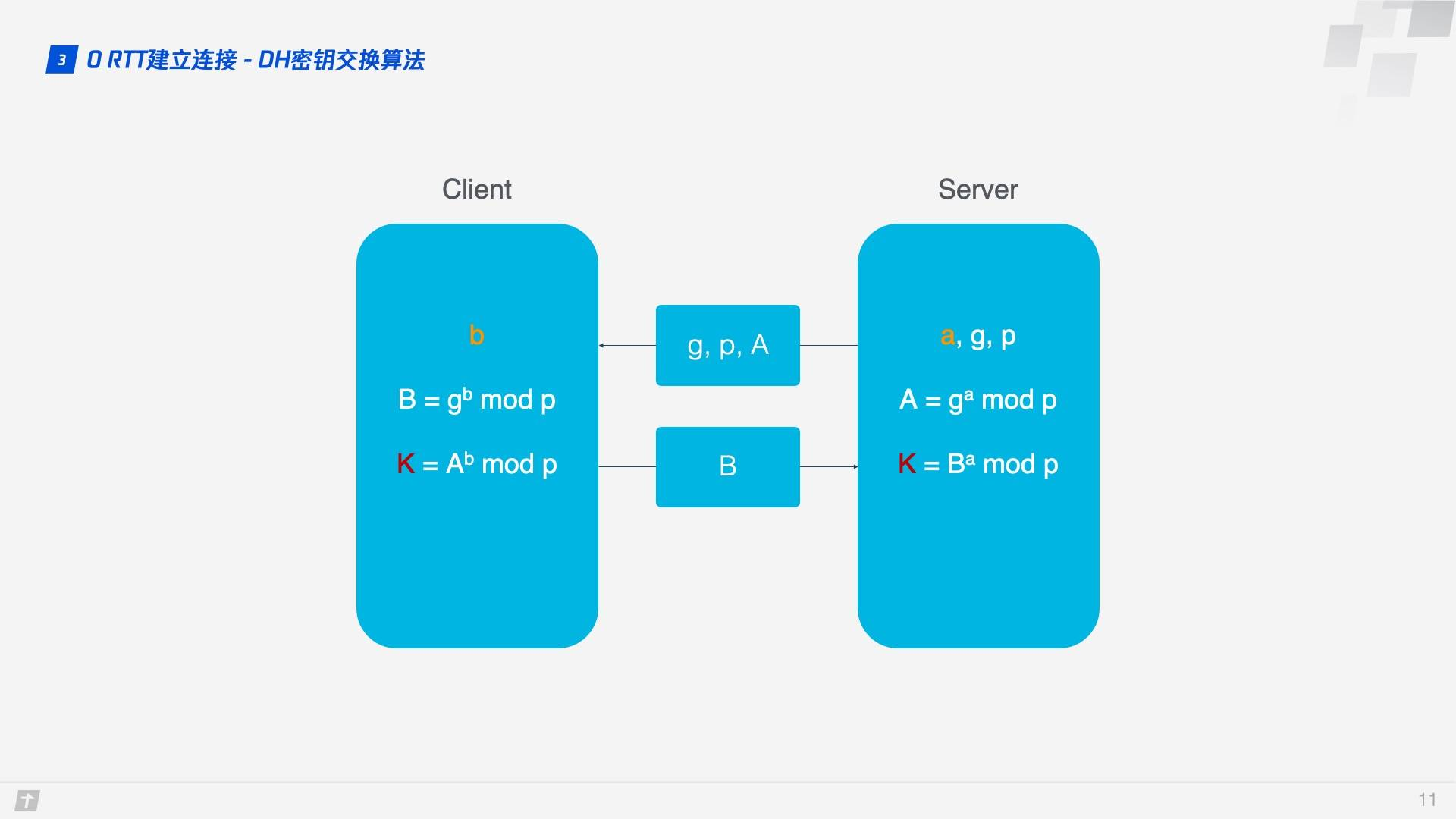 DH key exchange algorithm is used here, the core of DH algorithm is that the server generates a, g, p 3 random numbers, a holds itself, g and p to be transmitted to the client, and the client will generate b this 1 random number, through DH algorithm client and server can calculate the same key. In this process a and b are not involved in network transmission, which is much more secure. Since p and g are large numbers, even if p, g, A and B transmitted in the network are hijacked, it is impossible to break the key by the current computer computing power. 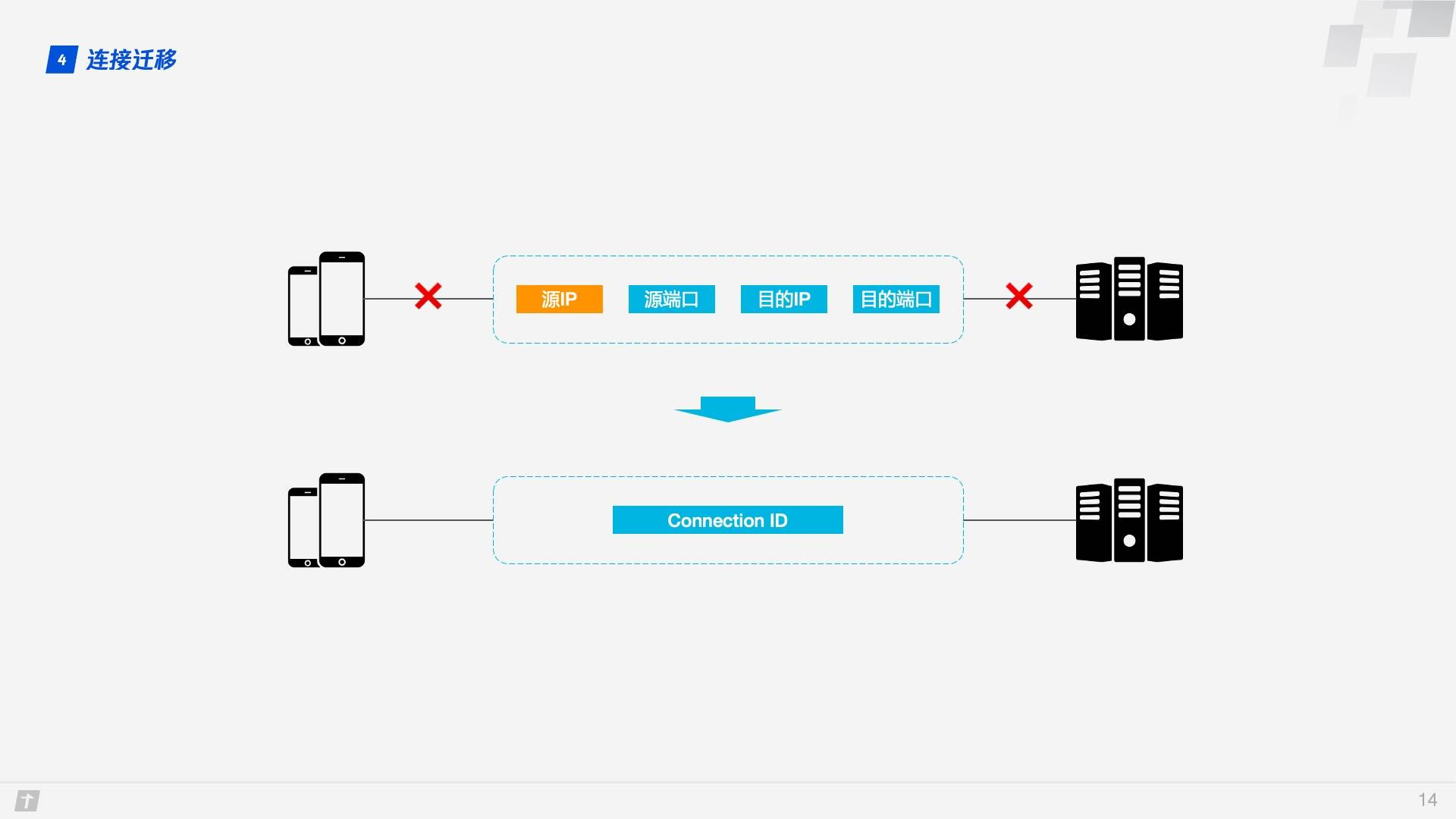 HTTP/1.1 and HTTP/2 both have Head of line blocking, so what is it?

TCP is a connection-oriented protocol, which means that an ACK message needs to be received after a request is sent to confirm that the other party has received the data. If each request has to be made after receiving the ACK message of the last request, then it is undoubtedly very inefficient. Later, HTTP/1.1 introduced Pipelining, which allows a TCP connection to send multiple requests at the same time, thus greatly improving transmission efficiency. 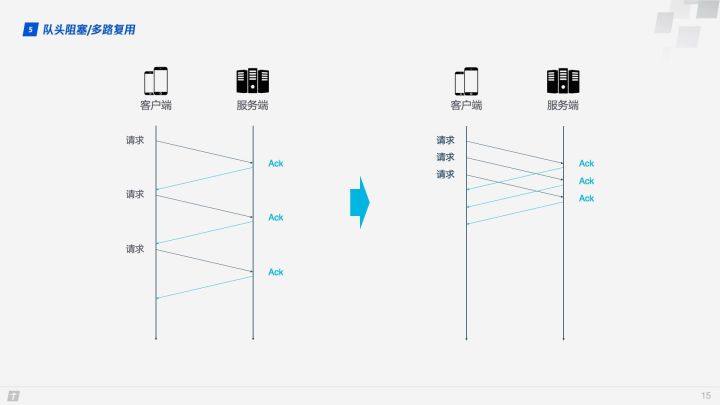 In this context, let’s talk about the HTTP/1.1 Head of line blocking. In the figure below, a TCP connection is transmitting 10 requests at the same time, where the 1st, 2nd and 3rd requests have been received by the client, but the 4th request is lost, then the next 5 - 10 requests are blocked and need to wait for the 4th request to be processed, thus wasting bandwidth resources. 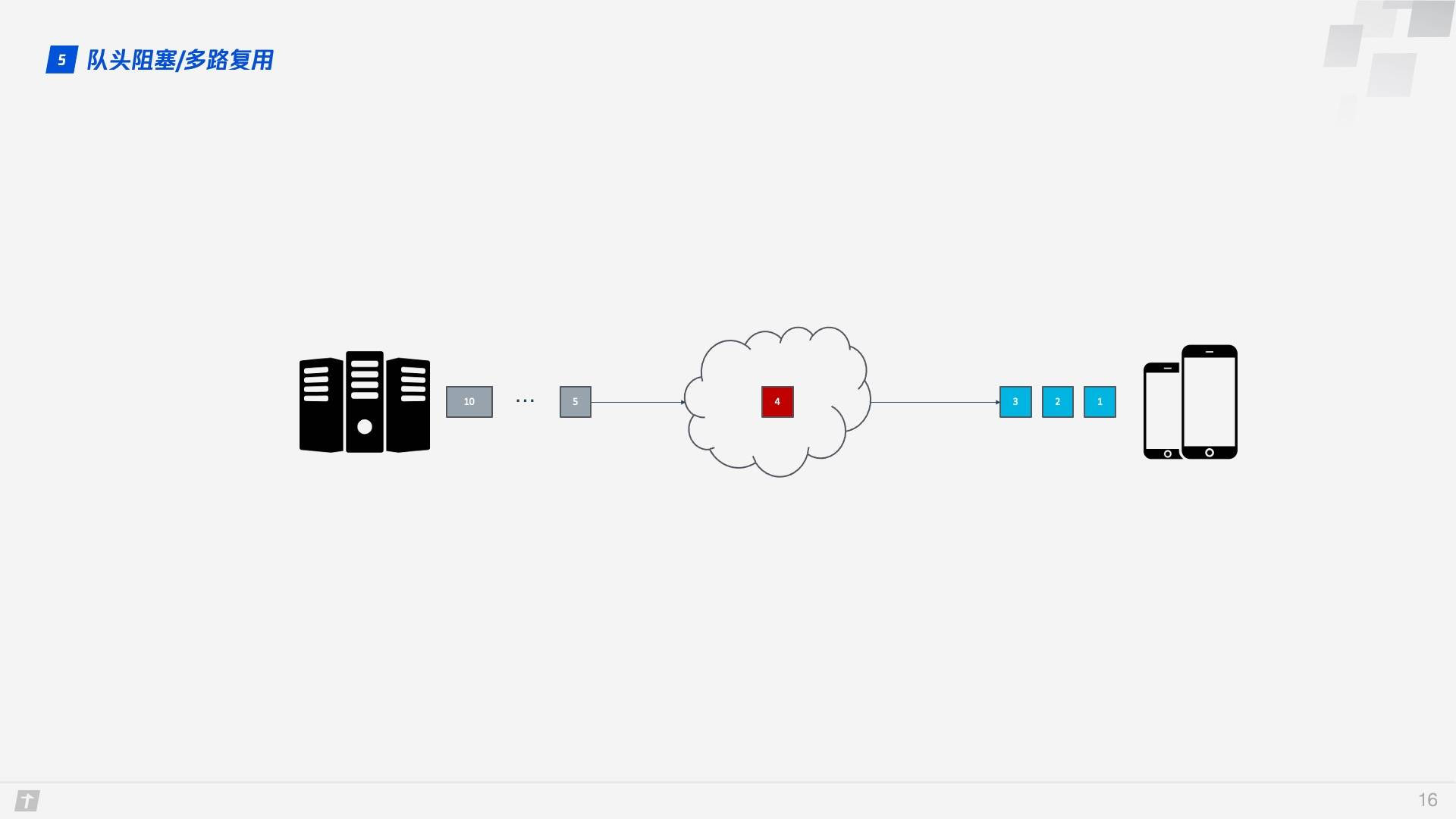 As a result, HTTP generally allows 6 TCP connections per host, which makes fuller use of bandwidth resources, but the problem of Head of line blocking in each connection still exists.

HTTP/2’s multiplexing solves the above Head of line blocking problem. Unlike HTTP/1.1 where only all packets of the previous request are transmitted before the next request can be transmitted, in HTTP/2 each request is split into multiple frames and transmitted simultaneously over a TCP connection, so that even if one request is blocked, it does not affect the other requests. As shown in the figure below, different colors represent different requests, and blocks of the same color represent the frames in which the requests are split. 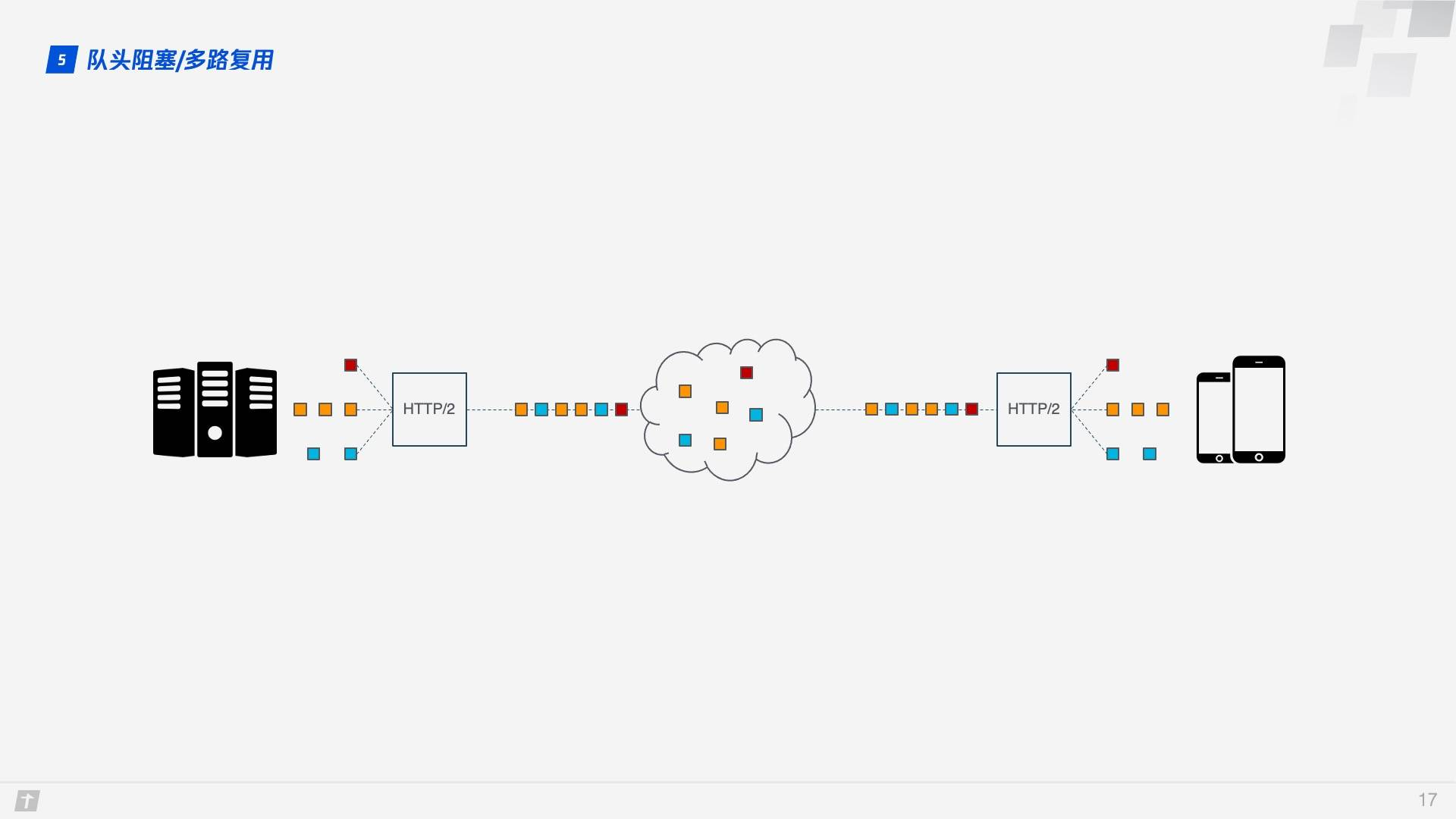 While HTTP/2 solves the blocking problem at the granularity of “requests”, the TCP protocol underlying HTTP/2 itself suffers from Head of line blocking. Each request in HTTP/2 is split into multiple frames, and the frames of different requests are combined into Streams, which are logical transport units over TCP, so that HTTP/2 achieves the goal of sending multiple requests over a single connection. This is the principle of multiplexing. Let’s look at an example where four Streams are sent simultaneously over a TCP connection, where Stream1 is delivered correctly and the third Frame in Stream2 is lost. TCP processes data in a strict order, with the first Frame sent being processed first. This requires the sender to resend the third frame, and Stream3 and Stream4 arrive but cannot be processed, so the entire connection is blocked. 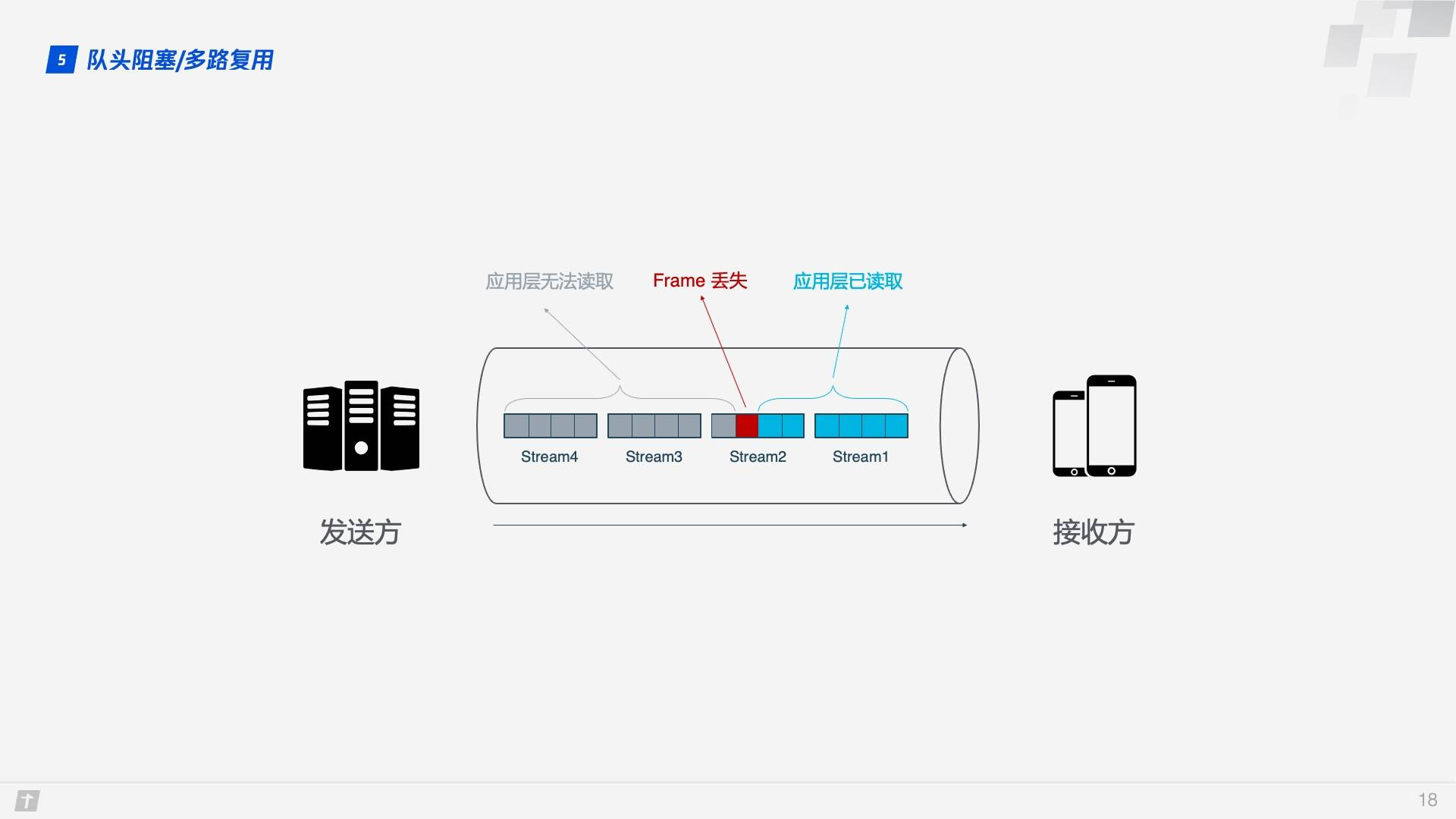 In addition, since HTTP/2 must use HTTPS, and the TLS protocol used in HTTPS also has the problem of queue head blocking, TLS organizes data based on Record, encrypts a bunch of data together (i.e., a Record), and then splits it into multiple TCP packets after encryption. Generally, each Record is 16K and contains 12 TCP packets, so if any one of the 12 TCP packets is lost, then the whole Record cannot be decrypted. 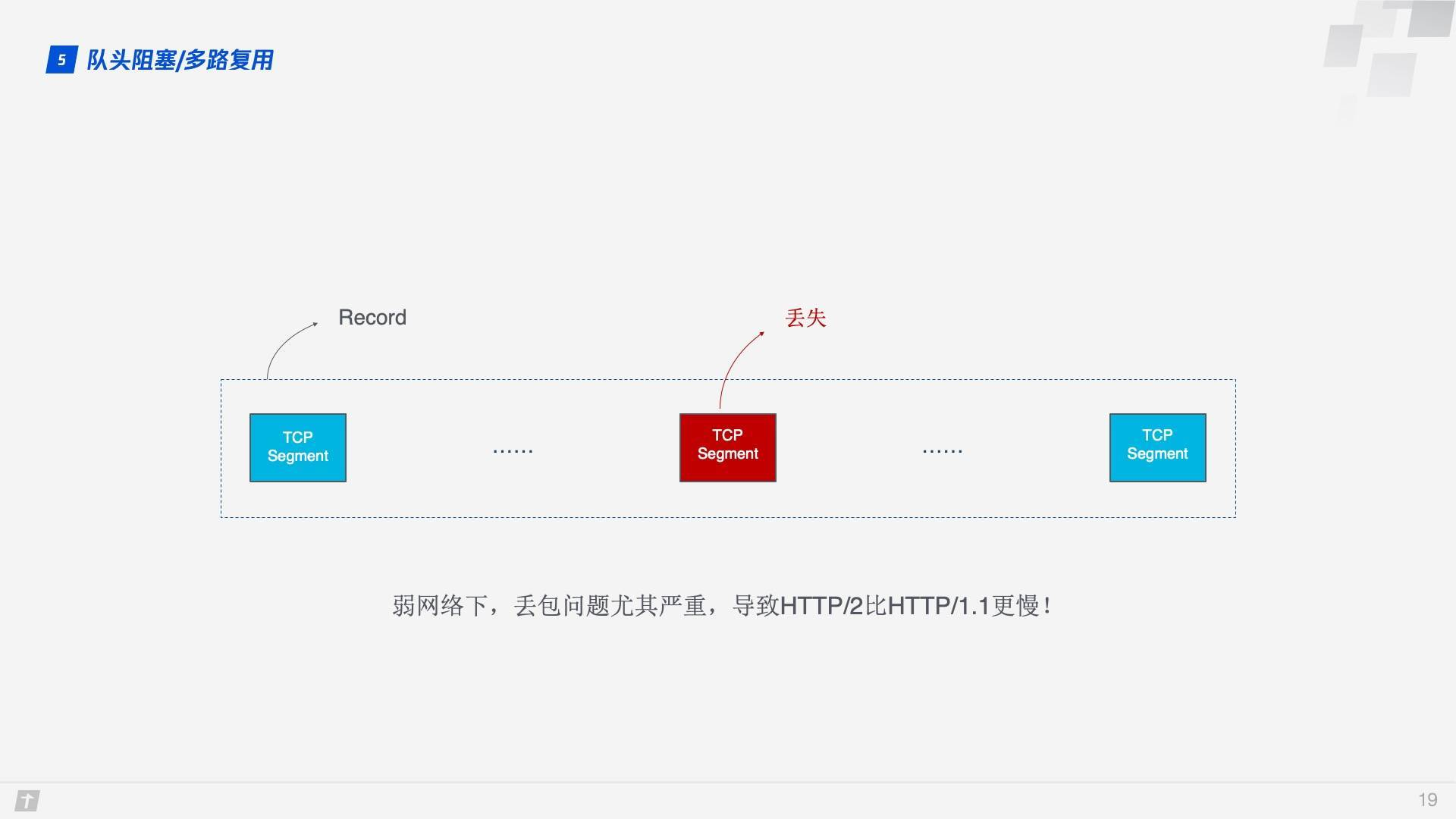 Head of line blocking causes HTTP/2 to be slower than HTTP/1.1 in weak network environments that are more prone to packet loss!

So how does QUIC solve the Head of line blocking problem? There are two main points. 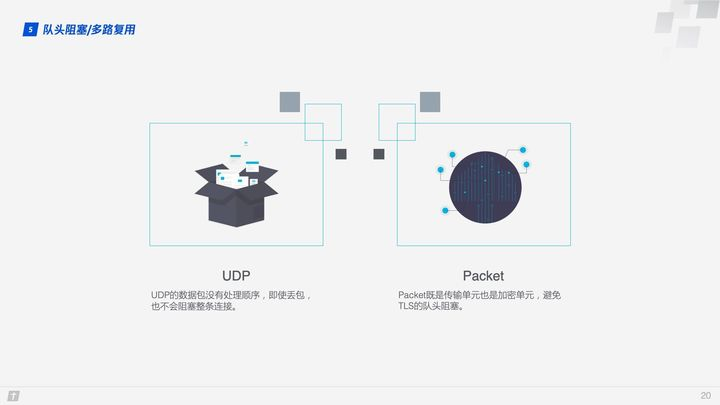 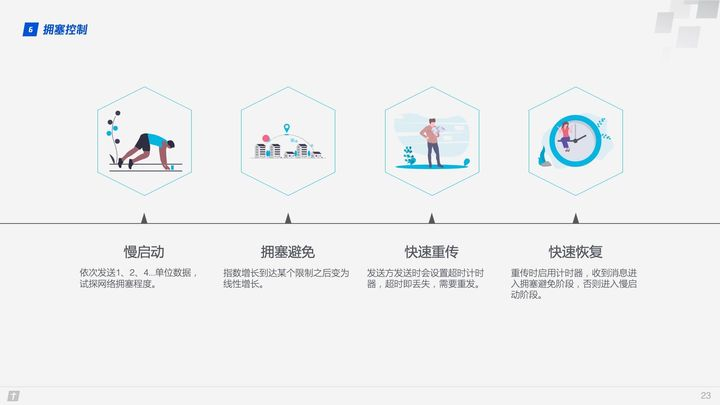 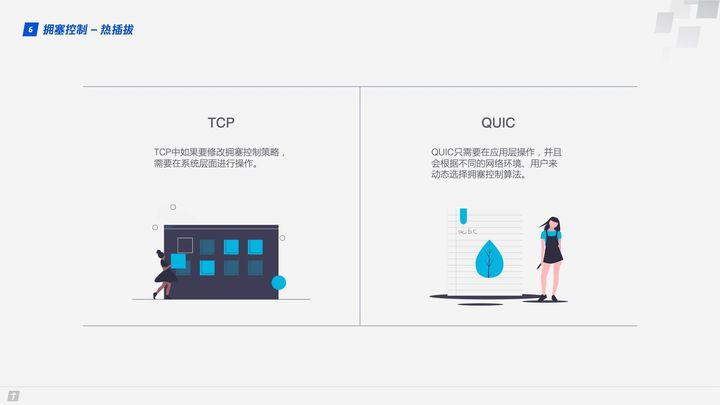 QUIC uses Forward Error Correction (FEC) techniques to increase the fault tolerance of the protocol. After a segment of data is cut into 10 packets, each packet in turn performs a heteroskedastic operation, the result of which is transmitted as a FEC packet together with the packet. If unfortunately a packet is lost during transmission, the data of the lost packet can be deduced from the remaining 9 packets and the FEC packet, which greatly increases the fault tolerance of the protocol. 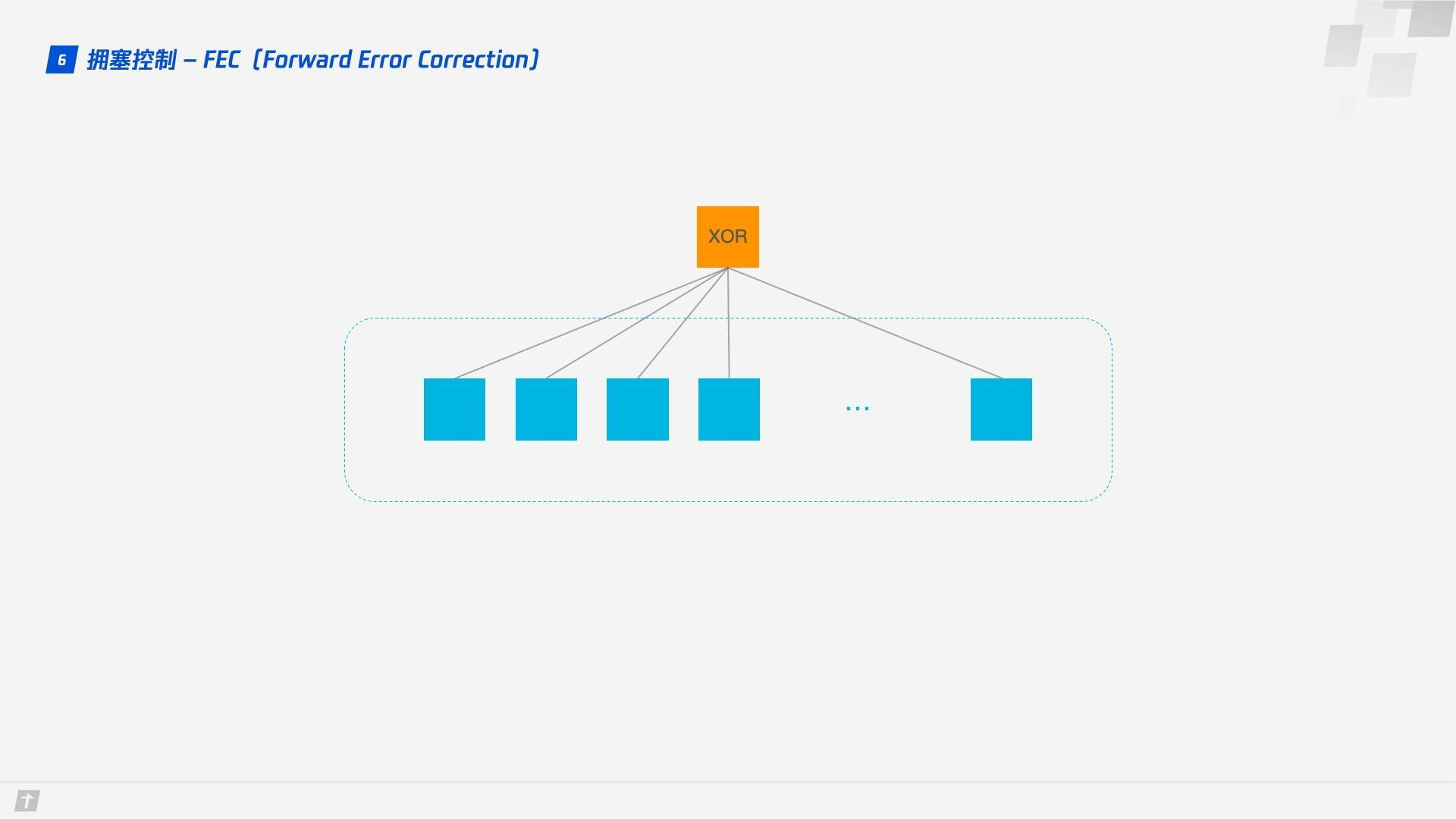 TCP uses Sequence Number and ACK to confirm the orderly arrival of messages for reliability, but this design is flawed. 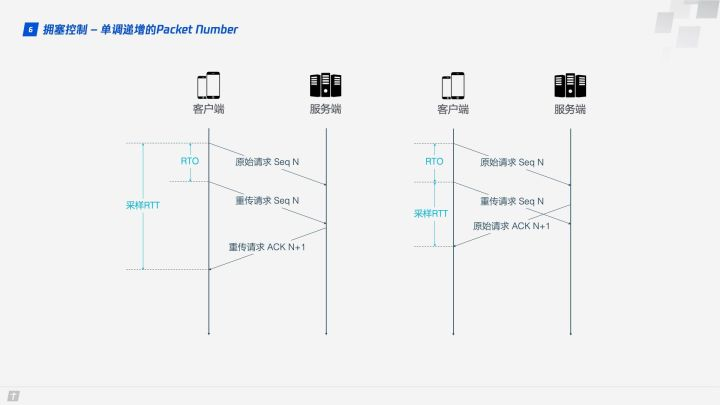 QUIC solves the ambiguity problem above. Unlike Sequence Number, Packet Number is strictly monotonically increasing, so that if Packet N is lost, the retransmission Packet will not be identified by N, but by a number larger than N, such as N + M. This makes it easy for the sender to know whether the ACK corresponds to the original request or the retransmission request when it receives the acknowledgment message. 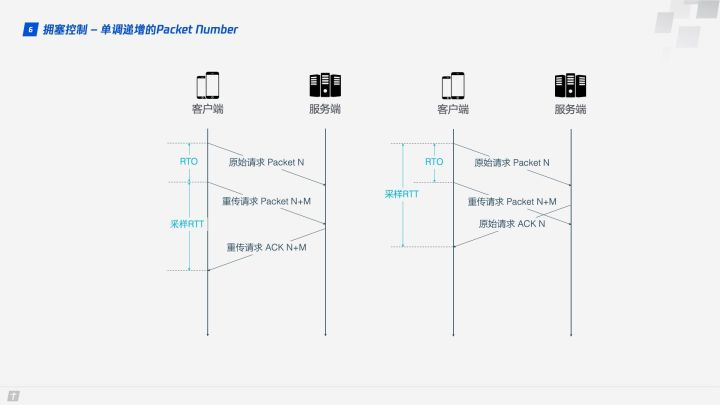 TCP calculates RTT without taking into account the delay between the receipt of data by the receiver and the sending of the acknowledgement message, as shown in the figure below, which is the ACK Delay. quic takes this delay into account to make the RTT calculation more accurate. 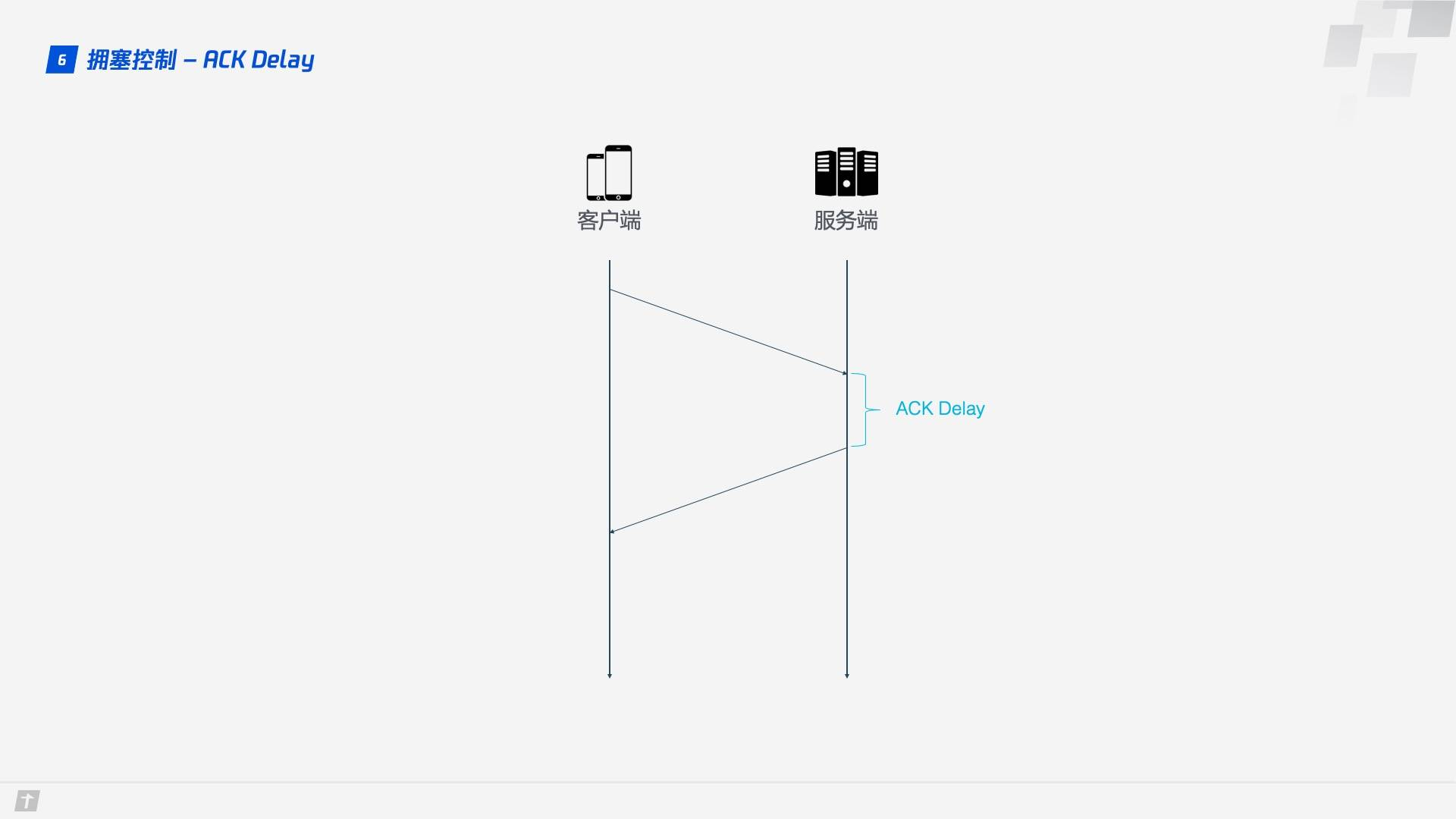 In general, the receiver should send an ACK reply after receiving a message from the sender to indicate that the data was received. However, it is too cumbersome to return an ACK reply for every data received, so it usually does not reply immediately, but replies after receiving multiple data. TCP SACK provides up to 3 ACK blocks, but in some scenarios, such as downloads, the server only needs to return data, but TCP is designed to “politely” return an ACK for every 3 packets received, and QUIC can piggyback up to 256 ACK blocks. In networks with severe packet loss, more ACK blocks can reduce the amount of retransmissions and improve network efficiency. 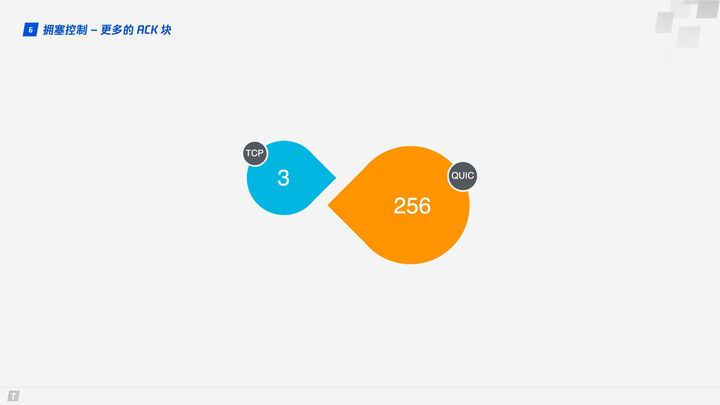 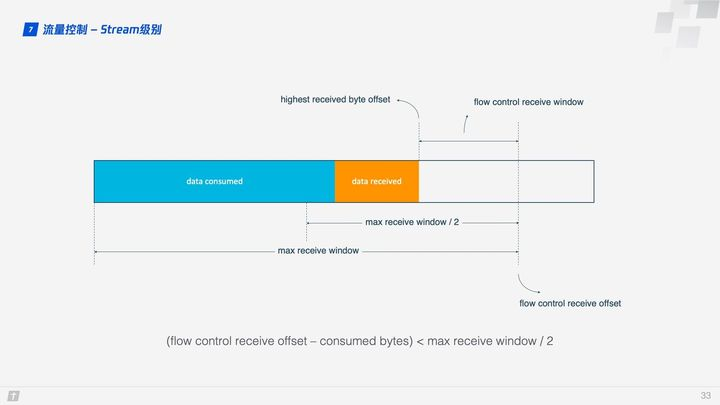 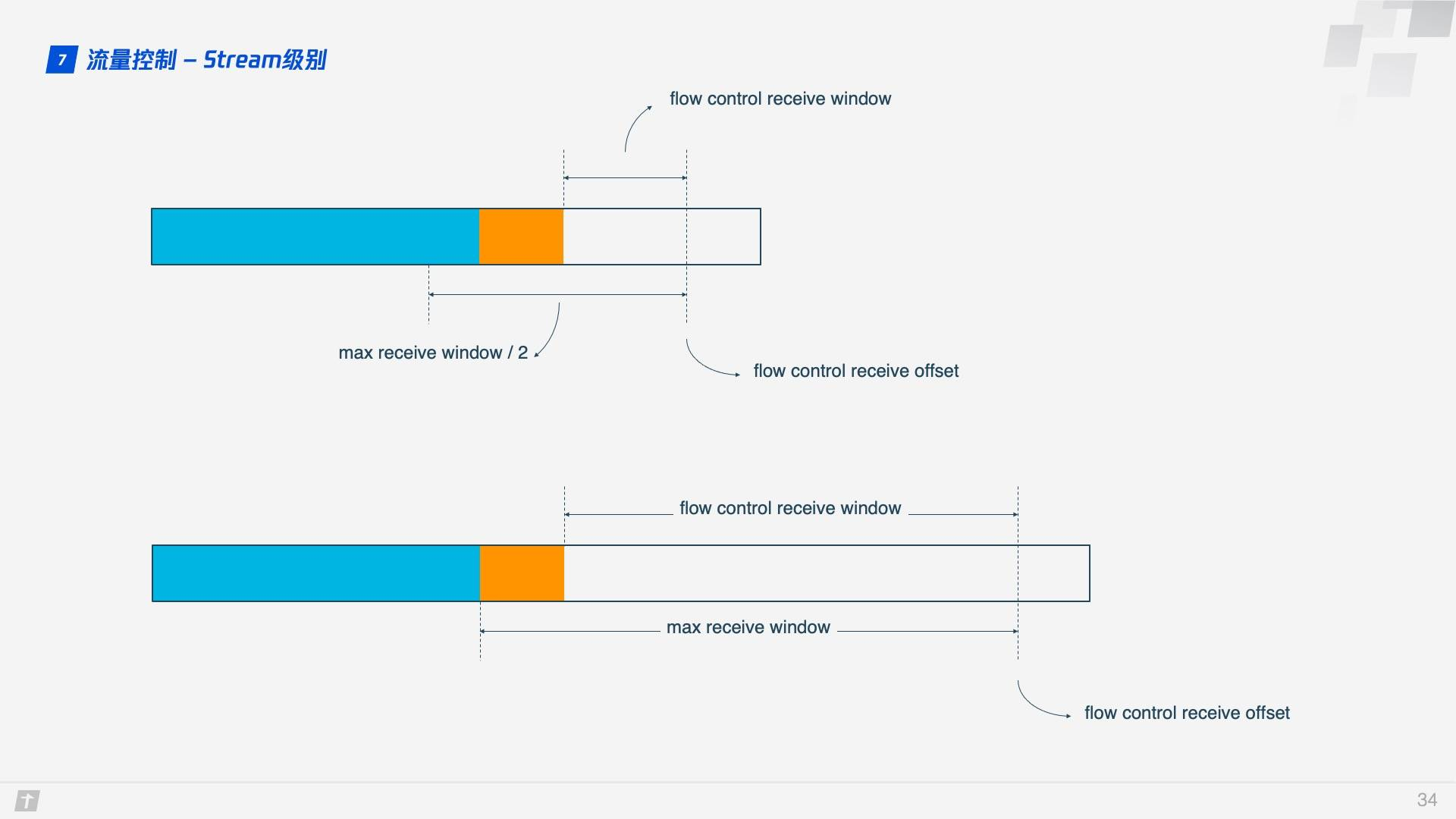 Stream level is limited to prevent the receiver from receiving too much data, and it is more necessary to use the Connection level flow control. Once you understand Stream flow, you can also understand Connection flow control well.

So how do we access QUIC as a business running on X5? Thanks to X5 and STGW, the changes required to access QUIC are minimal and require only two steps. 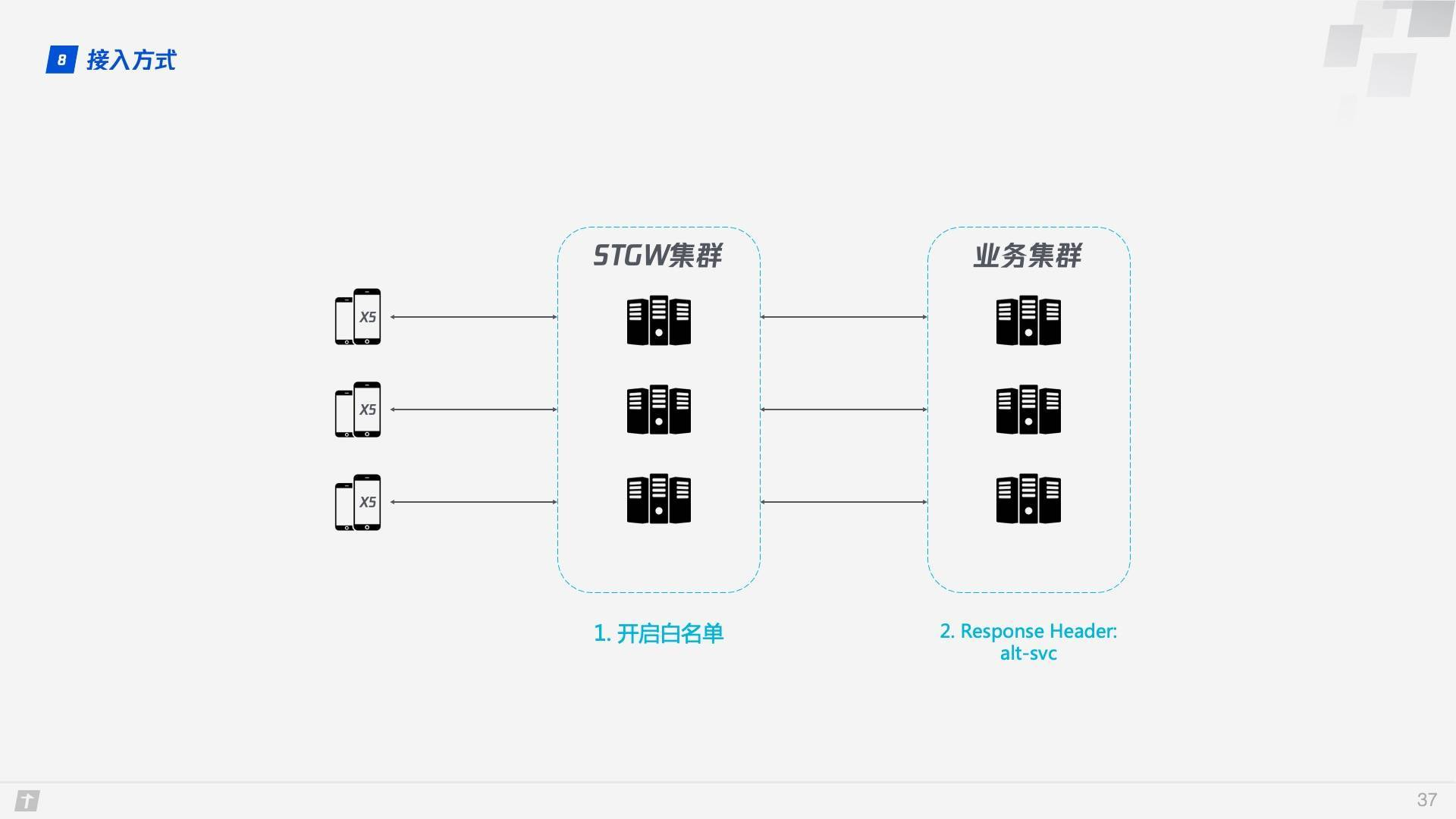 When using QUIC, STGW has the obvious advantage of having STGW communicate with clients that support QUIC (in this case X5), while the business backend still uses HTTP/1.1 to communicate with STGW, and the cached information needed for QUIC, such as Server Config, is maintained by STGW.

The service domain is added to the STGW whitelist and the alt-svc attribute is added to the Response Header of the service resource, so how does QUIC establish the connection? There is a critical step here: negotiating the upgrade. The client is not sure if the server supports QUIC and may fail if it rashly requests a QUIC connection, so it needs to go through a negotiation upgrade process to decide whether to use QUIC. 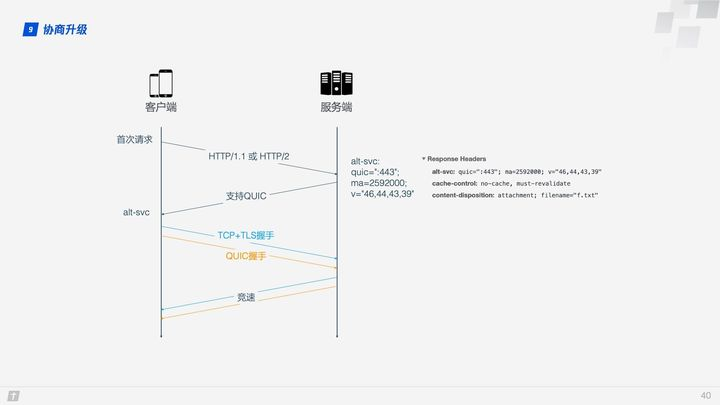 On the first request, the client will use HTTP/1.1 or HTTP/2. If the server supports QUIC, the alt-svc header is returned in the response data, telling the client that the next request can go QUIC. alt-svc contains mainly the following information.

After confirming that the server supports QUIC, the client initiates both a QUIC connection and a TCP connection to the server, compares the speed of the two connections, and then chooses the faster protocol, a process called a “race to the bottom”, which is usually won by QUIC. 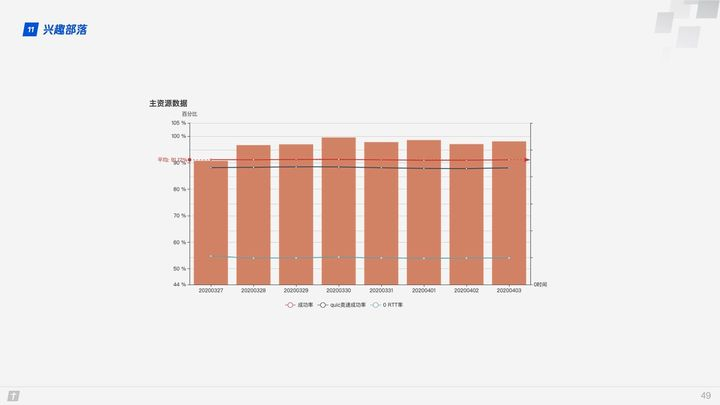 The success rate of QUIC in establishing connections is above 90%, and the race success rate is close to 90%, with a 0 RTT rate of around 55%. 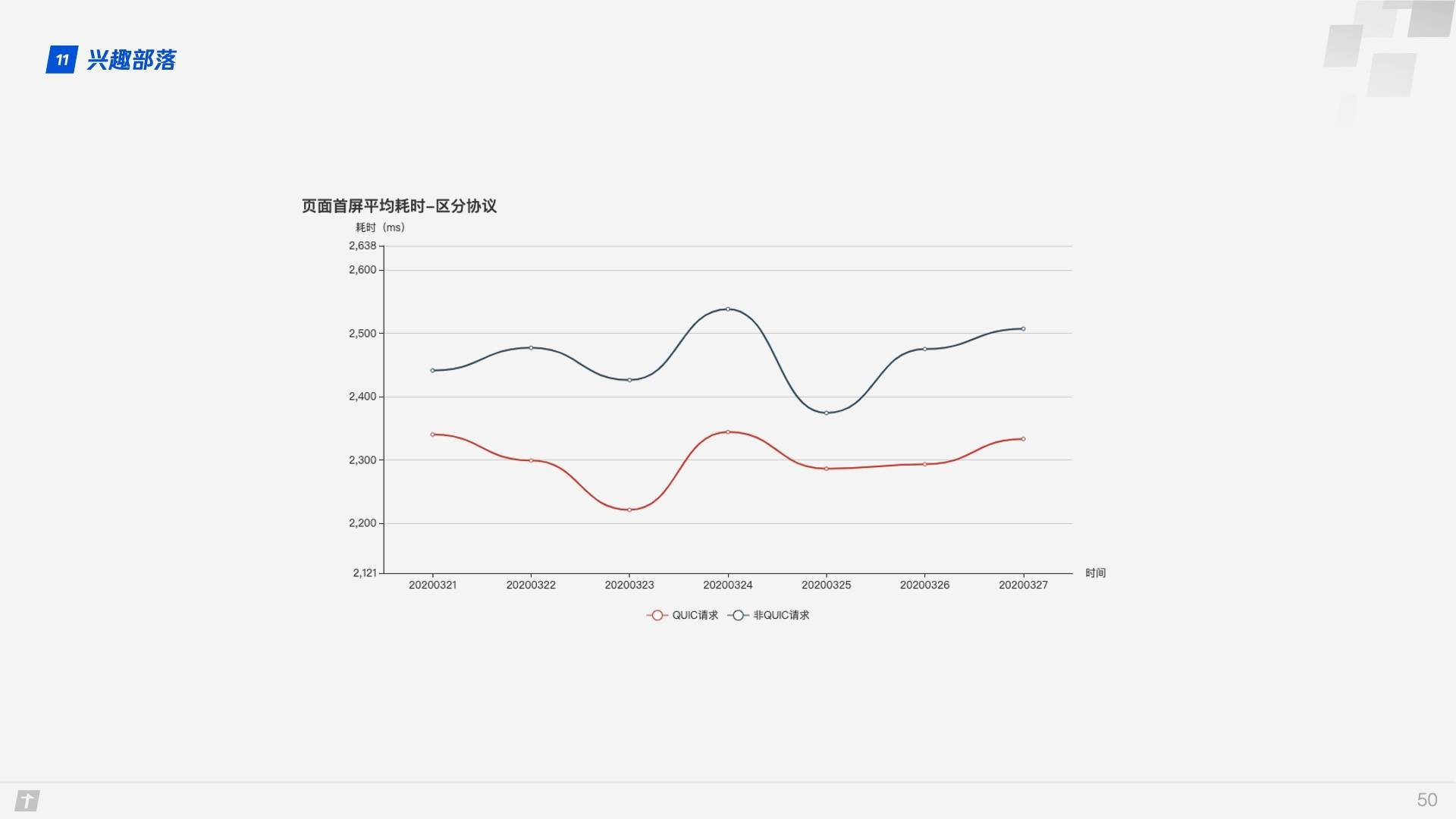 The first screen of the page takes 10% less time when using the QUIC protocol than the non-QUIC protocol. 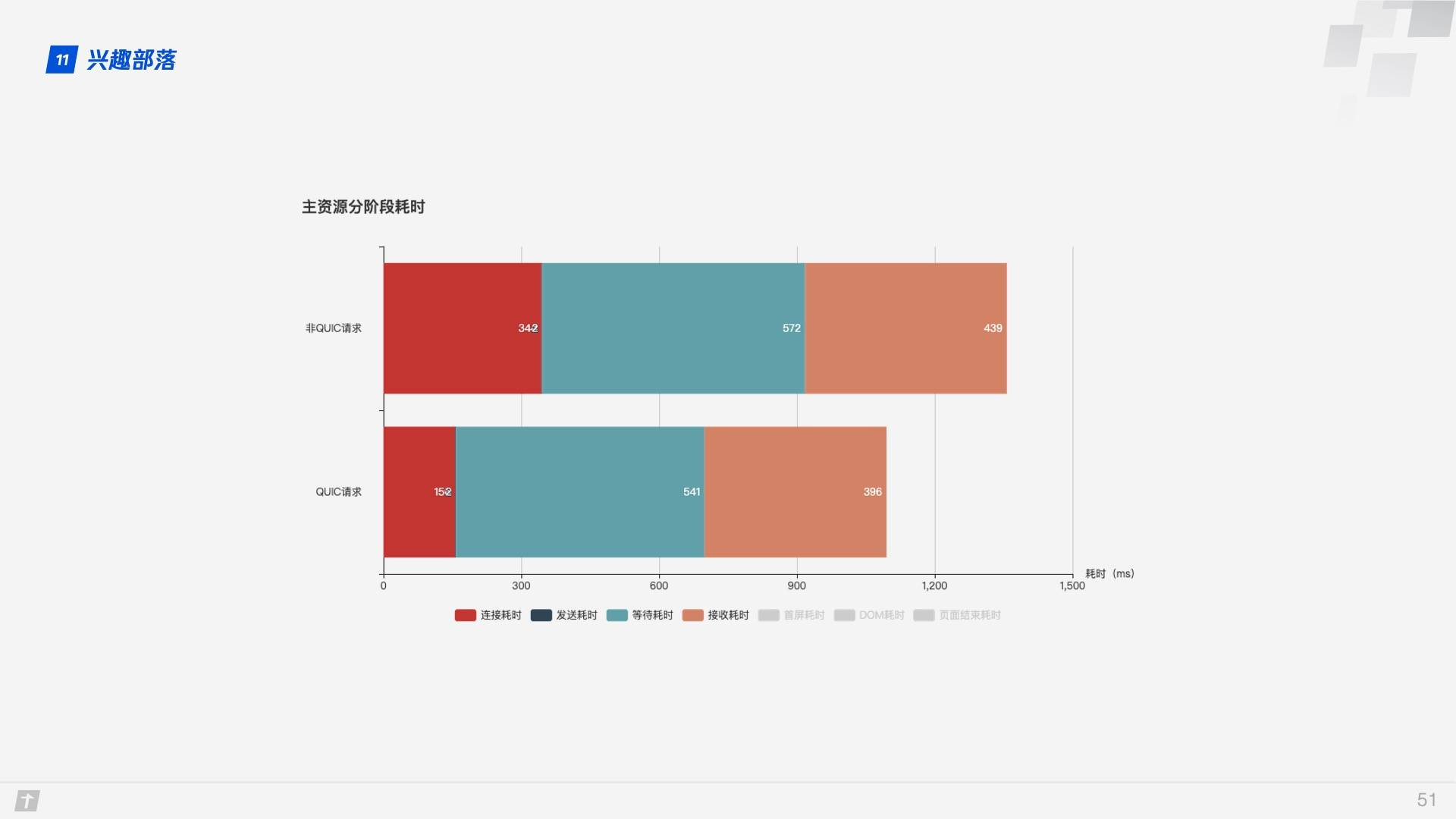 Looking at the different phases of resource acquisition, the QUIC protocol saves more time in the connection phase. 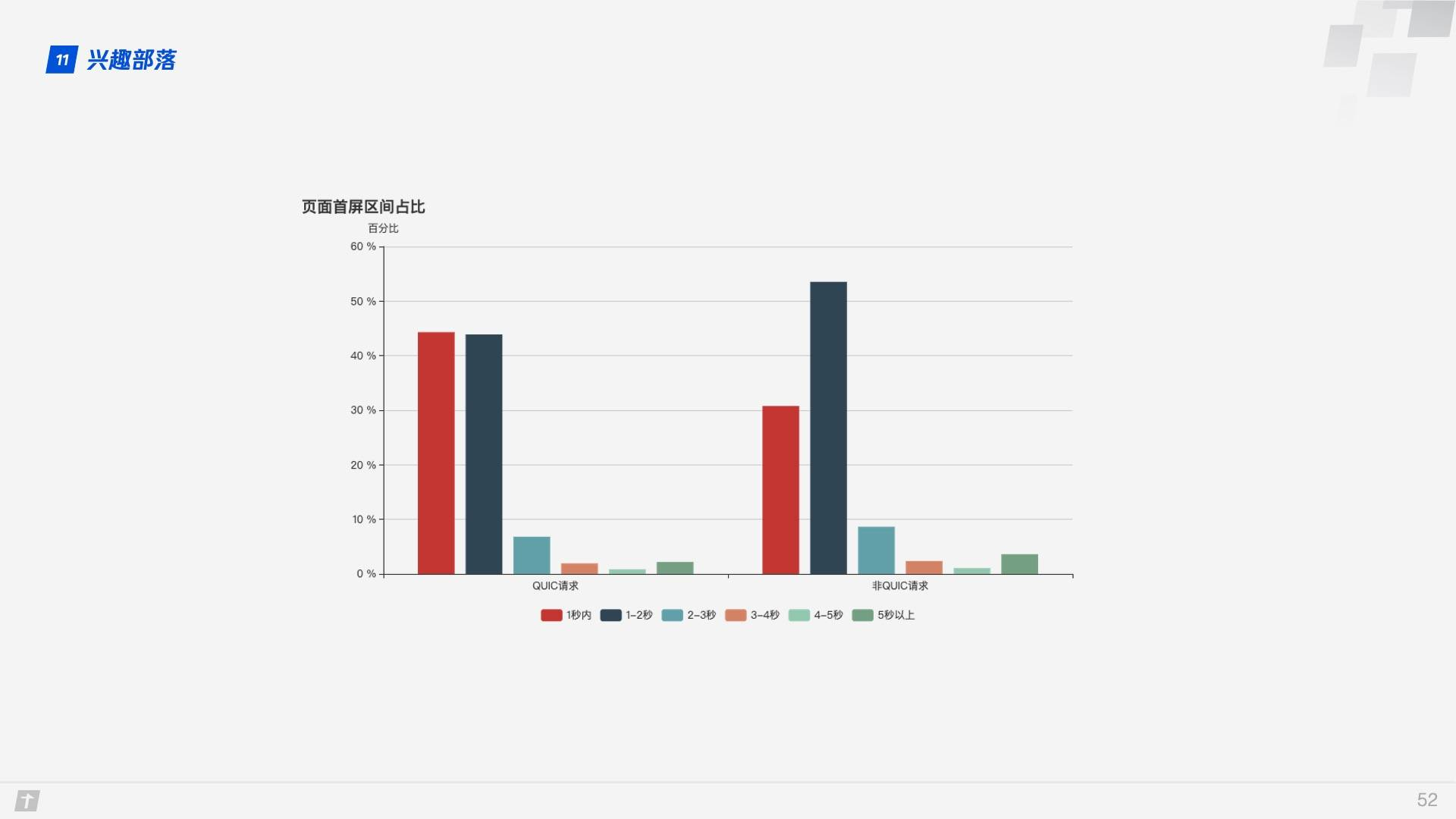 Previously, Microsoft announced that it had open sourced its own internal QUIC library, MsQuic, and would fully recommend the QUIC protocol as a replacement for TCP/IP.

The future of HTTP/3 is in sight.