The relationship between the three is shown below. 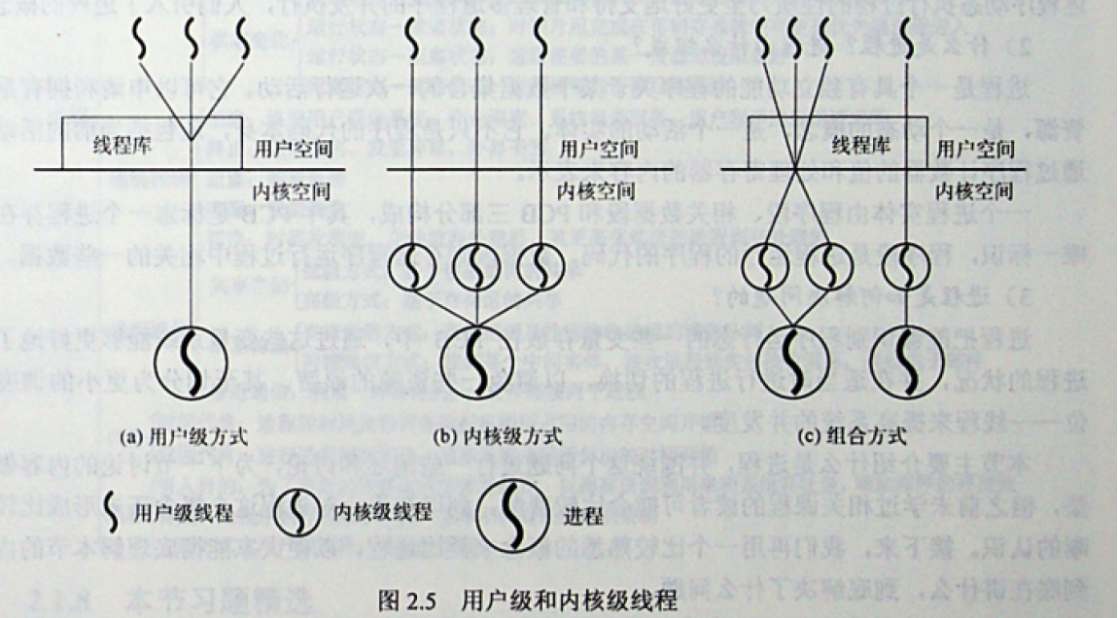 The relationship between goroutine and threads in Golang is shown below. 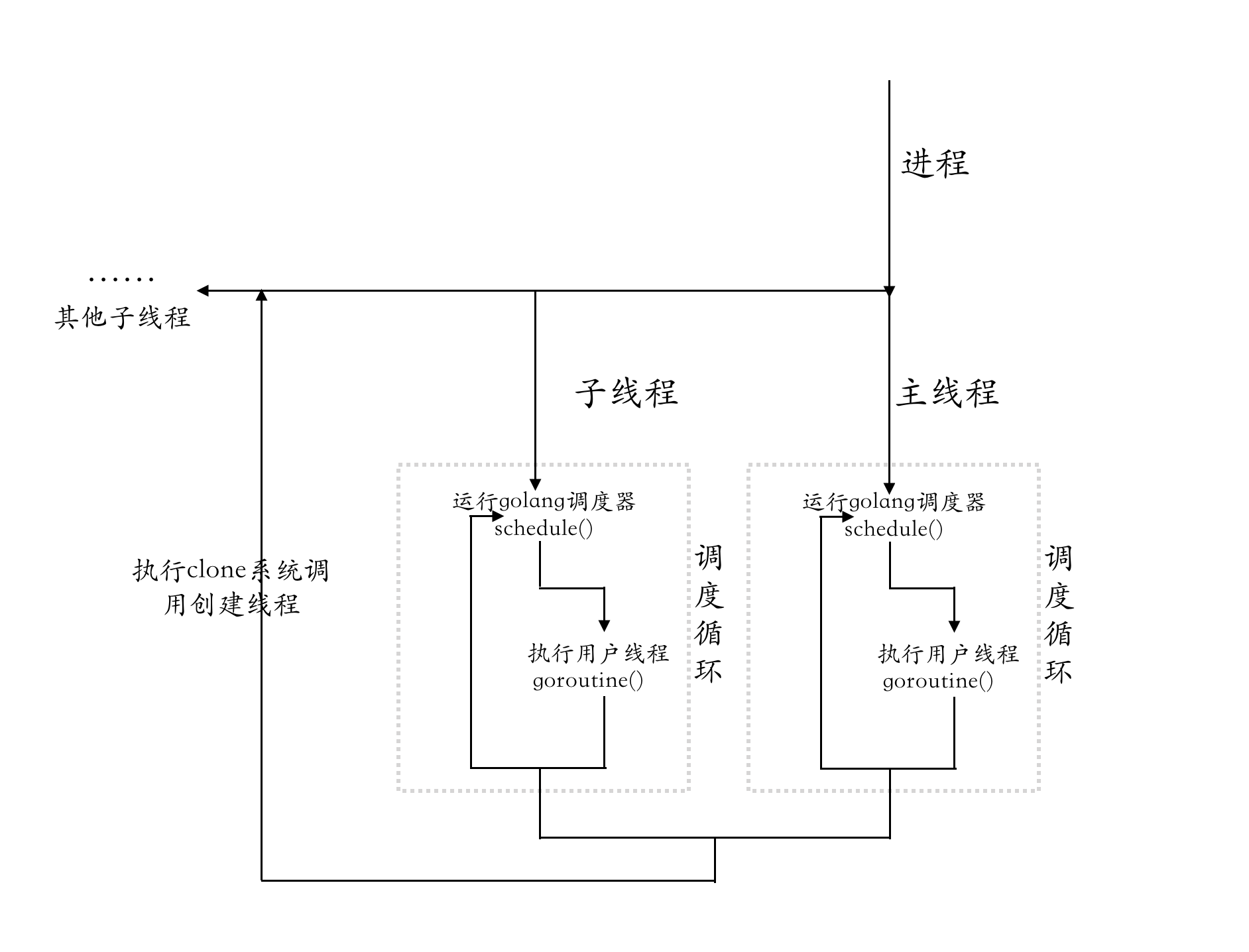 When a Golang program starts, it first creates a process, then a main thread, which executes some code for runtime initialization, including scheduler initialization, and then starts the scheduler, which keeps looking for a goroutine that needs to be run to bind to a kernel thread.

Reasons for Golang to use goroutine

Although there are already multi-threads and multi-processes in the operating system to solve the problem of high concurrency, but in today’s Internet mass and high concurrency scenario, the performance requirements are becoming more and more demanding, a large number of processes/threads will have the problem of high memory occupation and CPU consumption, and many services are transformed and refactored to reduce costs and increase efficiency.

A process can be associated with multiple threads, and the threads will share some resources of the process, such as memory address space, open files, process base information, etc. Each thread will also have its own stack and register information, etc. Threads are lighter than processes, while goroutines are lighter than threads, and multiple goroutines will be associated with one thread. Each goroutine will have its own stack space, so it will also be more lightweight. From process to thread to goroutine, it is actually a process of continuous sharing to reduce switching costs.

Distribution of goroutines in the process memory space

A goroutine is essentially a function that can be suspended and resumed. When a goroutine is created, a section of space is allocated in the heap of the process, which is used to store the goroutine stack area, and then copied from the heap when the goroutine needs to be resumed to restore the runtime state of the function. 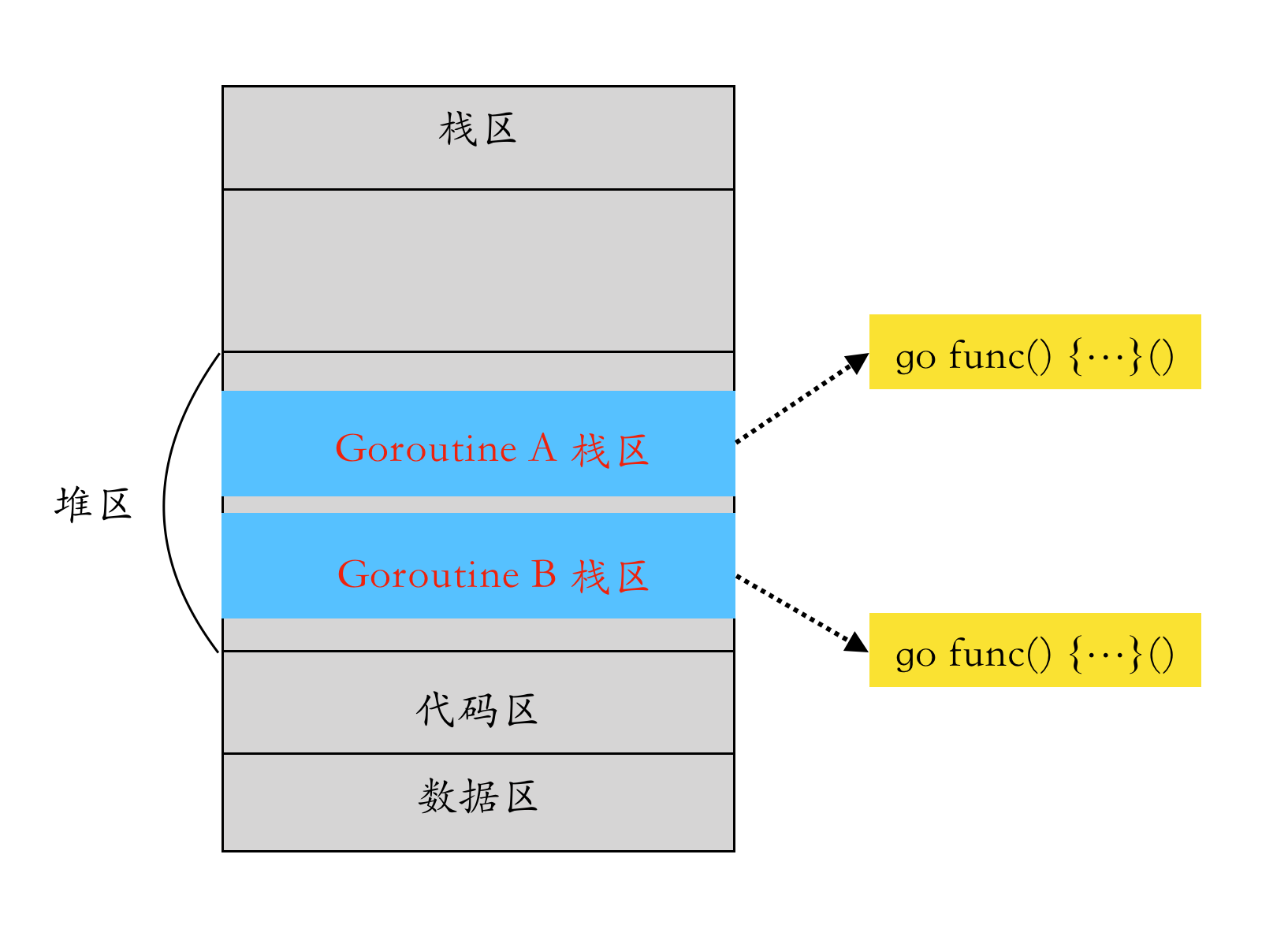 The commit history of Golang code shows that a lot of code is translated from C to Go. A lot of the code in the runtime before go 1.4 was implemented in C. For example, many of the scheduling-related functions implemented in the current version of proc.go were originally implemented in C, but later translated in Go code. If you need to know the details of Golang’s original design, you can look at the earliest C code commits.

This article focuses on the current GPM model in the scheduler, starting with an understanding of the roles and connections of the three components of the GPM model.

G needs to be bound to M at runtime, and M needs to be bound to P. M is not equal in number to P. This is because M gets caught in system calls or blocks for other things while running G. New M is created in runtime when M is not enough, so the number of M may grow as the program executes, while P stays the same without user intervention, and the number of G is determined by is determined by the user code.

The connection between the three GPMs is shown below. 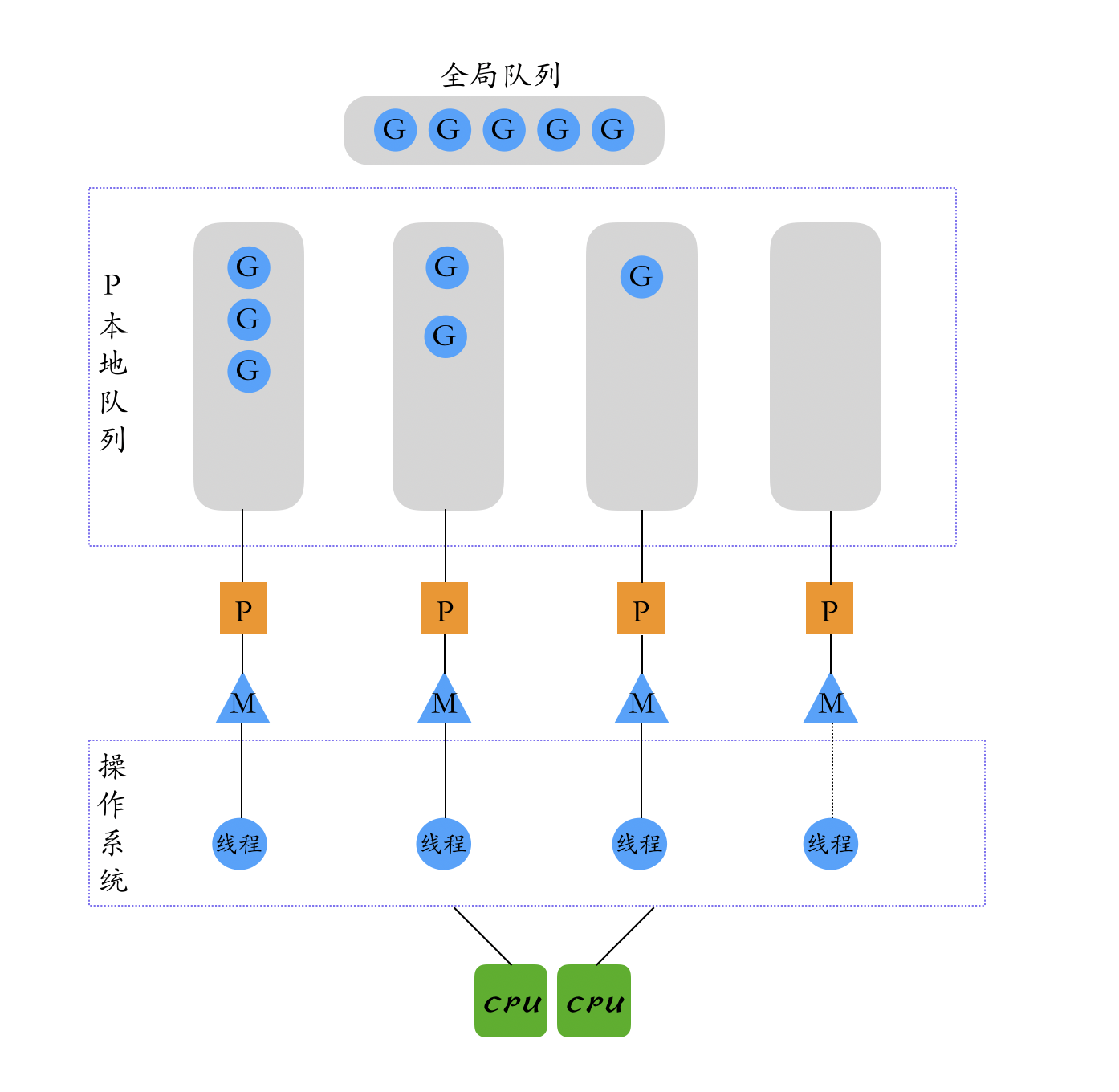 The structure of the P object is shown below.

The documentation lists 4 main issues with the scheduler, mainly

In the IO-intensive scenario, the number of P can be adjusted appropriately, because M needs to be bound to P to run, and M will fall into the system call when executing G. At this time, P associated with M is in the waiting state, if the system call never returns, then the CPU resources are actually wasted during this time waiting for the system call, although there is a sysmon monitoring thread in runtime can seize G, here is to seize P associated with G, let P rebind a M to run G, but sysmon is periodic execution of seizure, after sysmon stable operation every 10ms to check whether to seize P, the operating system in 10ms can perform multiple thread switching, if P is in the state of the system call there is a need to run G, this part of G is not executed, in fact, CPU resources are wasted. In some projects, we can see the operation of modifying the number of P. The open source database project https://github.com/dgraph-io/dgraph adjusts GOMAXPROCS to 128 to increase the IO processing power.

If GOMAXPROC is not adjusted during the program run, unused P will be placed in the scheduler’s global queue schedt.pidle and will not be destroyed. If GOMAXPROC is turned down, p.destroy() will reclaim the excess P-associated resources and set the P state to _Pdead, while there may still be M objects associated with P, so P objects will not be reclaimed. 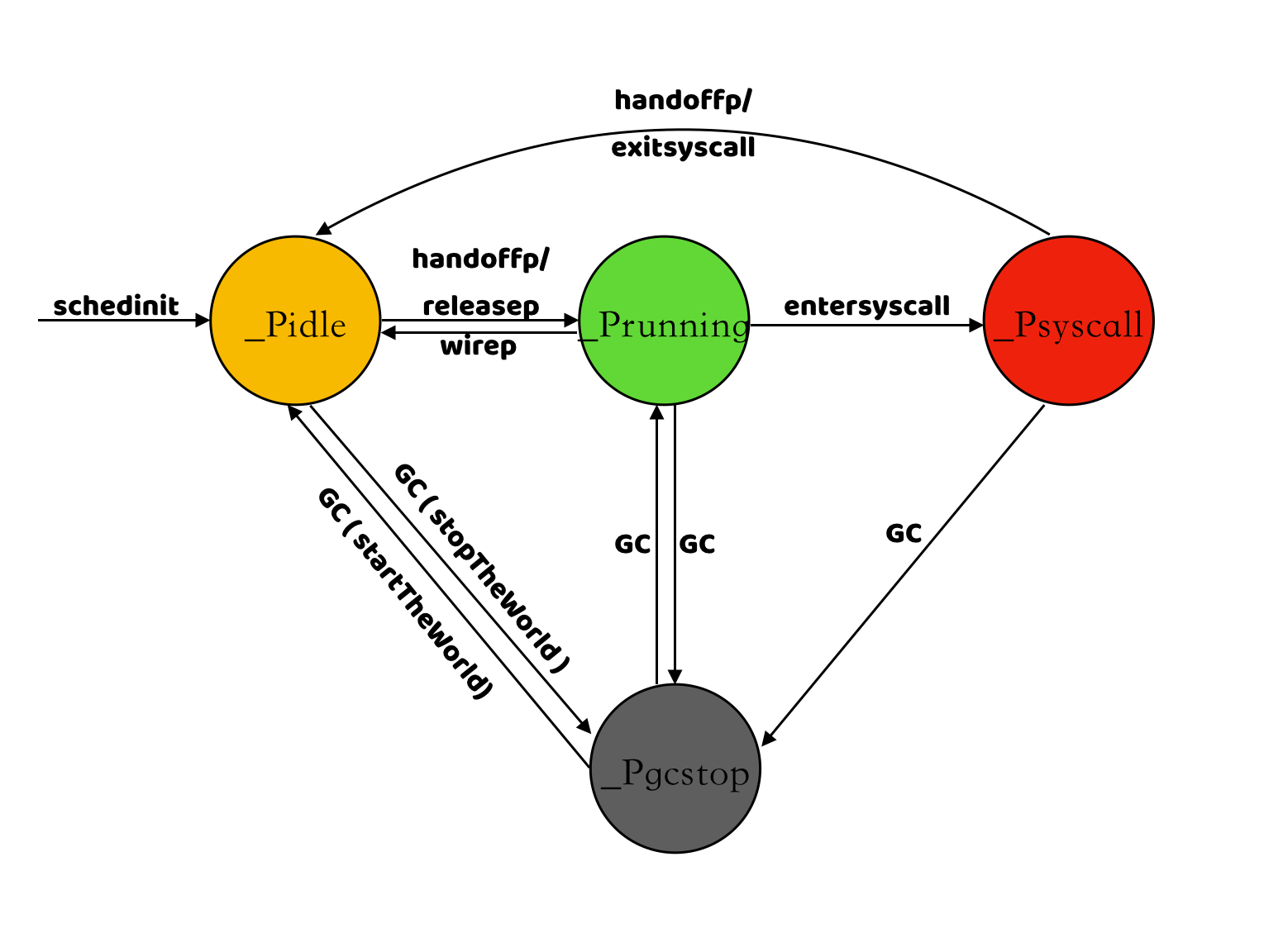 The structure of M object is as follows.

New M will be created in the following two scenarios.

The stopm() function puts the sleeping M into the global idle queue (sched.midle).

M needs to be associated with P to run, and M has affinity with P. For example, when executing the entersyscall() function to enter the system call, M will actively unbind with the current P. M will record the current P in m.oldp, and when executing the exitsyscall() function to exit the system call, M will preferentially bind the P in m.oldp.

(4) What is the role of M0 and how does it differ from the M associated with other threads?

M0 is a global variable defined in src/runtime/proc.go, M0 does not need to allocate memory on the heap, all other M’s are objects created by new(m) and their memory is allocated from the heap, M0 is responsible for performing initialization operations and starting the first G, the Golang program will start M0 first, M0 and the main thread are bound. M0 is bound to the main thread, and when M0 starts the first G, the main goroutine, it functions just like any other M.

Golang added a limit on the number of M’s in version 1.2 (runtime: limit number of operating system threads), the default maximum number of M’s is 10000, and in In version 1.17 the scheduler was initialized with a default value set in the schedinit() function (sched.maxmcount = 10000).

Why limit the number of M’s? In the article on refactoring the scheduler Potential Further Improvements, Dmitry Vyukov has already mentioned the need to limit the number of M’s. In scenarios where there is high concurrency or a large number of goroutines are repeatedly created, more threads are needed to execute the goroutine, and too many threads can exhaust system resources or trigger system limitations that can cause program exceptions. The kernel also consumes additional resources when scheduling a large number of threads, so limiting the number of M threads is mainly to prevent unreasonable use of the program.

The default size of each thread stack on Linux is 8M. If 10,000 threads are created, 78.125 G of memory is required by default, which is already a very large amount of memory usage for ordinary programs.

Through the analysis of the new and destruction process of M, M has three states: running, spin, and sleep, and the transitions between these three states are shown below. 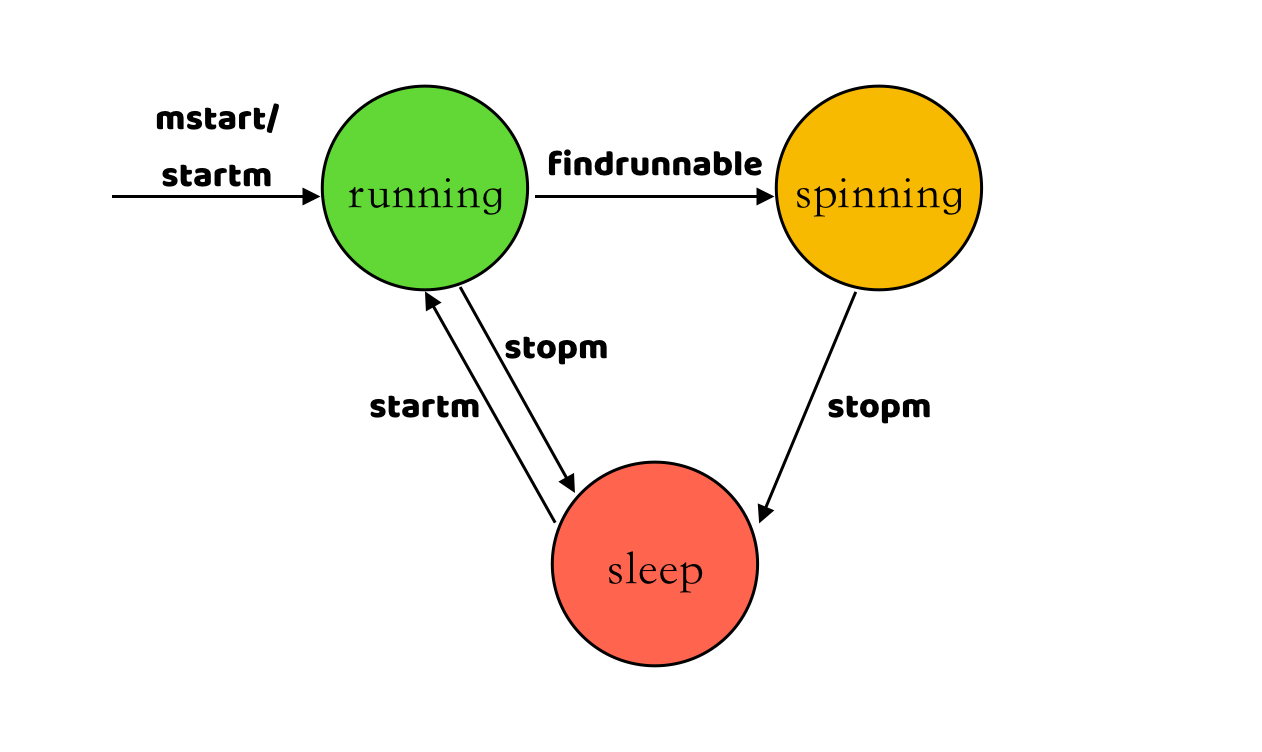 The structure information of G is shown below.

When a Golang program starts, the main thread creates the first goroutine to execute the main function, and a new goroutine is created if the user uses the go keyword in the main function, and the user can continue to create new goroutines in the goroutine using the go keyword. goroutines are created goroutines are created by calling the newproc() function in the golang runtime. The number of goroutines is limited by system resources (CPU, memory, file descriptors, etc.). If there is only simple logic in a goroutine, it is theoretically fine to have as many goroutines as you want, but if there are operations such as creating network connections or opening files in a goroutine, too many goroutines may result in reports such as too many files open or Resource temporarily unavailable and so on, causing the program to execute abnormally.

G is bound to M to run, and M needs to be bound to P to run, so theoretically the number of running G at the same time is equal to the number of P. M does not keep the state of G. G keeps the state in its gobuf field, so G can be scheduled across M. After M finds a G to run, it switches from the g0 stack to the user G’s stack to run via the assembly function gogo().

The states of G are defined in the src/runtime/runtime2.go file. There are three main types of states, one is a few states when the goroutine is running normally, then the ones related to GC, and the remaining states are unused.

The role of each transition state and the relationship between the states are shown below. 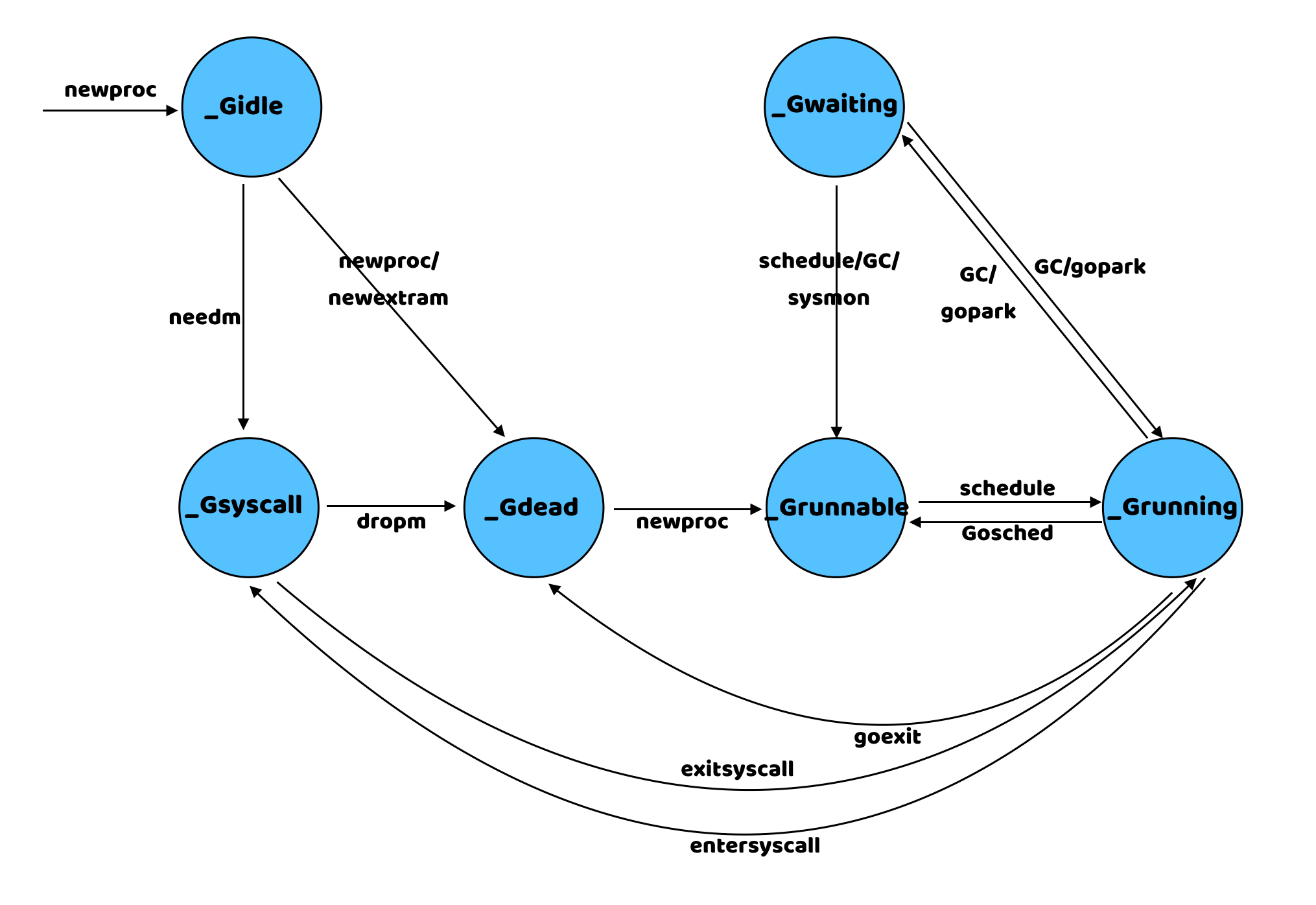 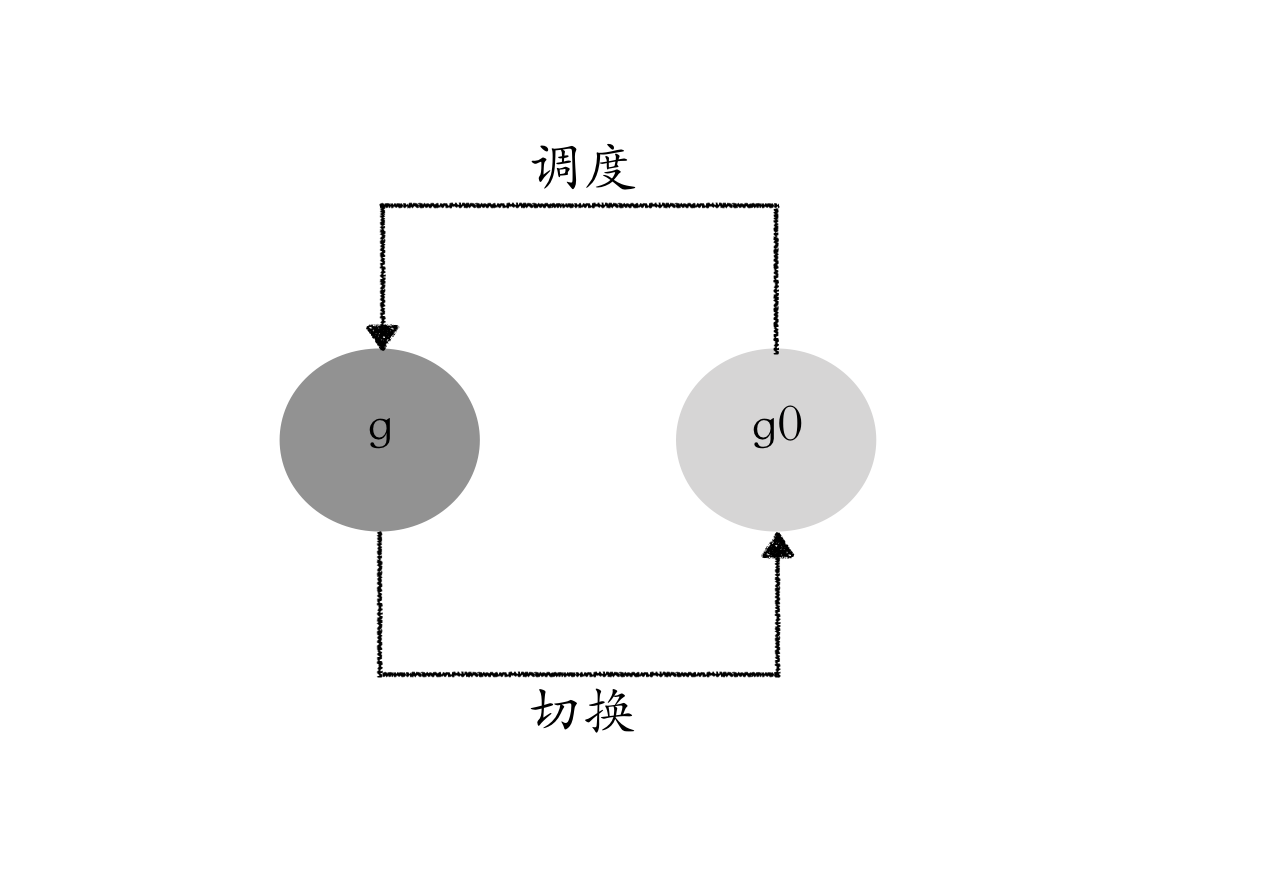 Many functions in the runtime code are called through the systemstack() function when they are executed. The role of the systemstack() function is to switch to the g0 stack, then execute the corresponding function and finally switch back to the original stack and return. In principle, as long as a function has nosplit this system annotation will need to be executed on the g0 stack, because the addition of nosplit compiler in the compilation will not be inserted in front of the function to check the stack overflow code, these functions in the execution of the stack overflow may cause, and g0 stack is relatively large, in the compilation if each function in the runtime to do stack overflow check will affect efficiency That’s why we cut to the g0 stack.

This article mainly analyzes the Golang GPM model. In the process of reading the runtime code, we found that there are many details in the code that need a lot of time to analyze, and only some simple explanations of the general framework are given in the article, and some details are brought in by the way. In the later articles, many details will be analyzed again.