Why should we consider the problem of synchronization? In many cases, we need multiple processes or threads to cooperate with each other to complete a task, and multiple serial programs may all have to access a shared resource, or pass some data to each other. In this case, we need to coordinate the execution of the programs. The role of synchronization is to avoid possible conflicts during concurrent access to shared resources, as well as to ensure the orderly passing of information.

Whether it’s multiple CPUs, multiple processes or multiple threads, as long as there is data sharing between them, synchronization issues are bound to be involved.

To get a better idea of the synchronization problem, let’s illustrate it with a counter example. Suppose that thread A creates a counter Count with an initial value of 1, which is shared with thread B. Thread A and B perform the same task concurrently: query the database for the eligible data and write it to . /temp file. The task flow is roughly as follows.

Note: Assuming the above example is running on a single logical processor, thread scheduling may be slightly different for multi-core processors.

Threads A and B repeat the six steps above each time they migrate the specified data set. However, since the kernel switches and schedules threads, in practice, threads A and B may be executed interleaved and at a much smaller granularity than the steps described above for context switching. However, for the sake of clarity, we can assume a possible thread scheduling process.

The scheduling process is shown in the following diagram. 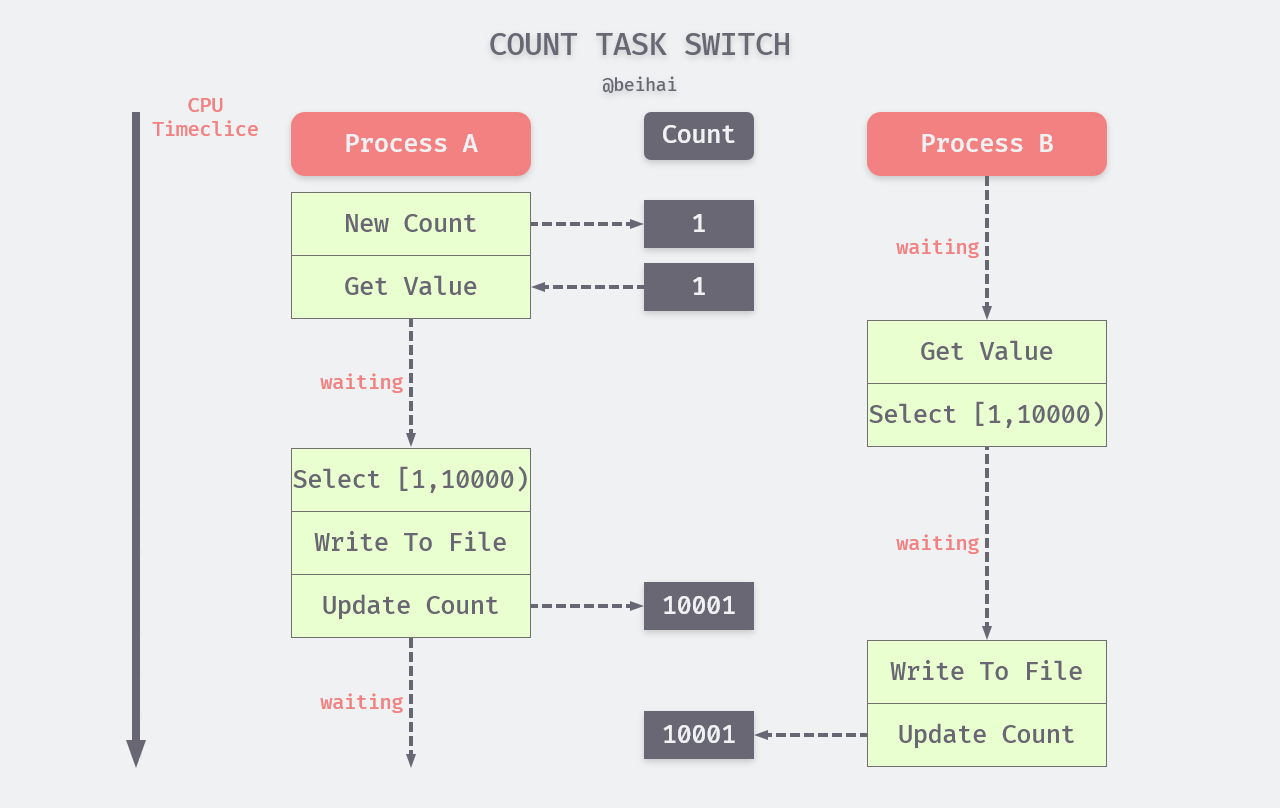 The example diagram shows an obvious problem where threads A and B are doing duplicate things, resulting in double the resource consumption while getting the same result. This is due to the fact that the access time span of the counter value by the same thread is too large, and the counter only achieves the purpose of recording the task progress without task coordination for multiple threads, resulting in a completely random execution process for the threads.

If we improve the counter by moving the fifth step in the process to after the first step, i.e., update the counter immediately after fetching the counter value. This does have a significant effect and greatly reduces the probability of the “half-measure” problem, but it still does not solve the problem completely. There is still the possibility that the CPU will switch the thread before the counter value is updated. 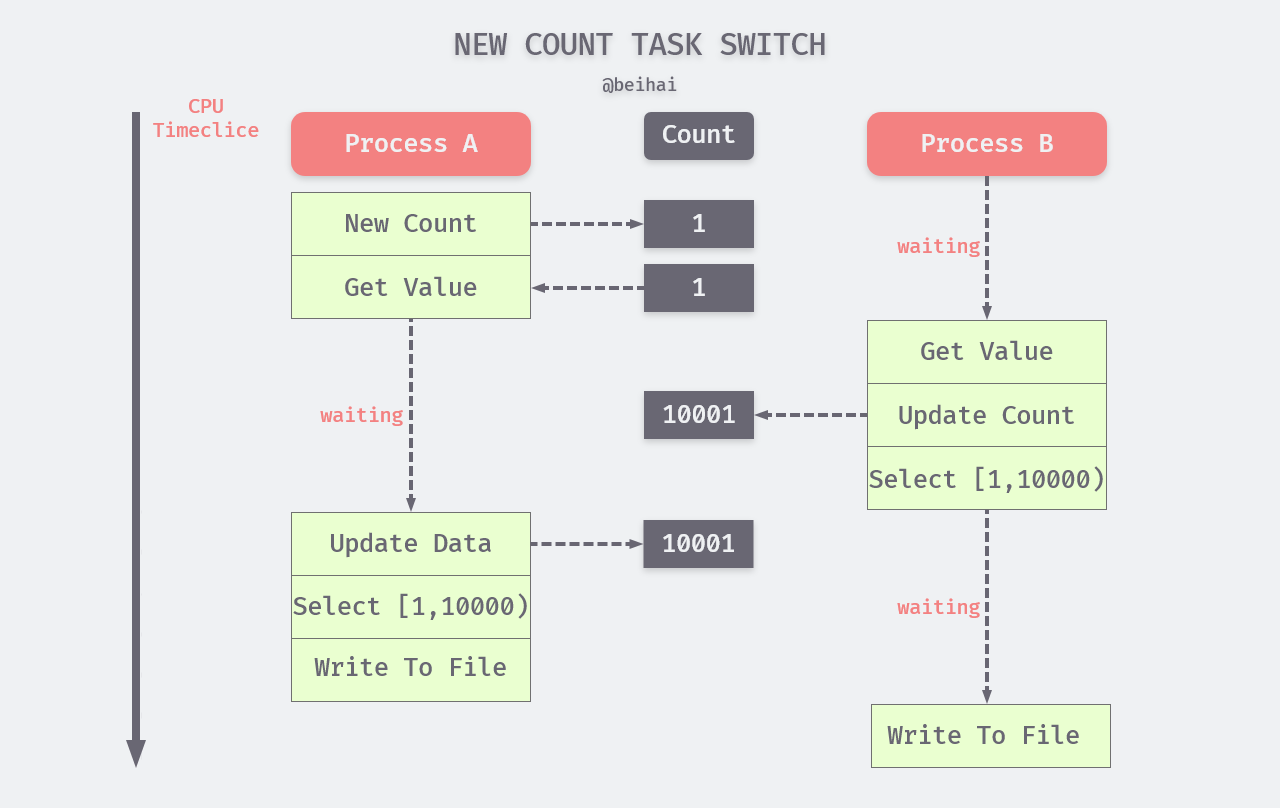 In concurrent programming, multiple threads accessing the same resource may interfere with each other, a situation known as a contention condition. The root cause of a contention condition is that a thread is interrupted in the middle of some operation, and although the thread will resume its state as before when it runs again, the external environment may have changed in the intervening time. In the improved counter example, the uncontrollable nature of thread scheduling makes it possible for a race condition to occur, although it has been avoided as much as possible. To solve this problem, we introduce the concepts of atomic operations and critical zones.

Atomic operation means “an operation or series of operations that cannot be interrupted during execution”. Atomic operations must be represented by a single assembly instruction and need to be supported at the chip level, so they are the most fine-grained synchronous operations for interacting with data between threads, and they guarantee atomicity and absolute concurrency safety for reading and writing a value between threads. Atomic operations perform only the most basic functions, of which there are five: increment or decrement, compare and swap, load, store, and swap .

A mutex is essentially a lock that is placed on a shared resource before it is accessed, and released when the access is complete. After we lock the mutex, any other thread that tries to lock the mutex again will be blocked until the current thread releases the mutex. If more than one thread blocks while releasing the mutex, then all the threads that tried to lock the mutex before become runnable, and when the first thread that becomes runnable locks the mutex, the other threads can only block again. In this way, only one thread at a time can execute the code in the critical zone.

A mutually exclusive lock is a sleep-waiting type of lock. For example, on a dual-core machine there are two threads (thread A and thread B) running on Core0 and Core1 respectively. Suppose Thread A wants to get a lock on a critical zone through a mutual exclusion lock operation, and the lock is being held by Thread B, then Thread A will be blocked. If the mutually exclusive lock does not get a lock, Thread A will go to sleep and Core0 will perform a context switch to put Thread A in the wait queue, so that Core0 can run other tasks (e.g. Thread C) without having to wait.

A spinlock is a busy-waiting type of lock. If thread A uses a spinlock operation to request a lock, then thread A will stay busy waiting on Core0, repeatedly checking the lock with lock requests until it gets the lock. As you can imagine, when a processor is in a spin state, it cannot do any useful work, so spin locks do not make sense for single-processor non-preemptible kernels. Spin locks are mainly used in cases where the critical area locking time is very short and CPU resources are not strained, while mutual exclusion locks are used for operations where the critical area locking time is longer.

There are two common ways to solve deadlocks, one is fixed locking order , which locks a before locking b. While this is effective in avoiding deadlocks, it is not possible in all cases. The other way is try-lock-back, which actively releases the first locked resource when the thread fails to try to acquire the second exclusive lock.

Conditional variables are usually used in conjunction with mutually exclusive locks. This is to deal with the situation where thread A wakes up thread B before it has called pthread_cond_wait but has not yet entered the wait cond state. If a mutex lock is not used, this wakeup signal will be lost. When a lock is added, thread A is unlocked after it enters the wait state, and thread B can only wake up after that.

Synchronization is a solution to the problem of “interference” that can occur during data sharing, often through (pseudo) atomic operations or locking. These traditional solutions have different scenarios and should be used with care, following the principle of using simple operations whenever possible.